October 3, 2022
Get the news and events in Victoria, in your inbox every morning.
Thank you! Your submission has been received!
Oops! Something went wrong while submitting the form. 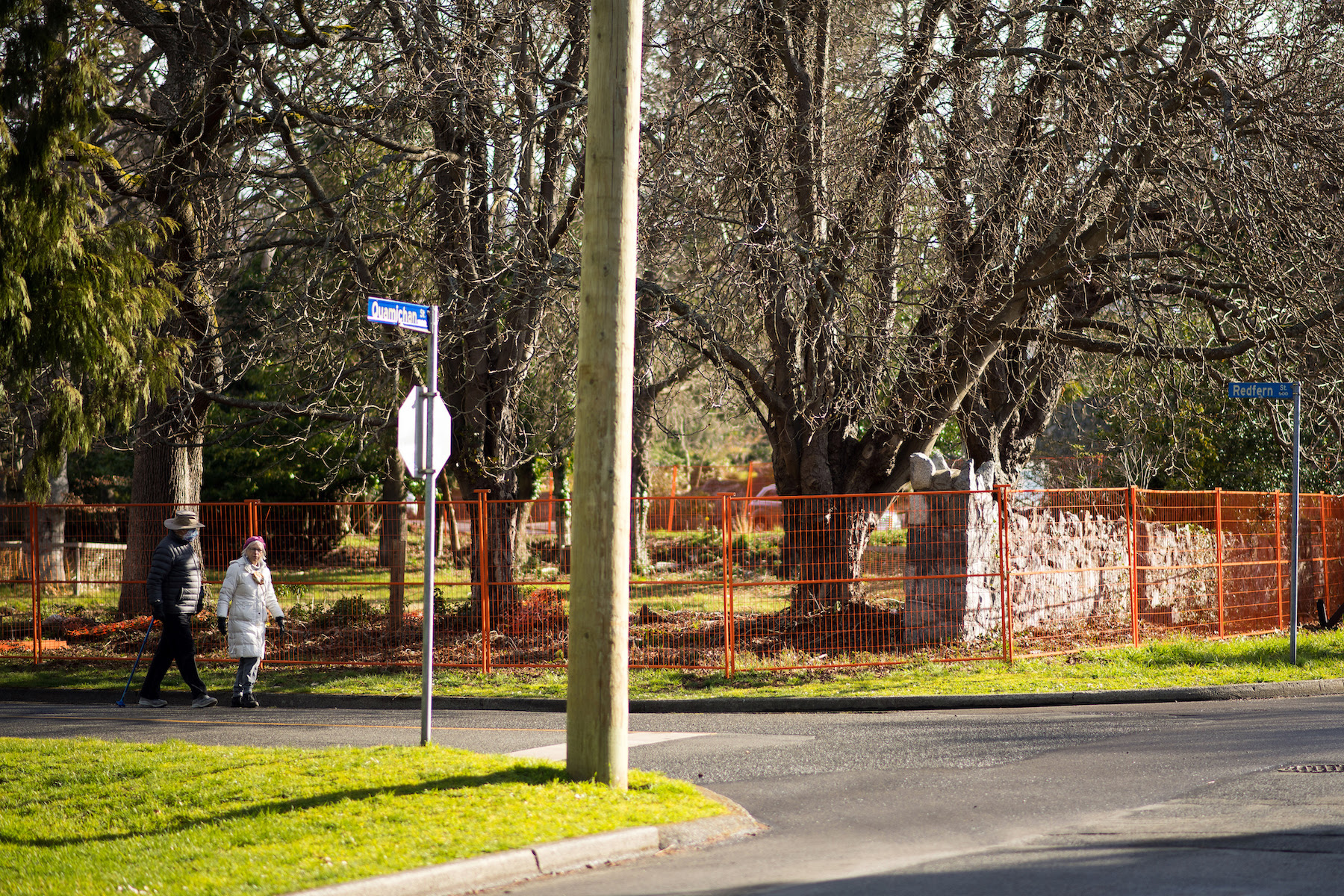 The proposal to redevelop a vacant site into 18 townhouse and a playground was approved at Thursday’s council meeting by a vote of 7-2. The heritage estate has been vacant since 2016 when a fire destroyed house on the half-acre property. The Aryze Developments proposal received considerable pushback from neighbours, who have cited concerns the project would increase traffic, require the removal of mature trees, and fail to adequately address affordability issues. Mayor Lisa Helps argued that the slow approval process made the project less affordable and illustrates a larger problem.

Read more at Capital Daily on the approval, the process, and the objections.

More streets in Victoria will soon have a maximum speed limit of 30km/hr as council granted final approval to a bylaw change reducing the default speed limit on residential streets across the city. The changes won’t take effect immediately; city staff will be working with neighbourhood associations and school districts to identify priority areas for reducing speed limits before rolling the policy out more broadly.

Coun. Ben Isitt moved a motion to pass the report done by MNP along to the upcoming council on the grounds that it will be in “a more appropriate spot” to consider those recommendations than the current outgoing council. That original motion would have had the report back before council in Nov. 2022; Lisa Helps counter-proposed Feb. 2023, and there was some discussion. Most councillors agreeing the new council should have some time to settle, and Jan. 2023 was chosen.

The governance review was one of the key issues, along with housing densification and homelessness, debated on the Sunday before last by Victoria mayoral hopefuls Marianne Alto, Stephen Andrew, and Brendan Marshall. Capital Daily facilitated that debate, put on by the Victoria Downtown Residents Association. Read a recap, or watch the full video, here.

Check out our municipal candidate database to learn more about your candidates in their own words.

Last week, council gave first and second reading to a zoning bylaw amendment for a craft nano brewery to operate at 1209 Lyall. The owners of Howl Brewing, Daniel van Netten and Alayna Briemon, are Esquimalt residents and currently operate the business in North Saanich. In their bylaw amendment application, they said that though they like North Saanich, they “would like to bring the business closer to home.”

The brewery would not serve as a retail location, and would ship products from the site between 8am to 6pm, Monday to Friday. 1209 Lyall is currently zoned for a mixed use commercial and residential property, and the bylaw amendment would allow for beverage manufacturing. The amendment will be going to public hearing at a later date.

A small mid-rise last week, a large mid-rise this week

Council also gave first and second reading to a zoning bylaw amendment to allow a five-storey, 19-unit residential development at 734 Sea Terrace; this proposal will also go to public hearing later. At least two of these units would be three-bedrooms, and the proposal includes one car-share vehicle, 15 car parking stalls, 29 vehicle stalls, and an outdoor terrace for residents to use.

Council will consider implementing residential parking zones on sections of Bewdley and Joffre. They will also decide on awarding contracts for bike lane design at Tillicum and Lampson, and improvements along Lyall Streecarbont—including surface work and replacing sewer mains.

Peninsula councils: The future of local carbon use, accessibility on the peninsula… and someone’s fence

Central Saanich is asking the CRD to develop a carbon budget—which is exactly what it sounds like: a budget determining how much carbon each municipality can “spend” in the form of emissions. It would be modelled after Edmonton’s similar move.

The district is also banding together with North Saanich and Sidney to develop accessibility regulations and plans, in line with the province-wide Accessible BC Act, based on a recommendation by the municipalities’ joint committee for accessibility. Their work may be funded by provincial grants.

This will be the last meeting of Central Saanich’s current council before a new one is sworn in. Council won't be considering any rezoning applications or other major business at this final meeting. Similarly, the only item facing the Board of Variance on Thursday is a variation requesting 90cm of extra height for a fence.

To learn more about your local council meetings, and find out how and when to participate, check out our full list of municipal schedules and meeting links.

Sooke’s new draft of an Official Community Plan has officially been postponed for the next council to take up. The draft was first presented in April, and a spirited community debate has ensued over the past five months. At the end of a five-hour public hearing on Sept. 27, council unanimously voted to close the public hearing, but not receive the document for a third reading. The next elected council will decide how to proceed. Once a public hearing has been closed, council members cannot receive new information from the public on the issue.

Council has allowed a family with a plan to subdivide a property into three to not pay the cash in lieu requirement for a would-be trail on the property corner. The trail is sketched out in Sooke’s Parks and Trails master plan, but the landowner argued that due to riparian protection areas it will likely never be built.

Some background on all of these items and other Sooke business in this rundown.

Dispute erupted at a public hearing for developer Seacliff’s application to adjust its plans for zoning boundaries in the upcoming Royal Beach subdivision. The Royal Bay Homeowners’ Association and other current residents came to council with a broad swath of disputes built up over years, including over one councillor’s receipt of a $200 election contribution from Seacliff’s Seacliff’s director of development.

Read the full story at The Westshore.

A similar topic arose when Coun. Doug Kobayashi recused himself from one of two votes on Olympic View golf course due to a $200 contribution he got in 2018 from one of its affiliates. Receiving personal donations does not require recusal. Olympic View was applying to add 124 apartments to the future development of 456 detached houses and townhouses that it was approved for 20 years ago, and offered a $809k community amenity contribution in exchange.

Read more on that story here.

Westshore candidates have a higher rate of home ownership than average–but are younger than candidates elsewhere in Greater Victoria. Read more analysis from our candidate response database here.

By Zoë Ducklow, with Cam Welch

For the latest from Oak Bay as its council wraps up its last meeting before the election, check out Oak Bay Local.