October 9, 2021
Get the news and events in Victoria, in your inbox every morning.
Thank you! Your submission has been received!
Oops! Something went wrong while submitting the form. 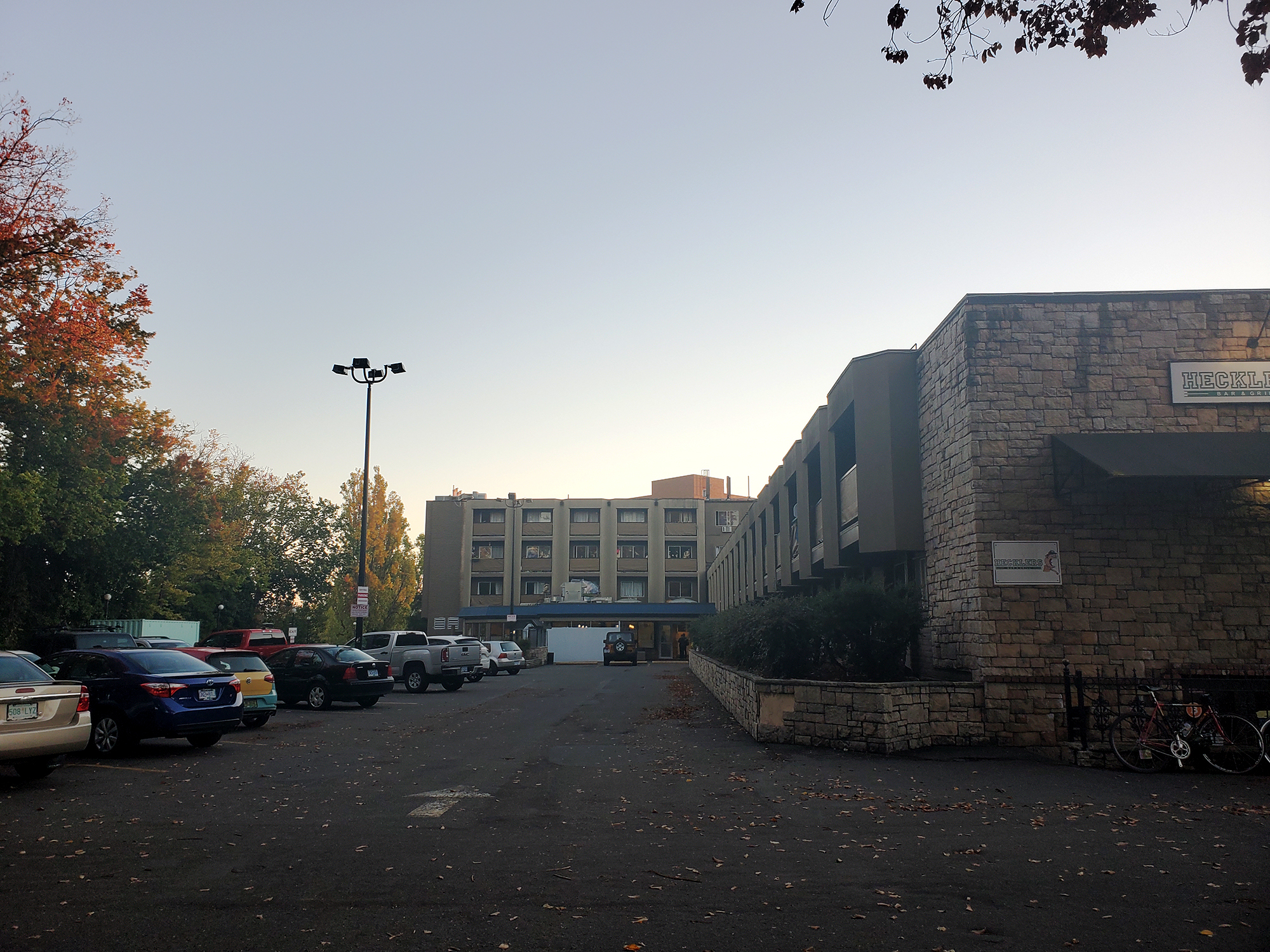 Jordan celebrated when they heard the announcement last week of 50 beds being set up for those who are unhoused and COVID-positive to isolate. But, then, they actually saw the space being set up in the Travelodge on Gorge Road East.

Jordan, who is closely familiar with the situation but spoke to Capital Daily on condition of anonymity, said there are currently dozens of empty rooms available at the Travelodge, and yet several isolation pods are instead currently being set up in an old conference room on the main floor of the hotel.

The wooden cubicles contain just a single mat. There is no bathroom adjacent to the room, Jordan said, meaning that those isolating will have to head into a communal area to use the facilities. Those bathrooms do not have showers, however; Jordan has not yet heard a plan for how people isolating will shower.

There is concern from other occupants of the building, meanwhile, about the isolation sites and the potential for transmission. Only an estimated 30% of unhoused people have been vaccinated, according to Island Health chief medical health officer Dr. Richard Stanwick.

Last week, after COVID had been circulating in the unhoused community for a month, Island Health, BC Housing, and the City of Victoria announced 50 isolation beds would be coming to Victoria; 30 would be in existing shelter and housing facilities, while the other 20 would be in a new location expected to open at the beginning of November.

The pods being set up at the Travelodge make up just a small portion of the total isolation beds being offered across the city. But many of the beds that are currently available are the same cubicles as those in the Travelodge.

“It’s better than nothing,” Jordan said. Last week Capital Daily reported that unhoused people were struggling to find anywhere at all—even a tent—to self-isolate. “It’s better for those who are homeless and seeking shelter; they should have some option. But I don’t think it’s adequate—like, people need some privacy and just a little bit more comfort than that provides… Even just being able to [turn the lights off and on] when you want to go to sleep. People who are sick want to sleep more. The fluorescent lights in this shared room are going to be on all day and people can’t rest.”

In a statement on Thursday, Island Health said that people accessing temporary beds will have access to 24/7 supports provided by a variety of different organizations, including mental health and substance use support, overdose prevention, and health monitoring by non-regulated care providers.

Food and meals, Island Health said, have been supported by generous community members, while some of the isolation spaces will be furnished with leftover pods from the Save-On-Foods Memorial Centre shelter.

The health authority has not confirmed where the isolation spaces are, citing privacy. However, Mayor Lisa Helps said last week that several beds have been opened at a sobering facility on Cook Street, and there are also extra beds available at Royal Jubilee Hospital for people who are unhoused and need medical attention.

But as has been the case since COVID began sweeping through Victoria’s supportive housing facilities and unhoused community, a lack of resources is straining already overstretched outreach teams, while a lack of information is causing confusion and fear amongst those who need the help.

While they’re glad Island Health, BC Housing, and the city have finally taken action weeks into the outbreak, Jordan says they’re still missing the point. Jordan wants to see more than what they call “the bare minimum.”

Caitlin Ross, a Victoria occupational therapist, volunteered last week to be redeployed to work in an isolation site. But that one shift, however, raised some red flags: she could not puzzle out what standards were in place regarding the supports available to those in isolation. Ross says she would be more than happy to be redeployed to help at one of these facilities in the future, but in her opinion as an occupational therapist, more quality care and consistency in standards are crucial. This includes everything from mental health support to the ability to do laundry.

“There’s the issue of providing space,” she acknowledged, “but once space is provided, how is somebody actually going to get all of the things done they need to do to survive and to isolate?”

The Travelodge is run by Cool Aid Society, but the workers there are not responsible for those who are in isolation—they will be cared for by a variety of outreach teams in a combined effort between local non-profits and Island Health.

SOLID Outreach is one of the teams involved in supporting isolating unhoused people through harm reduction and overdose prevention. Josh Irvine, SOLID’s human resources director, said this includes ensuring people have access to clean supplies and drug paraphernalia, as well as cannabis products to mitigate addiction issues and withdrawal maintenance. Irvine adds that SOLID also works in partnership with other agencies to get people prescription-based medical pharmaceutical alternatives to the substances that they’re addicted to.

“Our main focus is not to get people ‘sober,’ but to ensure their safety and quality of life,” he said.

Service providers say safe supply is essential during the current outbreak to ensure that the people isolating have access to everything they need so they won’t leave the isolation facility and risk spreading COVID in the community. Throughout the pandemic, the risk of overdose has also increased due to more isolation and an increasingly toxic supply, so creating easy access to harm reduction supplies is critical.

But Irvine says the team is already stretched to their limits and he knows other organizations are also feeling strained.

“The biggest problem that we always run into is always funding... I mean like we couldn’t have enough staff basically,” he said. “There’s so much work that needs to be done. Unequivocally, we could have thousands more people and that would just put a dent in it.”

Sent back to homelessness

Since the announcement of isolation sites, Niki Ottosen says nothing has been relayed to the people living on the streets. Ottosen, who runs the Backpack Project, has been actively supporting the unhoused community, bringing them donated tents, blankets, food, and other supplies. She is glad isolation spaces are opening, but the lack of communication has made it difficult for unsheltered people.

“Nobody knew where the spots were because nobody was communicating to them, and it was causing a lot of fear and stress.”

Irvine said that he and other outreach teams are actively trying to share information with unhoused people, but the challenge is finding everyone.

Those who do have symptoms are feeling ostracized. Without clear information, some are opting to leave places like Pandora Street in favour of outlying areas so they can both isolate better and be left alone.

“Even if they don’t have COVID, if it’s just a cough or sniffles or cold, they’re feeling the pressure from everybody else to stay away from them,” Ottosen says.

This, along with the ban on 24/7 camping, has made it much more difficult for organizations like SOLID to find the people they’re trying to help. Irvine said there is good communication between all the outreach agencies downtown, so they each share information on where people are. But with so much movement, it’s “next to impossible” to get to every person who needs the help and resources.

“So to be able to have proper routes and be able to try and get to every encampment that we can is next to impossible just for the simple fact that they’re constantly being moved by local law enforcement and bylaw,” he said. “It’s a daily struggle to figure out, where are we going to go, where people are camped, and whatnot.”

Some are also wary of the isolation sites, and others don’t want to get tested, Ottosen said. She said that without assurances of where they’re going to go and whether or not they will have supports, some would rather take their chances on the streets. The spaces, Housing Minister David Eby clarified in the press conference announcing the new isolation sites, will not be made permanent.

In a statement, Island Health said that at the end of the isolation period, shelter staff will ensure that any person who wants to be is on the waitlist for supportive housing.