The exterior of Tacofino on March 17, 2020 (David Tesinsky for The Capital).

Capital Daily is part of the Trust Project
latestCOVID
TransportationBusiness
HousingGood News
The exterior of Tacofino on March 17, 2020 (David Tesinsky for The Capital).

March 19, 2020
Get the news and events in Victoria, in your inbox every morning.
Thank you! Your submission has been received!
Oops! Something went wrong while submitting the form. 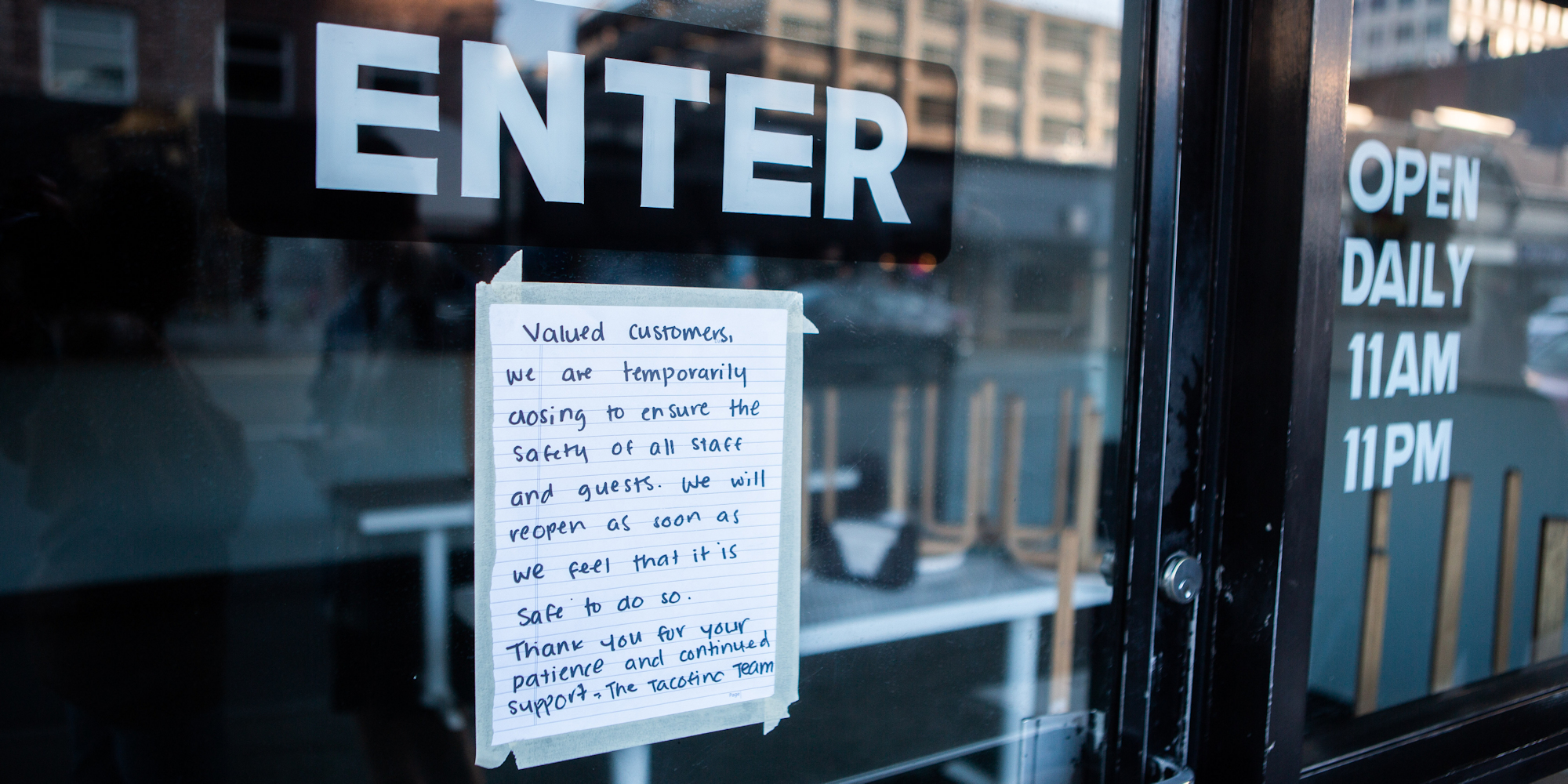 The exterior of Tacofino on March 17, 2020 (David Tesinsky for The Capital).

With COVID-19 closures now expected to last upwards of four months during what is typically the most profitable retail season of the year, many businesses shuttering their doors this week are weighing legitimate fears that they may never be able to open back up.

Two owners of Downtown Victoria brick-and-mortar shops, who asked not to be identified, told The Capital that a sustained closure of little more than a month would mean they couldn’t afford rent and would shut down permanently.

By Wednesday morning, a day after British Columbia announced a public health emergency and imposed forcible closures on the province’s bars, most businesses in Victoria’s downtown core had either closed or imposed strict new  policies to deal with the global coronavirus pandemic.

At Curious Comics, it was possible to browse but there was no leaning or putting  hands on the counter while, at Yellowjacket Comics, a bookseller was meeting customers at the door with their orders.

If you're stuck at home & would like your comics shipped during this difficult time, please contact James at curiousjeeves@shaw.ca - based on what you have we will ship at greatly reduced cost or even free. https://t.co/fYVlQTEFAN #YYJ #YCD #VictoriaBC #Nanaimo 1/2 pic.twitter.com/dVU5jemBQD

At Discovery Coffee at Fort and Blanshard, a row of plates with individual coffee lids were laid out for customers to pick up and put on their own cup, while inside and outside seating was completely removed. At Caffe Fantastico Dockside in Vic West, it was a barista that handled placing lids on cups, and you could still sip a drink or have a sandwich on the patio.

Staff at several stores throughout downtown — who would not speak on the record for fear of jeopardizing their employment — told The Capital their owners were assessing whether to go ahead with business each morning, which meant they were learning about shifts on a day-to-day basis, and that temporary closure was in the cards for almost every local business.

Another was more public about what a short term closure could mean for her business.

“I have to shut these doors temporarily to keep you and my staff all safe,” wrote Michele Shorter, the owner of Odyssey Fitness, a gym in Hillside-Quadra, in a note to customers. “Although canceling or putting holds on memberships may seem important at this time to you, I would encourage you to give this a couple weeks to see how it unfolds before making decisions that could affect the future of our gym. We all want a place to come back to, right?”

Although many closures were made for periods of two weeks, it may be considerably longer before things return to normal. “We’re probably looking at four to six months for this virus to pass through the community,” said Dr. Richard Stanwick, the chief medical officer for Island Health, in an interview with CHEK.

Cruise ship season, a core part of the tourism industry that many retail and service businesses depend on to boost sales for months, was scheduled to begin on April 3 and last until October. At the very least, its impact on local companies will be severely dented in 2020, with the season delayed until at least July 1.

A 2018 report commissioned by Tourism Victoria said there are almost 17,000 jobs that directly rely on the tourism industry in the capital region, with an additional 3,100 jobs indirectly related to supplying the industry. Tourism brought the region $1.2 billion in GDP and $376 million in tax revenues in 2016, according to the report.

One expert said, while public officials are trying to incorporate the interests of local businesses into their plans and messaging, current events have left those interests in conflict with public safety.

“Unfortunately, one cannot separate the public health measures to prevent spreading of the illness from the resultant economic impacts,” said Stephen Hopton Cann, an epidemiologist and clinical professor at the University of British Columbia’s School of Population & Public Health. “Officials are trying to maintain a balance between safety and economic viability, but the recommendations in B.C. are similar to other jurisdictions in Canada and the U.S. which are encouraging greater social distancing.”

While some municipal governments in B.C., Canada and elsewhere have taken unique or preemptive measures to restrict business activity during the outbreak, Victoria has largely been following the line of the provincial government.

FYI, we want you to know that we are doing everything we can to maintain a clean and safe environment for our customers and staff. Beyond that, it’s business as usual with delicious beers, tasty snacks and a welcoming space for you to enjoy. Hope to see you soon!

On Monday, Vancouver Mayor Kennedy Stewart asked provincial officials to close bars and restaurants in his city for St. Patrick’s Day. The same day, Toronto public health officials ordered the closure of restaurants, bars, nightclubs and theatres. Langford unilaterally closed two of its community centres on Monday, and mayor Stu Young publicly urged the closure of local libraries and the cutting of ferry links with the United States.

“We have been following the direction of – and in fact hanging on to every word of – Dr. Bonnie Henry,” said Helps, in an email to The Capital.

It wasn't until Tuesday, when Henry ordered the closure of bars and nightclubs and suggested cafes and restaurants operate dine-in service only if they could provide sufficient distance between patrons, that Victoria saw similar closures. (Late Monday afternoon, at least two major cafes in the downtown core, visited by The Capital, were near capacity with patrons sitting near one another.)

Vancouver, however, has been hit harder by the outbreak. Of the 231 cases of COVID-19 that have been diagnosed in B.C. as of Wednesday, only 16 are in the Island Health region. More than half, 144 of them, are in the Vancouver Coastal Health region.

Helps said her own advice to residents about their daily habits and consumption practices will stay in line with Henry’s updates, which generally take place mid-afternoon each day.

For example, after Henry said last Friday "it's still very safe today in B.C.— all across B.C.—to go out, to go shopping, to go to restaurants,” the mayor echoed Henry’s words a day later, in a blog post, encouraging Victoria residents to support local businesses.

Helps said, while the situation has since changed, she is still encouraging locals to do things to help retail and service industries that are bracing for months of economic disruption, which could include layoffs and closures.

“My advice about how to support local businesses evolved as the situation evolved,” she added. “I’m now encouraging people to buy gift cards. Take out and delivery are also options.”

One bright light in a retail market on the verge of mass layoffs, however, is that the Victoria grocery sector has been chalking up unprecedented sales as people stock up for extended periods of self-isolation. The Uptown Wal-Mart alone saw profits of around $2 million last week, and single-day sales on Saturday of $700,000, according to sources at the store.