March 5, 2021
Get the news and events in Victoria, in your inbox every morning.
Thank you! Your submission has been received!
Oops! Something went wrong while submitting the form. 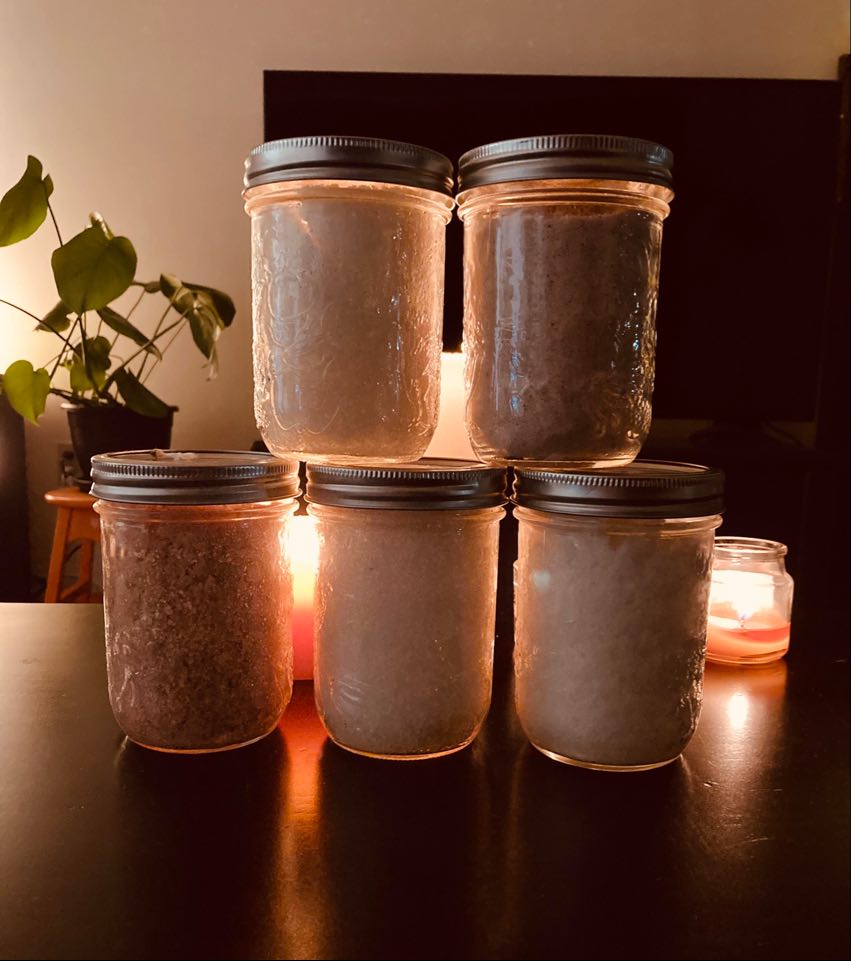 Starting a new business is a daunting endeavor at the best of times, and the pandemic has only further complicated matters. But the stakes couldn’t be higher for Sage Derkatz when she launched her online bath products store last October.

Derkatz’s life turned upside down when her mother kicked her out of their shared home, leaving the 17-year-old unhoused. A friend took her in at first, but Derkatz knew the retail job she worked when not in online high school classes wouldn’t be enough to sustain herself long term. The pressure was mounting, and she had few places left to turn.

Early in her teens, Derkatz’s love of baking had combined with her love of crafting to prompt her first experiments with sugar scrubs, an exfoliating bath product. It wasn’t long before she was churning them out for gifts to family. So now, running out of options to support herself, Derkatz tapped into her skills as a crafter, and Opalescent Scrubs was born.

Derkatz got to work preparing scrubs and crafting facebook advertisements—until it was time to launch.

Within one day of posting her first ad, she received more than 300 messages.

“I was crying out of relief,” she said. “It felt really nice to see all the kind comments and people saying ‘I believe in you.’ I hadn't been hearing that a lot in the past few months and I was really low; that was a real pick me up for me.”

With the support of the Victoria community, Derkatz’s organic bath products quickly became a hit. She fielded between 20 to 30 orders a week in the months leading up to Christmas, selling scrubs and bath soaks in a range of seasonal scents. After hearing her story, community members reached out to help support her through dropping off food, grocery gift cards, and connected her with mental health resources.

“People were actually coming to my house and bringing needed items, because we actually didn't have stuff like toilet paper or a lot of food,” Derkatz said.

“It was overwhelming, but I couldn't say anything more than ‘Thank you,’ I was so shocked by all the support. It felt so good but also it kind of scared me to see how many people actually really cared.”

Thanks to the support for her and her business, Derkatz was able to find her own apartment.

Making scrubs became a welcome distraction from her situation, and a familiar routine.

Derkatz loves to infuse her scrubs with nostalgia. She hits customers with a whiff of peppermint, pumpkin, or her personal favourite, coffee—smells that for her evoke memories and seasonal excitement—when they first open her jars. In the future, Derkatz is looking into making custom orders that might remind someone of a loved one through their favorite scents.

It’s not easy to balance a full-time job, virtual classes, and orders for Opalescent Scrubs, Derkatz said. During the lead up to Christmas, she stayed up until 4 am some nights to finish orders in time to meet the high demand. Now, she says, she’s better at managing her schedule, and the demand has dropped to five or 10 scrubs a week.

“It was really challenging but rewarding,” Derkatz said, looking back on that time. “I like taking on almost more than I can chew, it keeps me busy and I like that.”

Derkatz values adding personal touches to her creations, and none more than in the name of her business itself.

Opals have always carried a special meaning for Derkatz and her mom—a psychic correctly predicted it would be her birthstone before Derkatz’s mother was even pregnant, and it has been a treasured bond between them ever since. By naming her store after the stone, Derkatz wanted to pay tribute to her mom in spite of everything that happened.

“I really wanted to show her that I was okay and that I was going to do better, and that I can do it on my own almost in a way,” she said. “When she saw my business name, I wanted her to think that the opal was a symbol for her.”

Her wish has since come true: her mom found Opalescent Scrubs, and their relationship has since “blossomed,” according to Derkatz. Her mother has even ordered scrubs and shared Derkatz’s ads with friends.

Looking forward, Derkatz is excited for the future of Opalescent Scrubs. Housing security is an issue far bigger than her business, and one she still struggles with. Right now, her focus is finishing Grade 12, but she has hopes of expanding into local stores in the coming months. And in her low moments, she now has a community of people eager to support her.

“I felt so scared when I got kicked out because I didn't know how I was going to be able to support myself, and I just got all of this overwhelming support,” she said. “It's a huge weight lifted off your shoulders when you're good at something that can actually make money.”