Photo by author Harley Gordon of a road blockade in Fairy Creek.
Forestry 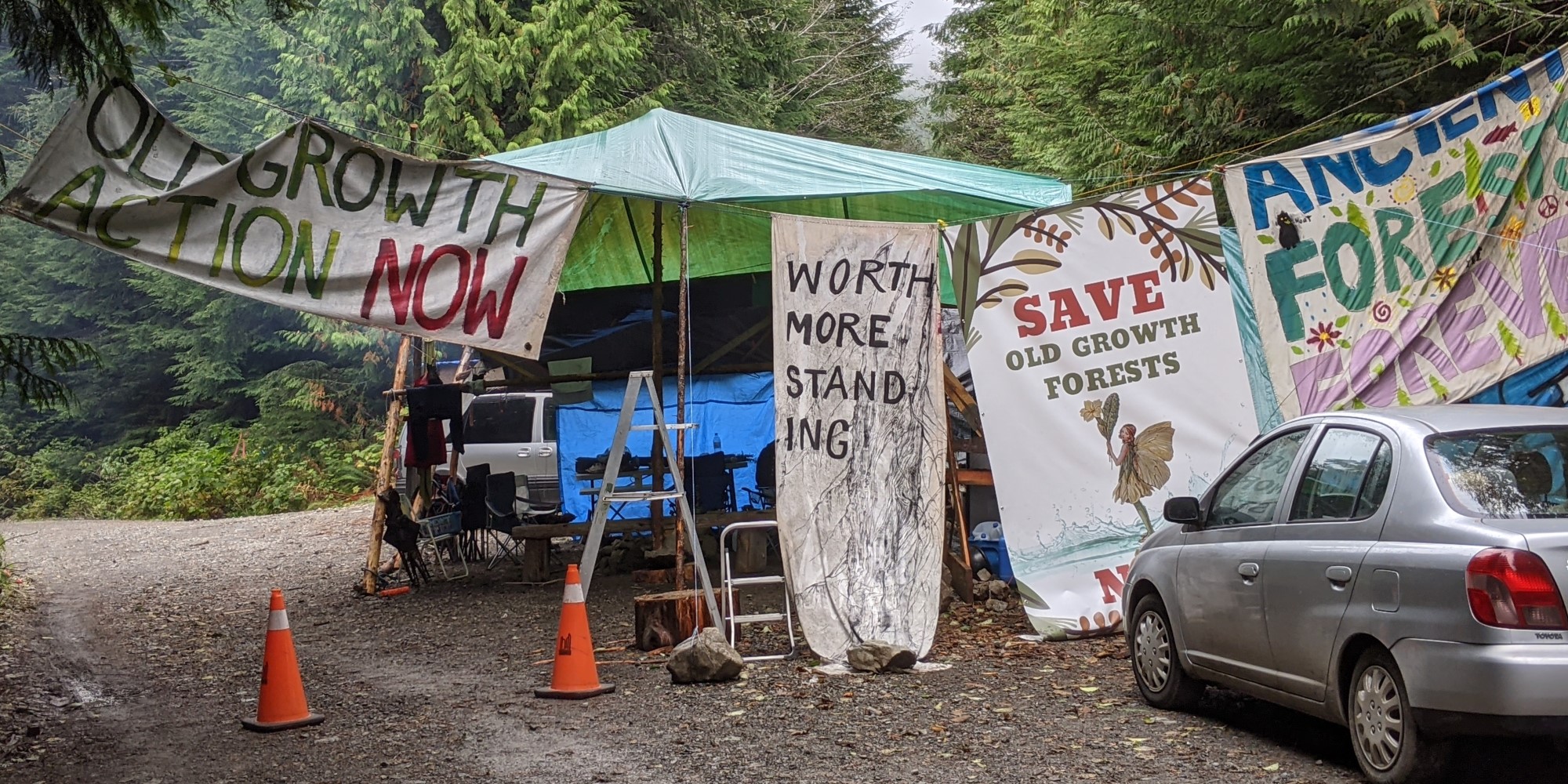 Photo by author Harley Gordon of a road blockade in Fairy Creek.

For more than two months now, an encampment of forest activists have been blockading roads outside Port Renfrew in an attempt to stop planned logging in Fairy Creek, one of the largest unlogged sections of old-growth forest on Vancouver Island. Capital Daily science writer Harley Gordon, a researcher at the University of Victoria’s Centre for Forest Biology, visited the blockade on October 17th. Below are his findings on what’s at stake in Fairy Creek, what activists are pushing for, and how the forestry industry is likely to respond.

Fairy Creek is an old-growth valley near Port Renfrew, and most of it is already protected.

Fairy Creek, which runs through a deep forested valley, is located north of Port Renfrew on the traditional territories of the Pacheedaht First Nation. Containing a blend of centuries-old firs, cedars and hemlocks, the watershed is one of the last large unlogged valleys on Southern Vancouver Island.

One of main reasons the valley remains unlogged is because of one small bird, the Marbled Murrelet. These small seabirds birds have been protected as an endangered species in Canada since 1990. As a result, about one third of the Fairy Creek valley has, by law, been protected from logging to provide suitable habitat for the bird, which nests in ancient forest canopies. This area of Fairy Creek is designated as a Wildlife Habitat Area, which means no roads, no trails, and certainly no logging. However, this designation is managed under the BC Wildlife Act and companies can apply for exceptions.

Another, larger portion of the watershed is protected as an old-growth management area; in essence, an area that isn’t quite parkland, but is protected in perpetuity from logging. Much like wildlife habitat areas, though, exceptions can be made to the protected areas. It is only when land becomes covered by the Parks Act that it becomes explicitly protected from logging of any kind.

Blockades have stopped the logging for now, but the spring could change things

Roughly one third of the valley — the northernmost part — has no protections, and this is the part that spurred the ongoing blockades. When the Teal-Jones Group logging company began building roads into the unprotected third in August, protesters intervened to stop construction. It was a small informal group called the “Rainforest Flying Squad” that formed the core of this first blockade. Some work seasonally, as tree planters for example, which gives plenty of time to participate in blockades when the work season is over.

In early October, Teal-Jones moved its road building equipment out of the area, in part because the onset of wet winter weather had ended the 2020 roadbuilding season. By the spring, blockaders expect to be served with an injunction which could start netting them criminal charges for a protest that, thus far, has come without legal consequences. Activists will either have to comply with the court order and move out of the way, or face arrest and possible jail time.

However, one thing in the activists’ favour is the relative closeness of their blockade to Victoria, as well as a well-funded operation incorporating solar panels, satellite internet, drone monitoring and even GIS surveys of the area. A GoFundMe account set up by protesters has pulled in $25,000 and a steady stream of supplies brought in from town by blockade visitors keeps the camp kitchen well-stocked.

The end goal for the blockade is permanent protection for all remaining old-growth in the Fairy Creek watershed, preferably in the form of a provincial park. Currently, the blockaders are building a trail through the headwater region, preparing a judicial review of the tree license approving the cut and attempting to draw visitors to the area (reportedly, more than 300 have passed through thus far).

In BC, companies compete for Tree Farm Licences; these are long term licences that grant the awardee almost exclusive rights to cut trees from a designated patch of Crown land. Tree Farm Licence 46, which covers the area of Fairy Creek in question, is owned by Teal Cedar Products Ltd. (part of the Teal-Jones Group), and was last renewed in 2012. The license covers 3,828 hectares of harvestable forest more than 250 years old — roughly the size of 3 East Sooke Parks.

This is a license that Teal-Jones has fought hard to maintain, and has even gone against the province (and won) in the Supreme Court of Canada when its licence area was altered.

The Teal-Jones group is a timber products company with humble origins on the West Coast. Originally founded in 1946 in Surrey, the company has grown from a one-man operation to more than 1,000 employees, with sawmills in both Canada and the United States. In their words they “work daily to extract maximum value from coastal timber resources”.

Tree Farm Licences are not free reign to cut everything, however. Within a licensed area there are often protected areas (like much of Fairy Creek) and there is also a maximum annual allowable cut, set by the province, governing the volume of wood that can be removed every year. For the Arrowsmith management region, which makes up the southern half of Vancouver Island, the maximum allowable cut is 348,000 cubic meters of wood every year.

Companies are also subject to a bevy of standards including reforestation. There are patches of second-growth forest available within Teal-Jones’s harvest area, but on average one hectare of second growth forest will yield only about 500 cubic meters of wood (about $190,000 worth by current prices). Log a hectare of old-growth, by contrast, and the yield will be at least 1,500 cubic metres of wood, representing $527,000 per hectare. So for the southern half of the island that’s either 700 hectares of second growth forest clearcuts every year or 232 hectares of old growth. Using our approximate calculations, about $122 million dollars worth of timber is cut from crown land on Southern Vancouver Island each year.

Teal-Jones isn’t doing anything wrong; they are harvesting and selling a product to an international market within the bounds of the current restrictions and legislation. They’re well within their rights to establish roads and cut blocks within the Fairy Creek headwaters, and they plan to cut their allotment of old-growth until it is all gone. What’s more, the company has their license until at least 2027, and it could be renewed after that. While the efforts of protesters stopped any Fairy Creek trees from being cut in 2020, it’s a long shot that they could keep it up for another seven years without some sort of outside intervention.

Environmental activism has shielded some Island forests from the saw, but not always

The most memorable flashpoint between environmentalists and loggers in BC remains the 1993 “War in the Woods” that took place in Clayoquot Sound (between Port Alberni and Ucluelet) in the early 1990s. The deep valleys of that region hold some of the province’s largest trees, and planned logging in the area prompted a protest blockade organized by the “Friends of Clayoquot Sound.”

In response, the company logging the area, MacMillan Bloedel, obtained a court injunction prescribing fines and jail time for anyone interfering with their work. What followed remains the largest act of civil disobedience in Canadian history. Over two weeks 800 people were arrested; every morning the RCMP would stand at the blockade, read the injunction, and arrest anyone who chose to block the road.

Eventually, however,  the NDP government of the time intervened to act on the recommendations made by the Friends of Clayoquot Sound. The annual allowable cut for the area was reduced and by 1995 a provincial park was established in the region. 7,000 hectares of old-growth forest remains protected to this day. Nearby Carmanah Walbran, another ancient forested valley, was also protected in the mid-1990s.

Some of the protesters at Fairy Creek were also at Clayoquot, including Eartha (Esther) Muirhead. She told Capital Daily about being arrested at the 1990s blockade and put under house-arrest for two weeks.

Clayoquot protests would also escalate to include campouts in tree canopies, slashed tires, sabotaged equipment and “tree spiking”; the driving of a hidden metal spike into trees that destroys any saw attempting to cut through it. However, the blockaders at Fairy Creek hope to never let it get that far.

In recent years, Eartha has been involved in trying to protect the Schmidt Creek watershed in the North Island, near Sayward. In that case, the strategy hasn’t been blockades, but filing judicial reviews to have timber licenses reconsidered. So far, however, Schmidt Creek continues to be logged.

The Pacheedaht First Nation, whose traditional territory encompasses Fairy Creek, does not appear to be taking a side

The Pacheedaht nation, though once numbering more than 1,000, now has about 60 members. Hereditary Elder Bill Jones has formally extended his invitation to the blockaders, calling them to join in protecting the land. Jones, no stranger to environmental activism, was instrumental in the protection of Carmanah Walbran in the 1990s

He does not speak for the entire band though, and try as they might, the blockaders have yet to receive a formal invitation from the Pacheedaht band council. The band might even welcome any additional jobs running a local mill for Teal-Jones, says Eartha Muirhead. However, on September 29th, the protesters did get a resolution from the Union of BC Indian Chiefs backing their cause.