October 16, 2020
Get the news and events in Victoria, in your inbox every morning.
Thank you! Your submission has been received!
Oops! Something went wrong while submitting the form. 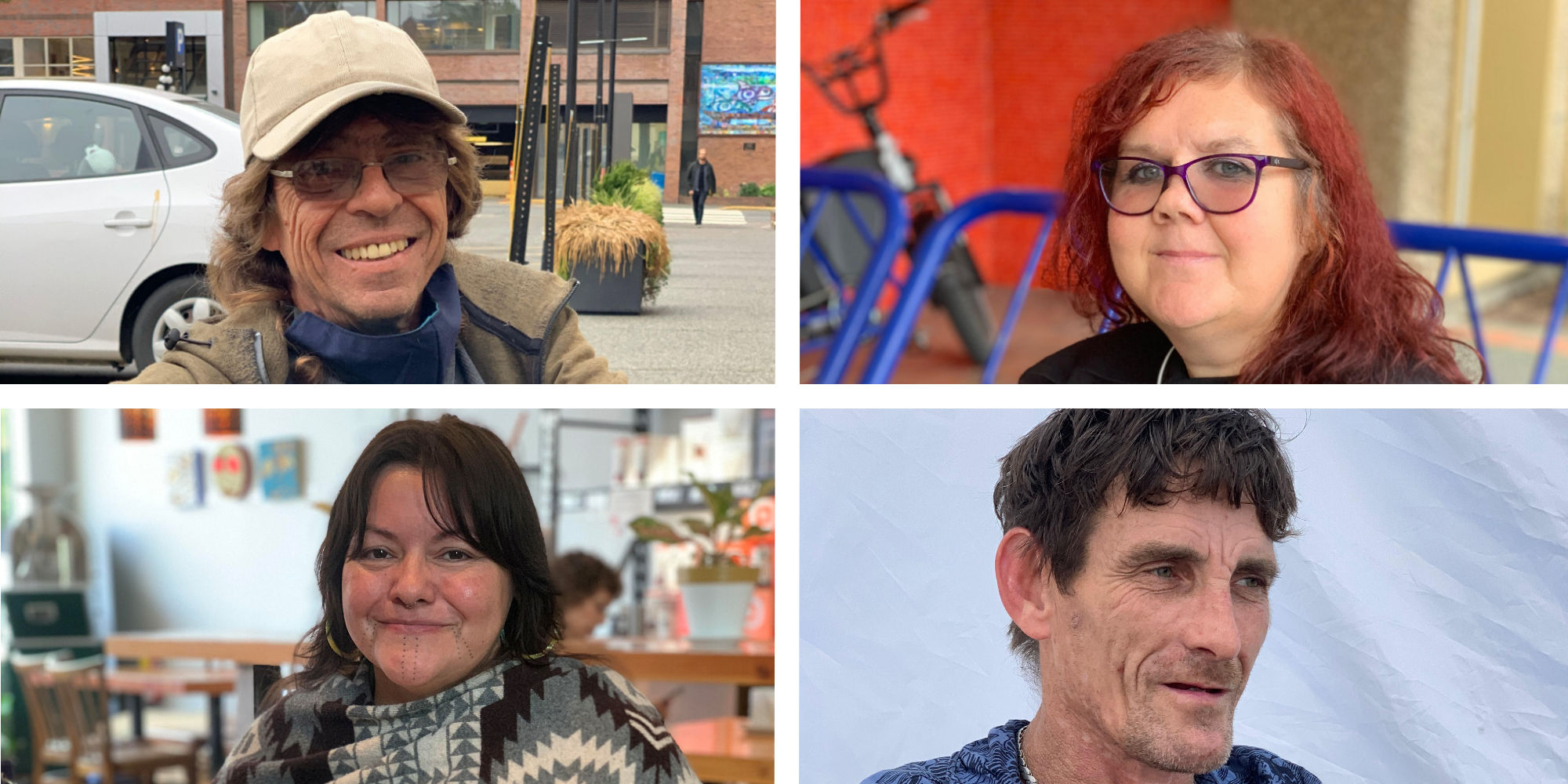 For the next year, Capital Daily will be profiling the same four people in Victoria experiencing homelessness or on the brink of it. Here is the first in our series, and we'll be making our next check-in after Christmas.

Terrance has been homeless, this time, for the past three months. He lives in a one-man tent in Beacon Hill park, 50 feet behind another tent he has set up as a diversion. “People have gotten their tents bashed in here. My decoy tent has a bit of junk in it so it looks occupied, and it can get attacked. There’s a lot of robbing and beating here.” Terrance is not taking any chances because he is in poor health: “Heart disease, bipolar, COPD [chronic obstructive pulmonary disease], alcoholism,” he lists off his issues. And, in 2007 he beat cancer; renal cell carcinoma (he had his kidney removed).

Terrance has lived in Victoria on and off since 2005. In 2005 he worked for 10 months in sheet metal construction and after a pay dispute, walked off the job. Then he left Victoria for Fort McMurray and took on a series of jobs including renovating homes and stocking shelves. Over the years he went back and forth between Fort McMurray and Victoria three times, eventually returning to his native New Brunswick to care for his aunt. When his aunt died and her house was sold, Terrance said  “I had the rug pulled from under me, and I was homeless again.” Without savings and facing an East Coast winter, he decided to head back to Victoria. “I need the weather; I thought—screw it. At least I’ll have some kind of air I can breathe. My heart doesn’t want me to walk through four feet of snow.” Terrance said he applied for a BC Housing-funded hotel room in July but was denied. “Who is more vulnerable [than a chronically-ill man]? An addict can fix their life. There’s nothing that can be done for me.”

Despite the warmer weather, Terrance often wakes up in his tent writhing in arthritic pain—it’s not from the cold, explained Terrance, but the humidity. “It sucks. It’s very damp. I’m sore,” He is currently constructing a system that removes humidity from his tent without the need for electricity using tea lights and using free moisture packets that MEC gives out by the bucket load, “All I need is the humidity out of my tent, otherwise I’ll be dead before Christmas.” But he is most worried about his mental health, “My bipolar is kicking in like you couldn’t believe,” said Terrance whose bipolar symptoms like impulsiveness and anger are increased by the stress associated with his precarious living situation. He fears he’ll snap: “Fuck it—I might just spend 8 months in jail. Something’s gotta give.”

Jimmy, as his friends call him, is currently living in a private rooming house in Rock Bay—but he just gave his notice. He pays $700 a month for his room, and his “old lady” pays $600 for hers; they are not allowed to share a room and this, among other issues, has caused friction between the couple and landlord. “My living situation is up in the air. I’m dangerously close of being homeless again,” said Jimmy but there’s one thing he is clear on: “Everything will be okay, as long as I don’t turn myself into a victim.”

Originally from Windsor, Jimmy has lived in Victoria most of his life. For 17 years, he was drug-free and was an active member of a recovery community which saw him run recovery houses in Surrey. “I lost everything a few years back,” he said, referring to a 2017 workplace accident where he didn’t qualify for compensation and found himself without savings, and eventually a home. He ended up at the Super 8 Motel—a temporary boarding shelter run by BC Housing—where, ironically, his mother had once worked for 30 years as a barmaid when it was the Ingy Bar at the Ingraham Hotel.

For the past three years, Jimmy has returned to active addiction. “It started soft—a little weed and that. Then snowballed into regular usage. I drink a little and I work regularly,” he said, referring to his position at SOLID, the harm reduction-based organization who pays him to man the injection tent at Paul’s Motor Inn.

“I’m amazed at how many talented people are homeless. Not very many have job skills. When you house someone they have to have a way to support themselves; give them skills or opportunity to provide for themselves,” said Jimmy. He feels hopeful that many will find their way. “Recovery is possible even though I’m not fucking clean. All you gotta do is do it.” And on his own situation? “I’ve always known there’s something bigger than me. The way God works for me is at the last possible minute.”

Nancy is reading The Audacity To Be a Queen during the second week of a month-long stay at Eric Martin Pavillion, Victoria’s main public rehabilitation clinic. “The book is about how to communicate properly and stop self-sabotaging yourself—that’s what I do,” said Nancy who has a long history with alcoholism that has seen her on the streets and in jail cells more times than she can count. During rehab, there’s a lot of time to read and reflect on her life choices between counselling sessions, meditation class, and evening group therapy.

Nancy had been homeless for two years on the streets of Victoria until her most recent drinking binge led to entering detox with the aid of a team from the Umbrella Society. “They met me at McDonalds one day and they said: how would you like us on your team? From that moment I didn’t feel so alone.” When Nancy came into contact with the Society, she was recovering from an incident from last winter where she fell asleep in the snow while drunk and got frostbite on her fingers. “I wasn’t even strong enough to get into a tent,” she said.

During her stay, Nancy is receiving comprehensive medical and psychological care including ultrasounds, group therapy, and help with her mobility; she relies on an electric scooter due to crippling degenerative arthritis and chronic pain worsened by hard living such as sleeping along Pandora Avenue or in Victoria’s parks.

At the end of her rehab program, on October 23, Nancy will go straight into supported housing at Our Place Society, and said she is determined to make the most of this opportunity to change: “I’m tired of counting bricks; I’m tired of living like that.”

Isabel is Cree Nehiyaw originally from the Prairies. In 2015, Isabel planned an 8 month "walk" to visit host Aboriginal communities around the country—from coast to coast—starting in Victoria. Just days before her departure, she let go of her room in a shared house and the person she was due to travel with cancelled. Guided by her Creator, as she says guides all of her decisions, Isabel went ahead with her plan and walked from Victoria to Hope where she decided it was no longer safe to travel alone. When she returned to Victoria, her savings were depleted, and she found much of her former support network felt as though they had been abandoned for her project.

As a direct result, Isabel moved into a discreet women's homeless shelter run by Our Place Society for 15 months (to protect the women living in this shelter, its name and location is not publicly known). “I was scared of being on the street. I know First Nations women have a much higher chance of being murdered.” During her time at the shelter, Isabel obtained a certification in Reiki healing and finished setting up A Native Mystical and Spirit Fair that allowed her to save enough money, along with a BC Housing grant, to rent a bachelor apartment in Quadra Village.

During COVID-19, the fair was postponed and Isabel’s grant was in jeopardy—and again, she faced the possibility of becoming homeless again. “We need community,” said Isabel of the current housing crisis. “When a person is homeless, whether they are native or non-native they are viewed as a nonperson, an object to be verbally and physically attacked," she added. “With COVID, hopefully people realize that homelessness is not that far away for most people.”