A homeless man on Government Street before the onset of COVID-19 shutdowns (Anne Catherine for The Capital).
COVID-19 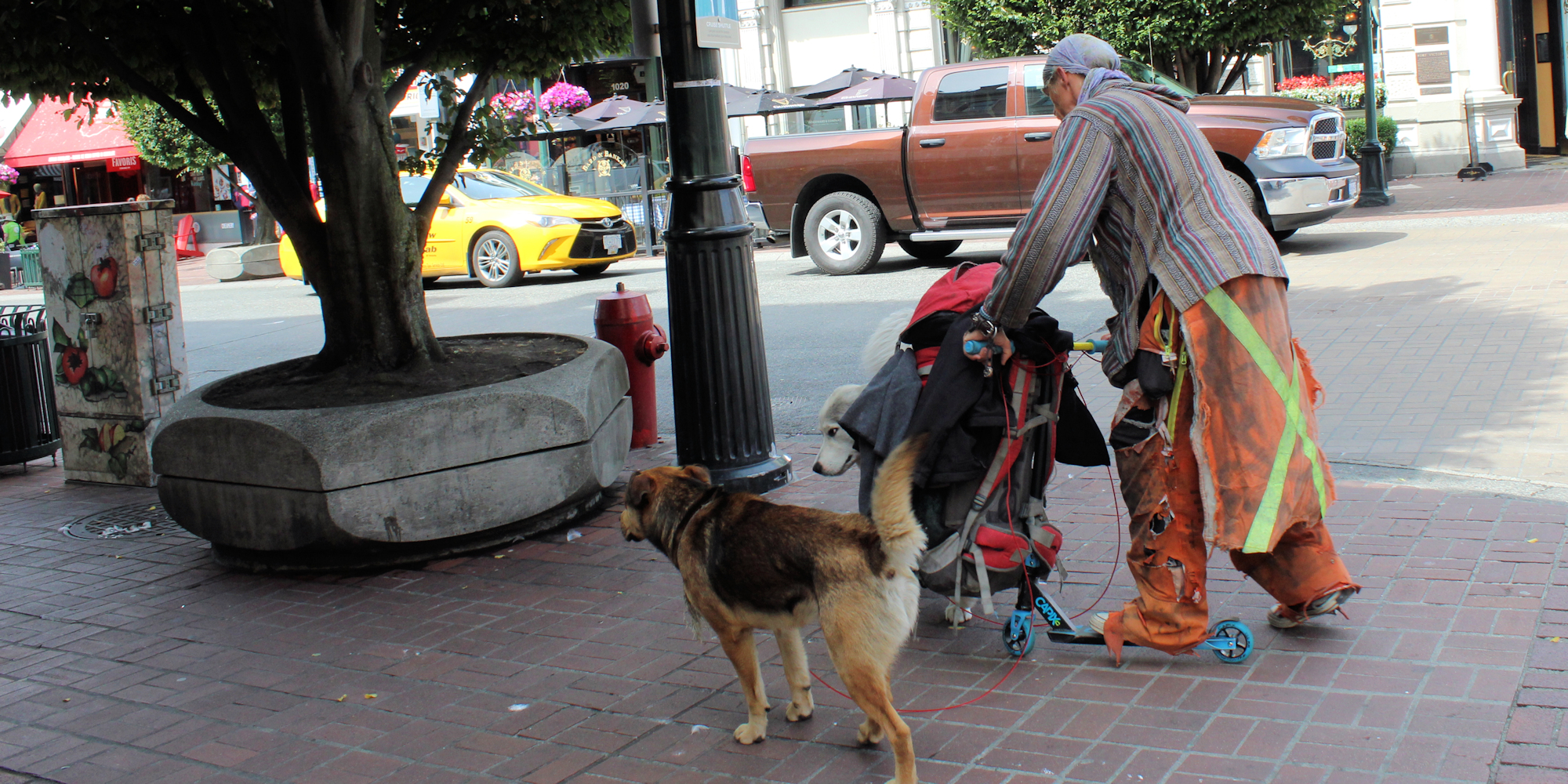 A homeless man on Government Street before the onset of COVID-19 shutdowns (Anne Catherine for The Capital).

Three weeks after BC declared a  state of emergency, Victoria is still scrambling to shield the city’s homeless population from COVID-19’s rampant spread. While there have been no confirmed cases on the island among people experiencing homeless, experts say it’s only a matter of time—and that quick action is needed to get everybody off the streets.

“When COVID-19 hits the homeless population it will be devastating,” says Bernie Pauly, a professor of nursing at the University of Victoria and a contributor to the 2016 book Pandemic Preparedness and Homelessness: Lessons from H1N1 in Canada.

With Victoria’s shelters full, and operating at reduced capacity to allow for physical distancing, tents have been springing up around the city. They line the blocks outside Our Place and Rock Bay Landing. They're pitched along The Gorge and The Goose. About 250 people were sheltering outside, Mayor Lisa Helps said on April 1.
‍

For people without homes, the basic struggle to survive has become harder as a result of the pandemic. Safety protocols implemented by service providers have eliminated access to much-needed resources. Drop-in spaces offering free meals, washrooms, clothes, and access to computers have closed. With restaurants and public spaces such as libraries and rec centres shuttered, some who live on the streets have been forced to relieve their bowels outside.

On Pandora Street, the city brought in portable toilets and hand-washing stations. The toilets lasted about a week before they were hauled away, clogged with needles and debris. Staff now escort people to and from the Our Place restrooms, which close at 9 PM.

Outreach workers come by daily to pass out food, socks, blankets, clean needles, and bottles of water. One of them, a formerly homeless “peer volunteer” called Honey, implores people in tents to stop picking up and re-rolling discarded cigarette butts, to stop sharing drinks, to stop hugging each other. More than anything, she tells them, Wash your hands. “You can only help so much,” says Honey, who’s been rapidly using up her personal bottles of hand sanitizer. “People are scared.”
‍

They have reason to be. Substandard living conditions make homeless people more vulnerable to infectious diseases than the general population, and the coronavirus is no exception. Without a home, it’s hard to follow public health directives to self-isolate, physically distance yourself from others, and wash your hands. Homeless people also have a high rate of pre-existing conditions, such as respiratory and heart diseases, that increase their vulnerability to COVID-19. Inadequate nutrition and sleep weaken the immune system, and many homeless people also suffer from health issues related to substance use.

BC Housing has been working with local municipalities, health authorities, and service providers to find sheltering options for the province’s most vulnerable populations, including domestic abuse survivors and those experiencing homelessness. As of Friday, it had moved 102 people from the streets of Victoria into hotels that had been emptied out by the pandemic. Discussions are ongoing with hotel and motel operators about securing more space. “The goal is to get everyone housed,” says Matthew Borghese, BC Housing spokesperson.

But adequate spaces in Victoria have been hard to come by. The city’s community centres are off-limits because they’re being used for child care. BC Housing has deemed the Curling Club and Crystal Pool & Fitness Centre insufficient and is now looking at properties that have been slated for demolition to see if they can be quickly rehabbed to fit the needs of the current crisis.

‍
“We’re trying to turn every stone over,” Mayor Helps said in a  Facebook Live update last week. “We’re running out of options.” Helps pointed out that while the city is assisting BC Housing, the responsibility for actually housing people lies with the province. “One of the biggest myths is that the city is responsible for housing,” she said, adding that to move everyone indoors, she said, BC Housing will likely have to work with Saanich, Esquimalt, and Oak Bay to find suitable vacant facilities.

In the meantime, the city has opened Topaz Park—and plans to open Royal Athletic Park—as a temporary staffed encampment, with meal deliveries and access to washrooms, a hand-washing station, and a safe-injection site.

But critics say that the site is lacking, even as a stop-gap measure. “My concern about the camps is that we’re setting up spaces that are actually like mass gatherings,” says UVic’s Pauly. “There are more chances for contact and spread, and there are more difficulties in trying to identify people who have COVID who would need to go into isolation. And how do you isolate in a tent when you have to go out and use a shared bathroom?”

Although a spacing grid at Topaz Park has been laid for tent placement—there are currently about 70 tents—the site doesn’t actually work so well to promote self-isolation, according to Trish Pal, an outreach worker for a grassroots Indigenous harm reduction team. With only two daily meals delivered and the supervised consumption area open for only two and a half hours each day, Pal says people are leaving the site to find food and drugs. According to Reverend Allen Tysick, executive director of The Victoria Dandelion Society, which is operating the site, volunteers have been supplementing the twice-daily restaurant meals by bringing in sandwiches and fruit.

Inclement weather also can make it difficult to practice physical distancing. It’s been cold and rainy lately, and the site lacks laundry facilities where people can dry their clothes. “A lot of times people will huddle closer to be warm when they’re outside,” says Grant McKenzie, director of communications for Our Place.

Although Topaz Park is up and running because of a collaborative cross-sector effort, Pal says the city and province aren’t doing enough to help the people there, and that grassroots service providers have been picking up the slack, often on their own dime. “We’re getting pallets to folks so they don’t have to sleep on wet grass,” says Pal. “We’re buying tarps and giving them out.”

Pal says on recent visits, the women’s bathrooms had run out of soap and toilet paper. And while showers have been promised, they have yet to appear. The hold-up, according to Tysick, stems from the need for Island Health to arrange for people in hazmat suits to clean the showers after each use. In the meantime, Pal says, “People haven’t had showers in two weeks.”

UVic’s Pauly agrees that the government needs to do better: “We need a response that is focused on reducing and preventing transmission of COVID, which means people have to have the same resources as the rest of the population to enact those prevention measures.”

In mid-March, Ottawa-based United Nations Special Rapporteur Leilani Farha spoke in blunt terms of the importance of housing as a “front line defence against coronavirus,” saying, “Home has rarely been more of a life or death situation.”

BC Housing’s staff has recently shifted to a seven-day-per-week schedule to ramp up the search for indoor sheltering locations, and they’re moving people into hotels and motels as rooms become available.

“We could house everybody today, if more motels came on board,” says Tysick. “Some do not want to come on board because of the clientele we’re dealing with.”

Pauly considers it a mistake to negotiate with reluctant business owners. In her view, there’s no time to waste. “I think there needs to be a provincial mandate that motels and hotels are immediately mobilized to provide shelter for people that are homeless,” she says. “That mandate needs to come immediately.”

But what happens when the pandemic is over and the hotels and motels reopen for business? “I don’t like to imagine what it looks like when someone asks these folks who’ve been housed in even the most rudimentary way to leave and return to the streets,” says Holt Sivak, director of programs and services for Our Place.

After the threat of 2009’s H1N1 pandemic passed, the “importance of preventing homelessness as an underlying source of vulnerability” received little attention in Victoria, wrote Pauly, along with two colleagues, in Pandemic Preparedness and Homelessness. “This may have been a missed opportunity for further action on the root causes of homelessness.”

Advocates for the homeless say the current crisis once again exposes the systemic failures that put people at risk and highlights the urgent need to find solutions to end homelessness. The last point-in-time count we have data for, from March 15, 2018, showed an increase in the estimated number of homeless people in Greater Victoria since the previous count two years earlier. Of the 1,525 individuals counted in 2018, 594 were unsheltered or staying in emergency shelters and 931 were “provisionally accommodated” in temporary locations, including transitional housing, treatment facilities, and other people’s homes.
‍

Experts say we’re at a critical moment—that if we don’t see the current crisis as a wake-up call to address the root causes of homelessness and to create stable housing for everyone who needs it, we’ll be caught off-guard again when the next pandemic strikes.

“Emergency sheltering is not an appropriate response,” says Pauly. “We need a prevention plan.”