The Chinese rufous horseshoe bat features in this photo illustration by Tristan Pratt. Weighing only about as much as two sugar cubes, it's one of these bats that's responsible for COVID-19 bringing the world to a standstill (Source image from Royal Ontario Museum).
COVID-19 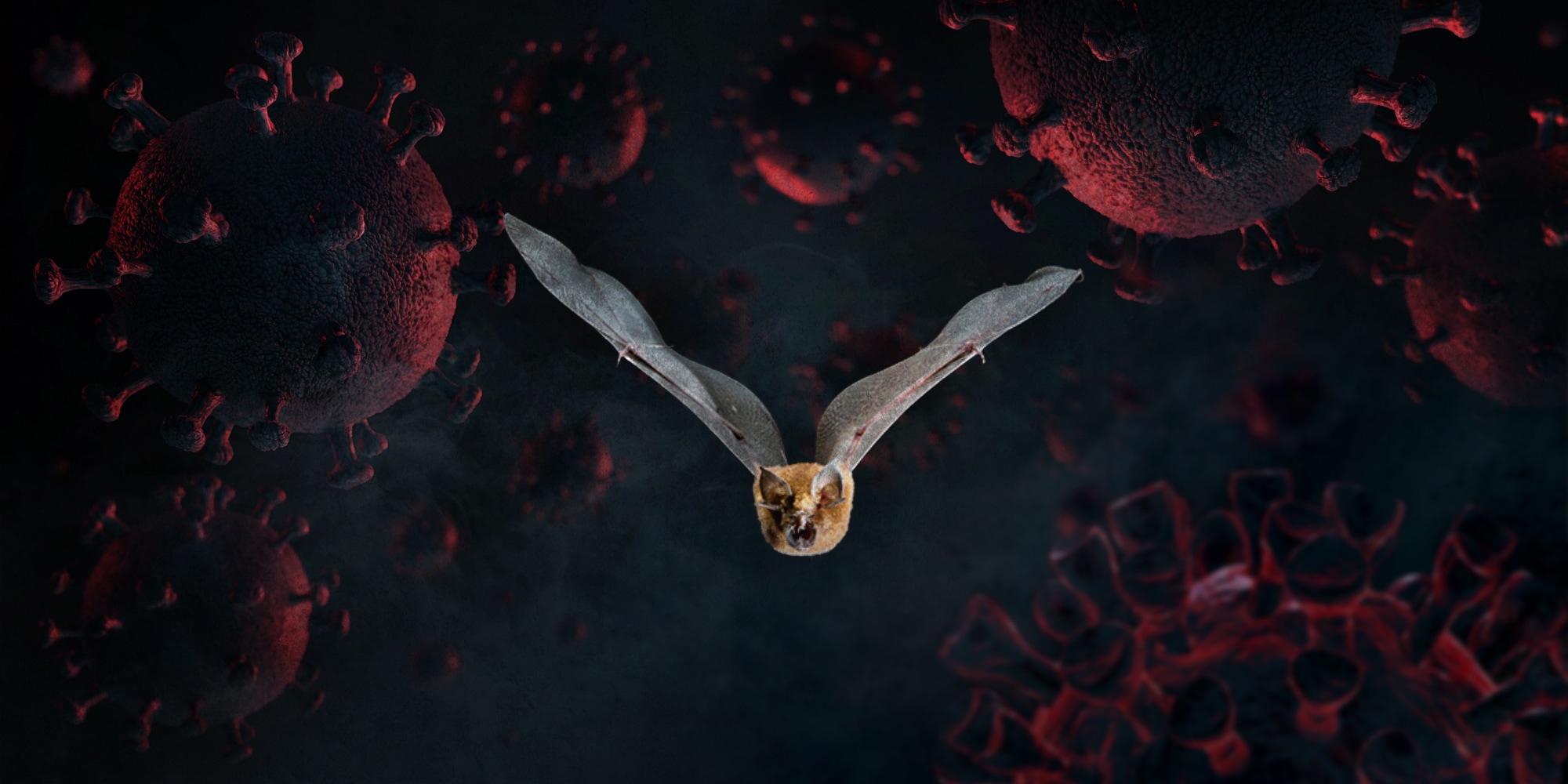 The Chinese rufous horseshoe bat features in this photo illustration by Tristan Pratt. Weighing only about as much as two sugar cubes, it's one of these bats that's responsible for COVID-19 bringing the world to a standstill (Source image from Royal Ontario Museum).

The Capital has already examined how COVID-19 might end through vaccines, herd immunity, or powerful treatments. An equally compelling story is how it all began. Below, UVic researcher Harley Gordon (who is one of thousands actively involved in the fight against COVID-19) details what we know about the origin story of this pandemic.

Viruses are everywhere, but only a handful of them kill us

A virus is an incredibly small lifeless particle, only a few billionths of a meter in size. Unlike that other great cause of human disease, bacteria, viruses are not considered alive because they can’t replicate without first latching onto a host.

While we continue to take extraordinary measures to insulate ourselves from SARS-cov-2, the virus that causes COVID-19, even the cleanest environment is utterly swimming in viruses. A 2017 study of 8,000 healthy people with no signs of infectious disease found viruses in 42% of their blood, and that number would have been 100% had they looked at the skin or digestive tracts. A single teaspoon of sea water contains quite literally billions of viruses. If you’ve got a backbone, you’ve probably got at least 58 different viruses in your body right now.

Of all the world’s viruses, only 206 have been identified that can harm humans, and these 206 come in a variety of strains. Of the 206, there were six infectious coronaviruses, at least before the newest member of the family, SARS-cov-2, burst upon the scene sometime last year.

We haven’t found a COVID-19 “patient zero,” and we may never

There is an ongoing search for patient zero, the first person to contract COVID-19, but given that 80% of cases are mild and up to a third are entirely asymptomatic, the virus could have been circulating for months before entering vulnerable populations and causing its first human fatality. Earlier strains of the virus were also less deadly than the strain that eventually hit Europe.

If a patient zero is ever found, likely through a massive forensic effort of antibody testing and blood bank analysis, we might be able to determine exactly how the virus entered human populations and figure out how to prevent any future infections, but that prospect seems further and further away.

COVID-19 has been around much longer than you think

As a virus spreads, it also mutates. These mutations can yield a deadlier virus, as appears to have happened with SARS-CoV-2, and they can also give researchers a tool to track the age and spread of a virus. Cataloguing the different mutations, or “strains” of SARS-CoV-2, for example, tell us that most COVID-19 cases in the US came from Europe. Although in California alone, a just-released study found that there the virus made it into the state via at least seven different unique hosts. The same is true of BC: Rather than just one original infection causing all our COVID-19 cases, the virus almost certainly came at us from many directions at once.

Although China didn’t alert the world to a novel respiratory illness in Wuhan province until New Year’s Eve, the earliest confirmed case was November 17th of last year, a full 5 months before emergency declarations in Canada. This was confirmed by testing past samples, and the patient wasn’t assumed to have any new disease at the time.

Analysis of wastewater in Italy discovered evidence of coronavirus presence in Italy as early as December, although the country is still believed to have been completely COVID-19 free in October and November. Given that any major city in the world is just a day’s travel from any other, it’s not surprising how quickly COVID-19 made the jump from China to Europe, particularly given its ability to travel through large numbers of asymptomatic cases.

Meanwhile, Brazil could have had the virus even earlier. A new pre-print research article from the South American country claims to have found COVID-19 in the sewage as early as late November 2019. Surprisingly, researchers found relatively steady levels of the virus in sewage from November to February, but it was only in March that the country’s numbers of confirmed infections started to rise. This is further evidence to the theory that early strains of SARS-CoV-2 was less dangerous after first making the jump into humans, before mutating into the deadlier version that we’re contending with now.

There remain many, many unknowns about SARS-CoV-2, but we at least know where it came from: Bats. Within weeks of the first cases of COVID-19, through genetic sequencing researchers were able to identify bats as the probable source of COVID-19.

Whenever a new virus comes out of nowhere and starts killing people, there’s a good chance that it incubated in animals before making the jump to humans. That’s true of swine flu (which came from pigs), HIV (which jumped from monkeys to human populations around 1920) and MERS, another respiratory coronavirus that was circulating in camels for years before it made the jump into human hosts.

Bats are known to be chock full of viruses that are dangerous to humans, including Hantavirus, Ebola, Marburg and some flu strains.There’s a few reasons for this. For one, bats have incredibly powerful immune systems, which means they can carry a much higher tally of viruses in their bloodstream without so much as running a fever. Bats are also relatively long lived for their size, meaning they have more time to contract viruses. They also live in large, tight-knit colonies which, as we know, is perfect for facilitating the spread of disease.

In fact, years before COVID-19 epidemiologists and virus researchers were making the eerily prescient predictions that a bat-incubated coronavirus could wreck havoc with humanity. After the SARS outbreak in 2003, scrutiny turned on tiny, insect-eating horseshoe bats in China, and in 2005 a scientific paper published in the journal Science found them to be full of coronaviruses. As Science wrote in 2013, “Bats May Be Carrying the Next SARS Pandemic.”

We don’t know how the bats infected humans

First things first; this pandemic didn’t start because someone chowed down on a bowl of bat soup. This has been de-bunked on a few levels, the first being that bat soup is not generally eaten in Wuhan, site of the first known COVID-19 cases. Secondly,  horseshoe bats are usually quite small, some as little as 4 grams, which means they are not commonly hunted for food, especially in Southeast Asia, where human consumption of bats is overwhelmingly of the larger fruit bats.

There is also little evidence to show that the virus was due to an accidental release from a Chinese laboratory. Suspiciously, the first Chinese cases of COVID-19 were identified in virtually the same neighbourhood as an infectious disease laboratory that was known to be researching coronaviruses in bats. It’s not unprecedented that laboratories will accidentally release dangerous pathogens, but the bat coronaviruses sequenced at the laboratory in question have little to no relation to COVID-19.

The 2003 SARS outbreak is presumed to have passed from bats to small cat-like mammals called civets and then into people. You probably know civets best as the animals that literally poop out the world’s most expensive coffee, but they’re also sold for meat in China’s Yunnan province where the SARS virus came in contact with people. Eating wild meat, and coming into contact with blood is one way to contract new viruses; it’s believed that HIV originally came from the eating of chimpanzees.

But with COVID-19, there is reason to believe that another animal helped weaponize the bat coronavirus into a form that could kill humans. Versions of bat coronavirus that are highly similar to COVID-19 were found to be lacking something called a “receptor binding domain,” this is essentially the piece of the virus that allows it to attach to human lungs.

Malayan pangolins, which are armoured arboreal mammals imported into China for meat, were found to contain a coronavirus with sequences of the receptor binding domain very similar to COVID-19. An early theory hypothesized that COVID-19 jumped from bats to pangolins and then to humans.

However, a new paper published in Nature Microbiology on July 28th disputes the pangolin origins of COVID-19, and shows that SAR-CoV-2 has actually been circulating in horseshoe bats as early as 1948. Meanwhile, the pangolin virus, while similar,  is probably a separate branch on the evolutionary tree of COVID-19.

The next viral outbreak is a matter of when, not if

We do know though that close contact with animals, particularly these bats can facilitate the spread of disease, the Chinese government recognizes this and has moved to permantly ban the wildlife trade, though many doubts are cast about the effectiveness of such a ban.

It’s not just wild animals we have to worry about though, modern factory farms with cramped conditions and over-medicated animals are a breeding ground for disease. Diseases like the H1N1 swine flu, or the ominous H5N1 Bird flu can spread through these farms rapidly.  It’s not only viruses from factory farms either, outbreaks of bacteria like E. coli and Salmonella or prions like Mad Cow Disease are always a risk.

The ever encroaching wave of humans and the limited space for animals to live will push us in ever closer contact with animals, it’s not a matter of if, but rather when the next coronavirus jumps into people. Although If it happens again, we’ll hopefully have effective vaccines in stock and an effective management plan in place.