Ingrid Hansen on the set of Sesame Street (submitted)

February 4, 2021
Get the news and events in Victoria, in your inbox every morning.
Thank you! Your submission has been received!
Oops! Something went wrong while submitting the form. 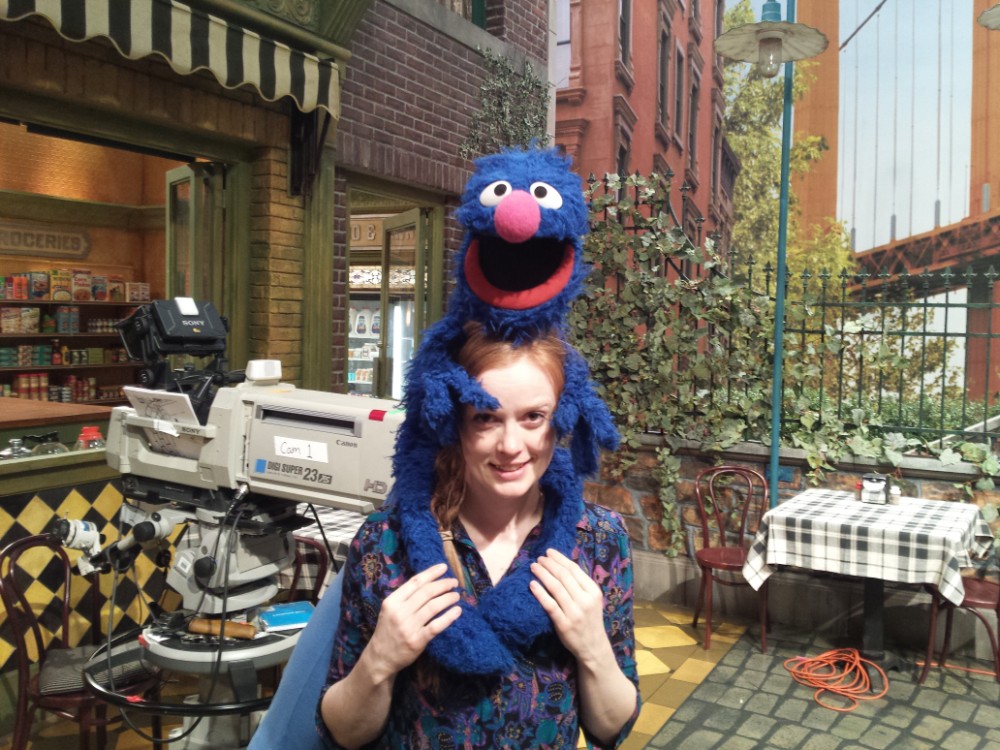 Ingrid Hansen on the set of Sesame Street (submitted)

On a cold night this January, Ingrid Hansen’s hands appeared on a reflective black table atop a temporary stage in the back lot of Phillips Brewery. Her fingers, lined up in a row, are projected in real time onto the brewery’s brick wall for the drive-in audience to see up close. When Hansen’s fingers begin to move up and down, and the reflection with them, her fingernails become teeth and the mouth becomes the emcee of one of the only live theatre shows in Victoria during the pandemic: Epidermis Circus.

The drive-in theatre performance, which opened with a boylesque performance from Keith MacMillan, was billed as an invitation to “celebrate what is beautiful, gooey, powerful, and ridiculous about the fragile meatbag of the human form.” Other segments included Hansen’s hand running across the stage, barking and sniffing at the butt of her other hand, and a sock puppet and an underwear puppet acting out a Romeo and Juliet tragedy.

Audience members, starved for live entertainment these past 10 months, were parked between barley silos and tuned in on their car radios, ready to honk for applause and wave their windshield wipers when prompted to do so. The show featured all of the best qualities of Hansen’s work: imagination, humour, strangeness, and pure delight.

Hansen has red hair and pale Danish features, and on stage she can appear anywhere between 13-years-old and the ageless ambiguity that Tilda Swinton possesses (but really, she’s 34). She’s been trained in clowning, dance, and choreography, and uses her lithe body to speak just as much as she uses her mouth.

“There’s a certain grace that Ingrid has, but also goofiness,” says Britt Small, artistic producer and co-founder of the local artist-driven collective Atomic Vaudeville, and co-creator and director of Epidermis Circus.

Hansen founded what was then called SNAFU Dance Theatre Society in 2006, and graduated from the Phoenix Theatre at UVic in 2009. Shortly after, she found success on the Canadian Fringe circuit with Little Orange Man (directed and co-created by Kathleen Greenfield), and she expanded her practice as a voice actor, performer, and puppeteer across Canada, then internationally.

SNAFU has created and performed original work for The Belfry Theatre, The Great Canadian Theatre Centre, and PuSH International Performing Arts Centre, among others, and has worked with inmates at the theatre company William Head on Stage (WHoS) to create performances inside the federal prison for the public.

Hansen also has a successful television career, and has worked on kids shows like Tiga Talk!, Miss Persona, and Princess Sparkly Butt and the Hot Dog Kid. One of her most recognizable accomplishments is puppeteering Heart, the big orange monster on Sesame Street’s show Helpsters.

“Now that I’ve worked with a Sesame Street show, my parents can tell people what I do in a way that they actually understand,” Hansen jokes.

One of the skits in Epidermis Circus involved Hansen pressing the side of a hand-held mirror against her face and having a conversation with a critical character named Tamra. Tamra is an old friend from grade school who just can’t wrap her head around what Hansen does for a living. “So you play with toys all day? That’s so fun for you,” she says in a blistering voice.

Hansen admits that the Tamra character is not so much a depiction of people she’s actually met, but instead one of her inner critics. “Nobody understands what we do,” she says. “Do we even understand what we do? I don’t know.”

However, Hansen has clearly had success balancing the creative and administrative skills needed to succeed as an artist in Canada.

“I think that a lot of artists struggle to do both, because they do really require different faculties of yourself. Although, if you apply the creative problem solving that you have in your artistic practice to any business problems, that can be a way in as well.”

The performing arts industry, which can offer precarious employment at the best of times, has been particularly hard hit by the pandemic, and according to Statistics Canada unemployment in arts and culture is still higher than other industries. Even one-person shows require a team of technical producers and an audience, and restrictions on social gatherings have forced most live theatre across the country to a standstill.

Like a lot of other artists, Hansen has experimented with virtual performances, but, “I’ve been wondering, does anyone really want to watch virtual theatre?” she said. “I’m not so sure.”

SNAFU’s other live show this year was a part of SKAMpede, Theatre SKAM’s outdoor festival that occurs along the Galloping Goose Regional Trail every summer. Their designated space was beside the commuter path, and covered in goose poop, but they made it work.

“We created a piece where these four business people in very professional business attire slowly physically devolved into geese, and then goosed around. We kind of Cookie Monster-style ate a bunch of bags of chips and laid eggs.”

That opportunity fit perfectly with SNAFU’s mandate to target different audiences. “So many people don’t ever go see theatre. And that’s a problem, meaning that we can be tucked away in our own little world, like oh, the thing I’m making is so relevant,” she says. “And then if you were to show it to a 45-year-old working-class plumber they would go, ‘What the heck is this? I don’t get it.’ Then you’ve probably failed.”

SNAFU’s work is often about big issues like world hunger (Interstellar Elder) and the foster care system (Ginger Ninjas), but its stories are always driven by a humorous absurdity. “We always try to make something that’s dynamic and urgent in some way. And we always try to work in humour,” says Hansen.

Kitt and Jane: An Interactive Survival Guide to the Near-Post-Apocalyptic Future was a play co-created by Hansen, Greenfield, and Rod Peter Jr that toured across Canada bringing audiences the story of two ninth graders who highjack the school assembly to announce impending doom and a game plan for how to survive the climate crisis. The play combined shadow puppetry, video projection, and live music to explore climate anxiety from a young perspective.

“That show was created with that feeling we sometimes had as teenagers, and we also had in the present about our whole current system of operation—not just the burning of fossil fuels or whatever, but the perpetual-growth economy of our capitalism. What’s it going to look like when we’re 75?” asks Hansen.

The lovable yet fallible characters of Kitt and Jane are just one example of how empathy and imagination informs Hansen’s work. The “human ability to separate ourselves from other people and to categorize people [allows us] to distance ourselves from the harm we may be causing,” she said. “If we were able to really truly imagine what their experience is, we wouldn’t be able to harm them in that way.”

Right now, Hansen’s interested in the widespread repercussions of the pandemic, and those themes may already be seeping into her work.

The closing act of Epidermis Circus involved Hansen’s red-lipsticked face making intense eye contact with the camera, before finally opening her lips and tonguing out a miniature red house. Her mouth returns again and again with a tree figurine, a car, which she blows to drive off-stage, a spotted cow, and much more.

“During this time when we’re not supposed to be showing each other our mouths, and we’re all covered up in masks, it feels kind of transgressive,” said Small.

Currently, SNAFU is collaborating with WHoS to create a prison podcast that will launch in March. But until Hansen can safely return to a film set, or be in the same room as her audience, she’ll sit at home and breathe life into her salt and pepper shakers.

Do you know a Victorian with a great story? We want to hear from you: contact@capitaldaily.ca