November 17, 2022
Get the news and events in Victoria, in your inbox every morning.
Thank you! Your submission has been received!
Oops! Something went wrong while submitting the form. 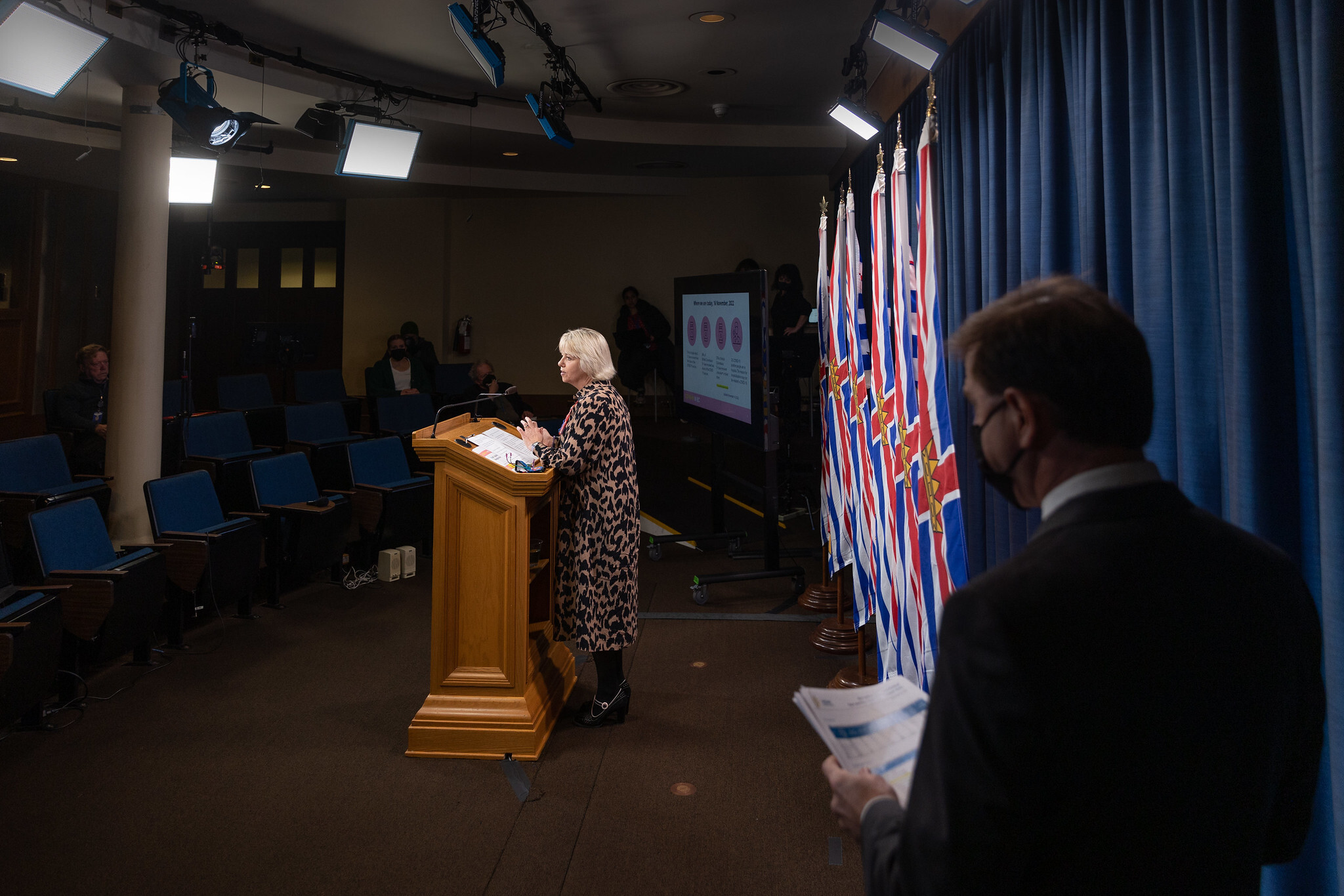 Health minister Adrian Dix and provincial health officer Dr. Bonnie Henry reasserted their position on the need for a mask mandate on Wednesday morning: the measure is too “heavy-handed,” they said, and will not be reinstated.

Across BC, reports of increases in pediatric hospital wait times and school absences prompted questions of whether the health ministry would, at a scheduled press conference, bring back mask mandates in school settings.

“We're not in the situation right now where I think every single child and adult in the school setting has to wear a mask all the time,” Dr. Henry said, emphasizing that masks should be available and encouraged in schools even if not mandatory. “Where we need to pay attention to are all the pieces that go together to make it a safe environment, and to give children what they need in the school environment which is activities and being in person all the time, the social connections.”

She and Dix also presented charts that showed COVID-19 hospitalizations are low, and a current spike in hospital visits is being driven by other respiratory illnesses like RSV, influenza, and the common cold.

This data was thrown into question at a follow-up press conference organized by the BC Green Party. BC Children’s Hospital pediatric heart surgeon Dr. Sanjiv Gandhi said patients are not tested to determine which type of respiratory illness they have, in answer to Capital Daily’s question.

“I can answer that question because I am privy to internal communications about that…the only kids that are tested for what they actually have [are] kids that fall into specific categories or risks or kids that require inpatient admission,” Dr. Gandhi said. “So if your kid’s immunosuppressed or your kid has pre-existing illness, or if the kid is a certain age, like a newborn baby, then they would get tested for a variety of viruses, not just COVID-19.”

The current guidance, according to Dr. Gandhi, is that children who go to the hospital and don’t meet those criteria are not tested to determine their diagnosis. The BCCDC and health ministry were not able to respond to a request for clarification of testing procedures on Wednesday afternoon.

A chart presented by the health ministry also shows a rise in pediatric ICU admissions, “with particular sites having been over capacity in recent days.” It represents pediatric intensive care admissions from BC Children’s, Victoria General, and University of Northern BC hospitals.

In a statement on Thursday, Island Health said the Victoria General Hospital pediatric intensive care unit was at capacity overnight on Monday, although no admitted patients were actually sent to Vancouver. The levels of admission this fall are essentially the same as they were over the same period last year, with an average of about 1 to 1.5 more children per day than usual showing up at Island hospitals. The number of ICU admissions stayed roughly constant as well. However, the numbers Island Health provided do not cover the current period, in November, when the province report that admissions have been increasing.

The health minister was also asked how many children's elective surgeries have been cancelled or postponed in response to a spike in respiratory illnesses. “There are on a daily basis occasional surgeries that are canceled, but essentially, across the system we've been doing record numbers of surgeries,” Dix replied.

Dr. Gandhi, speaking for pediatric heart surgeries at the BC Children’s Hospital, says what he’s seeing is well out of the ordinary.

“It’s routine that my cases have been cancelled over the past several weeks; it’s actually unusual for me to be able to do an elective cardiac case…the capacity is far lower than it’s been,” Dr. Gandhi said. “I presume that that's the case for other surgical services too.”

These cancellations cause a “demoralizing” situation, said Dr. Gandhi, who regularly has to tell parents that the surgeries their kids need and have been preparing for over several weeks will no longer happen due to a lack of capacity.

The province’s official stance, according to their presentation on Wednesday, is that surgery postponements “could be required…as a last resort.” Their current response to the long wait times at hospitals is to set up a dedicated provincial pediatric table led by the BC Children’s Hospital to coordinate resources and quickly respond to rising demand at the three pediatric ICUs in BC.

For Dr. Gandhi and BC Green leader Sonia Furstenau, any steps that could prevent children from getting sick in the first place are welcome and necessary.

“As a parent, as a teacher, when I see the levels of the number of children who are needing care right now who don't have access to a primary physician, who can't get into a walk-in clinic, who are presenting to emergency rooms that are overburdened with nurses and doctors who are understaffed and enormously challenged, I am incredibly concerned for the well-being of children in this province right now,” Furstenau said. The Green leader pointed to Ontario, where hospitals are reducing the number of surgeries they perform and transferring older kids to regular hospitals to make space.

“I don't want to wait until we are seeing the levels that they're seeing in Ontario before we take action in this province. This is why we're calling on this government to make the decision to ensure that people are wearing masks, in school, in public areas, and on transit.”

The only situation in which Dr. Henry would reinstate a mask mandate would be the arrival of a new COVID-19 variant of concern in BC, outside of the multiple variations of Omicron BA.5 that she says are currently prevalent in the province. Beyond that, the PHO said there is currently no need for a mask mandate due to a high level of vaccination and immunity from prior infection in BC.

Official opposition leader for the BC Liberal Party (on its way to being renamed BC United), Kevin Falcon, also spoke against a mask mandate when asked by reporters, but for a different reason.

“I would agree with [Dr. Henry] in that recommendation, just because I think, frankly, it would be very, very difficult to enforce,” Falcon said. “Whether we like it or not, I think a lot of the public is just really tired of all this.”

When to wear a mask remains in the hands of individuals, with BC’s public health leaders encouraging people to do so when they have symptoms of respiratory illness and are sharing an indoor space with others.

“I may wear a mask one day on the bus if it's crowded, the windows are closed, or if I'm worried that I might be getting the sniffles,” Dr. Henry said, in an example of this individual practice. “But on another day, if I'm feeling fine, and there's lots of space and good ventilation, I may choose not to and that's okay.”