April 2, 2021
Get the news and events in Victoria, in your inbox every morning.
Thank you! Your submission has been received!
Oops! Something went wrong while submitting the form. 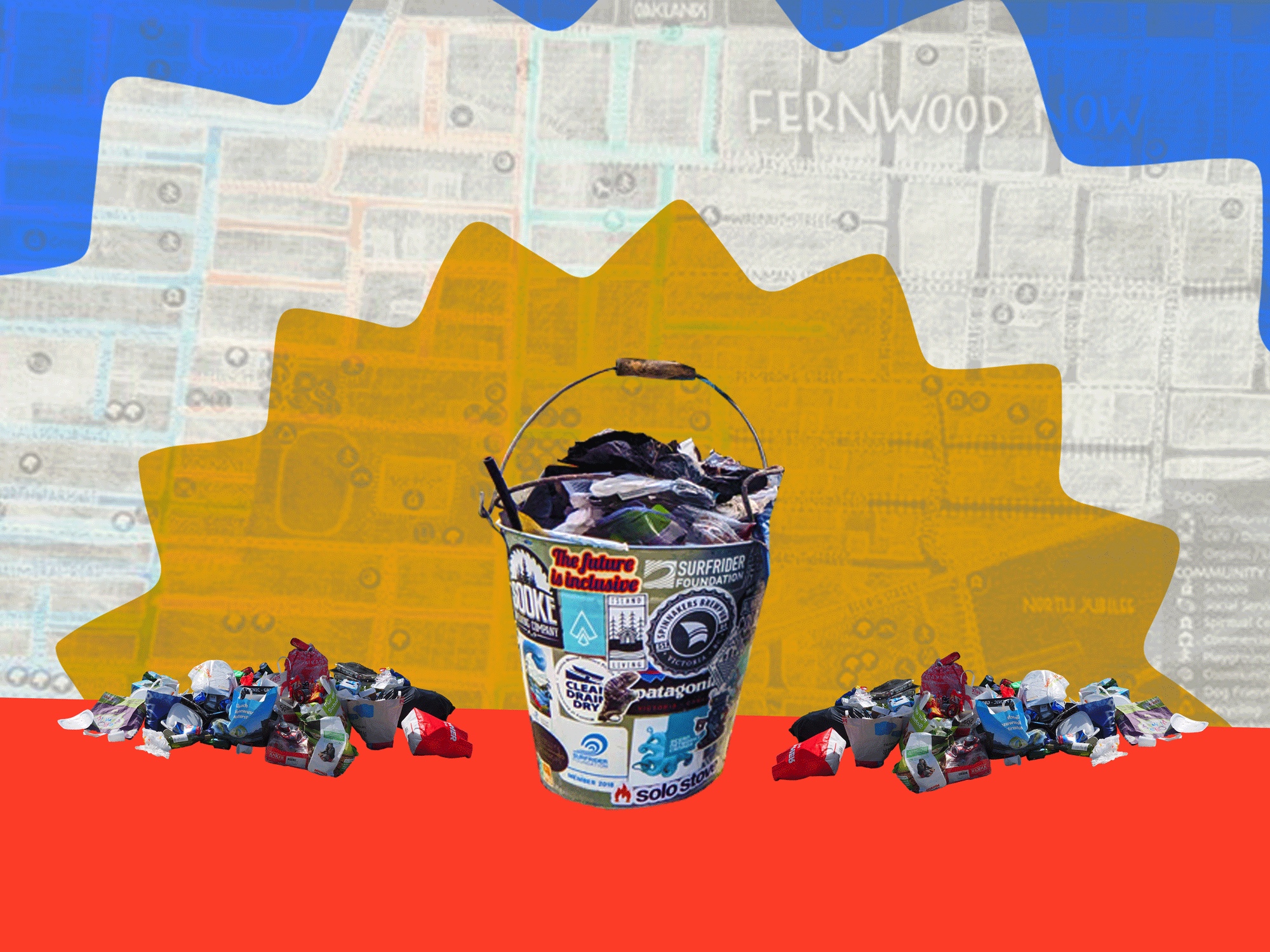 On any Saturday morning, David Boudinot rises early and dons his gear—blue gardening gloves, a litter-grabbing tool, and his sticker-covered metal bucket—before hitting the streets of Fernwood.

For two hours, he combs the curb for litter: coffee cups, masks, cigarette butts. Depending on the day, Boudinot says his 15-litre bucket might fill up anywhere between once and four times.

Boudinot has collected more than 1065 litres of refuse in these outings—almost enough to fill nine residential trash bins.

“We're all responsible for the trash that is produced,” he says. “So it's kind of up to all of us to keep the city clean. Certainly the city is doing what it can, but there are thousands of kilometres of streets and only a limited amount of time, resources, and money to maintain the infrastructure.

“It's an easy enough thing for me to do, and if it helps inspire other people to clean up their streets, parks, trails, or beaches, then that's great.”

Since December 2020, Boudinot has made it his mission to make his neighbourhood cleaner, one bucket of refuse at a time. Making his way north-to-south, he’s covered more than half of Fernwood over the past few months—a journey he’s documented through photos of him with each day’s findings on social media.

Although litter might go unnoticed to most passersby, experts say it leaves a big environmental impact over time. Washing out through gutters and storm drains, about 10 million tons of litter ends up in the ocean each year—80% of which comes from land—and carries harmful chemicals, harms wildlife, and threatens habitats. Plastics are particularly dangerous, as some estimate they could take at least 400 years to decompose.

Cigarette butts—one of the most common finds along Victoria’s streets, Boudinot says—take 10 years to decompose, and leave behind chemicals like arsenic, which contaminates the soil and ocean.

And it’s just unsightly: nobody likes to see garbage collecting on their streets. But few people dedicate this much time to fixing the problem.

Although it’s his goal to clean up every street in the neighbourhood at least once, he has no intentions of stopping after that.

He’s not alone. In addition to groups like the Surfrider Foundation, a local organization that holds beach cleanups that remove thousands of pounds of garbage from Vancouver Island each year (and the group where Boudinot got his start collecting litter), there are many locals in other neighbourhoods around the city who have picked up this cause.

Two of those locals include Lara Wilson, who works with Boudinot at the University of Victoria Libraries, and her partner, Kelly Harms. Inspired by her coworker, Wilson and Harms set out to clean up Cook Street Village armed with 10-litre and 22-litre buckets, respectively.

“We definitely go until both of those buckets are full. Sometimes that's fast, sometimes that's slow,” Wilson said. “I just find it very focused and it can be quite relaxing as well.”

For Wilson and Boudinot, the pandemic played a role in their desire to take these regular walks around the neighbourhood, but they also see it represented in the items they find strewn in the streets. Masks tangled in bushes and discarded gloves have become common.

In his time traversing the streets of Fernwood, Boudinot has found several lost and stolen items he’s been able to return to grateful owners: cell phones, wallets, a photo of a woman’s deceased mother. One of his most remarkable finds was a laptop discarded in a trash can, which he later discovered had been stolen out of a UVic student’s backpack.

However, he notes, “there's some sketchy stuff out there.” He’s had to contact the police to handle some of his more serious finds, including illegal dumping, hypodermic needles, and a sinister-looking knife.

Some might see the job of cleaning up Victoria’s streets as Sisyphean or futile—the trash of others will always keep coming.

But Wilson says this work carries a lot of meaning, especially on a local level.

“I do believe that small acts do make a difference. But it's part of a continuum as well… it goes from individuals to corporations and governments,” she said.

“Kelly and I both think of it as an extension of our responsibility as uninvited uninvited settlers on Lekwungen territory that we have to contribute to the care of this land… and [might] cause some folks to reconsider their relationship to the land and their role in the neighbourhood.”

These acts of environmental kindness have not gone unnoticed.

“I get lots of thank yous, people honk at me and wave,” Boudinot said, “which is very sweet. Online, people are sharing that they've been inspired to see what I'm doing and are starting to share how they're cleaning up in their communities.”

In response, Boudinot commissioned stickers to give other litter pickers he encounters to stick on their buckets.

Boudinot is not the first person to take on the issue of litter, or to be questioned about the impact his individual actions might have. But he remains optimistic in the change he and his 15-litre bucket can help contribute to and inspire.

“I can clean up one street, and then by showing other people that I've cleaned up the street, it's inspired others to do the same,” he says. “Pretty soon, maybe there's like 100 people cleaning up the streets.

“There are two choices: you can either do something or you can do nothing. I choose to do something.”