An angry crowd gathered outside what was then the Kaiserhof Hotel on the night of May 8, 1915. After the sinking of the RMS Lusitania, Victoria responded with violent attacks on German-Canadian-owned businesses (BC Archives #A-02709)

June 21, 2020
Get the news and events in Victoria, in your inbox every morning.
Thank you! Your submission has been received!
Oops! Something went wrong while submitting the form. 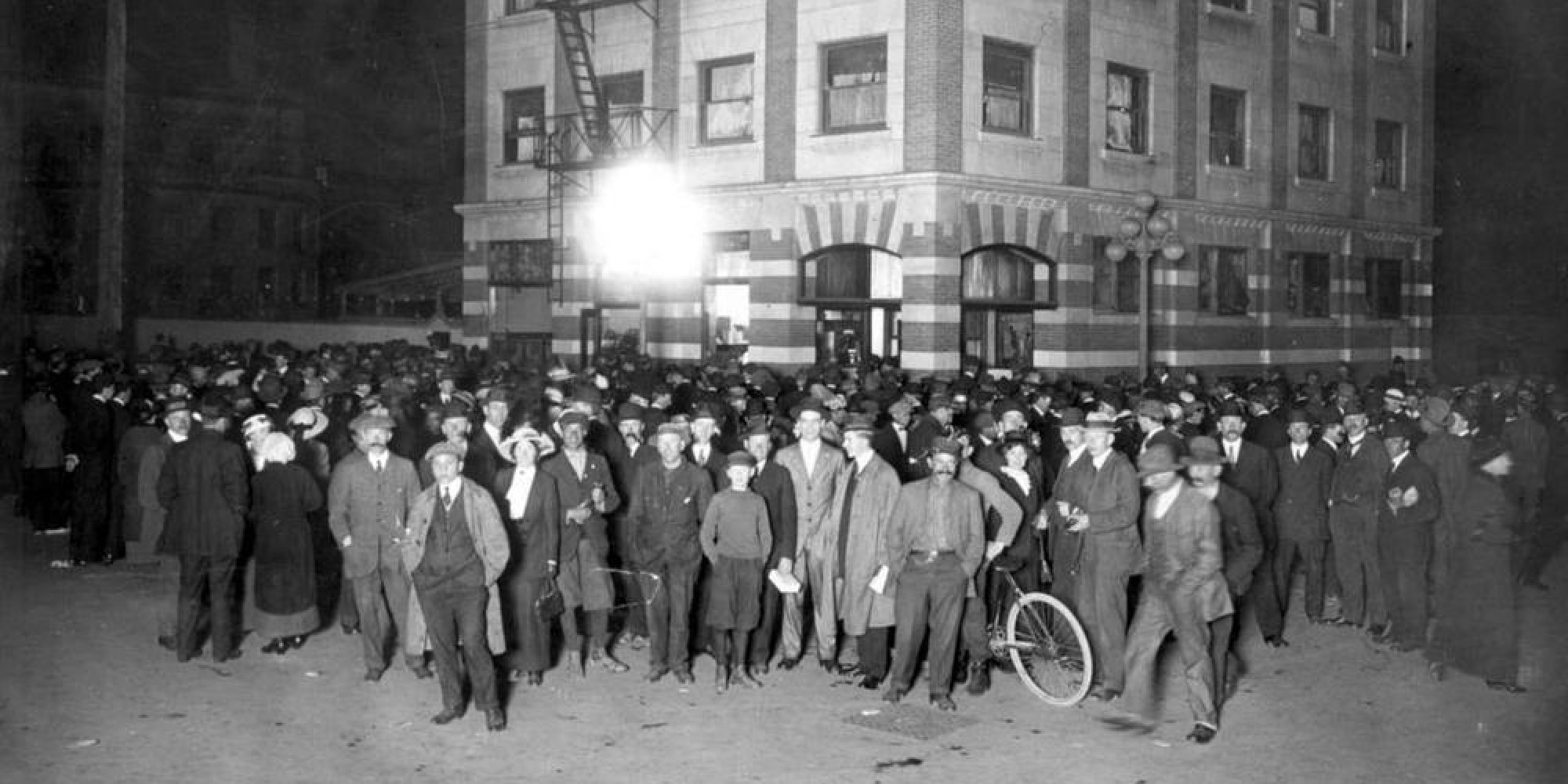 An angry crowd gathered outside what was then the Kaiserhof Hotel on the night of May 8, 1915. After the sinking of the RMS Lusitania, Victoria responded with violent attacks on German-Canadian-owned businesses (BC Archives #A-02709)

As of this writing, our neighbour to the south is still recovering from the most destructive spate of rioting since the 1960s. So we asked Ann Edelstein to revisit the time in 1915 when it was Victoria whose air hung with smoke and whose sidewalks lay strewn with broken glass.

Everything has a flash point, the minimum temperature at which it erupts into fire. In dry summers, when the afternoon heat crisps the leaves and brambles on a forest floor, the woods are often just a spark away from their flash point. On May 8, 1915, downtown Victoria reached its emotional flash point after a German torpedo struck the RMS Lusitania and sparked the riots and looting that blazed across town and destroyed several businesses overnight.

The Lusitania, then one of the largest passenger liner on earth, had been sunk by a German u-boat off the Irish coast only the day before, killing 1,197. The sinking sparked outrage around the world, and would ultimately be a key factor towards driving the United States into the First World War. But Victoria, like Winnipeg and Montreal that night, would respond to the tragedy with a mass outbreak of violence against anybody and anything with a German-sounding name.

The city had lost one of its own on the ship. Lieutenant James Dunsmuir was the son of a former premier and the grandson of Robert Dunsmuir, the builder of Craigdarroch Castle. He had been on his way to serve on the Western Front, and had reportedly opted to leave from New York because it offered the fastest possible route into Europe. Dunsmuir’s body was never recovered.

In the prior months, Victoria had become a very unfriendly place to be a German. All across Canada, the outbreak of the First World War had cast suspicion on the country’s substantial German-Canadian community, particularly as reports of atrocities — some real and some concocted — poured in from Europe. The anti-German sentiment of the time is evident in an article on the Lusitania sinking published in the Victoria Daily Times that compared Germans to African cannibals.

Amidst all these simmerings of anti-German hostility, a foul rumor soon circulated that the Blanshard (also known as the Keiserhof) Hotel was hosting a celebration of the Lusitania's fate.

Victoria was crawling with soldiers stationed at the Willows Fairground, a staging area for mobilization to Europe. If their outrage over the Lusitania hadn’t been enough, only a few weeks before the German had deployed poison gas for the first time in an attack that would slam directly into Canadian soldiers.

Just before 8pm, the Keiserhof bar was swarmed by a crowd of angry soldiers who began singing “Rule, Britannia!” and demanding that the bartender display the Union Jack. Three rioters even “climbed the fire escape to the roof and strung two Union Jacks from the flag staff,” reported The Daily Colonist.

One plate-glass window was smashed, but the mob seemed to lose interest and left the stunned guests to process the events while the riot set its sights on the German Club at Government and Courtenay. As the mob of angry soldiers progressed towards the club, it grew into a swarm of approximately three-hundred.

This time, they were relentless. Absolutely everything that wasn’t nailed down was picked up and tossed through the club’s windows. Furniture was smashed before it too was turfed into the street below.

No sooner had the Blanshard Hotel breathed a sigh of relief than the rioters stormed back, now carrying portraits of British royalty like flags into battle. The Daily Colonist detailed how they “thronged through the place and the crash of [glassware] and noise of furniture hurled downstairs was echoed by the shouts of encouragement from outside.”

There were estimates that the mob now included 2,000 men, and both police and firefighters on scene could only watch helplessly; this wildfire of human fury had swelled into too large a beast. The riots blazed down Yates Street, destroying several businesses wholesale. Shreds of paper and fabric streamed out of windows and flapped out at passersby while barrels, boxes, and chairs rained down upon the crowd below.

It was a storm even the military had trouble taming. At 1:30, a contingent of 150 armed soldiers were marched into the downtown from Willows Park and posted outside buildings suspected to be among the next targets for the mob.

Yet the riot resumed on Sunday, ransacking more small businesses including the Victoria Phoenix Brewery and the tailoring shop of Ernest Schaper and W.W. Glass, which suffered the worst looting. Ultimately, it would take a literal reading of the riot act — and the deployment of every available soldier and police officer in the region to restore order. Final damages would be estimated at the equivalent of $1.5 million in 2020 dollars.

After recent riots in Minneapolis, one of the lesser known scenes was the wave of locals who turned out after the violence had ended to sweep up the glass and help business owners get back on their feet. A similar phenomenon occurred in Vancouver after the Stanley Cup riot of 2011, when crowds of embarrassed locals spontaneously volunteered to clean up the damage of the night before.

The Victoria of 1915 seemed to be well aware at the time that they had just suffered one of the ugliest episodes in the city’s history. The Daily Colonist, for one, would scold rioters that after ransacking huge portions of the downtown, they hadn’t struck a blow against Imperial Germany or even men with tenuous German connections, they had merely shattered the livelihoods of their own.

“In nearly every case the premises wrecked belonged not to men of German birth, but to local British citizens,” it wrote. 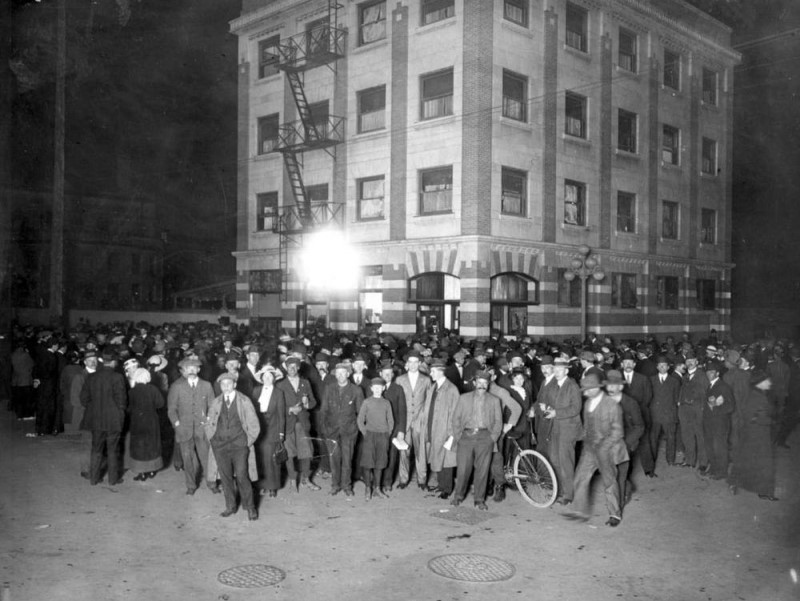 Mobs had sought vengeance against the city's Germans, but succeeded only in shattering their own downtown
No items found.