December 10, 2021
Get the news and events in Victoria, in your inbox every morning.
Thank you! Your submission has been received!
Oops! Something went wrong while submitting the form. 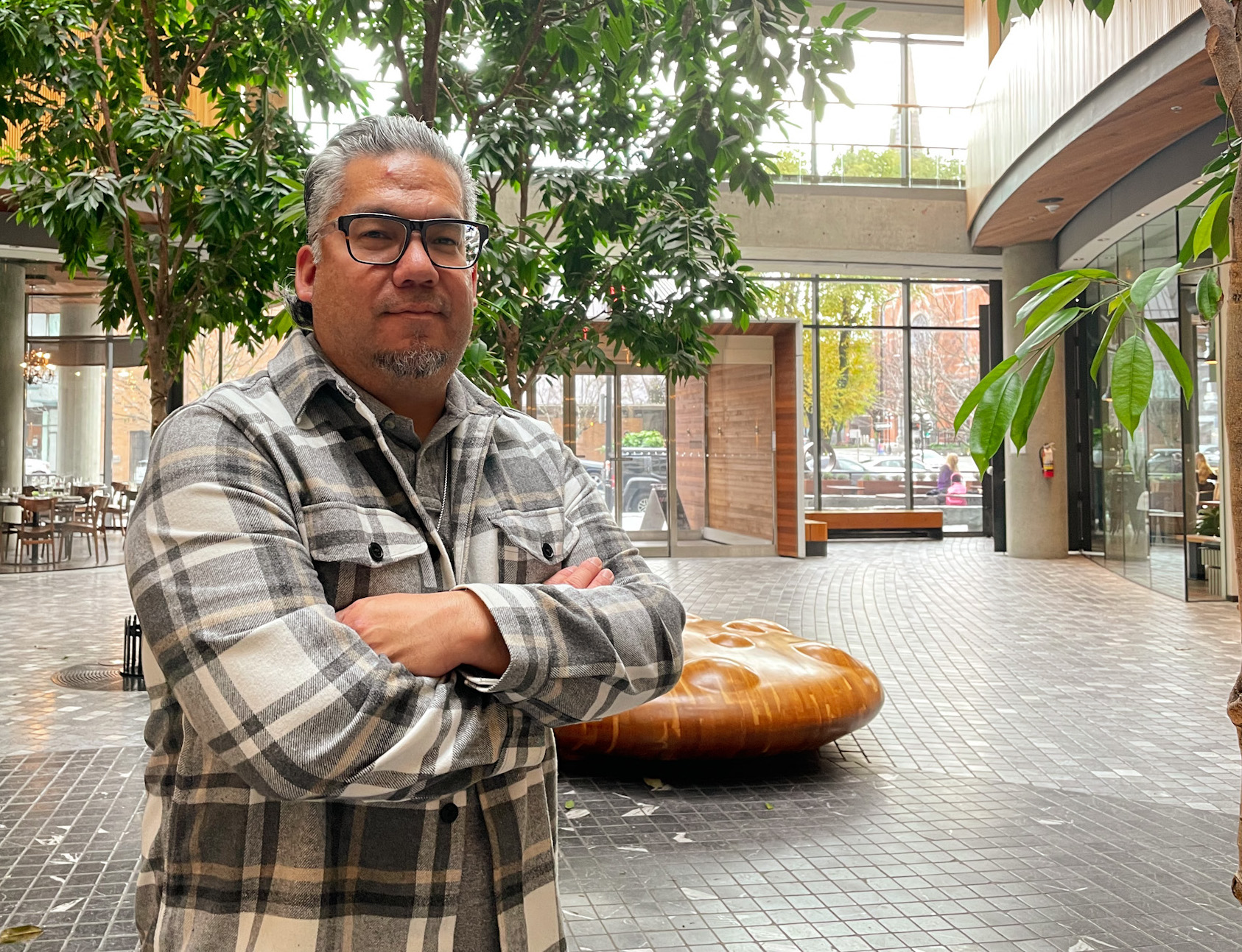 When Maynard Johnny Jr. completed his first sketch of the design for the Salish Heron, he was working with a rectangular square of paper only an inch or so tall—a to-scale print out of the space BC Ferries had set aside on their ship. With a pencil, he spent hours crafting the heron within those margins before bringing it to be digitized and filled in with his chosen colours.

But when he boards the newest Salish-class ferry with his family in May for its maiden voyage, it will be the largest of his works he has ever completed.

“For me, it's about the notoriety of course but also the step towards truth and reconciliation with Canada… it's going to be a stepping stone,” he said.

The Salish Heron will be the newest of four Salish-class vessels to carry travelers between the Gulf Islands bearing designs from Indigenous artists. Johnny hopes his work raises questions with tourists and residents not only about the issues facing Indigenous people in Canada today, but on the 10,000 years of Indigenous history predating settlers.

“It’s also a playful design,” Johnny said. “I want peoples’ curiosity to go, ‘Who are Coast Salish people; what are they about?’”

Exposure isn’t something that Johnny feels he necessarily needs for himself, however. Thirty years into his career, his work has been featured on the set of Grey’s Anatomy and bought by art collectors from across the world. One of his painted sculptures, a fibreglass coho salmon, now sits in Tower Zero in New York City, and another of his designs was selected to adorn cedar chests given out to some of Canada’s top musicians at the 2009 Juno Awards.

This was Johnny’s second time as a shortlisted artist to design a Salish-class ship, after the first round of designs for three ferries in 2015. This year, his work was chosen from a pool of 36 artistic submissions. After a tough deliberation by the peer review committee, organized and facilitated by the First Peoples' Cultural Council, a select group of Indigenous artists along with representatives from BC Ferries finally made their decision.

“It's dynamic, it's colourful,” said Cathi Charles Wherry, special advisor to the First Peoples’ Cultural Council, of Johnny’s final work. “The design made really great use of the space… it was an excellent design and will look fabulous on an enormous scale.”

Although he’s tried everything from carving, to textiles, to metal work, painting is the medium where Johnny feels he can truly excel.

Johnny said that he started out as an artist without a mentor to train or guide him. As an artist of Kwakwakaʼwakw and Coast Salish descent, he spent many hours studying the work of his favorite artists, including Robert Davidson, Susan Sparrow Point, and Art Thompson, as well as the traditional Coast Salish art in the archives of the Royal BC Museum. (“They have it in drawers,” he said, “which is really annoying to me, but at the same time at least I know it's safe there.”)

Over time, he developed the distinct colour palette and style he’s now known for. He aims to approach his subject in new, subversive ways as to bring new light to traditional forms.

He draws a lot of inspiration from regular visits to his aunt Florence James, a Coast Salish elder. In their discussions, she tells him traditional names, histories, and stories of their people, which he’ll often record and play back while he’s working on his latest piece. He often can notice influences from these conversations woven into his work.

“I just feel so uplifted, it’s like exercising,” he said.

Getting to where he is now hasn’t been an easy journey. Throughout his career, he’s encountered people seeking to undermine his work by devaluing his art or constantly treating set prices as negotiable—an insulting practice that other professions and non-Indigenous artists typically don’t experience, he says.

“I've had to deal with systemic racism,” Johnny said. “I was looked at [by gallery owners] as beneath, and I was looked at as like, ‘You should be happy I'm giving you this much.’”

Young artists, according to Johnny, should be prepared to be let down and fail. Being told he wasn’t good enough by people he now believes were trying to keep him at a certain price level nearly made him leave the profession altogether, he said.

Now, he’s learned to set boundaries with his pricing, and is in a comfortable enough place in his career where he no longer has to work with people who attempt to take advantage of him. He has two apprentices of his own currently, and hopes to take on more.

The 48-year-old is already planning for the legacy he will leave his grandchildren, both in spirit and in practical assets.

“Without my mom's support, I would have never been where I’m at today,” he said. “I realized, I have to be that kind of support to my grandkids.”

Although he owns a house on his reserve, he says it’s a “BC box” made of the cheapest materials from government contractors, without the equity he hopes to pass on. In the next few years, Johnny is looking to buy a home for himself with enough bedrooms for his family to visit.

It’s his goal to work up to selling his work for $100,000 by the time he is 60—but he’s well aware that most artists don’t yield the true value of their paintings, which often appreciates dramatically after they are gone. Johnny keeps two prints of every piece he creates and gives them to his mom, as he knows she will never sell them. After he’s gone, he hopes this stockpile of art will help support his grandchildren in whatever they decide to pursue.

In terms of career goals he hopes to achieve, Johnny still has big dreams. He has complicated feelings about his work one day hanging in British or French museums, an aim he isn’t too caught up in achieving.

“It's so hard to explain, being a person of colour, with the way Europeans that came here treated us. I want to go to the Vatican and I want to have a piece there that reflects who we are as Indigenous people so they can't ignore it, or have an audience at least with the Pope,” he said.

“It's a realistic goal, but it's also just, like, a ‘throw it in their face’ kind of goal for me, if I do make it to the Louvre.”

More than that, however, he wants to leave a legacy his daughter and his grandchildren can be proud of.

Over the next few months, the Salish Heron will sail from the shipyard at which it was built in Poland past Italy, England, and France to the Salish Sea. Johnny’s heron designs will be sealed onto its hull, and a history of the work and the Coast Salish people will be on display inside the boat.

As someone who learned from artists who walked these lands 7,000 years ago, Johnny understands the timeless impact art can have. It’s his hope, with the Salish Heron roaming the seas for years to come, that other Coast Salish artists will be inspired to pursue their own talents.

Correction at 2:45 pm on Dec 10: an earlier version of this story said a group of local artists made the decision to use Johnny's work on the new ferry. That decision was made by Indigenous artists and BC ferries. It has been further updated to reflect that Johnny is part of Kwakwakaʼwakw Nations.