March 10, 2021
Get the news and events in Victoria, in your inbox every morning.
Thank you! Your submission has been received!
Oops! Something went wrong while submitting the form. 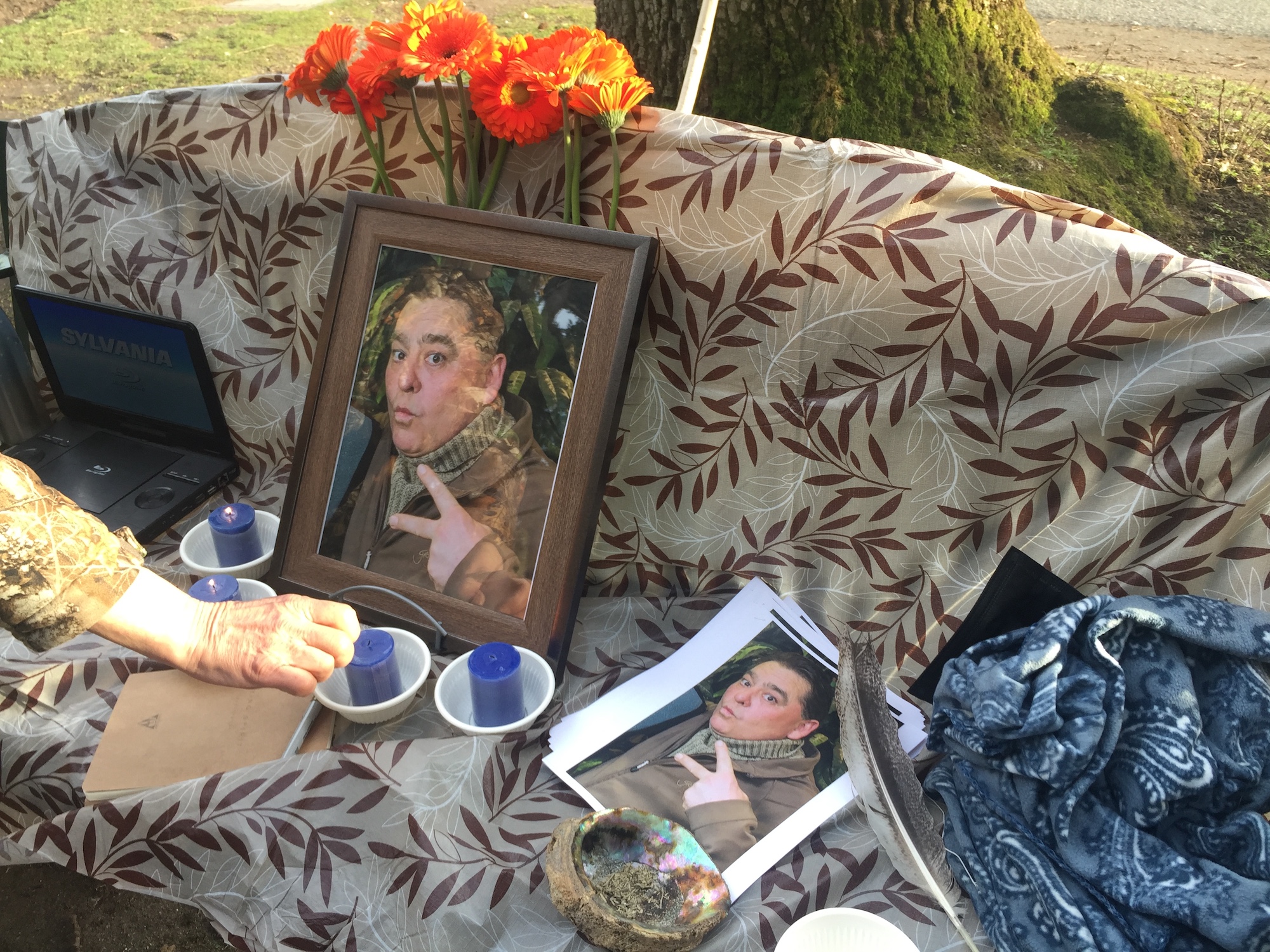 Millie Modeste and Jim Harris moved out of their camper van, and out of Beacon Hill Park, three days before an early morning van fire killed their friend Mike Lockhart. It happened in a parking lot near the Children’s Farm. Millie, a self-described insomniac, figured if they’d still been living there, she might have been able to save him.

Millie was arranging items on a park bench draped with a leaf-patterned tablecloth. A framed photo of Mike mugging while throwing a sideways peace sign leaned against the back of the bench, propping up a handful of orange Gerber daisies. Millie had chosen the photo from several that Mike’s brother Ryan had sent to her, because it showed Mike “goofing around” and she thought his character came through. A copy of the same photo was stapled to Mike’s obituary. In it, Ryan, the youngest of the four Lockhart siblings, described Mike, who was 60 when he died on March 4, as someone with a “huge heart, unfettered generosity and a warrior spirit.”

Ryan had briefly lived in the park last summer in a borrowed van, a hiccup in his otherwise stable life that ended up being a blessing, as it gave the brothers, 11 years apart in age, their first real opportunity to bond. They liked to walk together near the water or sit outside with a six-pack and “heal our shit,” as Ryan called it.

There was a lot to heal. A 2016 criminal conviction and 90-day jail sentence had cost Mike his career as a shipyard rigger and set him on the path of heavy drinking. He moved in with his mother and then became her main caretaker after she developed cancer. When she died in 2018, Mike bought a van with his inheritance. Ashamed of the direction his life had taken, and filled with inner turmoil, his drinking became even more pronounced. “Alcoholism took over,” Ryan says. Living in a van at Beacon Hill Park didn’t change Mike, but it changed how he felt about himself, according to Ryan.

Recently, though, Mike had been in a good frame of mind. He’d made a solid effort to curb his daytime drinking and had just compiled the necessary paperwork for his pension. He’d also been talking about wanting to find an apartment and had put his name on “all the lists” for low-income housing, according to Millie.

Last summer Mike had pinned his hopes on Oak Bay Lodge, after the former seniors’ home was floated as a temporary shelter to keep people experiencing homelessness safe during the pandemic. “He wanted to go there because that’s where mum finished her days off,” Ryan says. “He’s like, ‘I might as well go stay there—I like that place.’” Resistance from Oak Bay’s community was fierce. An online petition against the proposal that raised the spectre of crime garnered more than 100 signatures, and some in the community, worried about their proximity to needles and narcotics, railed against the idea on social media. In early September, BC Housing and Island Health deemed the Lodge unsuitable for a temporary shelter. Mike briefly stayed at the Salvation Army downtown, but he told Ryan he was kicked out for drinking.

Death is never far from the campers’ minds. A day before the fire that killed Mike, another person was found dead nearby. Rumours flew through Beacon Hill Park—that it was a woman, that the woman was Jessica, that Jessica had been “hacked up.” At Mike’s memorial gathering, Jim assured a distraught woman and Millie that it hadn’t been Jessica, that Jessica was alive, that he’d talked with her the day before.

Fire hazards are one of many safety concerns for the city’s unhoused population. Many who live in tents and camper vans rely on propane systems for their stoves, ovens, refrigerators, and heating systems. The tanks can leak poisonous gas, catch fire, and explode. After Mike died, city officials came through the park handing out flyers with fire safety tips: check propane systems for leaks, keep an updated gas leak detector, and have propane systems inspected to make sure they’re working properly.

Mike had a 25-pound propane tank hooked up to a propane heater. A week before he died, it had caught fire. He told one of his brothers that flames were shooting out of the side of the tank but that he’d managed to put it out by himself. Investigators have yet to determine the cause of the fire that eventually killed him, but Mike’s friends suspect the propane tank—and believe that his death, essentially, was caused by his lack of housing. “He should have been housed a long time ago,” said Millie.

Like Millie, Jim had been ruminating over whether he might have been able to save their friend. In recent weeks, he’d repeatedly offered to set up a proper furnace for Mike, but Mike kept putting him off. Millie thought Mike just didn’t want to bother Jim with the task because of Jim’s carpal tunnel syndrome; Jim thought Mike worried that it would end up costing money. But it wouldn’t have cost anything, Jim said. “Everything was already there. All that was needed was propane and to test the lines, to make sure there was no leaks and get everything up and running.”

“He was going to go over there this weekend and bully Mike into it,” Millie said. She was worried about how Jim was dealing with Mike’s death: “They were quite close.”

Early in their 23-year relationship, Millie and Jim lived hard on the streets. They quickly realized “this ain’t us,” bought camping gear with the last of their money, and set up in Goldstream Park. They say more often than not they’ve been housed. But things took a turn for the worse last year, when they found themselves looking for an apartment in a pandemic and finding nothing affordable. For eight months, they lived in their van, making it as nice as possible; Jim described it as “a small project that grew into a big project.” Ryan helped them install solar panels, and Jim installed a digital fireplace. Most importantly, they had a working furnace.

As Millie lit candles in saucers and arranged them in a semicircle around Mike’s photo, support workers stood nearby, behind a table, offering mourners shepherd’s pie and jelly-filled cupcakes with whipped cream.

About 15 people had come to pay their respects. A smudging ceremony was planned for 4pm, but it was already well past that hour. Millie said they were waiting on a woman called Grandma Rose to arrive with her drum.

In the meantime, guests milled about, offering their sympathy to Ryan and sharing stories about their friend. Mike may have had fists like hammers and the appearance of a guy you’d want on your side in a bar fight, but those at Beacon Hill Park knew him as a gentle soul. Whatever his demons, he was a lighthearted, fun-loving guy—a guy who’d jokingly shout to friends across the parking lot, “Yo yo yo, gangsta playah, whatyoudoing?” He called women “Darling'' and men “Fuzzy Nuts,” and his friends say he was always there to lend a helping hand.

He’d connected a new park resident from Montreal, who spoke little English, to resources, including a food bank. Another camper described him as a “night watchman” who made others feel safe. He’d feed the peacocks that came pecking at his door and bring treats and tins of food to Millie’s gray and white Burmese cat, Missy. “She had him wrapped around her paw,” Millie said. “As soon as she showed up, Mike just turned to Jell-o.”

Not long before the group gathered in a circle and began the smudging, Jim wandered over and told Millie to let her know that the candles on the bench had blown out.

Millie didn’t relight them; it was windy, and they’d already been relit.

“I don’t know what to do about that, love,” she said. Sometimes second chances last only a moment.