Many housewares from the set of MAID are now in the homes of people supported by WIN programs. Photo: Emily Fagan

Capital Daily is part of the Trust Project
latestCOVID
TransportationBusiness
HousingGood News
Many housewares from the set of MAID are now in the homes of people supported by WIN programs. Photo: Emily Fagan

November 12, 2021
Get the news and events in Victoria, in your inbox every morning.
Thank you! Your submission has been received!
Oops! Something went wrong while submitting the form. 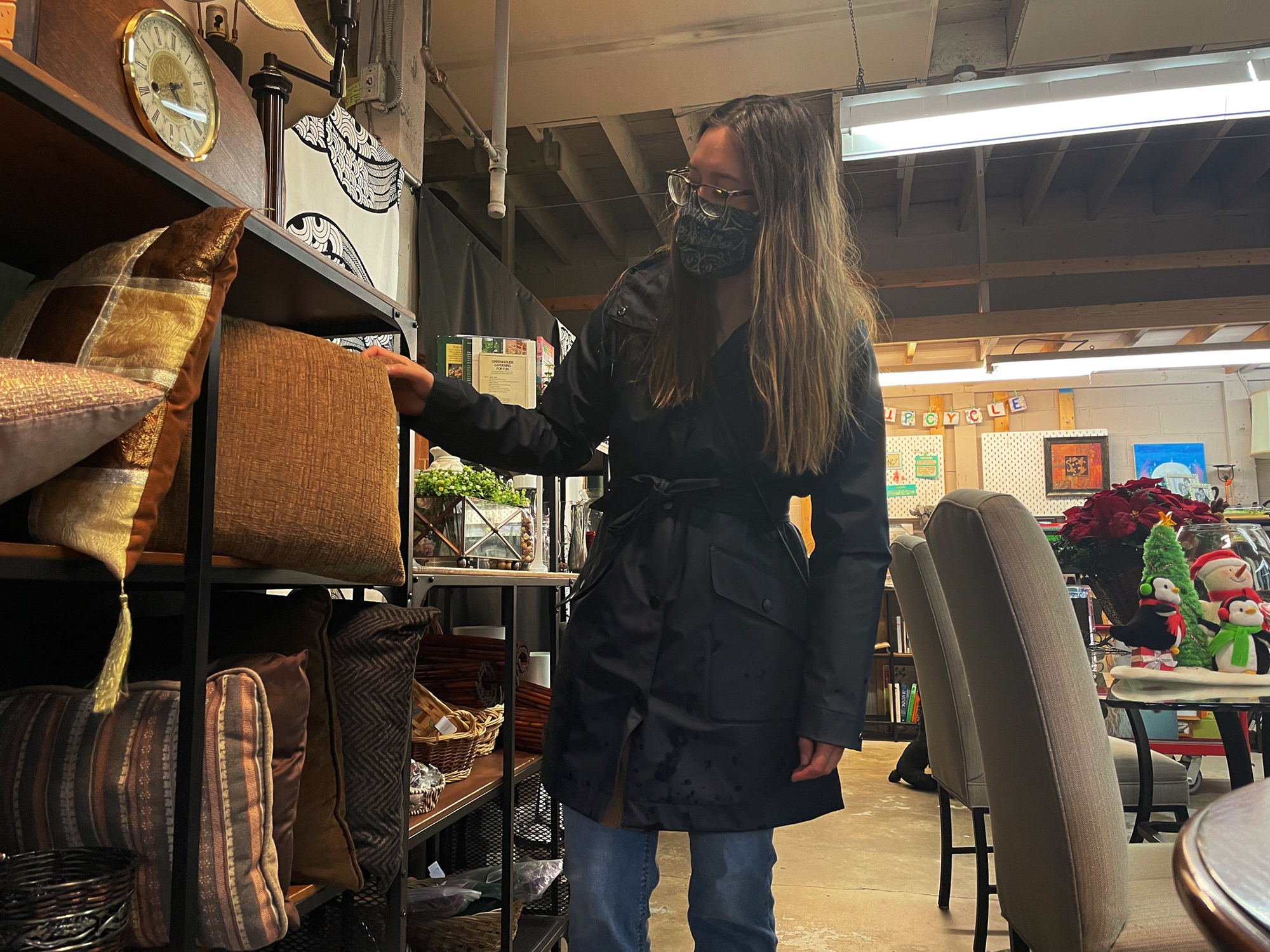 Many housewares from the set of MAID are now in the homes of people supported by WIN programs. Photo: Emily Fagan

You saw them in Netflix’s hit limited series Maid—and now, they’re in homes across Greater Victoria, helping those who experienced domestic violence find a fresh start.

Both on- and off-screen, the homewares and furnishings used in ​​Maid had a big role to play in conveying the show’s message around the systemic challenges women face in escaping intimate partner violence. And now, thanks to large donations made by the production team, the show’s impact is having an even wider reach in Greater Victoria.

Netflix’s Maid, filmed at 185 locations around Vancouver Island, cast a spotlight on the impact domestic violence can have through its heartbreaking story of a single mother breaking free from her abusive partner.

As the show’s message reaches millions of viewers across the world, it has also given back to Greater Victoria community organizations and businesses—particularly those that support people who have experienced domestic violence. But even non-profits that did not receive direct support from the production are praising the show for the positive impact they’ve already begun to see it have on the community.

“​​We donated as much as we possibly could,” said Paul Russell, who worked as the location manager for Maid.

“There was a conscious effort for us to give back what we could, because of the content of the show... it would have been hypocritical for us to tell the story the way that we did and not give back in some way.”

In Russell’s 20 years as a location manager, he’s seen film productions donate set and wardrobe pieces in the past, but not on this scale. He said the production team had a “massive” warehouse of all the items used to film Maid, and after the seven months of filming they worked to donate as much of it as possible to local non-profits.

These donations came at a significant time for organizations working to support those impacted by intimate partner violence. During the pandemic, domestic violence shelters and services saw an outpouring of calls for support.

One of the primary recipients was Victoria’s Women in Need Community Cooperative (WIN). Kate Charlebois, WIN’s marketing, design and partnership coordinator, said that WIN received a large donation of housewares and furniture from Maid that has allowed the organization to keep up with the demands of an influx of people seeking support during the pandemic.

“To have multiple truckloads of those quality goods was super impactful for us,” Charlebois said.

“It was the volume and the quality [that made a difference], because it was set decorations that hadn’t been used before.”

WIN has several programs devoted to supporting women, along with trans, nonbinary, and two-spirit people through situations of crisis—some of which resemble the supports depicted in Maid. These include their Crisis and Referral Program for immediate needs and resources, the Gift Certificate Program to allow participants to discreetly shop in WIN stores for free, and the New Start Program to help participants and their children who are leaving transition homes furnish their new homes. In 2020 alone, WIN helped provide 61 new starts for people in the community.

In a way, these donations allowed for a bit of a full circle, Charlebois said.

“A lot of those items [Alex] in the series has to get to set up her new home and start that new step of life,” she said. “So it's just a cool connection of how those items in a series that's bringing awareness are then used in our programs.”

The other main recipient of these donations was Victoria Women's Transition House Society. Much like the shelter depicted in Maid, it provides emergency shelter, counselling, and support services for women and their children who have experienced intimate partner violence.

Although Susan Howard, development and communications director for the Victoria Women's Transition House Society, could not elaborate on the specifics of the donation her organization received from Maid, she is overjoyed to see how far reaching the show has become.

“I have family and friends who have been watching this series from Moose Jaw to Israel… I couldn't believe it,” she said.

“Our sector is grateful for bringing this issue to light in a way that was relatively accurate and entertaining.”

In the wake of the show's climb to fame, even the organizations who were not directly supported through donations from the production team are grateful for the impact it has had.

“I thought it was one of the most powerful shows I've ever seen,” said Joanne Linka, manager of communication and fund development at the Cridge Centre. “I've been telling everybody they need to watch it.”

Prior to the show, Linka felt there was not much awareness around how intimate partner violence is pervasive and difficult to escape.

The main character of Alex, portrayed by Margaret Qualley, struggles in coming to terms with calling her situation domestic abuse. In a scene where she is asked if she filed a police report, Alex responds, “And say what, he didn't hit me?”—a line that stuck with Linka and many other support workers.

Even though every person’s experience with domestic violence is different, and the character of Alex was fortunate to have a wealthy friend to help her, Linka felt Maid’s fictionalized depiction did well in highlighting many of the issues she sees through her role at the Cridge Centre.

“The experience of women being victimized and not being able to access services, and just [having] one closed door after another—that is absolutely how things work,” she said.

Linka has seen a number of donations come in from the community as a result of the show, which she feels speaks to a shift in the community’s awareness of these issues.

Even with these donations, Linka said, each of these organizations could use more support from the community.

“The reality is, especially now with COVID, the demands for services are high,” she said.

For the Cridge Centre and Victoria Women's Transition House Society, monetary donations are the best way to support their programs. WIN also accepts monetary donations, but has a big need for furniture and housewares so that they can continue providing fresh starts to people around the community.

Victoria is not the only place that has seen an influx of donations from Maid viewers. Stephanie Land, who wrote the original memoir that inspired Maid, tweeted her support for everyone who had donated to their local shelters and transition houses after watching the show.

“I have heard from a few people that folks are donating to DV shelters in honor of #MAIDNetflix and this is the most beautiful thing,” she wrote. “Thank you all so much.”

The Cridge Transition House for Women has a 24 hour crisis line at 250-479-3963 available to anyone seeking support for issues related to domestic violence. If you would like to support people in our community who has experienced intimate partner violence, you can donate to Women in Need, the Victoria Sexual Assault Centre, the Cridge Centre, and Victoria Women's Transition House Society.