An image taken from the Twitter account of BC Liberal leader Andrew Wilkinson showing a masked, distanced doorstep meeting with a potential voter in Maple Ridge (Twitter.com/Wilkinson4BC).

Capital Daily is part of the Trust Project
latestCOVID
TransportationBusiness
HousingGood News
An image taken from the Twitter account of BC Liberal leader Andrew Wilkinson showing a masked, distanced doorstep meeting with a potential voter in Maple Ridge (Twitter.com/Wilkinson4BC).

September 24, 2020
Get the news and events in Victoria, in your inbox every morning.
Thank you! Your submission has been received!
Oops! Something went wrong while submitting the form. 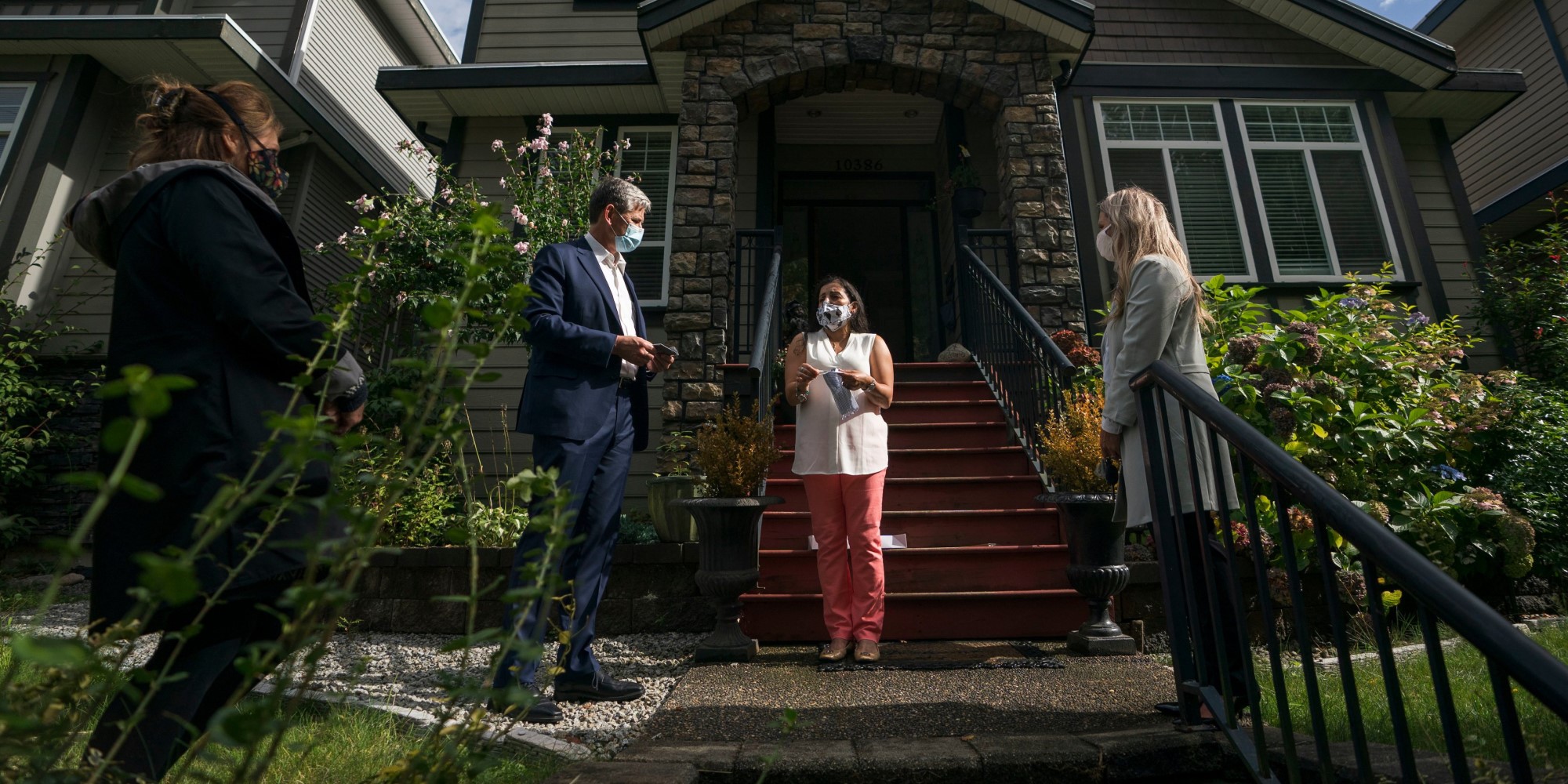 An image taken from the Twitter account of BC Liberal leader Andrew Wilkinson showing a masked, distanced doorstep meeting with a potential voter in Maple Ridge (Twitter.com/Wilkinson4BC).

Even though early polls show that British Columbians seem poised to vote John Horgan into a majority, that doesn't mean they're liking the BC NDP leader's idea to call a pandemic election one bit. More than half of respondents to an Innovative Research Group poll reported that a provincial election during a deadly pandemic would be a "bad idea." It's definitely going to be a different election: No hand-shaking, no rallies and probably not a lot of door knocking. Below, we looked into how BC's politicians aim to canvass votes from people they cannot approach or touch.

Vote and leave: The delicate dance of in-person voting

The timing for this isn’t great: Currently, BC has the country’s highest rate of COVID-19 per capita with an active case rate of 43 cases per 100,000 people. So, like most things these days, this election kicked off with a September 22 briefing by Provincial Health Officer Bonnie Henry. There, we learned that voting is still going to be possible in person, albeit with heavy precautionary measures: Mandatory masks (which are provided if you don’t bring one) and an official to ensure you sanitize your hands before and after voting. Also, you’re going to have to bring your own pencil.

Voting places have been reimagined to get people in and out as fast as possible. “Casting a vote will be like picking up a takeaway coffee” Elections BC representative, Anton Boegman said at the September 22 briefing. Under official BC Ministry of Health guidelines, voting places are not considered as a “gathering or event,” but it also means Elections BC officials will have to diligently keep the stations from accumulating more than 50 people at a time. So, the basic message is: Vote and leave (and don’t touch anything). Curbside voting will also be offered where British Columbians can vote from their vehicle.

Or, vote while staying home

Unlike typical elections, voters will not need a special reason to vote-by-mail (COVID-19 prevention is the special reason). Mail voting packages are available now through the Elections BC website, and you’ll receive a ballot, secrecy sleeve, and an instruction sheet to ensure voting integrity. While Elections BC is asking voters to request a voting package as soon as possible, be warned that ballots will be blank if voters apply for a package before the nomination deadline.

You’ll also have to be diligent about mailing out the package early; if Elections BC doesn’t receive your ballot by 8pm on October 24, it doesn’t count. Fortunately, for those squeamish about trusting their franchise with Canada Post, it’s also possible to deliver the package personally to a drop off site listed on the Elections BC website. As of this writing, an incredible 160,000 vote-by-mail packages have been requested by BC voters. Whoever wins this thing, we can already be assured that they put there disproportionately by people wearing pyjamas.

Telephone voting is also now extended beyond those with vision impairment or hearing loss. And, throughout the election, district electoral officers will be checking in with at-risk communities who have additional barriers to voting including seniors, First Nations, and people experiencing homelessness.

Elections were already shifting into the online space, and that’s going to be supercharged with this one. Rallies are definitely off the table, as are most of those events where politicians deliver a speech in front of a crowd of solemn workers in hard hats. In a typical election, party leaders shuttle from event to event in a bus packed with aides and reporters. BC Liberal leader Andrew Wilkinson noted the contrast in transportation this election when he posted a photo of him climbing into his “campaign bus”; a mid-sized sedan that he will be driving himself.

Several riding associations have already outright pledged not to send volunteers door to door, instead favouring an approach where, in the words of Comox-Courtenay Liberal candidate Brennan Day, voters “come to us.” So, car parades, drive-in speeches, outdoor festival-like events and that kind of thing.

The BC constituency that votes most of anyone, of course, is also the one with the most patchy connection to the internet. So, all three major parties are getting creative to ensure they can still reach seniors. The good news is many seniors have landlines … being able to contact those who are not adept at the internet is going to be the easiest part of the campaign, quite frankly,” BC NDP leader John Horgan said early in the campaign.

The BC Liberals, meanwhile, are angling to hold three televised debates to the usual one, arguing that “access and exposure of candidates will be far more limited due to the pandemic than during a ‘normal’ election period.”

BC is only the second province to go to the polls in the midst of a pandemic, of course. New Brunswick went to the polls only a week before BC dropped the writ, and residents in the Atlantic province have reported that the campaign was a somewhat eerie experience of seeing signs and pamphlets manifest themselves in a neighbourhood — but with few sightings of the actual human volunteers installing those things.

New Brunswick Green Leader David Coon told Canadian Press that his party coped by putting candidates in the back of a truck and then driving them through busy areas to answer shouted questions from potential voters. “When you’re trying to talk to people and you’re wearing a mask, they’re wearing a mask, and you’re distanced apart, it’s not as comfortable as a normal conversation,” Coon reported.

The data is in! Our comprehensive breakdown of the 2020 election results 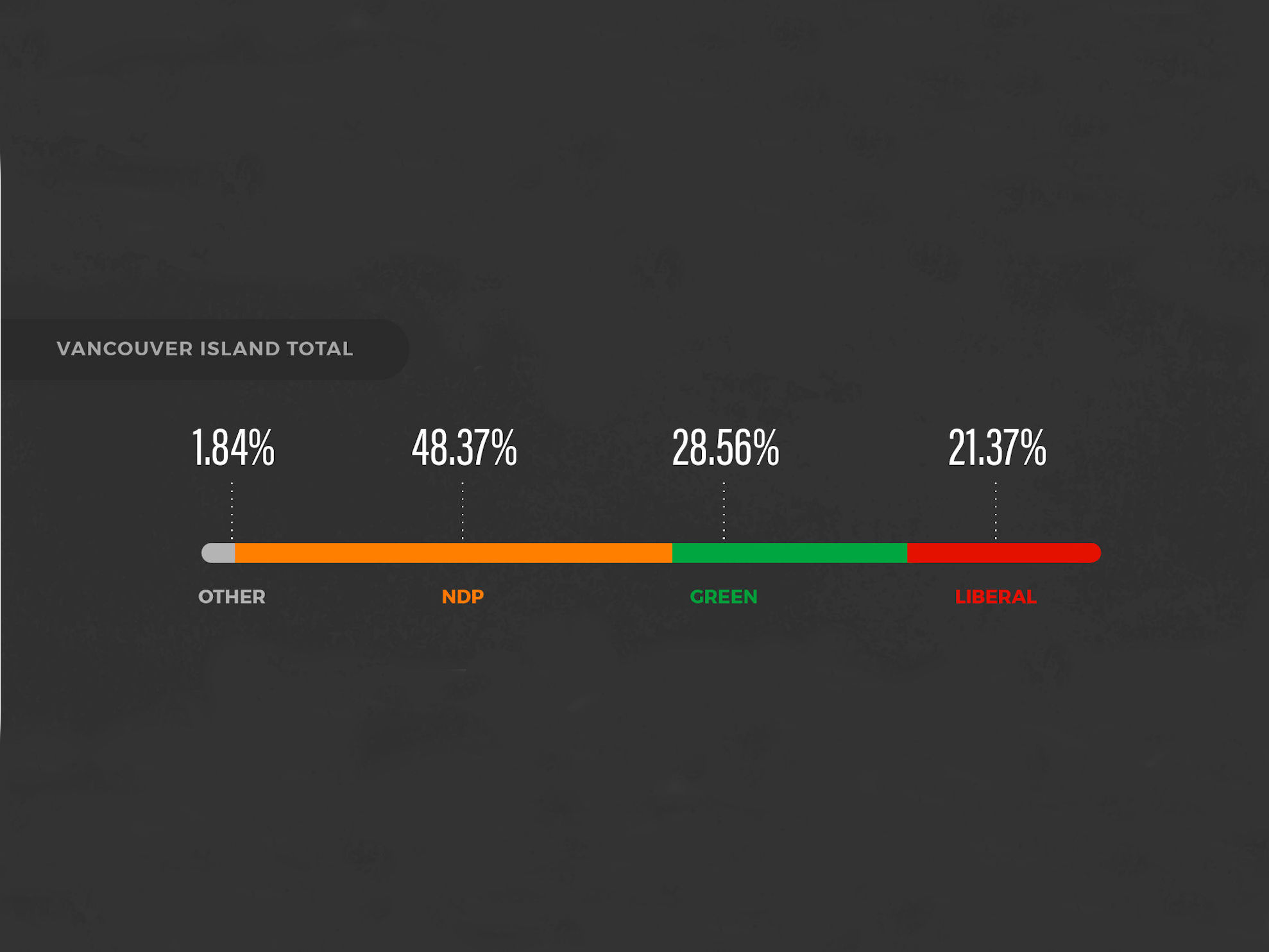 Ad spending, voter turnout and how this would have played out if the Greens' had gotten their proportional representation wishes 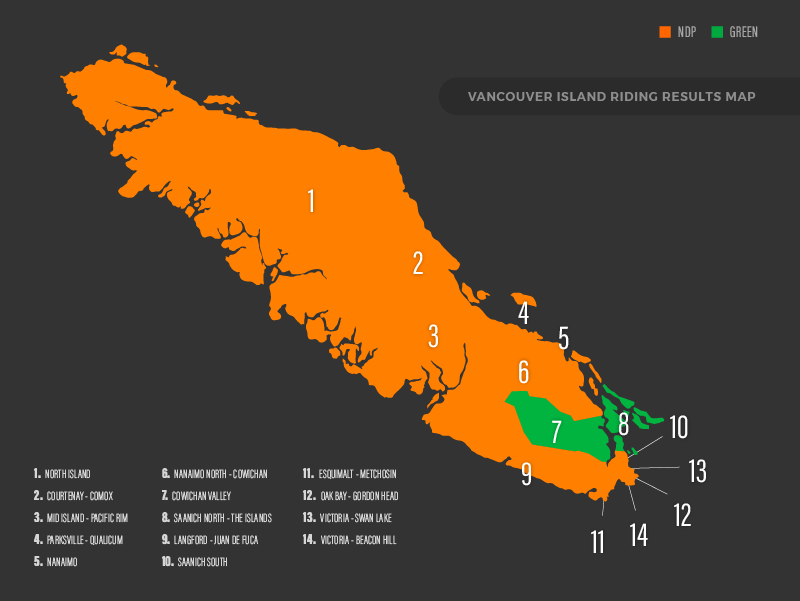 GRAPHIC: How Vancouver Island voted
The NDP took both Andrew Weaver's former seat and the Island's last BC Liberal riding 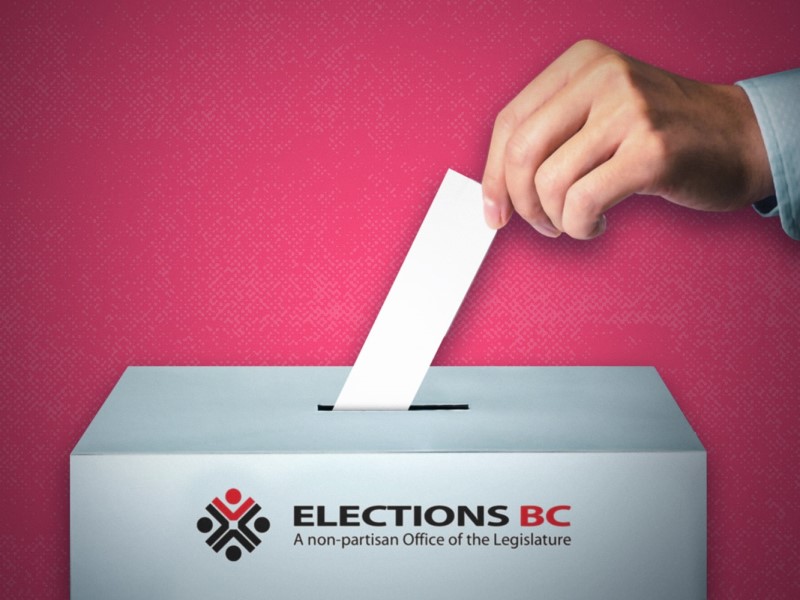 Where the parties stand on key Vancouver Island issues
We asked you to name the election issues that mattered most. Here’s what we found.