August 5, 2021
Get the news and events in Victoria, in your inbox every morning.
Thank you! Your submission has been received!
Oops! Something went wrong while submitting the form. 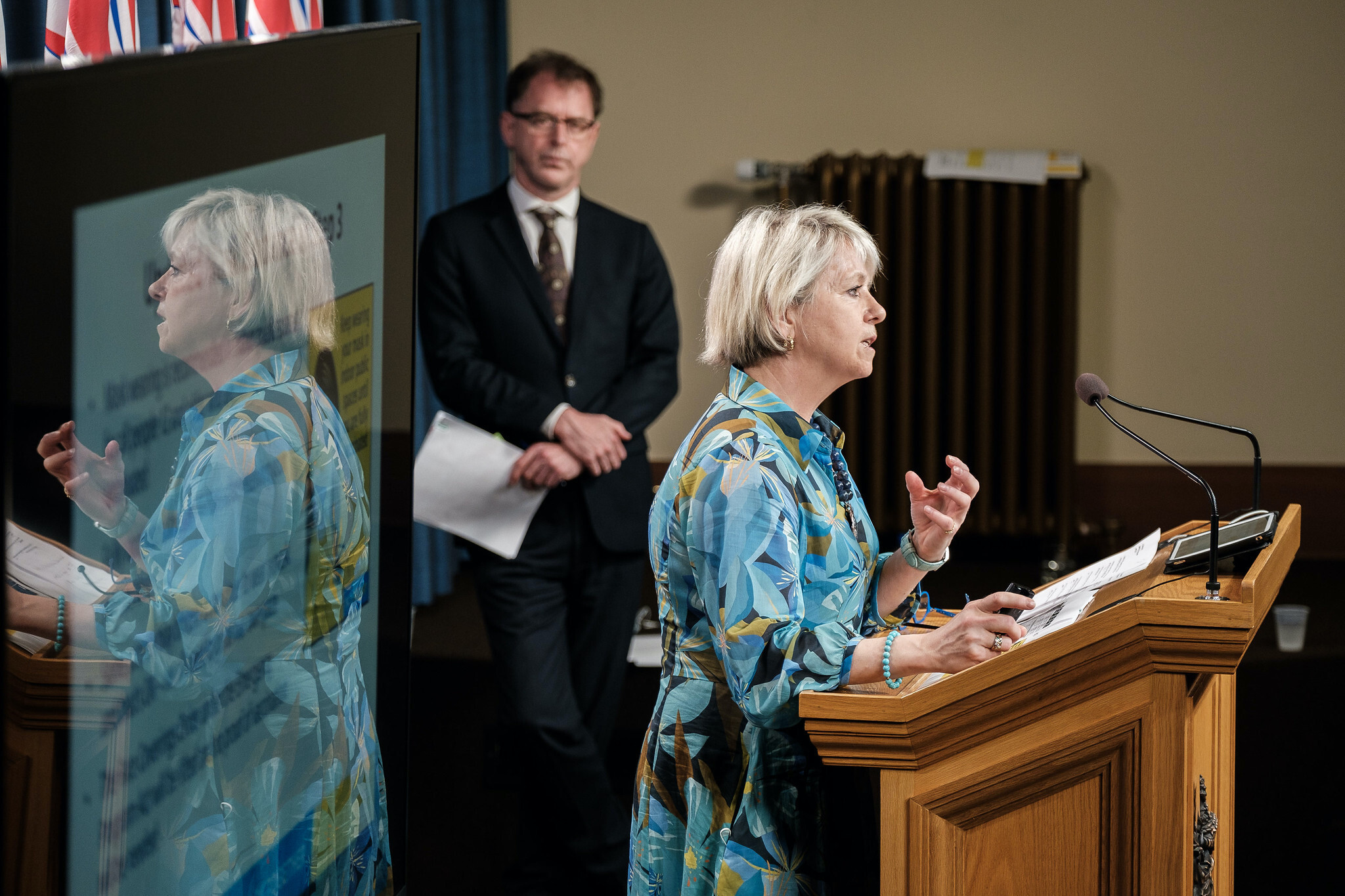 A rapid rise in COVID-19 cases in BC through the month of July and into August has experts concerned about the coming phase of the pandemic, with the Delta variant making up every new case on Vancouver Island for the past few weeks.

Dr. Sarah Otto, a professor of evolutionary biology at the University of British Columbia, along with an interdisciplinary team of independent experts known as the BC COVID-19 Modelling Group, released their seventh report on the state of the pandemic in late July.

It found that while vaccination rates are on the rise, the province has already entered a period of rapid growth in COVID-19 cases propelled by a corresponding surge in Delta variant cases.

“We are at the beginning of a fourth wave,” Otto told Capital Daily, pointing out a graph created by their modelling group colleague, data analyst Dr. Jens von Bergmann, which shows a steady rise in cases in every health authority after most restrictions were lifted in BC on July 1.

The steepest ongoing incline in case counts has been in the Interior Health region—a departure from the last three waves of the pandemic, where Fraser Health accounted for the majority of cases. A total of 742 new cases were recorded over BC Day long weekend, between July 30 and Aug. 2.

Nearly 400 of the cases were in the Interior Health region. Several communities in that region hold the dubious honour of having some of the lowest vaccination rates in the province. Overall, as of July 23, 26.2% of the population in Interior Health remained unvaccinated, compared to 14.8% in Vancouver Coastal, the region that boasts the highest vaccination rates in the province thus far.

The central Okanagan local health area was identified as the main hotspot for virus transmission and, as a result, a local outbreak was declared in that region. While the rest of BC goes maskless, central Okanagan residents are required to wear masks in all public indoor spaces and people from outside the area are discouraged from travelling there until at least Aug. 11.

Otto praises these regional restrictions as “an excellent approach ...to address the rise in cases where they are quickly, rather than wait for many more cases across the province.”

More precautions are still needed in communities with a high vaccination rate, primarily because of the Delta variant, which spreads more easily than others and can be transmitted by vaccinated people.

The Delta variant spreads among vaccinated individuals, most of whom are asymptomatic and don’t know they’re infected, until it finds an unvaccinated host. From there, the virus has an easier time spreading to others who have not been immunized and has a much higher likelihood of landing them in the hospital.

A look at the vaccination status of people hospitalized with COVID-19 in BC proves this point. According to BC Ministry of Health statistics, between June 15 and July 15, 137 unvaccinated people landed in the hospital—just eight fully vaccinated individuals were hospitalized in that period.

The Delta variant has been hard at work in July, rapidly overtaking the Alpha and Gamma variants that were once prevalent in BC. At last count, Delta accounted for 61% of cases in the province, followed by Gamma which made up 28% of sequenced cases.

The Delta variant was first spotted in BC months ago, but unlike jurisdictions in Europe and the US, it did not overtake the Alpha and Gamma variants here until the end of July. This is in spite of the fact that vaccination rates in Canada only just caught up with those in the States and in the UK.

Though it remains a puzzle for experts as to why it took a while for the variant to gain a foothold in BC, there are some theories.

“If we look back in our history… Canada [has] had a lower growth rate for the same level of vaccination; that's saying that we've had less transmission,” UVic physics professor Dr. Dean Karlen told the Capital Daily podcast last week. “So we've been adhering to masking recommendations, etc. generally better than [people] in the United States, while in the United States, they've relaxed most of their [restrictions].”

Nowhere in BC is Delta more prevalent than here on Vancouver Island. Between July 11 and 24, every single COVID-19 case recorded in the Island Health region—a total of 44—has been a Delta case, but it’s difficult for experts to tell why.

“It is hard to say anything quantitatively given the low numbers on the Island, but it's certainly not ruled out that that same transition to higher growth is underway,” Karlen said, suggesting it may take a few more weeks to know for sure what’s happening.

Another factor that makes it challenging for experts, as well as members of the public, to know where and how Delta is spreading is the consistent lack of relevant, timely information shared by the province.

“All we get at the health authority level are partial data releases every week,” Otto said.

The data the health authorities do provide are notoriously buggy, and corrections—when they eventually come—are not precise enough to be useful.

“That makes it really challenging to know where Delta is spreading and how fast.”

What little data we do have access to tells us that Delta is also prevalent in the Interior Health region, making up 89% of cases—about 280 total—in the week of July 18.

However, experts like Otto as well as studies from other jurisdictions find that immunization alone is not enough to protect communities against the Delta variant.

“I think the mixed messages about whether we need to wear masks is really where I would suggest we revise our advice right now,” Otto said. “I advise everybody to wear a mask in indoor crowded spaces—Dr. Henry says that she does personally as well—and that's whether you're vaccinated or not, because of that unknown amount of transmission that may still be happening from vaccinated individuals.”

One recent study in the US found that in a town in Massachusetts where there were 469 COVID-19 cases after large public gatherings, 346 occurred in fully vaccinated individuals. After 133 samples were tested, it was found that 90% of cases were Delta variants.

The authors of the study made a clear recommendation to public health policy makers: it’s time to consider bringing back universal masking in indoor public settings, especially for large public gatherings that include people who have travelled from other areas. As Capital Daily reported Wednesday, many Victoria businesses have kept their mask requirements in place despite the loosening of the provincial requirement.

These findings influenced the American CDC to recommend people who have been fully vaccinated continue to wear masks in indoor public settings. They also recommend “universal indoor masking for all teachers, staff, students, and visitors to schools, regardless of vaccination status.”

No such policies exist in BC at this point, except in the Central Okanagan local health area. Otto says they hope mask mandates will make a comeback for crowded indoor public spaces.

Though the Delta variant is now known to be propelling the fourth wave of the pandemic, there is some good news for those who have been vaccinated.

A preprint paper—not yet peer reviewed—released at the end of July studied breakthrough infections among people who have been vaccinated with mRNA doses, and found that the vaccines are “highly effective at preventing symptomatic and severe COVID-19 associated with B.1.617.2 [Delta] infection.”

This means those who are fully vaccinated are unlikely to end up in the hospital, or even feel any symptoms of the virus if they are infected.

But for the amount of cases in BC so far, Otto says the hospitalization rate is higher than they expected it to be.

They suggest two possible reasons for this: the higher rate may partly be driven by people who are remaining in hospital for longer periods of time with longer-term cases of COVID. It could also be driven by the Delta variant being more virulent and causing severe illness more frequently among unvaccinated people than other variants.

A study of variant and non-variant strains of Sars-CoV-2 in Ontario conducted by Dr. David Fisman, University of Toronto professor in the school of public health, holds some answers.

A preprint of the study, released on Wednesday, found that the Delta variant poses twice the risk of hospitalization, 234% higher risk of ICU admission, and 132% higher risk of death than initial wild-type strains. This includes those who have been vaccinated, but the risk of severe infection among immunized people is far lower  to begin with.

The study concluded that variants of concern are becoming progressively more virulent and easily transmissible despite circulating in populations that are highly vaccinated.

Over the next few weeks, Otto and the BC COVID-19 Modelling Group predict hospital and ICU numbers will continue to rise, especially after BC Day long weekend travel.

“We’re expecting pretty widespread increases as travellers mix up people across the province, but driven first by cases in areas with low vaccination rates,” Otto said.

Over the short term, though, Otto said it’s possible people will respond to the spike in cases, reducing their own contacts and choosing to wear masks indoors. That, they said, is the best chance of avoiding repeating the pattern seen all over the world.