November 22, 2022
Get the news and events in Victoria, in your inbox every morning.
Thank you! Your submission has been received!
Oops! Something went wrong while submitting the form. 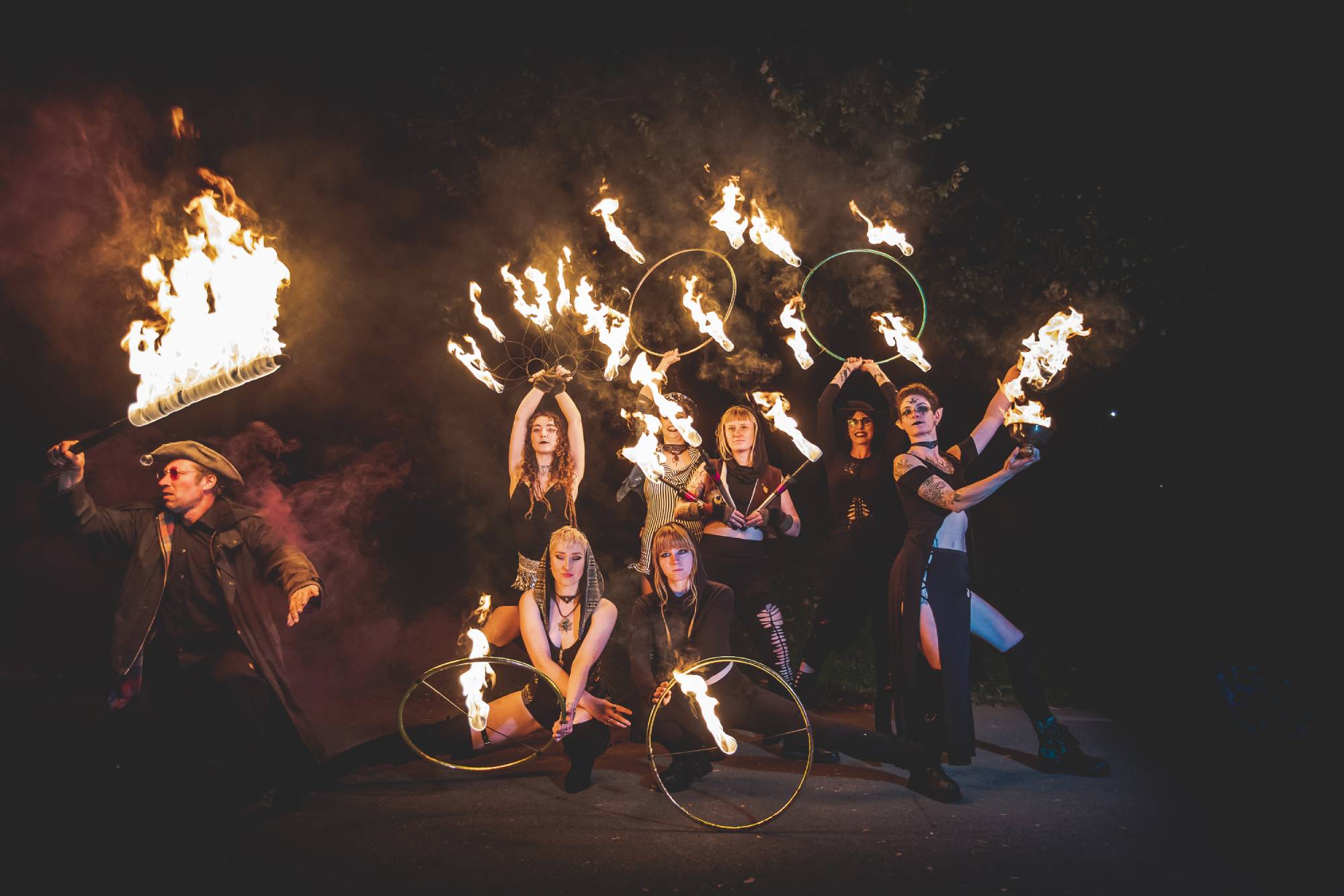 As the skies start to clear on a Tuesday night in October, the faint smell of gas mingles with the low rumble of a drum and bass song emanating from just beyond the border of Fernwood Square. A few steps away, over the hill, balls of flame dance in the night sky.

The Fern Burn Club was co-founded by Kate Tutty, Jacq Kittel, and Mike Hammond in 2020. It meets every Tuesday night from 8:30 to 10:30pm behind the Fernwood Community Centre.

From fire-spinning to juggling or dancing, flow arts (as the art form is called) has become a much more common sight at music festivals. But until now, there weren’t many places dedicated to safely honing that skill in the city.

“There used to be a lot of fire gatherings with fire-spinning that happened under the Bay Street Bridge,” Kittel told Capital Daily. “But it was a lot for one person to organize, and the fire department was called on those gatherings a lot.”

The Bay Street Bridge meetups faded away, but fire performers and people’s interest in the art persisted. They needed space, since “basement suites are not suited for fire spinning,” Kittel joked.

Then in 2020, the Anarchist Book Fair—which is hosted annually at the Fernwood Community Centre—booked fire performers like Kittel. It went well, so the performers asked the centre for permission to keep using it.

Since March 2020, the Fern Burn Club has given a space for people to safely practice fire-spinning with expert guidance from people like Mike Hammond—a veteran fire-spinner who picked the practice up 21 years ago and hasn't put it down since.

In that time, he’s been an official performer at Burning Man. Now, he’s mostly focused on being a dad. “One reason I come here [to the Fern Burn Club] is so my skills don't go downhill,” he said.

Last month, he exclusively used a staff where both ends were dipped in white gas. He spun the staff around his neck and shoulders while bass music played from the club’s new boombox, which Kittel said was purchased with the help of an arts grant from the City of Victoria.

Last year, Kittel said the group received a $1,700 Everyday Creativity grant from the City of Victoria, which provided fuel for an entire year. Hammond says a performer can go through $70 worth of fuel in 40 minutes.

There are steps to take before any fuel gets involved, though, or even a match.

“We recommend people have a baseline understanding of flow arts before lighting anything on fire,” Kittel said.

Capital Daily met Ellery Schafer, a poi fire juggler who uses a type of bean bag attached to the end of a rope to spin fire. She said that before Fern Burn Club, she’d never tried fire-spinning.

“I’d only been spinning [without fire] for four months,” she said. “The idea [of spinning fire] was intimidating, and I came to the jams three or four times before picking up any fire.”

She said the first time she tried it was amazing, and she’s gotten comfortable with flames—to the point that she’s been booked for performances. “I didn’t realize the sound of the flames played such a big part—you really block out everything else around you.”

Each Tuesday night, the Fern Burn Club meets to jam—it’s a strict practice time, and way less about performance. Hammond says coming on Tuesdays is like coming to the dress rehearsal.

“I think some people are still struggling to realize fire-spinning’s actual monetary value—it’s a big problem,” he said. “We put hours upon hours into performances, just like a theatre production.”

As bass music fills the Fernwood skate park, the rain has cleared, and more and more spinners come to join the crew. Even as the seasons change, he expects the jams to keep happening whenever possible. “We’re like cats, if it’s a nice day, we’re outside.”