Tents along Pandora. As part of a plan by BC Housing, encampments are being cleared out and the residents moved to hotel accommodation on Gorge Road (James MacDonald for The Capital).
COVID-19 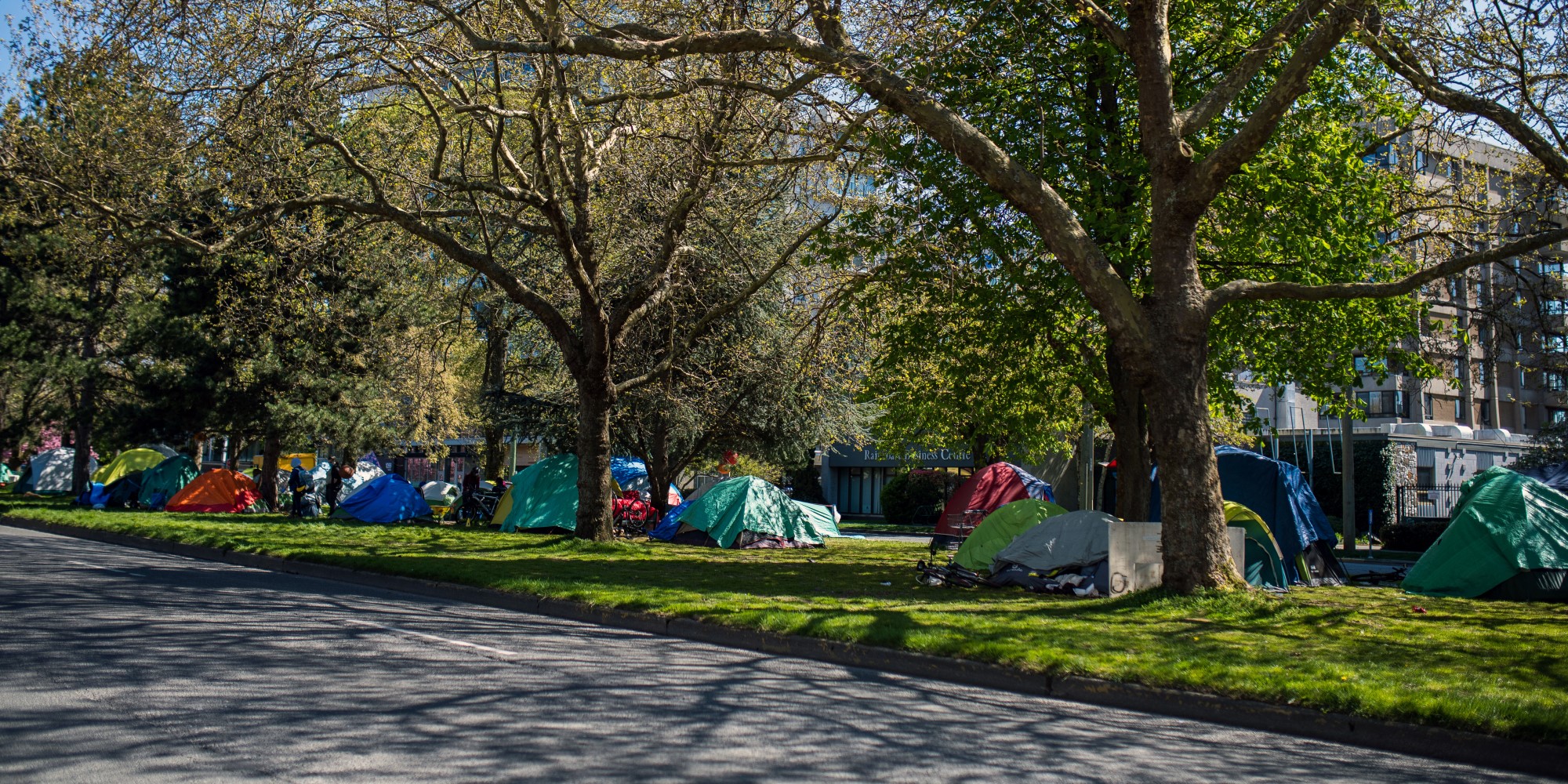 Tents along Pandora. As part of a plan by BC Housing, encampments are being cleared out and the residents moved to hotel accommodation on Gorge Road (James MacDonald for The Capital).

After a city-sanctioned tent city caused an explosion in crime and disorder around Topaz Park, the residents of a new neighbourhood are bracing for the same as they see the encampment’s residents moved into temporary hotel shelters with little or no addiction or mental health supports.

“We are already seeing the effects,” said Gary Barker, who lives next to the Gorge Road Travelodge, one of several hotels selected by BC Housing to shelter homeless communities throughout the balance of the COVID-19 pandemic. “There are a number of issues and it’s visible in the hotel lobby, parks, and sidewalks.”

The names of the hotels in this project have not been officially released, however Howard Johnson on Gorge Road was mentioned by a city staffer during a Council meeting on April 16. The aforementioned Travelodge (also on Gorge Road) has also opened its doors for the project.

Additionally, the B.C. government has purchased the Comfort Inn on Blanshard Street to use as short-term housing for around 65 people from the camps. The sale cost the province $18.5 million.

Victoria's Burnside-Gorge neighbourhood is already home to a disproportionate amount of supportive housing projects. In 2018, citing an increase in "social disorder" BC Housing placed a moratorium on new supportive housing in the area, which is now being temporarily revoked due to the pandemic.

“The current supportive housing model is inadequate,” said Darryl Wilson, General Manager of Days Inn on Gorge Road. “By providing accomodation we are eliminating homelessness but we are not solving the problem—addiction, mental illness, and the crime that stems from these issues.”

Wilson is concerned for businesses, like the Days Inn, who have declined to participate in this project but will still be affected by the move: “We are sandwiched between two [participating hotels] and it’s not a pretty picture. It’s the city’s out of sight, out of mind attitude, and we’re the ones who pay,” said Wilson.

This is not a new issue; in 2017 a group named “Residents and businesses of Lower Burnside Gorge” ran an advertisement in the Times Colonist addressing B.C. Premier John Horgan, stating the prioritization to meet the needs of homeless people with supportive housing had “bulldozed the needs of residents.”

“There are long-standing issues with some—not all—of the supportive housing that already exists and the agencies responsible for them that residents do not feel are being adequately addressed.”

On May 13, a town hall meeting was conducted online via Zoom where a record 180 people attended to voice concerns about personal safety, property damage, break and enters, and other issues people faced who have lived near tent cities—and with good cause.

The day before, Victoria Police Department had reported a 263% increase from March 15 to May 2 in break and enters to residential sheds and storage areas compared with the same period last year.

Many of the residents will come from Topaz Park, the temporary camp site that is being closed due to the “severe and serious escalation of crime” according to Victoria Police Chief Del Manak. Burnside-Gorge residents are concerned that moving homeless people will migrate these issues. Those in Victoria’s other temporary camps will have until May 20 to relocate to indoor accommodations.

Resident Gary Barker has witnessed discarded needles, groups of people drinking, and garbage piling up in public—in violation of the COVID health mandate, the primary reason for this project.

On May 15, The Capital visited the Gorge Park Howard Johnson hotel and witnessed a number of people in apparent mental distress loitering in the carpark as well as debris including drug paraphernalia scattered along the sidewalk.

“It is very clear to me this is not being supervised properly. I walk into the hotel lobby and the pandemic guidelines are not being observed. There are no face masks, no social distancing,”

“I keep an open mind. It would be great if this could work but from what I see, it’s same old same old,” said Barker.

With residents reasoning that it’s too late to affect BC Housing’s plans, many Burnside-Gorge residents, like Barker and Cull, are now simply planning on how to deal with the influx.

“While we understand why this decision has been made due to the pandemic, we wish they [the unhoused population] could have been more distributed,” said Cull. “Our job now is—what do we need to put into place to ensure this area is safe and welcoming for everyone?”

“This is a short-term fix but we don’t know what short-term will mean,” said Cull.