The Neskowin Ghost Forest in Oregon; one of many stands of dead trees on the West Coast killed by the effects of a violent 1700 earthquake and tsunami (Flickr.com/Rob DeGraff).
Disaster 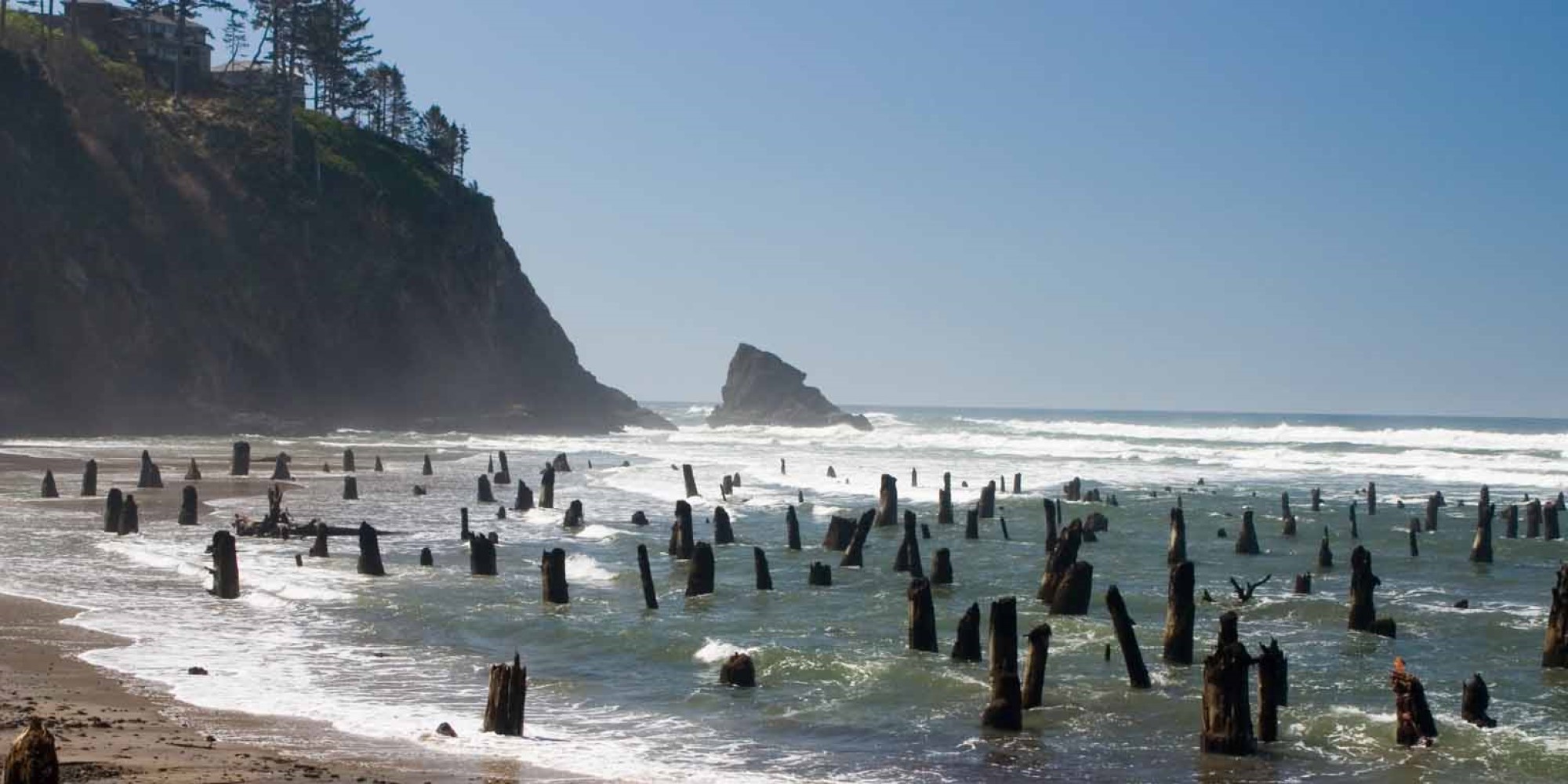 The Neskowin Ghost Forest in Oregon; one of many stands of dead trees on the West Coast killed by the effects of a violent 1700 earthquake and tsunami (Flickr.com/Rob DeGraff).

As the legend goes, about 300 years ago a Hesquiat traveller was in the mountains when he was lured into a cave by the jovial songs and dances of two smiling little mountain dwarves. Eager to join in on the fun, he accepted the mischievous hosts’ invitation.

They sang and danced together around a ceremonial drum until the man grew tired and after sunset, kicked their drum. This simple set of events cascaded into the man becoming inflicted with a disease called Earthquake Foot, where every step he took caused great tremors throughout the region, tearing up the land and forming gigantic waves that breached coastal settlements all the way from northern Haida Gwaii down to what is now California. Those who made it to canoes or high enough ground were forced to watch as those who couldn’t escape were killed by waves dragging them and their settlements out to sea.

The story describes real events: In the year 1700 around 1,000 kilometres of the Cascadia Subduction Zone had slipped 22 metres under the Pacific Ocean. The sudden shock had the earth shaking for five minutes straight, causing earthquakes at a magnitude of between 8.7 and 9.5 on the Richter scale and sending out catastrophic tsunami waves that could have reached as high as 30 metres. The event was so large that Japanese chroniclers more than 7,600 kilometers away recorded an out-of-the-blue tsunami on their own shores. It’s from these records that we know that the tsunami happened just after midnight on January 26, 1700.

Seismologists predict there’s a 21% per cent chance the next “‘Big One”’ will hit the Canadian West Coast in the next 50 years, levelling historic downtowns and ravaging unprotected coastal communities like Tofino. This is the story of the last time seismic destruction visited the part of the world now known as British Columbia.

“The land shook … a big wave smashed into the beach … They had practically no way or time to try to save themselves,” said Chief Louis Nookmis from Pachena Bay  just before his death in 1964, describing events that had occurred in his great grandfather’s time.

The waters rose so swiftly that it seemed that no humans would be able to survive. So Raven transformed himself into an orca spirit and began his search under the wild stormy waters, throughout the human villages of the west coast, looking for any sign of life. Many days passed but Raven had no luck in his underwater search for survivors of the great flood. He flew up to the top of a great cedar tree, and for the first time in his Raven life, tears emerged from his eyes. Would he have start all over again? Then suddenly there was a strange noise behind him. "Mouse Woman?" He said faintly.

“At night, a massive wave cut through the darkness and every single person living in Pachena Bay was lost.” Only those who lived in an upland area called Ma:lts’a:s (House-Up-Against-Hill) avoided total destruction. “They did not drift out to sea with the others,” said Nookmis.

Nookmis' account comes from a 2005 paper by anthropologist Ruth Ludwin, which catalogued oral histories of the 1700 quake from all along the Pacific Coast. One unidentified 1860 informant describes a tide which "rushed up at a fearful speed." Annie Miner Petersen from Southern Oregon said in 1910 "my grandfather saw one of the old women who had been left alive. She had been hung up on a tree, and the limbs of that tree were too high up ... she was just a girl when she fell from it. Her back was broken from it, and she had a humpback thereafter."

Hereditary Chief Guujaaw of the Raven Clan on Haida Gwaii said most stories about these disasters have a moral tied in. He told Capital Daily an account, likely tied to the 1700 tsunami, of a canoe passing by a strange village, only to find itself being pursued by hostile members of the village. Rather than risk becoming captive, the people in the canoe all threw themselves overboard and drowned. That night, the avaricious villagers were punished with a devastating tsunami that not only destroyed their settlement, but washed up Dentalium shells on the beach of a rival clan, making its chief wealthy.

It wasn’t until the last few decades that seismic researchers were ready to accept that these accounts were anything more than myth; a Pacific Coast version of the Noah’s Ark tale.

The signs of the 1700 disaster are so subtle that it took Western scientists until the 1980s to confirm that an immense cataclysm had indeed occurred on the North West Coast; a region that, since the arrival of Europeans, had shown itself to be comparatively stable. But the evidence is there: There is a “ghost forest” of dead trees in Washington State caused by a sudden deluge of salt water. There are fossilized root structures underground pointing to some violent event that flattened whole stands of trees. There is evidence of unusual wear on rocky coves. And all throughout the coast, there are layers of coastal sand where it shouldn’t be.

UVic archaeologist Quentin Mackie and his colleagues have worked on a site at Triquet Island in the Hakai Protected Area south of Haida Gwaii. A continuous home to humans for more than 14,000 years, there are some places along the shoreline where human artifacts can be found up to seven metres underground.

Except, Mackie has found scattered clues of periods when the island was not being visited by humans, and he thinks it’s evidence of tsunamis that killed or displaced massive numbers in the region. “They came back, so it might have only displaced them for, well, who knows? A week? A decade? It's impossible to say at this point.”

Despite the hazards, people returned to the sites not just for the easy access to food, but because rites and power were often tied to physical location, said Simon Fraser University-based archaeologist Alan McMillan.

“From the archaeological material, I think people reoccupied many of these sites quite quickly. A site on a good location might have a gap of generations, but it would be reused,” he said. Just as the English aristocracy derives their titles and standing from land, the same was true of the ancestors of today’s Heiltsuk Nation. “There would be a strong incentive for high status families to relocate to their ancestral villages, because that's where they derive their identity and their ceremonial privileges.”

Before the arrival of Europeans and the devastating outbreaks of disease that followed, what is now the BC coast was one of the most densely populated corners of the Western Hemisphere. BC Anthropologist Robert J. Muckle estimates in his 2007 book, The First Nations of British Columbia, that roughly around the time of the 1700 tsunami there would have been upwards of 250,000 people living prosperously on Vancouver Island and around the Salish Sea.

West Coast tsunamis haven’t always been due to “Big One-level” earthquakes. Landslide-generated tsunamis have also been a recurring threat, unlocking the destructive potential of tonnes of rock and silt uneasily deposited on the tops of BC mountain ranges by retreating glaciers.

UBC researcher Duncan McLaren authored a report in 2007 that found one such landslide-induced tsunami event having occurred 400 years ago in Knight Inlet, just 250 kilometres north of Vancouver.

By digging at the site, McLaren found soil intermixed with ground mussel shells (the best-preserved evidence of the hunter-gatherer inhabitants) just 20cm just below a telltale thin layer of sand. Above the sand there are no shells, meaning that unlike other sites, this one was never re-occupied.

“About three generations ago, or possibly at an earlier date, a large portion of rock across Kwalate Point slid into the inlet, causing a huge tidal wave which wiped out all of the inhabitants of the village opposite,” Forrest Johnson, a man living near Knight Inlet told the filmmaker Francis Barrow in 1935. “Many of the bodies were picked up, and they were buried half way up the cliff at Deep Sea Bluff, close to the entrance of Simoom Sound."

Just outside of the inlet are a set of red pictographs drawn onto a granite rock face thought to memorialize the victims. According to Johnson, it was placed there in memory of the many chiefs who lost their lives in the cataclysm.

“The problem with these mega events ... is the distance between them is longer than individual lives,” UBC Museum of Anthropology curator Jennifer Kramer. “If you don't pass down the memory of these events in some way, whether it's writing, song, dance, through masks, art, or narrative, then you're going to forget and be surprised when the next one hits.”

And in BC, stories have an incredible staying power. In 1997, McMillan, an archaeologist who’s provided expert testimony on BC Indigenous rights cases, found a written record of an oral story in the BC Archives that may well have survived 14,000 years — longer than the Bible, Beowulf, and even the Epic of Gilgamesh. Humans were definitely around the region at the time. Bear caves have been discovered near Haida Gwaii containing 13,000-year-old spear points and bone tools; artifacts from a time when the ocean was 150-200 meters lower, and the Okanagan was covered by 2 kilometres of ice.

The story says that “in the beginning there was nothing but ice and sea with a narrow strip of land” — a perfect description of what BC would have looked like at the end of the last ice age.  “Now that may be anthropological wishful thinking, but it's a damn good description.,” said McMillan. The tsunami of 1700 may be the most recent seismic tragedy visited upon this part of the world, but those unlucky enough to have lived through it were likely the descendants of peoples who had dozens of times witnessed the horror of an angry sea coming for everything they knew.

The one thing that could save Tofino