February 10, 2021
Get the news and events in Victoria, in your inbox every morning.
Thank you! Your submission has been received!
Oops! Something went wrong while submitting the form. 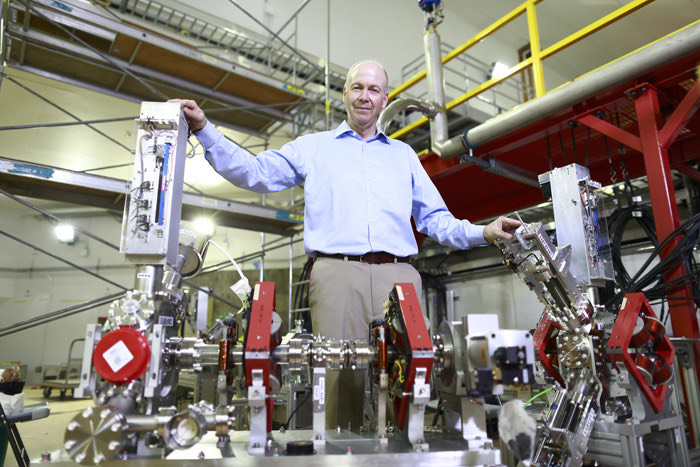 Many British Columbians were shocked when the provincial government extended its restrictions “indefinitely” on Friday. But not Dr. Dean Karlen.

For the past 30 years or so, Karlen, a particle physicist, spent most of his time unraveling the mysteries of the universe. But since COVID-19 arrived in BC, the UVic professor has turned his data analysis skills to understanding the pandemic, not just in BC but across North America and other countries.

Since March 2020, Karlen has been collecting multitudes of data about COVID-19 cases across these jurisdictions and using them to predict the trajectory of the pandemic.

Physics is surprisingly applicable to studying a pandemic.

“In doing our research, we build experiments with international collaborations, we collect data, analyze that data and try to understand how the universe works at a detailed level,” Karlen says.

“It's not directly related to epidemics…[but] understanding data and modeling complex systems—that's the connection.”

When the pandemic arrived in BC, Karlen was one of many scientists and experts around the world who shifted their research work to focus on understanding the virus.

Thus far, his models have been consistently ranked the most accurate through internal evaluations conducted by various groups who report projections to the U.S. CDC, beating out around 40 other teams including tech giants like Google and Facebook who are attempting to do the same kind of work.

The models are evaluated and ranked simply based on whether or not they accurately predicted COVID-19 cases weeks after they were made.

These rankings validate the approach that a physicist takes compared to others doing the same work, Karlen says.

“Others are trying to use all kinds of interesting data such as cell phone mobility data, records of insurance, and weather and many other things to try to better forecast,” he said.

“But right now, those aren’t bearing fruit in terms of making more accurate predictions with the future, as compared to simpler models like mine that use simple assumptions and just basic trends.”

For journalists and observers, Karlen’s models are one to watch, as they are updated once a week—far more frequently than the provincial Ministry of Health’s once-a-month epidemiological updates.

They’re also particularly crucial to keep up with now that factors like more widely transmissible variants and administration of vaccines have entered the scene, and can push the trajectory of the pandemic in either direction over the next few weeks.

"We are on a good trajectory, but it could change very quickly," provincial health officer Dr. Bonnie Henry said at a press conference on Friday where she announced that current restrictions on social gatherings and activities that were set to expire on Feb. 5 have been extended indefinitely.

"If we start to see one of these variants take off, then all bets are off and we may actually increase some of the restrictions we have in place.”

Data about variants is not something Karlen gets from the BCCDC. Like the rest of us, he relies on information provided to the public during semi-regular press conferences and on the BCCDC website.

As a result, his predictions factor in fewer parameters than those shared by public health officials, but have thus far always ended up being accurate.

For example, on Feb. 2, Karlen updated his analysis to predict that the Vancouver Island Health region would reach up to 450 new COVID-19 cases per week by mid-February. In a month, he says we may be averaging up to 60 new cases per day.

Another model shows how Karlen accurately predicted where the pandemic would head towards in BC.

The green trendline and range in the diagram below are a projection he created on Dec. 24, and the black stars represent COVID-19 case numbers collected after the forecast was made, in the rest of December and January.

There are some limitations to what his models can tell us. Unlike the BCCDC, Karlen has no way of knowing what public health policy is coming down the pipeline next, and so can’t use that information to inform his projections.

“I build my models from the perspective of a physicist,” Karlen said. “These models are built for the purposes of analyzing data and in so doing, trying to make these models as simple as possible, [with] as few assumptions as possible.”

That lack of granularity may actually be one of Karlen’s strengths in his ability to make accurate predictions: Instead of taking into account different parameters, like how different age groups interact, for instance, the professor lets the data speak for itself.

“I think it helps that I'm coming from that perspective where you strictly use data to tell you what the future is going to bring us, to some extent, and not to put in too many assumptions where we can't really measure those,” he added.

That’s not to say Karlen doesn’t incorporate a lot of data. He currently accounts for COVID-19 case numbers, hospitalizations, and deaths across dozens of jurisdictions to build his models.

In the coming weeks, as vaccinations start to ramp up and the spread of more easily transmissible variants of the virus looms on the horizon, Karlen will be factoring those major developments into his predictions.

Once more people have been immunized against COVID-19, the fraction of the population that is susceptible to contract the virus will decrease.

To measure the impact of potential spread of a variant, the professor plans to extrapolate data from what we already know about how the B117 variant spread in the UK to figure out what transmission will look like in BC.

Variants ‘not something we can easily track’

Overall in BC, if everyone who has the original strain of the virus now had instead contracted a more transmissible variant, case rates would be increasing by approximately 6% per day.

“The difficulty, though, is that the growth of that variant is not something that we can easily track and see coming,” he said.

“The delays in genomic testing and the small fraction of the sample being tested make it difficult to actually have a good understanding of where we stand right now with the variants—but they do pose a serious risk.”

As of Friday, Feb. 5, there were 19 cases of the UK variant and nine cases of the South Africa variant for a total of 28 cases of variants detected in BC—up from 18 cases reported four days prior.

The origins of those infections are still unknown.

Since Dec. 1, the province has conducted whole genome sequencing—the method to detect whether a COVID-19 case is one of the strains that is transmitted more easily—on 4,500 positive cases out of 35,632 as of Feb. 5.

Right now, the province has the ability to sequence 750 genome samples each week, but public health officials announced Friday they are working to increase the capacity and to be able to sequence thousands of cases per week in the near future.

“These [variants] are of concern because they have increased transmissibility and there’s some concern that [for] the variant from South Africa… the vaccine may not work as well,” said Dr. Bonnie Henry.

As more information about variant cases emerges in BC when surveillance measures are ramped up, Karlen’s models will begin to reflect how they are spreading in our communities.

But his work doesn’t stop at BC.

In addition to keeping an eye on things here, Karlen also monitors and models the trajectory of the pandemic across eight other Canadian provinces, 50 U.S. states plus Washington, D.C. and Puerto Rico, 16 states in Germany, Brazil, and Israel.

Keeping all his projections updated on a regular basis is no small feat.

“I do generally try to look once a week, but it is hard to keep up with that. You have to be pretty well organized in order not to confuse everything,” he said.

And while he hasn’t added up just how much time he spends on this project, Karlen says it takes six hours per week to tackle the U.S. alone.

“This is consuming most of my time now. It’s not that I've dropped my other research projects, but I’ve certainly cut back on them while I'm focusing my attention on this, generally working long hours.”

In closing her announcement on Friday, Dr. Henry noted that to determine when restrictions can be lifted, she will be reviewing the data continuously to keep track of how the pandemic is progressing in BC.

Without the impediment of needing to create public health policy—but adding the Herculean task of surveilling dozens of jurisdictions at a time—Karlen will be doing the same thing.

Halle's most recent work, The Royals Next Door, has been optioned for a movie