December 9, 2022
Get the news and events in Victoria, in your inbox every morning.
Thank you! Your submission has been received!
Oops! Something went wrong while submitting the form. 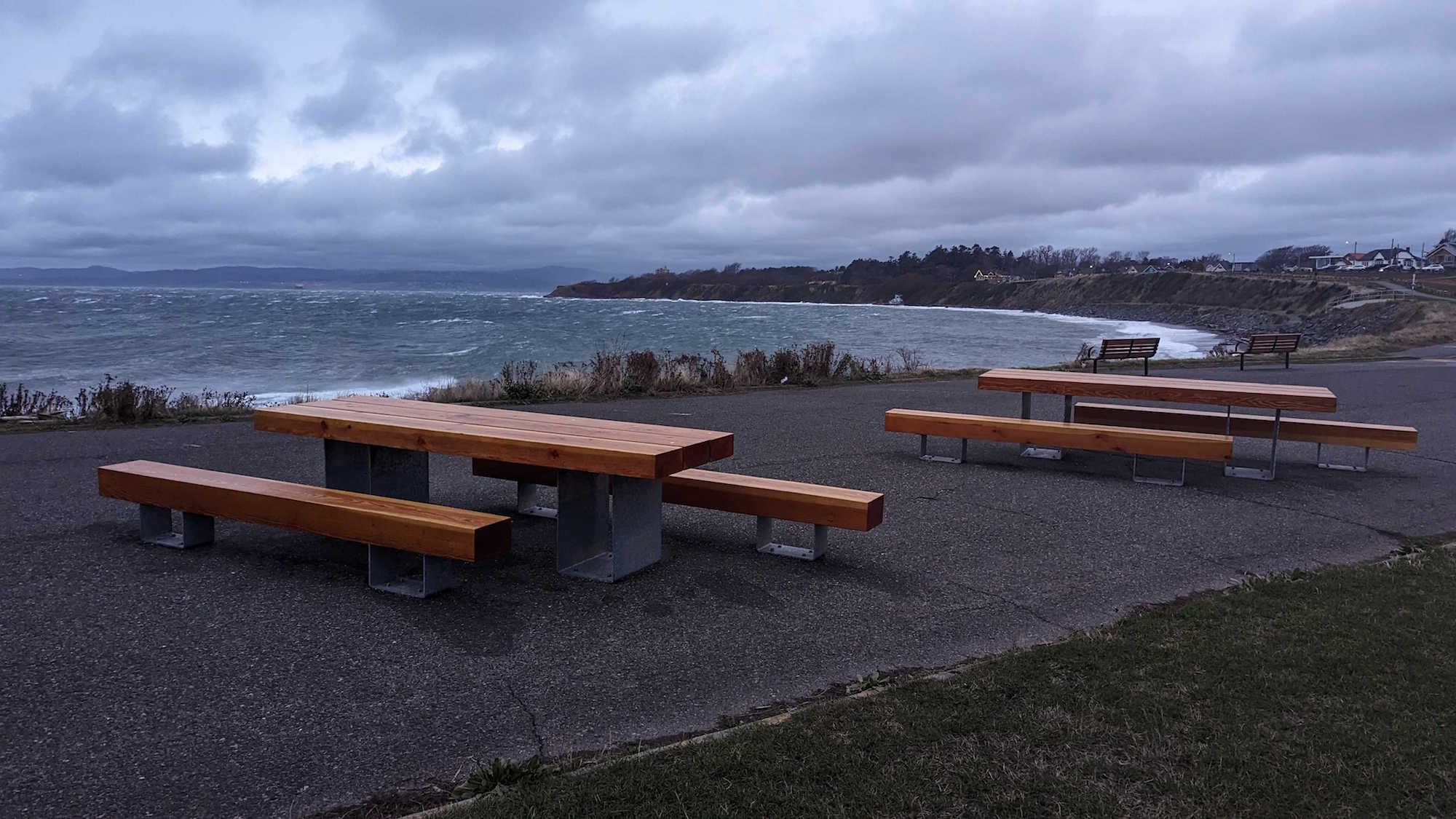 A new kind of picnic table is rolling out across Victoria: so far, they can be found at Songhees Point, Clover Point, and Topaz Park, among others; there’s even an oversized, 20-foot harvest table version of the new design near the Ross Bay cemetery.

But the new design is causing some confusion. In response to a tweet about the tables, many users jumped in to accuse the city of wasting money, installing the benches incorrectly, hiring expensive outside designers, or using an inaccessible (or even nonsensical) design.

We spoke to the City of Victoria to understand their intention. Justin Dykstra, Victoria’s manager of park design and development, explained the process behind the picnic tables, an in-house creation from the city of Victoria.

The table designs came from the Dallas road balustrade redevelopment project, which needed new picnic tables. “Rather than order them and purchase them from the manufacturer, we just decided to come up with our own design, something that could be replicable and used on an ongoing basis,” Dykstra said.

The typical picnic table in Victoria is an all-in-one unit, with benches attached to the tabletop.

“That connection point introduced a bit of an obstruction for getting in and out,” Dykstra said. The new standards place accessibility first, offsetting the benches from the table.

“We’ve added some extra length,” Dykstra said. “And that provides an extra two wheelchair accessible seats at the table—and those seats don’t just occur at the end.”

Dykstra—whose background is in landscape architecture—said that during the design development processes, they considered use cases for children as well as taller people like Dykstra, who is six-foot-two.

It ended up being a cheaper option as well; purchasing comparable picnic tables would have cost $11,000 to $12,000, while, depending on the fluctuating material costs, making it in-house only costs around $5,600 to $6,200.

There’s no dedicated picnic table replacement budget at city hall. Rather, the new tables are being installed during capital projects, wherever a picnic table should go.

The design—now a city standard—has been in use since 2020. There are about 12 to 14 of them, most of them installed along Dallas Road.

Dykstra had previously worked with parks in Vancouver, where he saw money for park furnishings go to external vendors that sourced many of their products from the United States or Europe. That’s not the case here.

“Even the lumber is local—Island-produced timber,” he added. The tables use hefty 5.5-inch-thick planks of Red Cedar and Douglas fir for the tabletop and benchtops, largely procured from small-sized mills on Vancouver Island.

There’s just one exception to the local manufacturing process: there’s no galvanizing plant on Vancouver Island, so the bench and table bases have to be sent over to the Lower Mainland for a galvanizing process to strengthen the metal from the elements. Otherwise, the intent is for the manufacturing to stay close, keeping carbon costs low and money within the local economy, Dykstra said. Everything else is made in-house by city carpenters and metal fabricators in batches of six.

“The beauty of them is that they’re very resilient. The size of the timber that we’re using is something that will stand up for a very, very long time,” Dykstra added. “Because they’re so beefy, you can continue to sand them down periodically to renew the surface without replacing things.”

The new picnic tables have already seen creative and flexible uses that weren’t possible before with the old designs.

“We have found that the benches [that are] sticking out are really well used by parents with children in strollers,” said Dykstra. “They will fit on the extended bench with their child in front of them in the stroller, and be able to use the adjacent tabletop when they’re stopping to feed their kids or for hanging out face-to-face.”