Four Victoria lakes you can bike to this weekend
Business
News
Based on facts either observed and verified firsthand by the reporter, or reported and verified from knowledgeable sources.

July 19, 2021
Get the news and events in Victoria, in your inbox every morning.
Thank you! Your submission has been received!
Oops! Something went wrong while submitting the form. 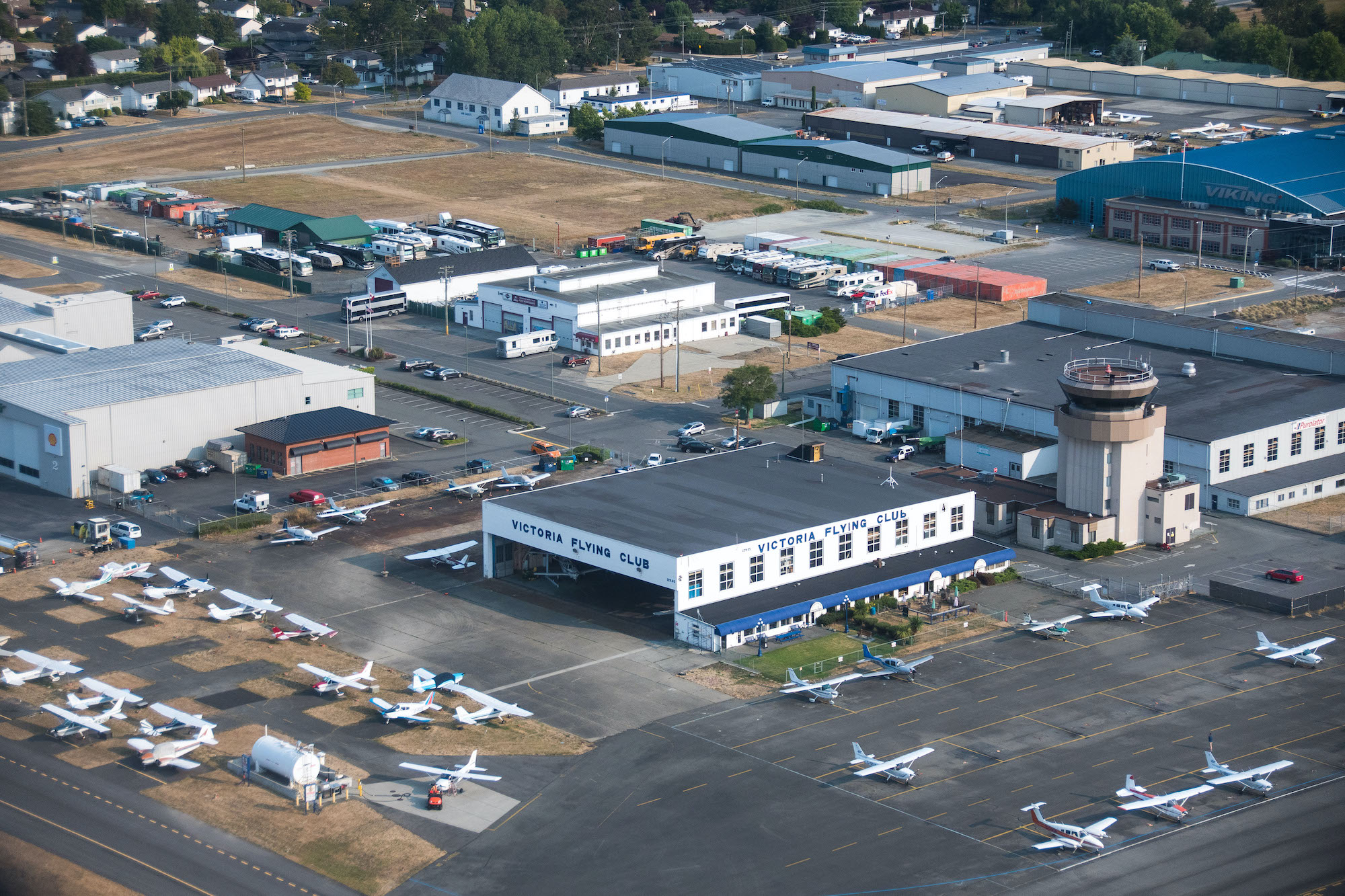 Gregory Matte’s favourite part of flying is the freedom that comes with coasting in an aircraft. Being up in the air makes him feel like a bird, and he loves being able to touch the clouds or see the sun even on an overcast day.

Growing up, however, he didn’t want anything to do with flying.

His father was in the military, and Matte had no desire to follow in his footsteps. Matte wanted to stay on the ground and become a forest ranger for Parks Canada, but he couldn’t afford to go into university. So, his dad suggested he attend military college—a setting that would ultimately foster his love of flying

Matte ended up working in the Canadian Forces for 29 years before retiring in 2010. After working in the private sector and completing his PhD in public policy and administration at Carleton University in Ottawa, Matte was drawn to Victoria in the summer of 2019 to serve as general manager of the Victoria Flying Club—a flight school based at the Victoria International Airport that’s been in business since 1946.

Specifically, Matte was interested in helping the next generation of pilots accomplish their flying dreams.

“I personally feel very fulfilled to be assisting youth in their desire to pursue their career in aviation,” Matte said.

The Flying Club’s flight school operation can be broken down into three parts: ground school, solo training, and dual training. Ground training is the lecture-based portion of the school, while dual and solo training give the pilot a chance to put their classroom knowledge to the test.

Matte says that dual training classes account for 75% of their revenue, and he estimates that half of the 650 total members of the Flying Club are students looking to gain flight licensing or improve their flight rating.

“You can do the academic part either self-study or in ground school, but when it comes to the actual aspects of flying, this is a vocational skill that you have to see demonstrated and have to perform,” Matte said.

When the pandemic hit in March 2020, perhaps like many other businesses or industries, the Flying Club had no roadmap on how to navigate the turbulence.

They had trained professional and recreational pilots for over seven decades without disruption until COVID-19 forced them to shutter their training school for about nine weeks last year.

While they had other components to the business—including charter tours, fuel services, and aircraft parking—without flight school, Matte was concerned about the club’s future.

“At that point, we did a full-scale assessment of our recurring costs—whether we flew or not—and our revenue. We quickly discovered we would become insolvent in no time if we didn’t find a way to continue flying,” Matte said.

“We would have to shut down, and this was a club that had been active for almost 75 years.”

The aviation industry has been one of the hardest hit sectors during the pandemic. A study by the International Civil Aviation Organization found that COVID-19 caused airlines globally to lose over $300 billion compared to their 2019 revenue.

The Victoria International Airport reported passenger volumes were down as much as 98%, leading to a net loss of $8.2 million in 2020. In the airport's 2020 annual report, the aviation sector predicted that 2019 levels of flying would not return until 2023 or 2024.

In the midst of pandemic uncertainty that March, Matte monitored the Centre for Disease Control and provincial briefings on a daily basis, and drew up ideas to implement a plan that would allow for the resumption of dual training.

In May, after a thorough policy involving mask-wearing and frequent sanitization, the club got approval to run courses again.

“There was no roadmap, no playbook; we had to make it up as we went along,” Matte said. “But the end result was that not a single person got sick of COVID-19.”

There are signs that the airline industry is bouncing back. In the US, air travel accounted for over 14 million trips in March, a 29% year-over-year increase. Delta airlines also announced plans last month to hire 1,000 pilots by next summer to support their post-pandemic recovery.

In June, the Victoria airport announced a deal with WestJet-owned Swoop to reinvigorate domestic travel. The plan has brought two Swoop direct flights per week from Toronto to Victoria, and the airline promises to increase that number to six per week in August.

Prior to the pandemic, Canada was dealing with a pilot shortage. In those normal times, business and commercial magazine Wings estimated that there wouldn't be enough pilots to meet consumer demand as a result of wages and the high cost of aviation training.

While the decrease in travel demand due to the pandemic masked the issue, an American consulting firm conducted a report earlier this year that the pilot shortages will still be a global problem as regular travel returns.

Similarly, Matte believes the airline sector will grow quickly, and that graduating pilots will be entering a landscape where businesses will be looking for pilots.

As someone who worked in the military, Matte has colleagues who left the armed forces to become commercial pilots. When the pandemic halted airline travel, he says, quite a number of those pilots retired because they were out of a job and didn’t want to undergo months of simulator training in order to get back into the cockpit.

“As the updraft of demand for travel picks up… not only will airlines have the shortages they had before, but they’re going to have a compounded shortage of senior pilots that will have retired,” he said.

This year, Matte says, the Flying Club has seen a strong demand for their beginning and advanced pilot licence training programs.

To respond to the commercial pilot demand, the Flying Club has expanded some of the topics covered in ground school courses—such as adding a drone training and certification program—and have already hired a new flight instructor with plans to hire a few more in the coming weeks.

At the end of the day, he sees present opportunities for young pilots to make their mark in the industry.

Gregory Matte: Well, at the moment, opening the international border.

Matte: The possibility of another unforeseen, what we call in macroeconomic terms, exogenous event. In other words, an event beyond our control that could do the same thing that COVID-19 did to us.

It could be a number of things. Just to shut down the world supply chain, for instance when the Ever Given ship got stuck in the Suez Canal, that affected global supply chains including ourselves. We could not get crankcases for engine repairs for six months. The global supply chain is very fragile, and we’re a very interdependent world. There’s a number of things like that you can plan for, I suppose, but it’s not up to the Victoria Flying Club to plan for a global pandemic. That’s a national responsibility.

Matte: The industry itself. The demand is strong, I personally feel very fulfilled to be assisting youth in their desire to pursue their career in aviation. I’ve already had quite a career, but it’s very rewarding—and I think I speak on behalf of my flight instructors as well—to help someone achieve their dream and coach them along through the steps they need to follow to get their commercial license, and eventually go on to fly with Air Canada, Jazz, or whatever they want to do.

Matte: That’s a tough one because I’ve only been here for three years. I don’t know, Jim Pattison.

Matte: If I was to run another business, I would be the chief executive officer of a postsecondary training institution—whether university, college, or vocational training centre.

What, if anything, did you learn from the pandemic about your business?

Matte: How fragile it is financially.

Matte: As an organization, we failed to plan for a rainy day financially. Even though we are a non-profit, non-profits are allowed to have a cash reserve for eventualities like [COVID-19], and we did not plan for that.

What do you wish you knew before starting as general manager of the Victoria Flying Club?

Matte: That would be something we’d share over a beer [laughs].