A Vancouver Island child gets a vaccination in Port Angeles on Nov. 12. Photo: Tom Jackman (Submitted)

Greater Victoria rental prices make biggest leap since 1991: CMHC report
COVID-19
News
Based on facts either observed and verified firsthand by the reporter, or reported and verified from knowledgeable sources.

November 17, 2021
Get the news and events in Victoria, in your inbox every morning.
Thank you! Your submission has been received!
Oops! Something went wrong while submitting the form. 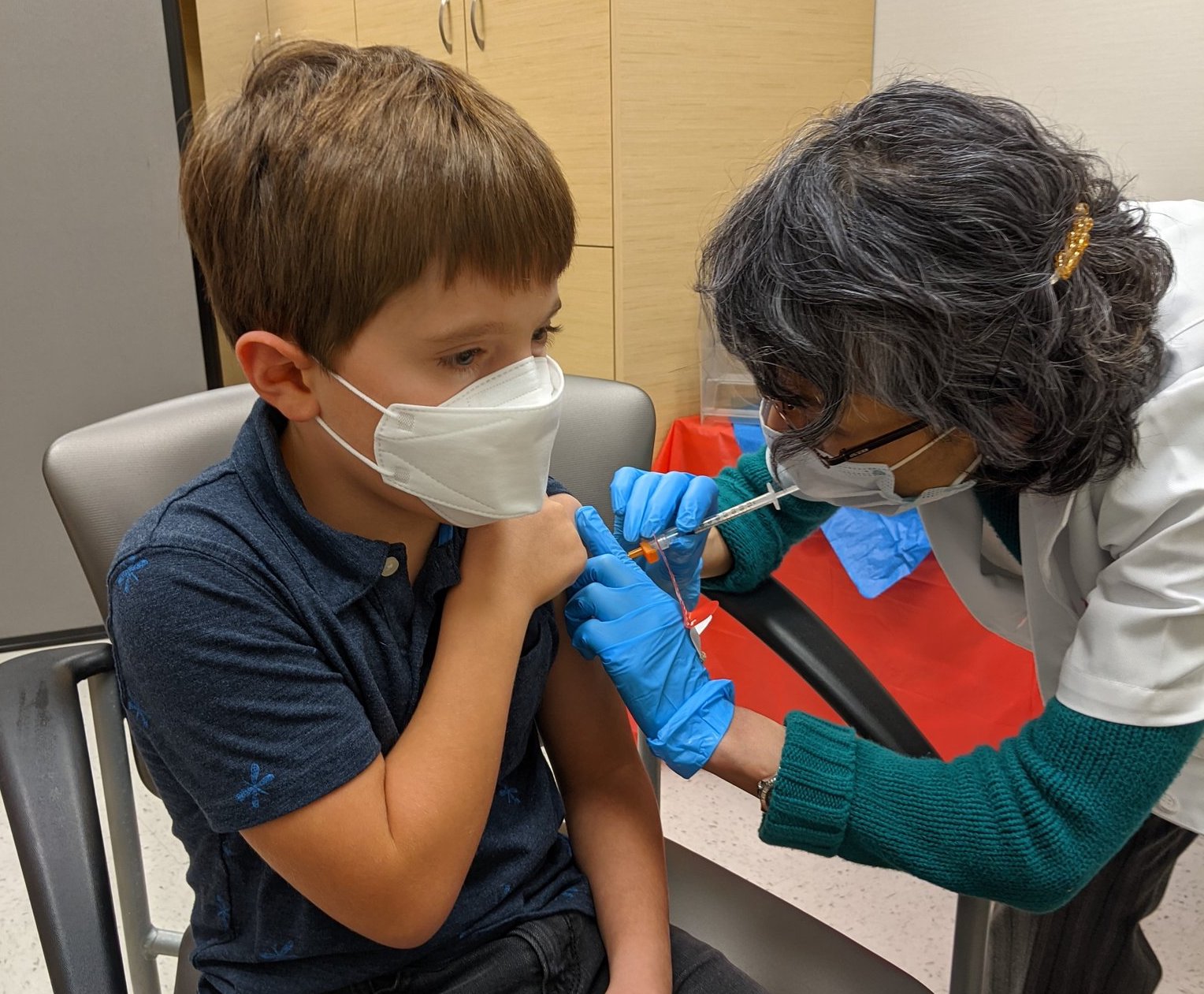 A Vancouver Island child gets a vaccination in Port Angeles on Nov. 12. Photo: Tom Jackman (Submitted)

On the morning of Nov. 12, Elise Cote’s 7-year-old son was able to come out of isolation after he was exposed to COVID-19 during an outbreak at school.

It was the third exposure at Tillicum Community School that Cote knew of, and it forced her family to once again consider what would happen if their son caught the pandemic virus.

“I can’t handle this feeling of playing roulette every day,” Cote said.

Her primary concerns are about the unknowns of the virus itself: the potential of her son becoming severely ill, and of harmful long term effects of COVID-19. If her husband got sick too, the family would miss out on income and have to use all of their savings to keep afloat.

“There isn't, I think, enough of a consideration of what a positive COVID case can mean for a young working family like ours,” she said.

So she decided to seek some protection.

At the moment, COVID-19 vaccines in Canada are only available to people aged 12 years and older, but school aged children under 12 can get vaccinated in the US as of Oct. 29. She had heard rumours that American pharmacists were vaccinating Canadian kids too. “So I [thought] the best way to verify that would be to call an American pharmacist.”

That approach has yielded different levels of success for different people and pharmacies.

Cote called the first pharmacy that popped up in her Google search—Jim’s Pharmacy in Port Angeles. The pharmacist there told her over the phone that they do not require proof of residency or citizenship. The only authentication they need before vaccinating Canadian children are a photo ID and a parent or guardian’s signature, she said.

Geoff Berner, a Vancouver father of four, said he called four pharmacies in Bellingham, WA last week to find out whether he could take his youngest—his eight-year-old daughter—to get vaccinated, making sure to emphasize that she is a Canadian citizen. According to him, three out of four said yes.

Capital Daily called three pharmacies in Washington to verify this information: while one said they're happy to vaccinate Canadians, the second was unclear about their policy, and the last said outright that they do not have vaccines available for Canadian children under 12.

When asked whether Canadian parents taking their children to Washington state to get vaccinated would face any restrictions, the state’s health department responded in an email only that they do not require people getting vaccinated to show proof of residency.

“We think the sooner we get our kid vaccinated, the better for her and for everybody,” said Berner, who now has a vaccination appointment for his daughter at a Walmart pharmacy in Bellingham next week.

Cote, on the other hand, decided against taking the ferry to Port Angeles for her son to get his shot—mainly because just a few hours after calling the pharmacy, she learned of Health Canada’s decision to complete their review of the Pfizer-BioNTech vaccine for kids aged 5 to 11 by the end of November.

Then, on Nov. 16, BC’s provincial health officer Dr. Bonnie Henry announced that they expect guidance from both Health Canada and NACI on the subject soon and the province will have enough vaccines for all kids who want it. The expectation, she said, is that school-aged kids under 12 will be able to get their shot “before the upcoming holidays” and encouraged parents and guardians to register their children now so they will be invited to get a vaccine as soon as it is approved.

So, after accounting for the cost of ferry tickets, COVID tests, insurance, and other practical challenges of travelling to a different country during the pandemic, Cote and her family decided to wait. Logistically, it didn’t seem worth it to get her son vaccinated in the states when he could do it in Canada in two more weeks.

Nevertheless she, like others in BC have expressed frustration at the level of seriousness with which the province has treated virus circulation in schools.

“As a parent, I find it extremely challenging to see this emphasis on acute illness and hospitalization, but there's no consideration for potential long-term effects,” Cote said.

At a press conference on Nov. 9, Henry reiterated her understanding that “younger people don’t get as sick with this virus… but we don’t want children to be getting sick.”

She added that public health officials are supportive of vaccine mandates for staff and workers at schools in the Interior and Northern Health regions because of higher case counts in those areas. The province has yet to issue a vaccine mandate for people working in K-12 schools anywhere in BC.

There are currently 47 Vancouver Island schools listed on the Island Health website with active COVID-19 exposure notices, 13 of which are in Greater Victoria.

The latest epidemiological modelling from the provincial ministry of health—released on Nov. 4—shows that while cases are now on the decline, they rose most steeply among school-aged children who are hitherto unvaccinated after school reopened in September. As of Nov. 1, no vaccinated children (aged 12 to 17) had been hospitalized due to the virus.

Once children under 12 are able to get vaccinated in Canada, the BC Ministry of Health said in an emailed statement to Capital Daily that they will not be required to get a BC Vaccine Card to show proof of vaccination before entering public indoor spaces—a measure that is currently required for BC residents older than 12.