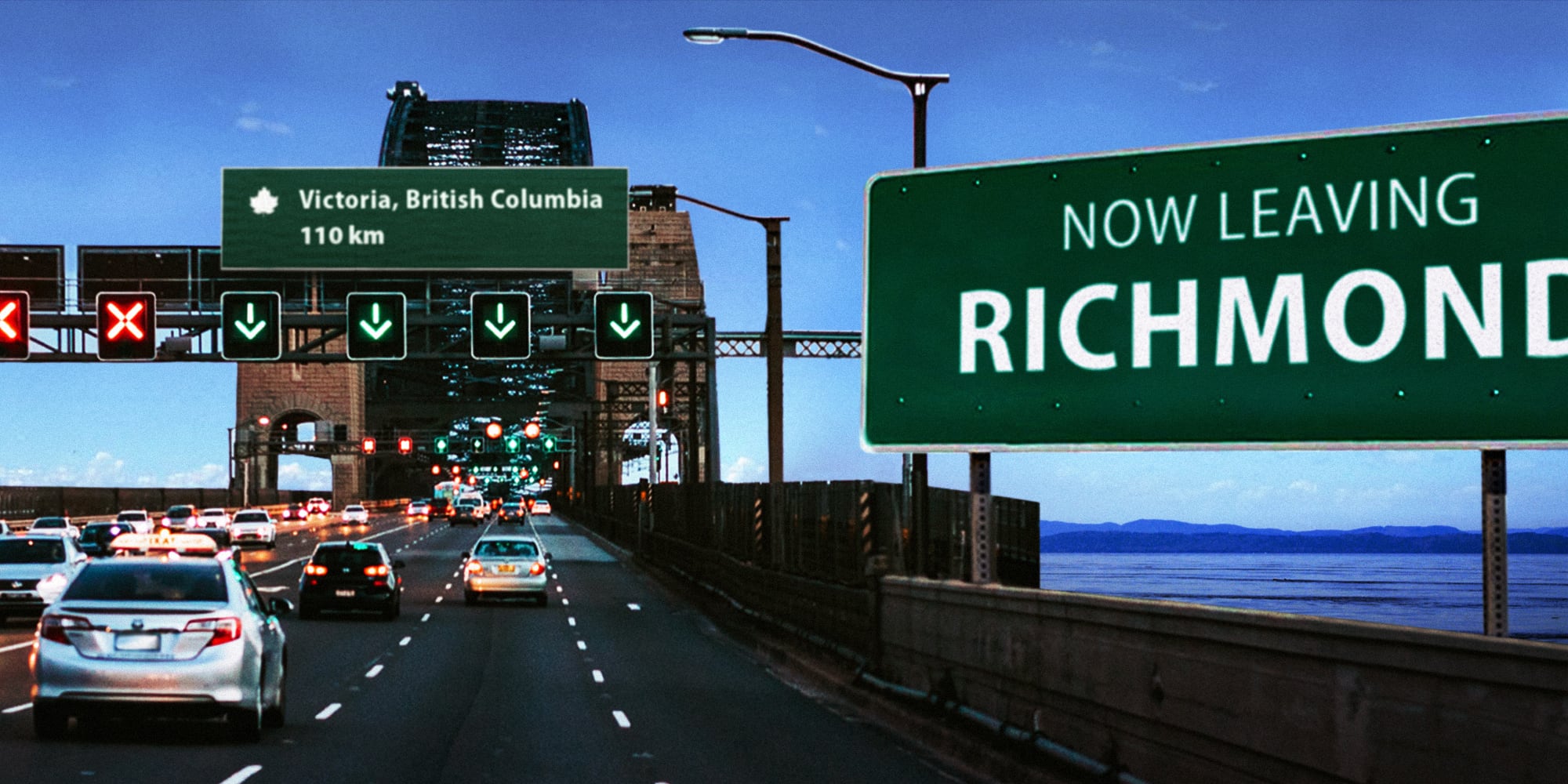 Every time there is a ferry delay, a rise in fares or just a lukewarm cup of coffee served in the Coastal Cafe, it is inevitable that Victoria-area comment sections and web forums will quickly fill up with demands for a bridge to the mainland. Discussions of a “fixed link” to Vancouver Island have been around since at least 1930, and it remains one of Victoria’s most treasured local yearnings.

However, it’s almost certainly never going to happen. There are plenty of bridges around that world that would be more than long enough to connect Vancouver Island to the Lower Mainland, but we broke down the numbers as to why getting one of them built here makes almost no sense.

The shortest possible distance across the Strait of Georgia is 19.1 kilometres. Setting out from the very tip of the Tsawwassen ferry terminal, that’s how far it takes until you hit the first rocks of Galiano Island.

From there, drivers would hop across two or three other Gulf Islands using smaller bridges until they were eventually spit out near Nanaimo or Duncan.

Setting that aside, however, constructing a bridge just over that initial section would be equivalent to building an overpass that links Brentwood Bay and Beacon Hill Park. Or, you could use your 19.1 km bridge to provide a direct corridor between Willows Beach and Goldstream Provincial Park.

It would be the longest bridge in Canada; 60% longer than the Confederation Bridge that links Prince Edward Island to the mainland, and nearly 10 times as long as the $2 billion Port Mann Bridge that opened in Metro Vancouver in 2012.

There’s also good reason to believe a bridge across the Salish Sea would be the single most expensive infrastructure project ever undertaken by Canada. The federal government just spent $4 billion to build a new 3.4 km long Samuel De Champlain Bridge to Montreal. Building a bridge across the Salish Sea would be way more complicated than simply replacing a span across the St. Lawrence River, but if you just take the Champlain bridge’s construction cost of $1.2 billion per kilometre, you’re looking at a price tag of at least $22 billion to connect Tsawwassen and Vancouver Island.

The St. Lawrence Seaway, a series of locks and canals to connect the Great Lakes to the Atlantic Ocean only cost the Canadian government the modern equivalent of about $4 billion. The aforementioned Confederation Bridge opened in 1997 for the modern equivalent of just $2 billion. An ongoing refurbishment of Ontario nuclear power plants, the single most costly megaproject in Canada right now, is coming in at just $13 billion.

So, even at a low estimate of $22 billion, this would be infrastructure spending on a whole other scale. That’s enough money to fund the Canadian Armed Forces for an entire year. Or, it could pay for 12 months of B.C. health expenditures. Or, it could cover B.C. Ferries’ $783 million operating budget for the next 28 years.

Which is not to say that it isn’t technically feasible to build a 19-kilometre bridge. Right now, the world has 36 bridges that are longer. The world’s longest bridge, China’s Danyang–Kunshan Grand Bridge, is an incredible 164.8 kilometres.

But the world’s superlong bridges all share one thing in common: While they were daunting projects to undertake, as bridges go they’re all relatively simple in design. The Danyang–Kunshan Grand Bridge, for instance, is essentially a very long highway overpass; hundreds of pillars propping up short spans of concrete roadway.

This is also how they built the Confederation Bridge to PEI. Crews raised 44 pillars from the seafloor, and then pre-cast roadway components were piled on top.

But the Salish Sea doesn’t lend itself easily to bridges. The Confederation Bridge is in shallow enough water than even its tallest pillar is just 40 meters; about the height of the Empress Hotel.

The Strait of Georgia, on the other hand, plunges as deep as 448 metres; exactly the height of New York City’s Empire State building. If engineers decided to build a Confederation Bridge-style span across the Salish Sea, it would need to be supported by a daisy chain of underwater skyscrapers.

The obvious solution would be a floating bridge. A string of floating concrete pontoons would be spooled across the Salish Sea, anchored to the sea bottom and a roadway built on top of them. The world’s longest floating bridge is actually right in our backyard; the Evergreen Point Floating Bridge near Seattle spans 2.4 km across Lake Washington.

But the first problem with a floating bridge is cost. Evergreen Point cost the equivalent of CDN$2.5 billion per kilometre, meaning a 19 km floating bridge could top out at $47.5 billion. This is roughly equivalent to the annual spending of the entire B.C. government.

And a floating bridge would also cut off Canada’s busiest marine corridor. There are 3,100 vessels pulling into the Port of Vancouver every year, and the Strait of Georgia annually sees thousands of yachts, fishing boats and warships. In a 1980 fixed link feasibility study commissioned by the provincial government, the engineering firm Willis Cunliffe Tait & Co. Ltd. suggested getting around this problem by simply building a floating bridge that was also underwater. That way, marine traffic could simply pass overhead.

The obvious problem there, however, is the risk of setting the stage for Canada’s worst-ever industrial disaster. If a ship ever clipped the tunnel or if terrorists snuck in even a mid-size explosive charge, the result would be hundreds of commuters condemned to drown in the Pacific Ocean. Washington State may remain an enthusiastic builder of floating bridges, but it has come at the cost of two sunken bridges. And both of those bridges were on a lake, meaning they were only exposed to a fraction of the high seas that regularly strike the Strait of Georgia.

There’s also a web of political problems that would accompany any serious discussion of a bridge to Victoria.

For one thing, Gulf Islanders absolutely hate the idea. Any viable bridge design would require at least one Gulf Island to be completely bisected by a freeway. Some designs would cut Salt Spring Island right down the middle, while others envision running highways along the entire lengths of Gabriola and Valdes Islands.

Gulf Island groups such as the Bridge-Free-Salish-Sea collective have already been pre-emptively signing petitions opposing any future bridge construction in the region. And if the ongoing saga of the Trans Mountain pipeline expansion has taught us anything, it’s that dedicated opponents of a major infrastructure project can do an awful lot to delay it. And a bridge to Vancouver would just happen to pass over the homes of some of the most militantly protest-inclined people in Western Canada.

Bridge planners would also need to address the delicate issue of having half of the bridge’s span located on U.S. territory. The shortest possible bridge route, which would roughly follow the first stage of a ferry journey from Tsawwassen to Swartz Bay, would pass through nine kilometres of U.S. waters. While the Americans don’t seem to have qualms about us running boats through those waters, their attitude would likely change if we’re talking about an enormous permanent barrier to marine navigation.

We could run the bridge somewhere else, of course, but building an all-Canadian route adds at least 10 km to the length of the initial span, not including all the extra bridges needed to hop across the Gulf Islands.

Serious talk of a bridge crops up roughly once a generation, usually when B.C. Ferries are coping with some major fiasco. A “fixed link” was debated in the B.C. Legislature in the 1970s, soon after ferry fares were controversially doubled overnight. In the wake of the Fast Ferries scandal, one of the first major proposals of the new B.C. Liberal government of Gordon Campbell was to raise the idea again. "The long-term viability of the ferries is being called into question and we have to do something," then-transportation minister Judith Reid said in 2001.

What ultimately shoots down any talk of bridge construction, however, is the relatively tiny population of Southern Vancouver Island.

Like Vancouver Island’s fixed link, the tunnel bored under the English Channel had similarly ignited imaginations for decades until it was finally completed in 1994 for a cost roughly approximating the modern-day equivalent of CDN $30-40 billion. But the Channel Tunnel connects two countries with a cumulative 130 million people and a combined annual trade equivalent to CDN$140 billion. It’s similarly no accident that six of the world’s 10 largest bridges are located in China. When linking together cities with populations of 20 to 30 million people apiece, it magically becomes much easier to greenlight awesome engineering projects.

In the case of a Salish Sea Bridge, however, Canada would be shouldering one of the largest engineering challenges in its history just to make life a bit more convenient for 500,000 or so people.

In 2018, the entire B.C. Ferries fleet carried only 8.7 million vehicles. This is enough to make it one of the busiest car ferry systems on the planet, but in that same period, the aforementioned Samuel De Champlain Bridge in Montreal carried 60 million cars.

It’s partially due to this lack of traffic that even the most optimistic provincial government forecasts estimate that to make a Salish Sea bridge financially viable, it would have to charge tolls in excess of $180 one way. If construction costs got out of hand, meanwhile, that toll could reach $800.

Sparse demand has similarly killed other, much smaller Salish Sea bridge proposals. In 2015, a proposal to build a bridge linking together the Sunshine Coast fell through after provincial planners determined they would end up building a $4 billion bridge that could only reliably be expected to rake in a piddling $25 million to $80 million in tolls per year.

A 2016 study into a bridge to Gabriola Island similarly fell through when provincial planners determined they would be building a $500 million bridge to serve 4,000 people (roughly $125,000 worth of bridge per person).

So, if Vancouver Island ever really wants a fixed link, one of two things will have to happen. Either bridge technology will have to advance so precipitously that spanning 19 km of deep, rough open ocean no longer becomes the unprecedented engineering feat that it is now.

Or, Vancouver Island will effectively have to become Hong Kong. It would need to swell in size and influence until it’s one of the most powerful and consequential corners of the country, and able to commission Herculean infrastructure projects with the reasonable expectation that they will be worthwhile.

Until that time, we’re all going to be riding ferries.