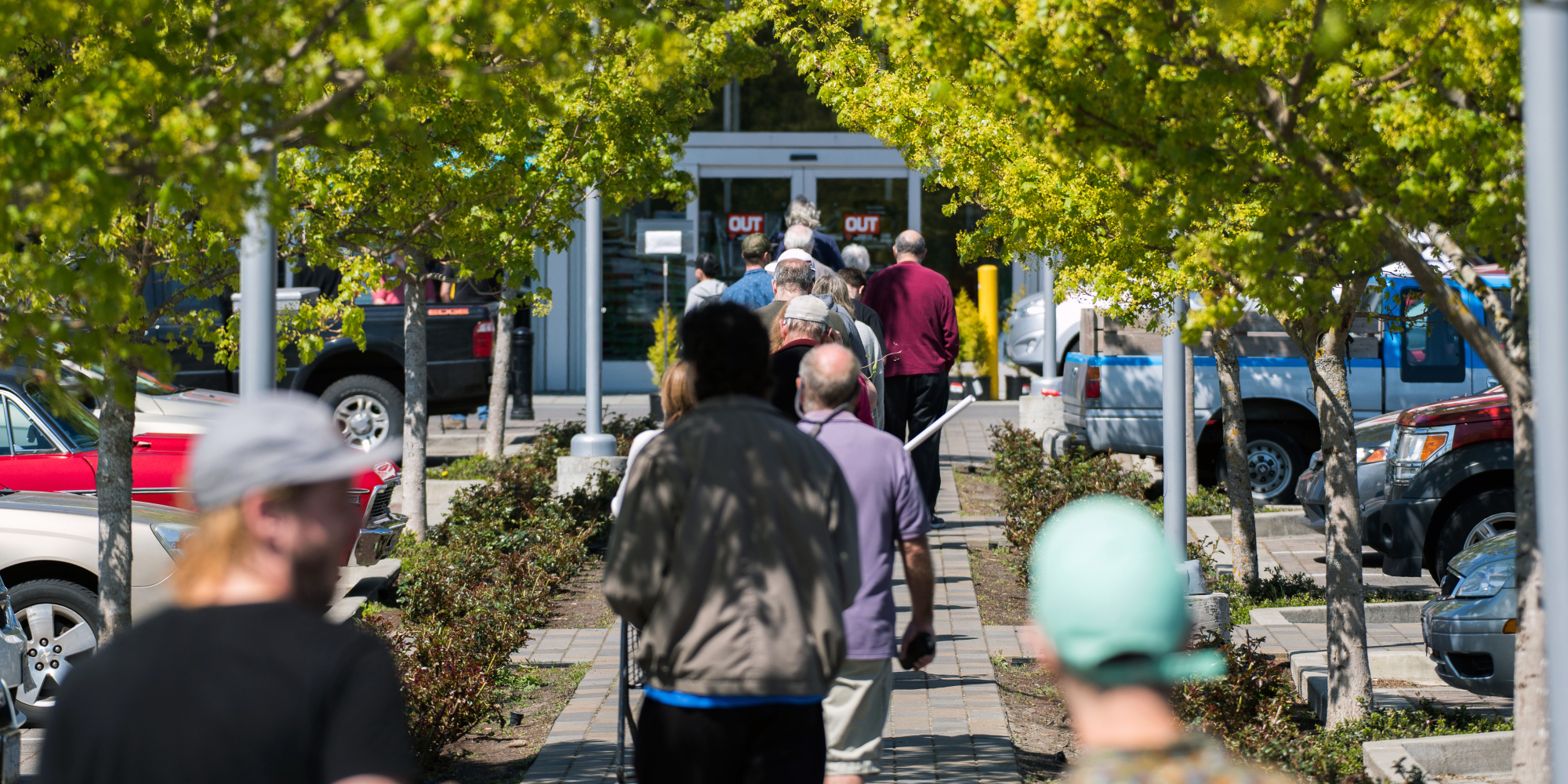 Everything comes with unintended consequences, and that’s particularly true of the response to COVID-19. The unprecedented economic shutdowns, travel restrictions and social distancing measures of this pandemic have played a key part in arresting the spread of the virus. However, they have come at the cost of trillions of dollars in economic damage as well as the exacerbation of any number of other global health problems, from child malnutrition to heart disease. Below, we asked Harley Gordon, our resident science writer (and a UVic scientist at the front lines of COVID-19 research) to examine the “hidden casualties” of COVID-19.

Around the world, death rates are spiking well above the numbers killed by COVID-19

“Excess deaths” is a term used when there is an above average number of deaths over a given time period. We see excess deaths during natural disasters, wars, and, of course, pandemics. Excess deaths provide insight into the true toll of the disasters, especially in countries where COVID-19 testing is not widespread. Mexico City, for example, counts 9,472 COVID-19 fatalities, however there have been 22,800 excess deaths.

In the US, every month since March has brought an excess of deaths due to COVID-19. According to a recent report from Statistics Canada, BC experienced 336 “excess” deaths during a six-week period in from mid-march to the end of April, although most of them are not deaths directly caused COVID-19.  By May 1st, 112people had died of COVID-19 in BC. Quebec, on the other hand experienced 2,636 excess deaths over the same period, but it had only 2,132 deaths directly to COVID-19, so 504 more excess deaths than those individuals killed by COVID-19. Based on these numbers, the indirect effects of COVID-19 are still deadly.

People avoided the hospital due to COVID-19, which raised heart disease and cancer deaths

For many, when the pandemic began, the thought of going to a hospital was so anxiety inducing that emergency room visits dropped by half. Concerned that fear of COVID-19 would keep people from seeking help for urgent medical matters, Provincial Health Officer Bonnie Henry, during a daily briefing in April, made a point of telling British Columbians that it was in fact safe to go to the emergency room. Island Health even issued a press release to reassure people that hospitals had “strict infection prevention and control protocols in place.”  As a result of the reduction in doctor visits and the reprioritization of medical care during the pandemic, an increase in cancer deaths is expected over the next couple years. Patients have been receiving chemotherapy less often, non-emergency surgeries have been delayed, and visits to the doctor have been skipped. All of this can lead to more cancers going undetected.

When the hospitals were preparing for the pandemic, they prepared for the worst situation possible: overburdened hospitals forced to make decisions about which lives to save. The decision to lock down averted that outcome. But it came at a cost: lives will be lost because of it. In fact, lockdowns are putting some nations at a higher risk of a new pandemic: The World Health Organization reports that more than 117 million children are at risk of missing their measles vaccine due to COVID-19.

Overdose fatalities have never been worse

Fatal overdoses in the province peaked in 2018 with 1,547 deaths. In 2019, deaths were trending downward: nearly 600 fewer people died. But, as The Capital previously reported, the pandemic has exacerbated the opioid crisis.

Between January and March we saw fewer deaths than we did during the same time period last year. But with the lockdowns in full effect in April, that trend rapidly reversed.

By this time in 2019, there were 618 drug-related deaths in the province; already this year we have seen a 32 % increase in fatal overdoses — 909 people have died. That’s four times as many people who have died of drug overdoses than COVID-19.

Opioids, specifically fentanyl, were involved in around 85% of overdose deaths last year. Risk factors for opiate addiction include unemployment, poverty, depression, anxiety, and stress, so the pandemic response, which exacerbates the risk factors and also makes it harder for people to find access to a safe-drug supply, could be fueling the ongoing opioid crisis.

Lockdowns have not been good for mental health

Unemployment, especially coupled with lack of social contact and support, is terrible for everyone's mental health. The Canadian Mental Health Association’s latest survey, published at the end of June, shows alarming trends. First and foremost, the percentage of people who reported having suicidal thoughts has doubled since last year. This points to a situation that is likely to get worse before it gets better. Scientists from the University of Toronto who compared suicide rates from 2000 to 2018 relative to unemployment rates found that a 1% rise in unemployment usually corresponds to a 1% increase in suicides. These same researchers predict between 418 and 2,114 additional suicides in Canada as a direct result of pandemic-related unemployment.

The lockdowns have been hardest on those already struggling with mental health, including the 2.3 million Canadians who reported having unmet mental health needs even before the pandemic. Individuals already struggling with their mental health were five times as likely to feel depressed and four times as likely to have suicidal thoughts. It’s too early for concrete data, but experts are worried. Suicide rates historically spike around a year after an economic recession, but some regions are already seeing an increase in suicides. In Yakima County, Washington, the county coroner reported a 30% increase in suicides between April and May.

COVID-19 has been hard on relationships. Divorce lawyers across the country are working overtime. Canada won’t update divorce statistics until the next census, but family-law firms are reporting an increase in inquiries and business related to divorces.

Parents' relationships with their children are also under strain. According to the Canadian Mental Health Association, 23% of parents report having more conflicts with children, 17% report yelling at them and disciplining them more often, and 11% report using harsh words with them more often.

We’re not yet nine months into the pandemic, but experts foresee a dramatic baby bust come fall. Global pandemics and economic recessions haven’t been known to inspire couples to bring children into this world. During the Spanish Flu pandemic, the US experienced a 13% drop in the birth rate, and for two years following the economic crisis of 2008, there was a downturn in births in Europe and the US. It would be reasonable to expect a decline this time as well.

Everyone knew locking down was going to be hard, but did we expect it to increase divorces and strife between children and their parents and reduce the birth rate? These have far-reaching social implications.

Domestic violence is on the rise around the world

COVID-19 has frayed relationships, but it also makes it harder for abused individuals to get out of one. From April to May, the Vancouver-based Battered Women's Support Services reported a 400% increase in calls.

Domestic violence is a global concern: in France reports of domestic abuse have increased by 30% since March. Argentina has seen a 25% increase in domestic violence cases, and help lines in Singapore have reported a 33% increase in calls. Minister for Women and Gender Equality Maryam Monsef said that gender-based violence in Canada has gone up by 20 to 30% as a result of COVID-19 restrictions.

Almost all of us are more broke

In a survey of nearly 400,000 British Columbians, a third reported increased difficulty with meeting their financial needs. When the data is broken down by race, it becomes apparent that visible minorities across the province are disproportionately affected by the pandemic, as is the case with most crises.

Those with annual incomes under $60,000 are having a tougher time than higher earners. They’re more likely to have lost their jobs and experienced food insecurity. The median income in BC in 2018 was $36,700. This means that when the province acknowledges  the economic toll of the pandemic on individuals whose annual income is less than $60,000,  it’s referring to the vast majority of us.

It's a disaster out there for young people seeking work

Finding a job is difficult in the best of times. Rejection is common and the competition is fierce. In April, the time many new graduates are ready to begin their careers, 50% of surveyed Canadian companies were in a hiring freeze (The Capital, meanwhile, is actually hiring). With so many organizations undergoing a hiring freeze, freshly minted graduates and students looking for summer work to gain skills and experience in their prospective fields are in difficult circumstances. Without any employment history, those who finished school in April were unable to apply for the CERB benefits. They were instead entitled to a reduced student benefit, but that $1,250 a month doesn’t go far in a city like Victoria, where the average rent for a one-bedroom apartment is $1,390.

COVID-19 relies on human interactions, so by minimizing contact with others, we give the virus fewer opportunities to spread. Lockdowns save lives. They’re why BC was able to flatten the curve. But the curve is rising again, and public health officials are again faced with the prospect of increasing restrictions.

Many of the problems associated with lockdowns are a direct result of the increase in unemployment. As the province looks toward the future, a return to widespread economic shutdown is unlikely. Businesses that have reopened have had to create a COVID-19 safety plan for protecting employees and customers. In the event of future outbreaks, the province may be able to safely implement localized closures rather than province-wide orders, which have devastating effects on the lives of British Columbians.