The Nuxalk Nation's COVID-19 checkpoint along Highway 20. Without provincial recognition of regional states of emergency, quarantine efforts such as these must depend solely on the goodwill of motorists (Photos courtesy of Caitlin Thompson)

Capital Daily is part of the Trust Project
latestCOVID
TransportationBusiness
HousingGood News
The Nuxalk Nation's COVID-19 checkpoint along Highway 20. Without provincial recognition of regional states of emergency, quarantine efforts such as these must depend solely on the goodwill of motorists (Photos courtesy of Caitlin Thompson)

Four Victoria lakes you can bike to this weekend
COVID-19

April 25, 2020
Get the news and events in Victoria, in your inbox every morning.
Thank you! Your submission has been received!
Oops! Something went wrong while submitting the form. 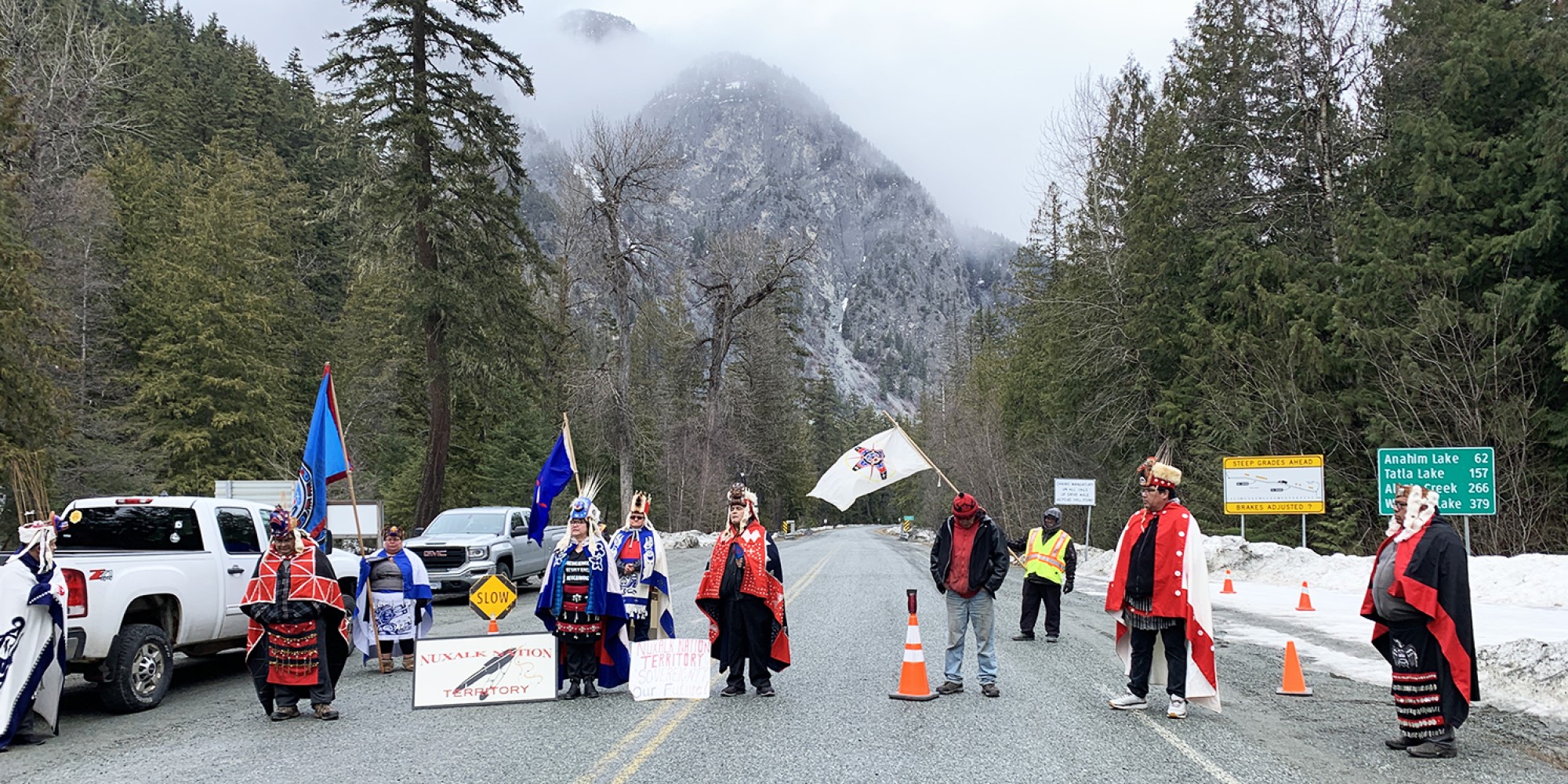 The Nuxalk Nation's COVID-19 checkpoint along Highway 20. Without provincial recognition of regional states of emergency, quarantine efforts such as these must depend solely on the goodwill of motorists (Photos courtesy of Caitlin Thompson)

At the Heckman Pass Summit, about an hour’s drive from the remote coastal village of Bella Coola, you’ll see signs discouraging non-residents from entering the valley. They say “NUXALK NATION TERRITORY IS NOT A PLACE OF REFUGE” and warn that the local health care system “CANNOT ACCOMMODATE AN INFLUX OF PEOPLE.” Keep driving, and you’ll encounter a checkpoint at the base of the hill that’s manned round-the-clock by three-person crews. If you’re carrying essential goods, you’re waved through. If you’re a returning resident, you’re sent to a motel to self-isolate for 14 days. If you’re neither, you’re asked to turn around.

The checkpoint is among the  extraordinary measures that First Nations across BC are taking to shield their people from COVID-19. But with the province ignoring calls for local travel bans that would bolster their efforts, even as remote First Nations see their first fatalities from the pandemic,  some small coastal communities fear they won’t be able to hold off the tide for long.

The Nuxalk Nation declared a local state of emergency on March 21. As part of this, it quickly shut down non-essential travel to and from its territory. Many Nuxalk people have health issues, such as respiratory problems, cancer, and diabetes, that put them at high-risk for severe complications of COVID-19. The local hospital has only two ventilators (one is for a child) and no intensive care beds. “Every reserve is two to three families living per house,” says Wally Webber, Nuxalk hereditary chief and chief councillor. “It's overcrowded. If COVID-19 gets here, we're in trouble.”

The Nuxalk Nation also had its Elders in mind when implementing its state of emergency. “There are only three fluent [Nuxalk] speaking Elders left, and we're going to do everything we can to protect them,” says Webber.

Many other Indigenous coastal and island communities, also responded quickly to the threat of the pandemic by enacting protective measures, such as checkpoints, curfews, travel restrictions, and lockdowns. By the second week of April, 44 First Nations in BC had declared local states of emergency in an effort to seal off their territories, motivated in part by the memory of the devastating toll that previous infectious disease outbreaks had taken on their communities.  In 1919, the Spanish Flu killed BC First Nations at a rate eight times higher than the non-Indigenous population. A generation before, smallpox chewed through coastal villages with such ferocity that many lie abandoned to this day.

But without the First Nations’ travel restrictions carrying any provincial backing, non-Indigenous people are running the blockades and violating the orders. It’s why, without provincial support, these nations fear they’ll be unable to keep the coronavirus at bay.

In the first couple of weeks that the Nuxalk checkpoint was in place, four drivers refused to stop, rolling over traffic cones and pushing through sawhorse barricades. A handful of others stopped but shrugged off the crews’ pleas to turn around.

“Sadly, there are a lot of people who don’t respect First Nations’ authority,” said Daniel Bertrand, a Central Coast Regional District director. CCRD’s geographical boundaries span 22,000 kilometers and overlap with four First Nations’ territories, including that of the Nuxalk Nation.

After all four of the First Nations in its region (Nuxalk, Wuikinuxv, Heiltsuk, Kitasoo/Xa'xais) declared states of emergency, the CCRD followed with its own, hoping to support and expand their efforts. Municipal state of emergency funds are reimbursed by the province and would enable the CCRD to contribute manpower to the First Nations’ efforts, as well as provide them financial and administrative assistance. “But the province thwarted us,” said Bertrand.

In addition to expense reimbursement, CCRD, in a letter dated March 25, asked provincial government officials for help “broadcasting our travel advisory” at BC Ferries terminals and on Highway 20. It also asked the province to direct RCMP detachments to enforce the community’s travel restrictions “in the same way that wildfire evacuations are enforced during local states of emergency.”

Webber agrees. “We thought that wasn’t a very good move,” he said. “If they let the local regional district have their state of emergency, that gives them the power to ask the RCMP to come to help us at the checkpoint. And what we need is the enforcement.”

According to the province’s Joint Information Centre, the public safety minister’s order is intended to ensure that the provincial and local governments are providing a coordinated response to the crisis, “allowing us to move forward in lock step with local governments under a single action plan.”

There appears to be one exception to this rule, however: Your remote community has to first get COVID-19. After a pandemic cluster appeared last week in Alert Bay, on Cormorant Island, a Joint Information Centre spokesperson acknowledged that “in some specific cases a more local, community driven response is required.”  The province has now authorized a local state of emergency for Alert Bay—whose mayor, Dennis Buchanan, was among those who contracted the virus. On Friday, an island resident and member of the 'Namgis First Nation died of the disease.

Buchanan said Alert Bay, which has imposed a curfew on its residents and banned non-essential travel, has been receiving “fantastic” support from the province. “They are supplying logistical help with transportation, supplies of masks, sanitizer and PPE,” he told The Capital in an email. “They are also helping to ensure that we have an adequate supply of food and other essentials. They have supplied Conservation Officers to monitor the people travelling to and from Cormorant Island. “

The province’s many coastal communities simply want to be treated like Alert Bay, and have been asking for such for more than a month. The  Joint Information Centre spokesperson wouldn’t discuss whether the province has reconsidered its suspension of local states of emergency in light of the virus reaching Cormorant Island, saying via email only that the decision to support the state of emergency declaration on Cormorant Island came “on the direct recommendation of local public health officials in response to specific concerns about community transmission on the island” and that outbreaks “are generally driven by people not self-isolating when sick and not practicing physical distancing and proper hygiene.”

But some in the North and Central Coast region see Alert Bay as a cautionary tale—that if provincial help arrives only after the virus does, it will be too late. “They should be proactive, not reactive,” said Webber.

The Joint Information Centre spokesperson said that the province has supported  communities “across all regions.” But the Nuxalk Nation and CCRD say that the unique concerns of their region have been overlooked.

Earlier this month, they joined all the  other municipalities, regional districts, and First Nations on Haida Gwaii and the North and Central Coasts in sending an urgent, unified plea to provincial government officials. In a letter dated April 6, these communities wrote that the province, Canada, and the RCMP had a “moral and social responsibility to support and enforce non-essential travel restrictions and authorize municipalities and regional districts to do the same.”

The 18 signatories expressed concern that they were running out of time to protect their communities: “We cannot afford to wait and see what will come with the non-essential travelers currently entering our Region in order to escape urban lockdowns or seek the freedom of the country. We know that requests for people to voluntarily stay away will fall on the deaf ears of those who do not respect Indigenous rights and title, and those who feel the need to flee for their lives to areas of the Province that currently have no confirmed cases of COVID-19.” They asked for help before the pandemic “unnecessarily” gained a foothold in their region, concluding, “This cannot wait.”

Nineteen days later, they are still waiting for the province’s response.

But that may soon change. Late spring and summer typically bring thousands of tourists to the region for sports fishing, hunting, and wildlife exploration, says Tallio. And BC just added hunting and fishing to its list of essential services.