A nighttime view of the former Paul's Motor Inn, which was purchased by BC Housing in June to serve as a homeless shelter.
Homelessness 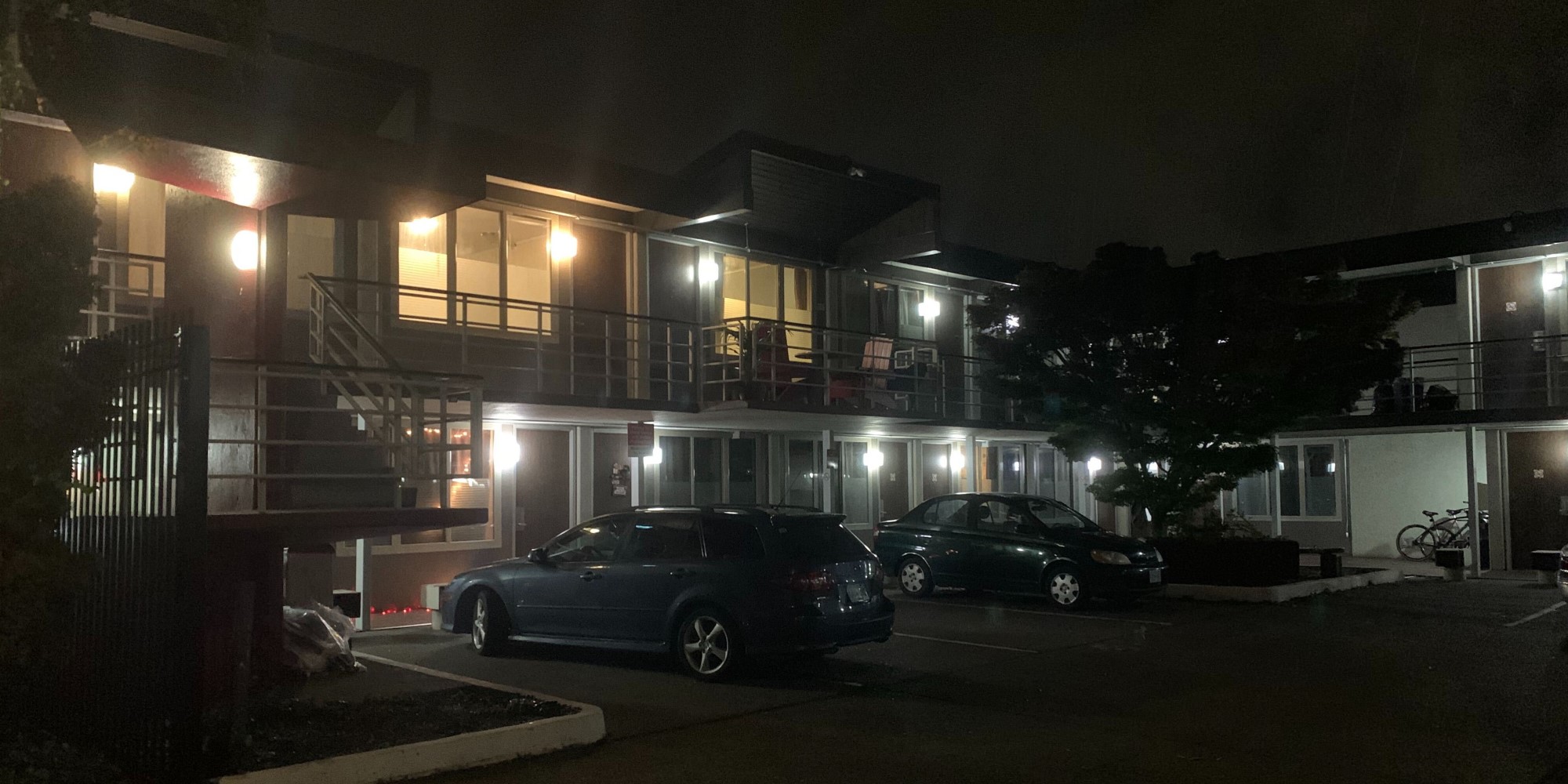 A nighttime view of the former Paul's Motor Inn, which was purchased by BC Housing in June to serve as a homeless shelter.

Since the nearby Comfort Inn became a temporary hotel for the homeless, cafe owner Jolanda Machholz now makes sure to arrive an extra half-hour early to work. She first scans the sidewalk for human feces, syringes, and bike parts. Then she circles her patio looking for people sleeping and shooting up. Then, she checks the outdoor drains, which have had their covers stolen four times, assumedly for scrap metal. Finally — and tentatively — she tugs on the lock on the front door; it was smashed in a month ago.

Machholz purchased Java Jo’s in March 2019, and if the vintage-styled cafe continues to be vandalised and burglarized she contends this may be her first, and last year in business: “I’m a single mother of three. I’ve put my life on the line for the cafe.”

Since the onset of pandemic lockdowns, the City of Victoria and the Province of BC have pursued an ambitious multi-million dollar strategy to pair the homeless with impromptu housing in order to prevent the spread of COVID-19. While Capital Daily has covered the mixed results for the people housed, what’s clear is that the strategy has been disastrous for surrounding small businesses. Even among the most compassionate supporters of providing dignified services to Victoria homeless, there are growing fears that their neighbourhoods are entering a spiral of decline from which they may never return.

Over the past decade, the team at Dodd’s Furniture have turned out to serve Thanksgiving lunch at Our Place Society. Which is why proprietor Gordy Dodd was particularly hurt when a resident of the Tally Ho (which was recently repurposed as a shelter) ransacked his warehouse and then gave him the finger while jeering “we did it and there’s nothing you can do about it,” Dodd told Capital Daily. The vandals did $10,000 in damage and stole items that were of little use to anyone else, such as WiFi nodes that enable delivery drivers to connect with the warehouse. “They arrested someone; they followed him back to the Tally Ho,” said Dodd. To date, Dodd estimates they have lost a further $5,000 in loss of sales, litter clean-up, and general vandalism.

“The main problem is that they [BC Housing] did not ask anyone before they bought these hotels … we read it in the newspaper,” said Dodd, whose store is a 300 metre walk to the Comfort Inn. Dodd says he works closely with Our Place Society, which he says has been sympathetic to their security problems. Rather, he reserves his ire for the provincial government: “Don’t throw $19 million at the problem and say—here you go.”

BC Housing’s hotel-shelter initiative has definitely been noticed by Victoria's first responders, with police regularly performing drug and weapons busts at the sites, or dealing with violent stand-offs. The most recent spate of incidents include a 12-hour-period over November 5 and 6 where Victoria Police attended to three calls made in the hotels, all serious in nature. The first was the fire at Capital City Center Hotel for a fire that resulted in an estimated $250,000 in damage, and left 87 guests displaced. Our Place Society who runs this site, told CTV the fire was set by a guest, not a hotel resident. Victoria Police then attended to two more calls—both resulting in standoffs at the Howard-Johnson.

“We've had three major thefts on our property and our customers are being harassed. Cars are being checked for valuables. People lose sleep. It’s escalated to the point of fear,” said one hotel manager whose business is in the neighbourhood of the Travelodge, a hotel-turned-shelter. The manager spoke to Capital Daily on the condition of anonymity out of concern for public backlash.

“I have empathy and understand why people are homeless, and that’s why this is so hard. There’s very little long-term planning for them. They [BC Housing] are creating environments that won’t support long-term solutions.”

One of the businesses affected the worst by the hotel-turned shelter initiative has been Foi Epi, who previously leased the restaurant portion of Paul’s Motor Inn and spent $150,000 on renovations. When the province purchased the Inn this sudden change of plan forced owner Clif Leir to abandon the project—and the money he’d already invested. Leir said 20 people have lost their jobs within his company, and if the province does not address this issue, his other locations may fold, resulting in another 35 jobs lost.

All About Hue Hair Design also spoke to the media about how they lost business because of their proximity to a shelter-hotel, The Comfort Inn. Owner Lindsay Price told Global News that BC Housing set up a table near the entrance to her salon offering condoms and needles. Most of her customers cancelled their appointments upon learning about the acquisition, said Price.

While some hotel-shelters have been slated for closure, Victoria Mayor Lisa Helps recently announced a plan to move 200 people into indoor shelters in order to end all-day camping by the end of 2020. It is not known how these people will be selected or if they will be residents from the hotels. At last count, there are roughly 500 formerly homeless people in hotels and another 275 on the street.