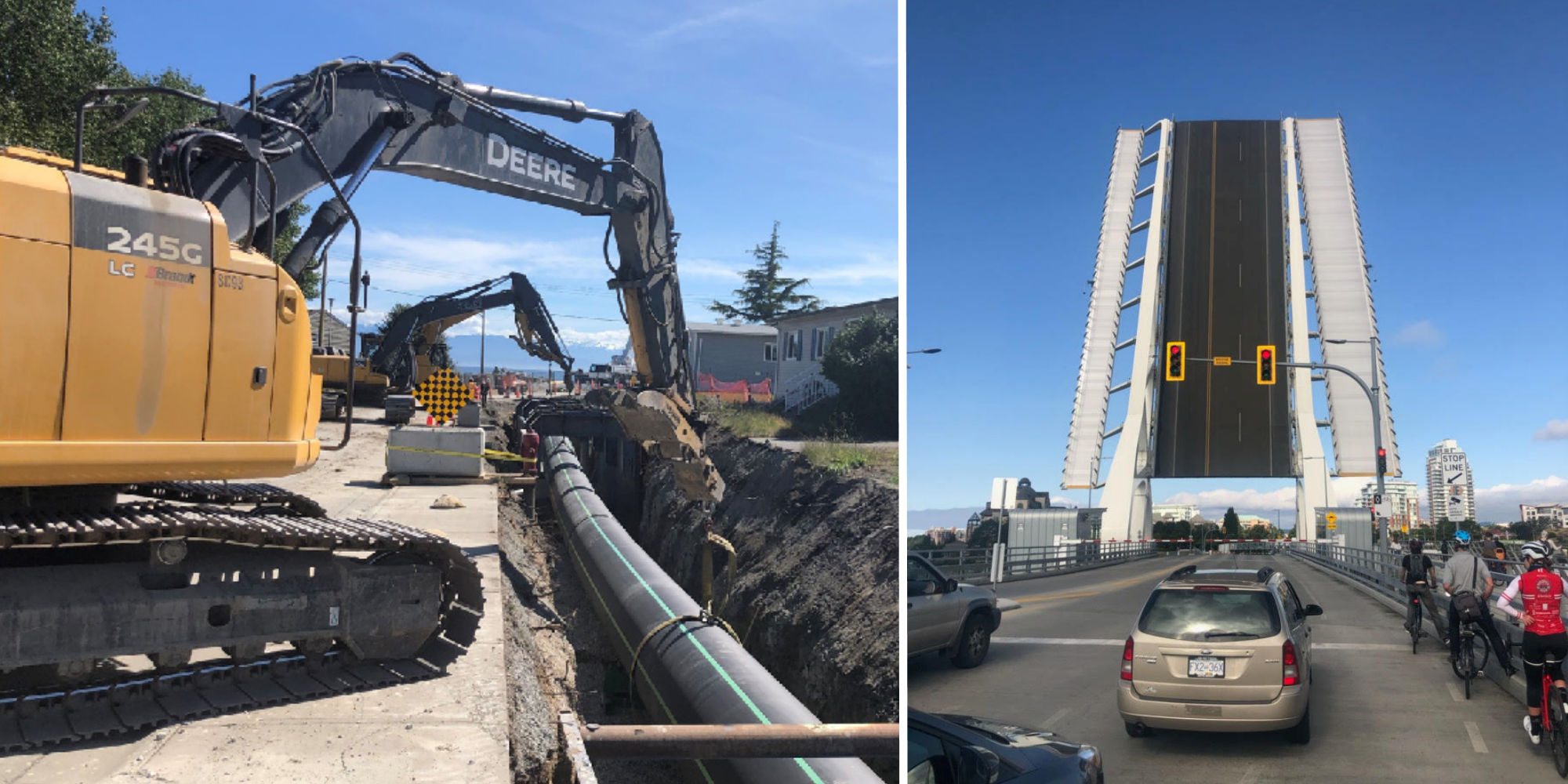 Left, installation of the Macaulay Forcemain, a component of the $775 million Wastewater Treatment Project. Right, the Johnson Street Bridge in its fully raised position (CRD/Ann Catherine).

‍While public controversy has died down over the Johnson Street Bridge and the Wastewater Treatment Project, this does not mean that Victoria residents are done paying for them. Both projects were funded in large part through debt, meaning that in addition to the projects’ sticker prices ($775 million for Wastewater Treatment and $105 million for the Johnson Street Bridge) municipal authorities will be needing to lay out millions of dollars in interest charges until at least the year 2040. Debt-financing is a critical tool for any government, but The Capital broke down the overlooked costs of what are already two of the most expensive things Victoria has ever built.

This year alone, debt-servicing costs related to the Johnson Street Bridge will be $1.4 million, according to numbers provided to The Capital by the City of Victoria’s finance department. All told, the City of Victoria borrowed $48.5 million to build the bridge. By the time bridge-related debt is paid off in the mid-2030s, the City of Victoria can expect to have paid slightly more than $20 million in interest charges.

For context, this is almost exactly what it would have cost to repair the previous Johnson Street Bridge. In 2009, when replacement was first pitched to Victoria City Council, a replacement was pegged at only $40 million, a far cry from the $105 million it would ultimately incur.

The annual cost of servicing the bridge debt is roughly equivalent to the cost of hiring 30 new police officers or paying for Mayor Lisa Help’s salary 14 times over. It’s also roughly the same as all the money brought in each year by user fees at City of Victoria recreation centres ($1.9 million). However, $1.4 million is still a fraction of the city’s annual operating budget of $258.7 million.

All City of Victoria debt payments, including principal, constitute just 3% of the city’s annual operating budget. This makes debt the ninth most expensive line item in Victoria’s 2019 budget, putting it slightly ahead of the annual resources the City of Victoria spends on the public library or solid waste collection.

The total municipally paid debt costs for the Wastewater Treatment Project are set to be a bit higher, coming in at a cumulative $28 million, according to figures provided by the CRD.

Most of the project’s $775 million cost is being funded through $459 million provided by the B.C. and federal governments. However, even after cash was called in from participating municipalities that still left a $114 million chunk to be paid through debt.

The last of this debt is not scheduled to be paid off until 2040; roughly 20 years after the project’s anticipated December, 2020 opening date.

Municipalities borrow money a bit differently than the average holder of a mortgage or car loan. Money for both projects was borrowed through the Municipal Finance Authority of B.C., an independent agency that coordinates all of the province’s municipal debt. By grouping all municipal loans in one place, the authority is able to negotiate better terms and interest rates than if cities and town were issuing debt on their own. The agency also structures long term debt so that municipalities are paying the same interest rate each year, as well as the same paydown of the principal.

Greater Victoria also did this borrowing at a particularly optimum time, given low interest rates. One of the major chunks of debt for the Johnson Street Bridge, for instance, was taken out in late 2014, when interest rates on long term borrowing stood at 3%. Compare this to just four years prior, when the same debt would have incurred interest of 4.5%.