May 14, 2021
Get the news and events in Victoria, in your inbox every morning.
Thank you! Your submission has been received!
Oops! Something went wrong while submitting the form. 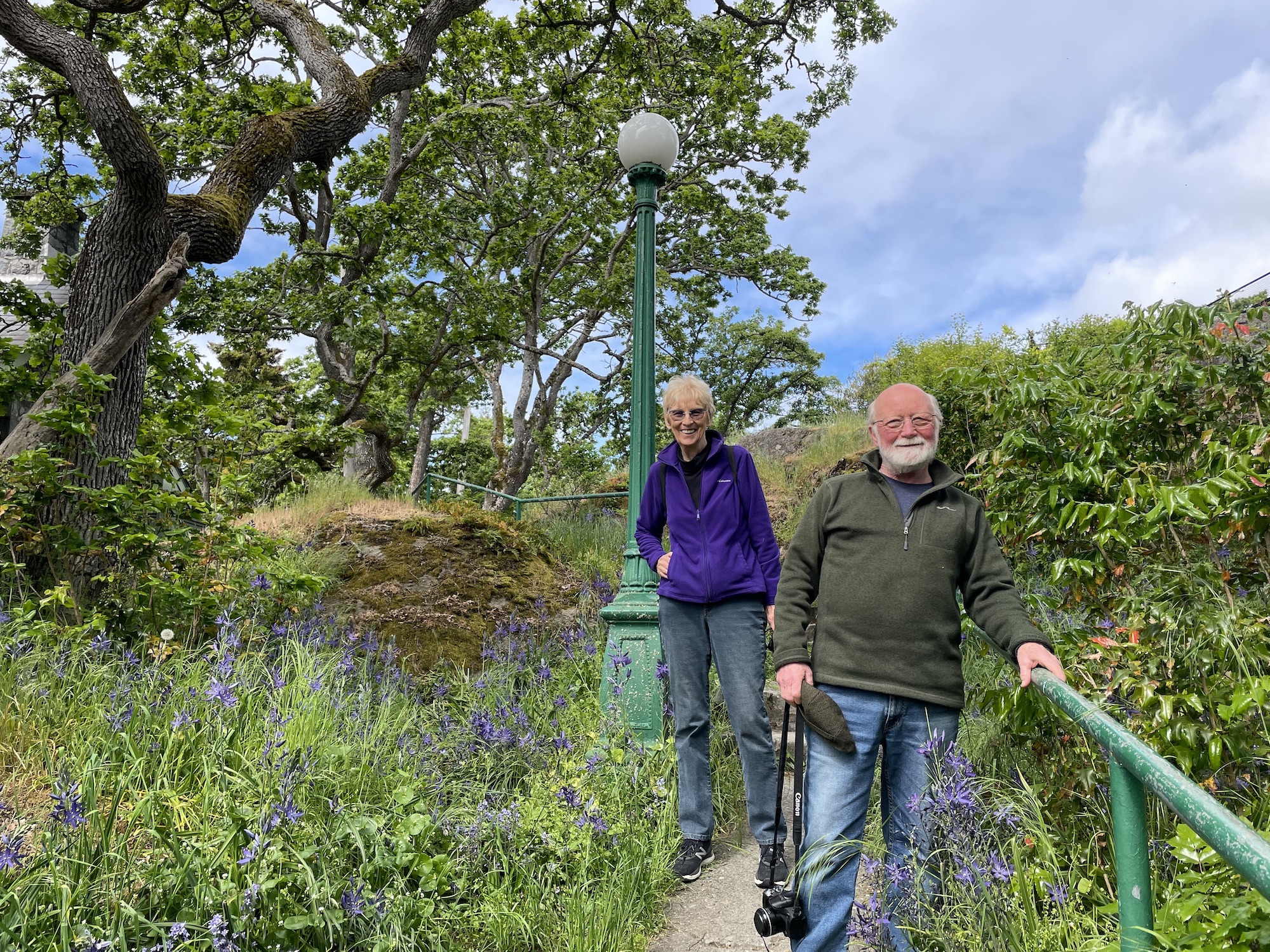 Every Sunday morning, rain or shine, residents of Oak Bay all know where to find Carol Davies. It’s a place the retired teacher and horticulturalist has spent much of the past 15 years, tucked between the houses two blocks from bustling Oak Bay Avenue—the Brighton Walkway.

Nestled between the blooming camas, curling Garry Oaks, and the tall, mossy rocks that dominate the terrain of the path, Davies wastes no time getting to work. She can identify the many species of native plants she and the other members of the Friends of Brighton Walkway have helped to thrive, along with the many dogs (for whom she carries treats) and their owners that pass her on the path. Often, passersby recognize her too, and thank her for her work.

Davies and the Friends of Brighton Walkway have made it their mission to bring back the natural beauty of this pocket park, nurturing native species present in the land and even salvaging them from construction areas elsewhere in Victoria.

The effect is striking: the tumbling ferns and bright mosses look like they just belong, as though the walkway has always been that way—but that’s far from the case. At the start of 2006, Davies says, the area was thick with ivy and blackberry bushes, which choked out the native species.

“People had been using it as a rubbish dump,” she said. “We found bundles of newspapers...still bundled up, a lot of broken glass, and general household rubbish.”

It was Rick Marshall, a lifelong gardener who on his twice-daily walks along the path eventually decided to rally his neighbours to restore the area. Through this effort, he met Davies and many of the other volunteers who became essential to the project.

With a dozen volunteers and their proposal for the restoration approved by the city, the Friends of Brighton Walkway was born. They officially broke ground on April 26, 2006, and quickly got to work removing the refuse and invasive species.

The deep-rooted grip of the unwanted plants didn’t go easily, Davies says, and it took the help of many strong neighbors to remove it all.

After ripping out the non-native plants, the grounds looked flat and barren. And then, to the group’s delight, they started to bloom.

“We were surprised by the variety and quantity of native plants that were actually there underneath all this overburden [of non-native plants] and came to light when they weren't covered,” Marshall said.

Sprouts of young Garry Oak trees and fields of blue camas rose from the soil, and now grow alongside flowering chocolate lilies and shooting stars. Every year, the native species come back stronger. This is thanks in large part to the continued efforts of the four core members of the Friends of Brighton Walkway.

Davies helped grow the ecosystem with plants from Oak Bay’s Native Plant Garden, where she also volunteers. With support from the Oak Bay Parks Department, Marshall has also rescued native plants from areas where they would have otherwise been destroyed and given them a home at the Brighton Walkway.

A neighbour, one of the hundreds to pass by the walkway regularly, says she has witnessed the restoration efforts since their inception.

“I think they’ve done a remarkable job. It’s not easy work,” she said. “They are much appreciated; every time I see them, I thank them.”

This is not the only effort to rebuild native habitats in Victoria, but instead one of many run by volunteers passionate about preserving the natural beauty of their home. For decades, similar work has been underway at local green spaces including Anderson Hill Park and Uplands Park.

When he first set out with this project, Marshall expected it to take a few years. He never imagined that, 15 years later, he, Davies, and two other volunteers would still be diligent caretakers of the walkway.

And, Marshall says, he doesn’t expect that to change any time soon—“because the damn weeds keep coming back.” As long as the birds and deer keep dropping seeds for invasive grasses onto the soil, they’ll be coming back each Sunday morning to stop the ever-encroaching non-native species from regaining any ground.

This tradition, Davies says, has been a highlight of her week for many years—especially during the pandemic, when this time spent outdoors catching up with her three friends has become all the more sacred. Anyone with a passion for plants and a keen eye for dandelions, she says, is welcome to join them.