June 17, 2021
Get the news and events in Victoria, in your inbox every morning.
Thank you! Your submission has been received!
Oops! Something went wrong while submitting the form. 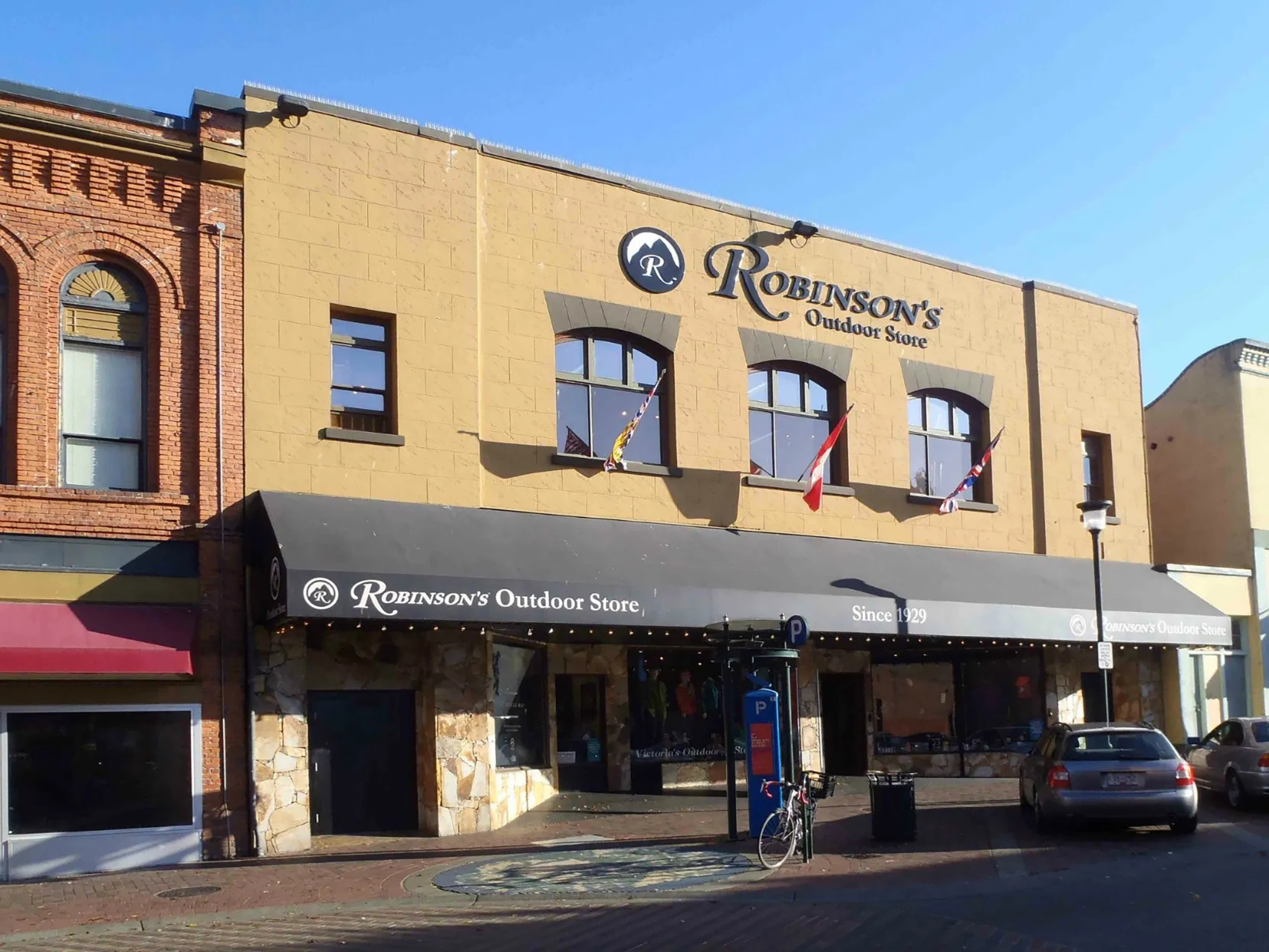 Erin Boggs is the fourth generation of her family to run and own the popular downtown Victoria outdoor adventure store, Robinson’s.

Having worked in the store as a teenager and taken on the operational lead with longtime employee Matt King in 2017, Boggs never thought she’d own Robinson’s herself one day. It wasn’t until she moved back to Victoria from Montreal after six years that Boggs realized how much she loved the outdoor business, and thought about succeeding her family.

Recently, the COVID-19 pandemic brought a heightened interest to the family business as folks looked to escape the confines of their homes.

King estimates that increased demand is from a mix of people looking to try something new, along with experienced campers, fishers, and other former outdoor goers who have had the time to pick up an old hobby.

“For the first time ever, the demand has outweighed the supply, in my day anyway,” said King, who has worked at Robinson’s since 1996.

In the summer of 2020, the BC Parks Camping website crashed due to popular demand. More than 50,000 people tried to book a spot on the first day they were allowed, and BC Parks said that at one point 10 people from across the province were looking to seize a reservation every second.

This year, so far, the interest in the outdoors has yet to subside.

Last month, in preparation for the 2021 summer camping season, Robinson’s ran out of hiking inventory within a month.

When the provincial park reservation website was opened in March, about 6,000 bookings were recorded in the first five hours, and popular campsites like Golden Ears Provincial Park in the Lower Mainland filled up fast.

In response to the interest, the provincial government added funds into the parks system in their 2021 budget which was released in April. The BC Parks capital budget was projected to grow by 57% per year, with the extra cash going towards adding campsites and maintaining trails.

As more people escape into the outdoors, retail shops like Robinson’s are feeling the demand.

With vaccines rolling out and a return to some sense of normalcy over the summer and into the fall, the question now is whether those who got involved in outdoor activities will continue to seek wilderness adventures in the years to come.

One of Robinson’s biggest new draws, Boggs says, has been fly fishing equipment. She credits the sport’s physical-distance nature as a reason for the store’s success in the pandemic.

Al Ehrenberg has owned Gone Fishin’, an outdoor store with four locations across Vancouver Island, since 1993. Aside from specific events, like a highly populated fishery drawing a crowd, he has never seen this much general interest in fishing or the outdoors.

“[I’ve] probably never seen [this popularity] as a general thing, where people are exploring all kinds of outdoor activity,” Ehrenberg said.

Also at the beginning of the pandemic, hunting and freshwater fishing licences were in huge demand. The amount of hunting licences sold, specifically in the first three months of 2020, doubled the number sold during the same periods in 2017, 2018, and 2019.

Ehrenberg also had supply chain issues, which he estimates are from a variety of factors—including the extra consumer demand.

“The procuring of inventory is not quite as easy as it once was. There’s a lot of reasons for it, I think the extra demand, and I think there was a lot of lost production time in different parts of the world where businesses and factories were closed.”

Overall, Ehrenberg estimates that his business has grown by about 15% over the past year.

“We’re a well-established business, we’ve been doing this for a long time, so that’s significant growth,” he said.

Additionally, Boggs says, camping equipment such as sleeping bags, shoes, tents, and food flew off the shelves at Robinson’s.

Although the store ran out of stock earlier in the spring, King says, they can adapt to make additional purchases—such as going to multiple different brands—to replenish their inventory faster than a big box retailer.

“We can scramble quickly,” King said. “We can just pick up the phone, send an email, text, or whatever we need to do to get what we need.”

Robinson’s only conducts their sales in-person, but this hasn’t deterred new customers, even during the pandemic. Boggs and King say they don’t offer sales online mainly for the ability to fit and size consumers in their store. And with the renewed interest, their expertise has been helpful for eager folks.

“We’re seeing people coming in, wanting to do their first hike up the Golden Hinde [Vancouver Island’s tallest peak at 2,195 metres],” Boggs said.

“Staff would come up to me super concerned because at first they wouldn’t pronounce [Golden Hinde] right, so we’re like, ‘Why don’t you start with a night on the Juan de Fuca trail first?’”

Will the trend continue?

Both owners of Robinson’s and Ehrenberg believe the trend in outdoor gear will continue for the foreseeable future, although King estimates it will flatline at some point in the next couple of years.

As a business owner in the outdoors sector, Boggs is fascinated with how COVID-19 has changed their typical busy seasons.

Typically, the summer months and Christmas would signal the high points of their sales, but the pandemic has changed a lot of their operations.

“Last year was insane once we reopened, but even now people are remembering what happened last year. So normally we would start getting busy in like April, June, July, but people have been coming in all times [of year] because they’re worried we’re going to run out of it,” Boggs said.

In March 2020, Ehrenberg opened a fourth Gone Fishin’ location in Duncan. Without large fanfare or a grand reopening, as the pandemic forced restrictions across the region, the location was still able to garner attention.

“When it was three quarters full of inventory, it was the end of March last year, so there was not much to do but to open it and it worked really well,” he said.

Since the industry has received a heightened level of interest from customers with various backgrounds, Ehrenberg says, he sees outdoor businesses maintaining a majority level of their business going forward.

Currently, Boggs says, Robinson’s is in “buying season,” a period where they forecast how much gear they need to buy for 2022. Their purchases for gear have increased since before COVID-19, and they are hopeful the demand from this year will continue next spring.

Ultimately, she expects the industry will continue to be busy throughout the rest of this year. However, as restrictions are lifted, the ability to travel and explore new locations will sustain the consumer’s interest.

“I still think that a lot of people who got into camping will continue, but it will go down a bit. But  then the travel side of our business will come back,” Boggs says. “People are itching to go, so even if [camping interest] tapers down a little bit, then this side will really pick up.”