June 11, 2021
Get the news and events in Victoria, in your inbox every morning.
Thank you! Your submission has been received!
Oops! Something went wrong while submitting the form. 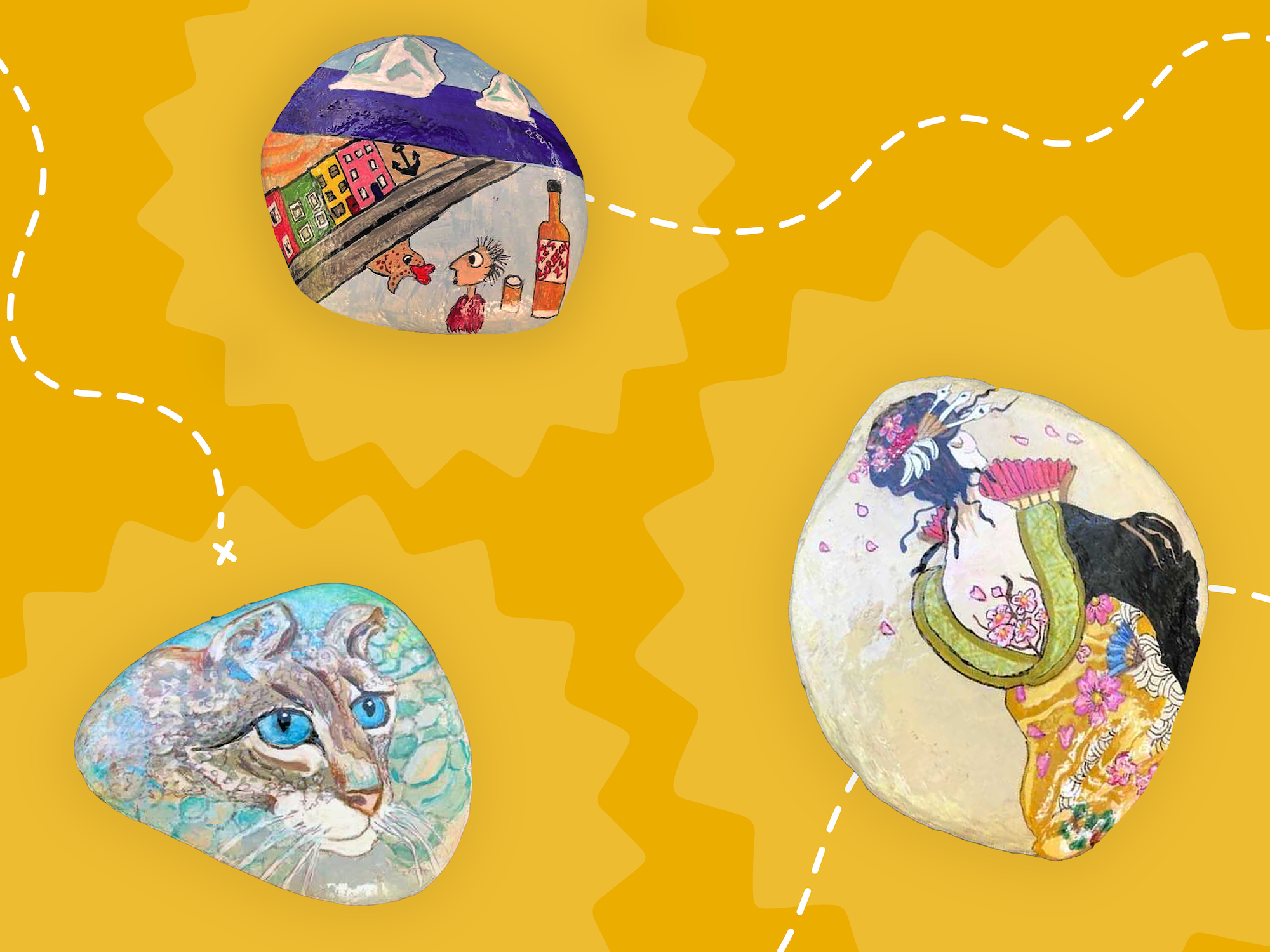 Leah de Braga hadn’t picked up a paint brush since elementary school. But when her mother-in-law was hospitalized with a life-threatening illness in 2019, it was a reignited passion for painting that got her through that difficult time.

“I found a painted rock and I was like, ‘Okay, this is cool, like this looks like fun I can do with my kids,’” she said. “I haven't stopped since.”

De Braga is a co-founder of the Vancouver Island Rock Squad, one of several local online groups that paint rocks to hide on trails, beaches, and other natural areas around the Island. In a Facebook group with more than 600 members, many locals share photos of rocks they designed or found and participate in monthly themed painting challenges for prizes.

The groups have become a form of art therapy, a reason to explore the beautiful natural spaces around the Island, and a much-needed source of social connection during difficult times. During the pandemic, these communities have been a rock to many locals across the Island.

Susan Nelson said organizing and participating in rock-painting groups over the past five years has helped her manage chronic pain and depression. She says she discovered this community at a crucial moment, when she was struggling with a simultaneous combination of chronic pain, no longer being able to work, and becoming an empty nester.

Although Nelson’s parents were professional artists, she’d never considered using art as a way to manage her pain and mental health, until her social worker at the Arthritis Society in Victoria told her about another woman whose life was changed when she began painting ladybugs on rocks for art therapy.

Now, Nelson is one of four founders of the 2,700-member Vancouver Island Painted Rocks and is also an administrator of the Sooke to Sidney Rock Hunt Facebook page, which has over 12,000 members.

It gives her a reason to leave the house for walks instead of watching television, she says, because the idea that she might discover a painted rock is something that lifts her spirits.

“My art has really become an important part of my life now,” said Nelson. “At the age of 52, I have a whole new family that essentially has replaced my workplace family… I was missing that.”

Communities of rock painters are close knit, and not limited to Vancouver Island. The Kindness Rocks Project, which aims to inspire and uplift people through painted rocks with positive messages and images, has dozens of groups across North America—so many that, in the map on their website, you can hardly make out the continent itself from the overwhelming number of red flags indicating all the groups. Not every rock painting group is affiliated with this project, but most carry the same values.

“That’s the whole point of the rock hunt: to spread kindness,” said Nelson.

Earlier this year, members of the Vancouver Island Rock Squad painted rocks to leave around the Island for Mental Health Week with messages of hope and support, including, “You’re enough,” “You’re loved,” and, “This is only one chapter of the book.”

“I thought it was really nice because it was kind of like a blitz, just to put out as many as you can everywhere,” said Betty Young, who is part of two local rock painting groups. 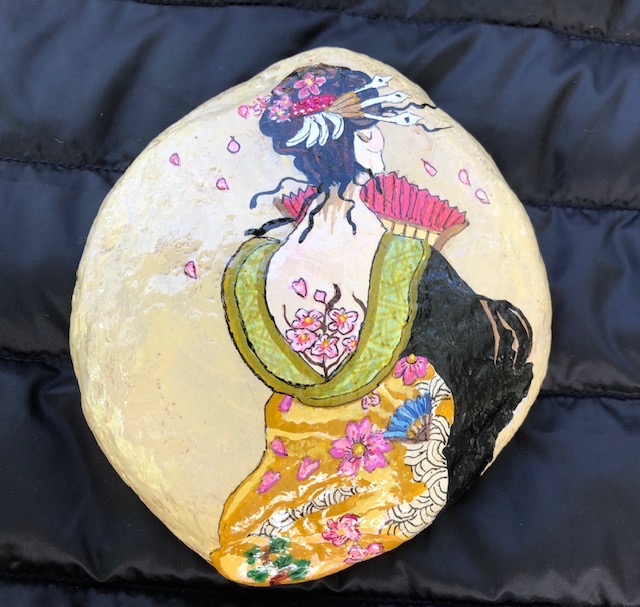 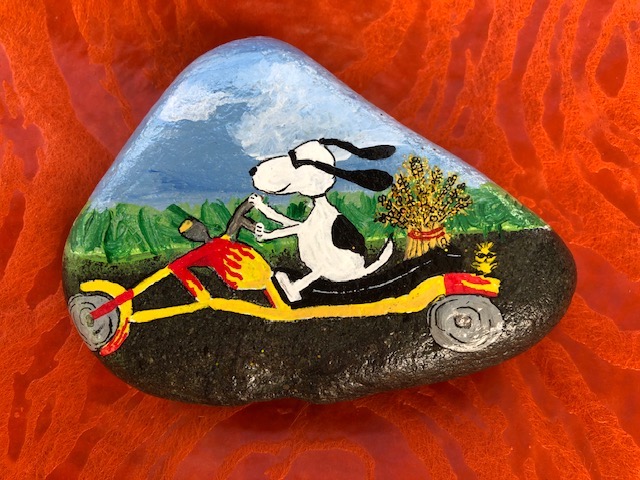 After the bodies of 215 Indigenous children were discovered in a mass grave at the former Kamloops Residential School, one member of the Vancouver Island Rock Squad painted dozens of orange rocks with “Every child matters” written on them. Other members were inspired to do the same and shared their efforts on the group’s Facebook page.

Painting semicolons is Nelson’s way of spreading kindness and support to others. Semicolons are a symbol of support and hope for those struggling with mental health, self harm, and suicide because as Nelson said, “a semi colon means that it's not the end of the story.

“[The point] to me is to leave them out for someone to find and hope that it reaches the person that it's meant to be for,” she said.

Despite never meeting another member in person during the year and a half she’s been involved with the Vancouver Island Rock Squad, Young says she loves participating in their monthly contests and other online events held throughout the year.

In the challenges, the group’s founders post a word for members to paint their own interpretation of—like “boating”—and then share their creations. At the end of the month, everyone who participates is submitted to a draw for prizes, including custom-painted rocks and gift cards. In December, Vancouver Island Rock Squad also organized a COVID-safe secret santa.

Watching her group grow over the past year and become a grounding force for them though the pandemic has meant so much to de Braga. She would never have thought that painting rocks—something she once found a little strange, she admits—would be an activity for her family and community to bond over.

“It blows my mind and it makes me super happy that something like this makes so many other people happy,” she said.

It’s a hobby for all ages and abilities, and members of these communities are more than happy to guide new people through any questions they might have about getting started. Most of all, they just encourage people to not be afraid to get started, and to keep an eye out for inspiration in the form of a painted rock tucked among some trees on their next walk.

“It has really changed my life for the better,” said Nelson. “People will say, ‘Oh, it's just a painted rock.’ But it's so much more than a painted rock to me and so many other people.”

Our Place paints young changemakers at centre of fundraising initiative