HMCS Regina leads a column of vessels past Cordova Bay in mid-April. CFB Esquimalt is in the midst of a massive deployment with the sole purpose of keeping sailors quarantine at sea (Photo by Royal Canadian Navy).
COVID-19 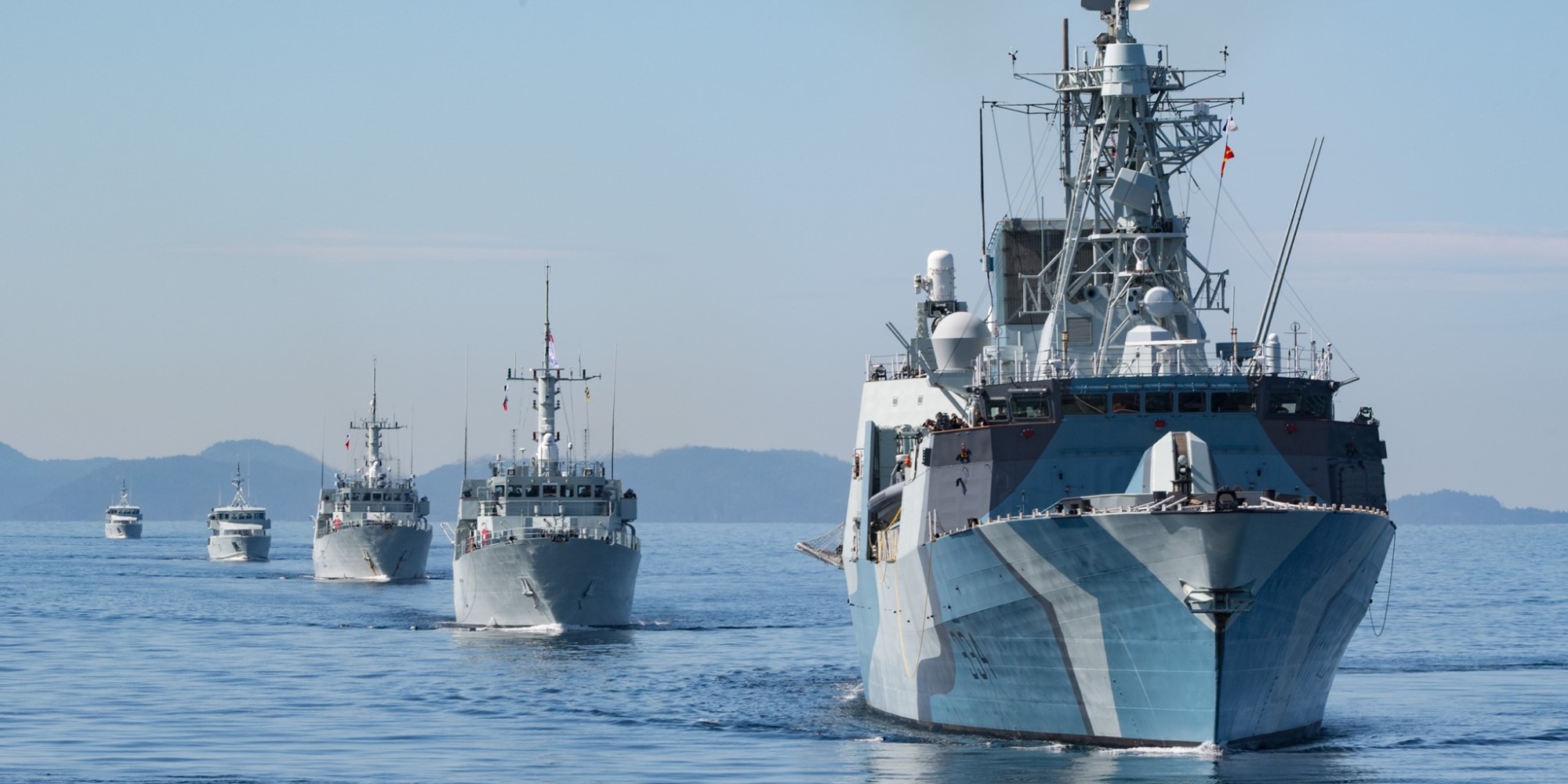 HMCS Regina leads a column of vessels past Cordova Bay in mid-April. CFB Esquimalt is in the midst of a massive deployment with the sole purpose of keeping sailors quarantine at sea (Photo by Royal Canadian Navy).

With devastating outbreaks of coronavirus having already struck several US Navy vessels, CFB Esquimalt is keeping much of its fleet quarantined around Vancouver Island to ensure that it can keep ships sailing throughout COVID-19.

It’s called Operation Laser: the Royal Canadian Navy’s coronavirus-readiness response. While the Canadian Armed Forces has shut down some of its operations in order to better observe social distancing, the navy has needed to throw together an impromptu strategy to ensure that it still has warships at the ready throughout the length of the pandemic.

While isolating the fleet at sea might be keeping the vessels COVID-19 free, crews are reporting burnout as they face endless weeks of intense training while circling the waters off Greater Victoria.

One source described the situation as “working our guys to the bone, ’cause there’s nothing else to do.”

Operation Laser has kept the crews of frigates HMCS Regina and Calgary, as well as the patrol vessel HMCS Brandon, at sea for more than a month. HMCS Whitehorse’s crew hasn’t been home in over two months.

During maritime operations maintaining
safe distances are key. Pictured you can see the view through one of our laser
range finders, useful for close in operations. #WeTheNavy #physicaldistancing #lasers pic.twitter.com/TFcWZyzfbp

Some ships had already been deployed before the coronavirus outbreak on routine operations—HMCS Nanaimo and Whitehorse were engaged in a multinational operation against drug trafficking, and were recalled in early April due to the pandemic. But others have been pushed into early sailings solely to ensure that no crew members become infected. One naval source stated that, other than week-long sailings, HMCS Regina was not supposed to deploy until this summer.

So far, the operation appears to have been a success. Maritime Forces Pacific Public Affairs stated that there have been no cases of COVID-19 on those ships. The downside, according to one naval source contacted by The Capital, is that keeping these ships at sea costs the Royal Canadian Navy hundreds of thousands of dollars per day, with hundreds more sailors at sea than usual.

Morale onboard the vessels participating in Operation Laser and those waiting to deploy has reportedly plummeted. Long periods of time spent at sea is, of course, standard for the navy, but The Capital has learned from multiple sources that the main cause of frustration for crews sequestered at sea is that the high-readiness training in which they are currently engaged is intense, strenuous, and viewed by sailors as unnecessary when the only reason they are at sea is to quarantine.

According to one public affairs officer, “Canadian Fleet Pacific has adopted a rotation schedule for the Maritime Coastal Defence Vessels currently at sea … to allow sailors a pause from operations and to spend time with family while isolating at home.”

Ships rotate in groups of three: One ship’s crew allowed to visit home, albeit while observing strict self-isolation. Another ship at sea but sequestered for fourteen days until the entire crew is confirmed healthy, and a third ship ready for duty and confirmed free of COVID-19.

Of the ships participating in the ongoing operation, HMCS Nanaimo was the first ship to take its week of rest, allowing its crew to spend time in their own homes, before setting sail again on April 24 to begin a two-week rotation schedule with HMCS Brandon and Whitehorse.

Sailors must socially isolate while on land and are on a 24-hour notice should the Canadian government request assistance. Personnel must also quarantine for two weeks prior to deployment. Sailors are screened by ships’ medical teams prior to embarking, but, as The Capital reported in March, the largely asymptomatic spread of COVID-19 has rendered this screening obsolete, as it does not involve testing.

According to a navy spokesperson, sailors are using face masks and protective eyewear when necessary and using “common sense” to maintain physical distance. However, despite the stated attempt at physical distancing, one sailor told The Capital  that proper social distancing is physically impossible onboard a frigate.

It’s these close quarters on board naval vessels that make them uniquely vulnerable to the spreading of disease. This has been most apparent aboard the American aircraft carrier USS Theodore Roosevelt. To date, the vessel has suffered 1,100 active COVID-19 cases among its crew, including one fatality. Last week, a new outbreak was also reported aboard the destroyer USS Kidd.