Capital Daily is part of the Trust Project
latestCOVID
TransportationBusiness
HousingGood News
A police officer places a call at the scene of the shooting. Witnesses report cell service was nonexistent near the site of the shooting.

July 4, 2022
Get the news and events in Victoria, in your inbox every morning.
Thank you! Your submission has been received!
Oops! Something went wrong while submitting the form. 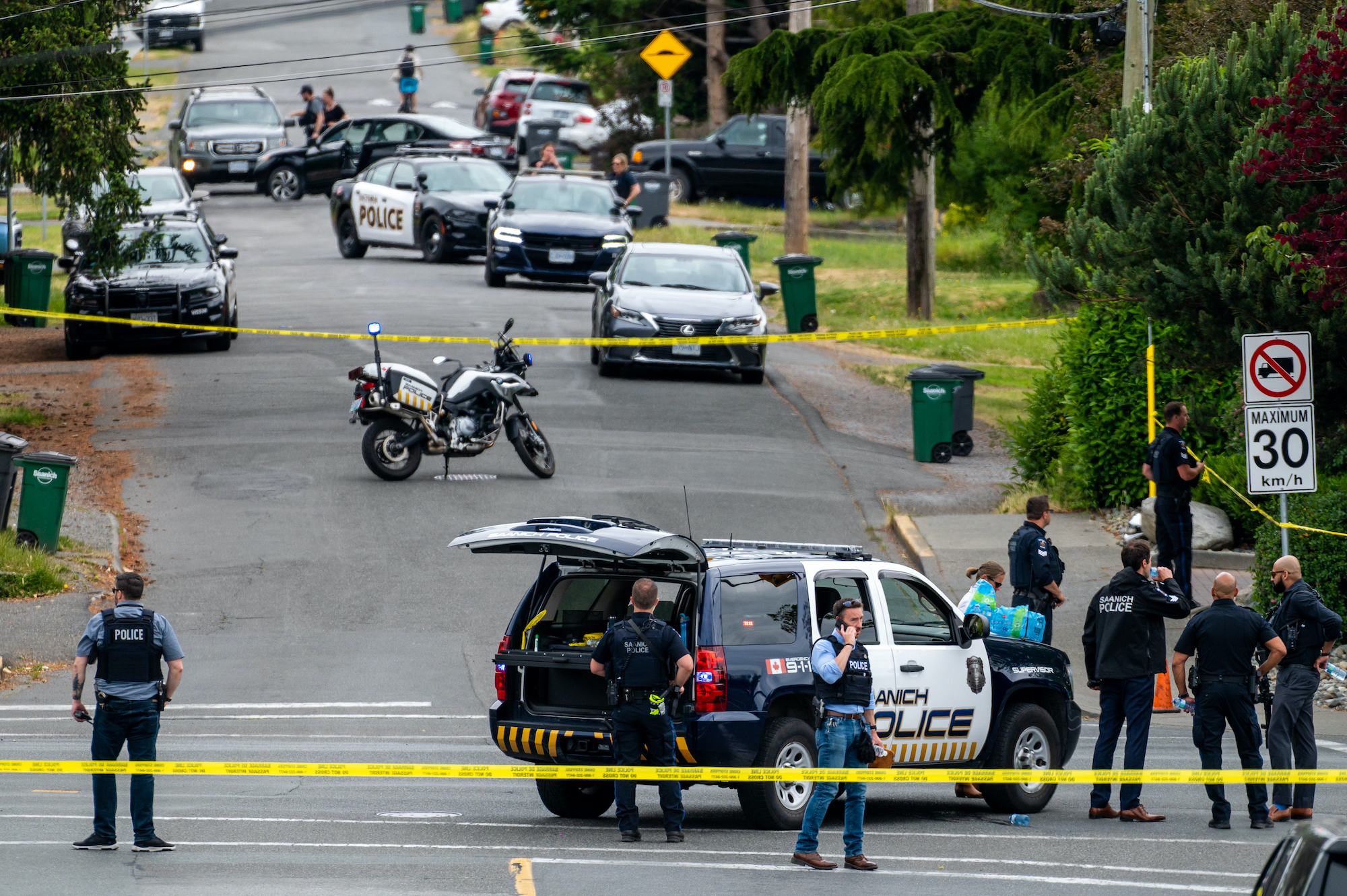 Grant Hames was in transit in the immediate aftermath of the bank robbery in Saanich last Tuesday afternoon, on his phone as the bus navigated the traffic at Cedar Hill X Road and Shelbourne Street.

There wasn’t much information available, but he could see dozens of emergency vehicles and police tape blocking off the area around the bank, which also happens to be where his girlfriend, Emileigh Pearson, lives. He tried to text her, but, he says, “As soon as we got close to the intersection, I stopped being able to message people.”

Others on the bus were having trouble too.

People turned to one another, puzzled, saying they’d lost their connections. “And because we were kind of [in] an active shooter-type scenario,” he says, “everyone’s constantly trying to talk, and so it was pretty obvious that as soon as you entered the intersection, phones cut out.”

The connection only came back when the bus reached Richmond Road, past the area near the robbery.

For 10 minutes following Hames's arrival in the area, with police everywhere and a shelter-in-place order keeping Pearson inside, she says it was “radio silence” from Hanes.

Hames’s Public Mobile cell phone depends on Telus towers. Her phone, on a different network, was working fine—but her roommates’ Koodo phones were having connection problems.

Service in the area has been unreliable since the start of May, when Telus removed a tower that had been attached to a building that was being demolished and didn’t put up a replacement.

That tower was the only source of reliable cell coverage for Telus, Koodo, and Public Mobile customers in the area—an area that now includes last week’s bank robbery.

Freelance photographer James MacDonald, on assignment for Capital Daily to cover the incident, was among those who lost service as soon as he entered the area. Photos he tried to send from the scene wouldn’t send, and even texts and calls failed. Capital Daily’s newsletter editor, Martin Bauman, managed to get on the phone with MacDonald, trying to understand his broken-up report from the ground to publish the latest information.

“He says the rumour is that police are scrambling cell phone calls in the area, because everyone's got piss-poor reception,” Bauman wrote to the rest of the team. That rumour has continued to circulate among neighbours—but there is no evidence for it, and police have given no indication that they were using any kind of scrambling equipment. The robbery was squarely in the middle of what is likely the worst area for cell reception in the city.

RCMP spokesperson Chris Manseau says he has not heard any reports that the lack of connectivity interfered with police operations. Saanich and Victoria police did not respond to requests for comment.

A spokesperson for E-Comm, which handles 9-1-1 calls, said it was not aware of anyone experiencing issues contacting emergency services during the incident.

But just two weeks prior, an elderly woman living two blocks from the bank struggled to get an ambulance.

On the evening of June 11, Zelda Dean was having severe chest pains.

“I didn’t think it was a heart attack—but you never know, right? Because I’m 80,” she explains. Her husband, 93, insisted that she call an ambulance.

She couldn’t get through.

“I kept getting cut off, because there was no coverage,” she says.

Zelda is telling the story on the ground floor of her Saanich building (her condo is on the third floor), and as we talk, my phone on the table has no reception.

Emergency Health Services has tips for anyone experiencing trouble speaking to 9-1-1 operators, including speak slowly and clearly; always be prepared to provide a specific address or clear instructions about the location and give that information to the call-taker first in case the call drops; if you can safely walk to an area with better coverage do so; if you are in a spot that seems to be working, do not move away from that area.

Telus confirmed in a statement on Wednesday that the tower was taken down, and said the company plans to have a replacement tower up by early 2023. It “has deployed a temporary cell site” in the area—but did not say when, exactly, it put up the temporary site and whether it was before or after the robbery and subsequent inquiries from Capital Daily. Repeated requests for clarification of the timeline went unanswered—but Dean says she noted an improvement in her cell service the day after the robbery.

Dean had been fighting, in vain, for weeks to get some kind of resolution from Telus, including asking for a refund on her bill for the time when service was so bad she couldn’t even make a 9-1-1 call.

That call went through on the “fourth or fifth” try, she says.

“I said, ‘Write this address down quickly and send an ambulance!’ and we were cut off,” she recalls. “Seven minutes later, the fire trucks arrived.”

Did you have trouble connecting with loved ones or authorities during the police incident last Tuesday? tips@capitaldaily.ca 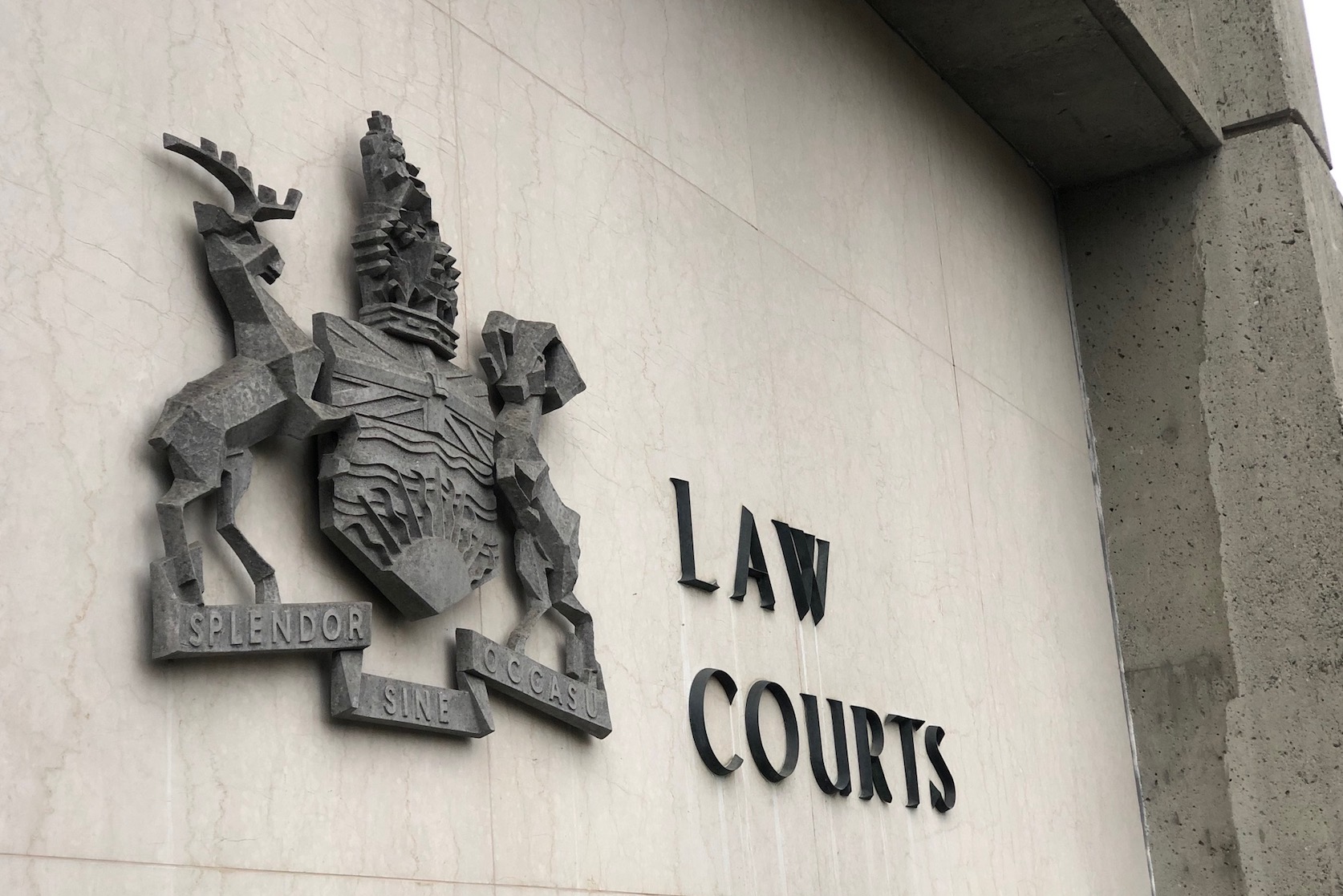 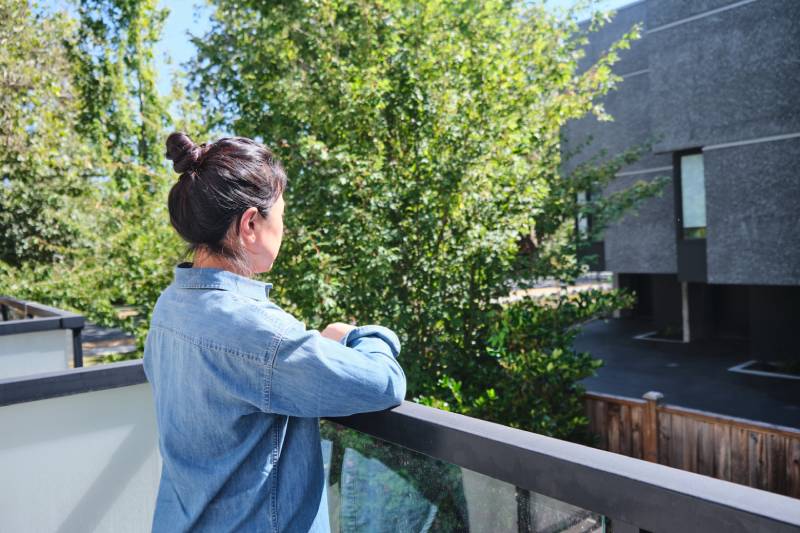 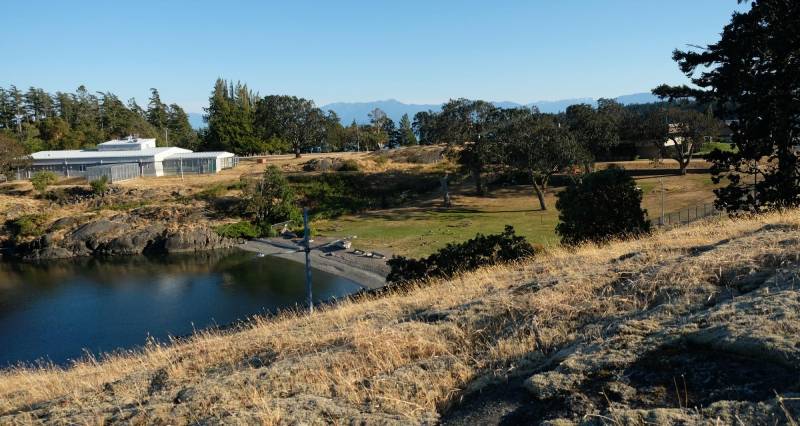