Detail from a report by Japan's public broadcaster, NHK, showing the movement of microdroplets in an enclosed space. Pictured are the droplets remaining in the air 20 minutes after being emitted in a cough by the figure on the right (NHK World).
COVID-19 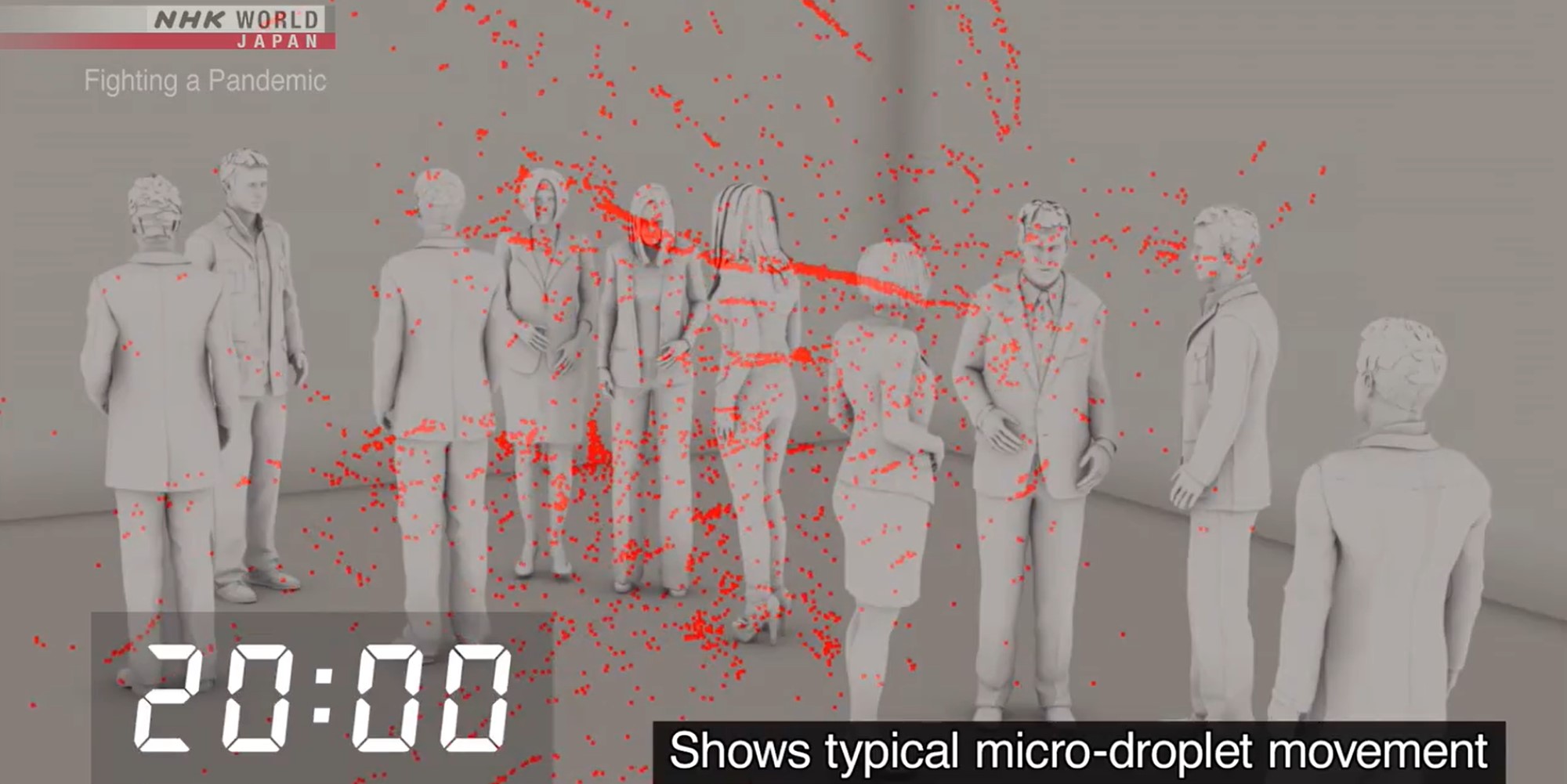 Detail from a report by Japan's public broadcaster, NHK, showing the movement of microdroplets in an enclosed space. Pictured are the droplets remaining in the air 20 minutes after being emitted in a cough by the figure on the right (NHK World).

By the Victoria Day weekend, BC is expected to be within Phase Two of its official Restart Plan, which means reopened restaurants, barbershops, museums and even childcare. It’s a virtual guarantee that the reopening will cause a rise in new cases, but BC is now at a point where its healthcare system can safely manage the consequences. In the nearly two months since BC first shut down, researchers have learned much more about how and where COVID-19 spreads. As we tiptoe into a world with increased social contact, here is our rundown on the best available evidence to show where you’re most vulnerable to the novel coronavirus.

A few Vancouver Island businesses are reopening with the caveat that they may check customers’ temperatures and turn away anyone showing a fever. Most notably, this is the policy of Harbour Air, which has just reopened scaled-down flights between Victoria and Vancouver. Temperature checks might make sense in a flu outbreak, but they’re almost useless when trying to combat COVID-19.

A recent study in Science found that 62% of COVID-19 infections were passed by people who, to all outward appearances, looked perfectly healthy. Most of these carriers were pre-symptomatic, but some were asymptomatic; indicating that without testing they would never know they had ever contracted the virus.

This pattern is reflected in a similar study published in Nature Medicine, which estimated that 44% of secondary infections were spread by someone in the “presymptomatic” phase of the disease. Worst of all, this phase is when a patient is at their most contagious. Diseases like Ebola, smallpox or flu are generally only spread by people who feel sick; but COVID-19 is most dangerous when in the bloodstream of someone who feels fantastic.

As we’ve mentioned before in The Capital, this is the singular reason that COVID-19 has been so devastating. The virus is actually less contagious than earlier coronaviruses such as the 2003 SARS outbreak, but its spread is uniquely difficult to track or contain given that it occurs invisibly.

Unfortunately, the early stages of the pandemic featured a lot of public health messaging urging Canadians to only take precautions if they felt symptoms; this has resulted in many essential businesses continuing to pursue COVID-19 safety measures that prioritize the identification of symptoms such as fever. By now, it’s clear that temperature checks and “stay home if you’re sick” alerts will catch only half of COVID-19 patients at best.

There’s a good reason why mass gatherings will be the absolute last domino to fall in BC’s reopening plans: Groups of people, particularly in indoor spaces, are some of the most fertile ground for COVID-19.

This fact should be obvious from the places that have emerged as Canadian epicentres of the virus: Meat packing plants, prisons, work camps and care homes. All of these are indoor spaces crammed with humanity that aren’t particularly well known for their ventilation.

The danger of enclosed spaces was most vividly illustrated in a March report by Japan’s public broadcaster, NHK. Researchers modelled the movement of microdroplets in an enclosed space no larger than a classroom, and found that a single cough could leave the room swimming in drops even 20 minutes later. “If you open the window and refresh the air in the room, the microdroplets are carried away by the circulation,” it advises.

A tragic real-life case study comes from just south of the border. In early March, just as COVID-19 began surging through Washington State, the 121 members of Mount Vernon’s Skagit Valley Chorale met for their usual practice. Nobody was visibly ill, the members refrained from hugs or handshakes and hand sanitizer was provided. Since that gathering, up to 45 choir members have fallen ill with COVID-19, and two are dead, according to the Los Angeles Times.

The outcome may have been different if members had worn masks, practiced outside or kept at least two meters’ distance from one another during the practice, but to local health officials it’s clear that the Skagit Valley Chorale was felled by the airborne droplets of an asymptomatic singer. Just like yelling or shouting, singing ramps up the “aerosol emissions” coming from a human mouth, and after 2.5 hours of practice the room would have been invisibly swimming with thousands of airborne droplets.

A similar phenomenon was noted in a restaurant in Guangzhou, China. A patient infected with COVID-19 went for dinner with their family, and not only infected them, but the diners at two neighbouring tables. A careful epidemiological analysis of the dining room soon concluded that the neighbouring diners had been done in by the restaurant’s air conditioner. While other tables were spared, it was those downwind of the infected diner who were placed into harm’s way.

‍Kids can definitely spread the virus

Children have proved strangely resilient to COVID-19. Around the world the disease has claimed vanishingly few victims under 10 years old, and virtually all had complicating health conditions such as leukemia. In Iceland, which performed widespread community testing for COVID-19, children under 10 were found to be up to half as likely to test positive for the virus.

A new study incorporating contact survey data from the Chinese cities of Shanghai and Wuhan found that children not only survive COVID-19 better, but they’re also less susceptible to infection. If you expose both a child and an adult to COVID-19, the study concluded that a child can be up to a third less likely to walk away from the encounter with the virus.

However, by easing the lockdown we are dramatically increasing the number of social contacts experienced by children. For nearly two months, children have been living lives free even of the grocery and liquor store trips that have ranked as the most socially active portions of most adult lives; by opening up childcare and play dates children can see their viral exposure spike well beyond what is expected for adults.

A preliminary study out of Germany gives even more reason for caution; it estimates that children contract the virus just as readily as adults, but have seemed less susceptible for the simple reason that they’ve been left out of most COVID-19 testing.

We can’t keep children locked down forever, of course, but it would do well to keep in mind that your teen or preschooler could be the one to pierce your quarantine bubble. Pandemics throughout history have been supercharged by children, and this one may ultimately be no different.

The outdoors are your friend

COVID-19 has seen the closure of a number of outdoor spaces on Vancouver Island, most notably the BC Provincial Park System. In addition, many municipalities have enacted arbitrary closures of outdoor recreational areas, such as Victoria’s ban on parking in Beacon Hill Park, and Oak Bay’s closure of the parking area at Willows Beach.

But the justifications for these closures were never on particularly solid epidemiological ground. In the case of provincial parks, in fact, it was largely done as a wildfire control measure given that fires are particularly disruptive under pandemic conditions.

As the behaviour of COVID-19 becomes known, outdoor environments are increasingly emerging as being where the virus is at its weakest. A study of 318 Chinese COVID-19 outbreaks identified only two that occurred outdoors. Meanwhile, that Science study mentioned above found that only 6% of COVID-19 infections could be attributed to environmental contamination, such as picking up the virus from a handrail or door knob.

All signs point to COVID-19 being at its most dangerous when you’re in an environment where you’re marinating in the breaths of others; public transit being a particularly potent example. Getting outside curbs that risk considerably: Far from discouraging outdoor activities, BC should be moving towards moving as many activities to the outdoors as it can. A farmer’s market may be far less likely to become a node of infection than a grocery store.

It's also worth noting that as the stresses of isolation and social distancing send BC's collective mental health into a tailspin, getting out into the plein air is a doctor-recommended strategy to remain grounded.

On Tuesday, shocking news emerged from the UK revealing that railway worker Belly Mujinga, 47, died of COVID-19 only a few days after being spat on by a man who claimed to have the virus. While Vancouver Island may not have the same level of community spread as London, it’s important to remember that we are still very much in the midst of a crisis that has enabled spit to become lethal.

Long before face masks got the thumbs up from Provincial Health Officer Bonnie Henry, The Capital has been banging the drum on the importance of covering up your face where appropriate. COVID-19 is a respiratory disease, after all, and while a face mask is not a perfect shield against viral spread, anything that limits the spray spewing from a human mouth holds the potential to save lives.

Japan, South Korea and other Asian countries that practice widespread public masking have proved far more successful at battling COVID-19 despite far less warning. And according to Berkeley computer scientist De Kai, this is no accident. In a recent model by Kai, he estimated that if 80% of the US population wore masks, their rates of COVID-19, currently at catastrophic levels, could plunge overnight. There's no reason to believe Canada would be any different, particularly if we're going to be re-entering civil society.

‍Read a more detailed summary on the science of COVID-19 transmission written by immunologist Erin Bromage.