May 4, 2021
Get the news and events in Victoria, in your inbox every morning.
Thank you! Your submission has been received!
Oops! Something went wrong while submitting the form. 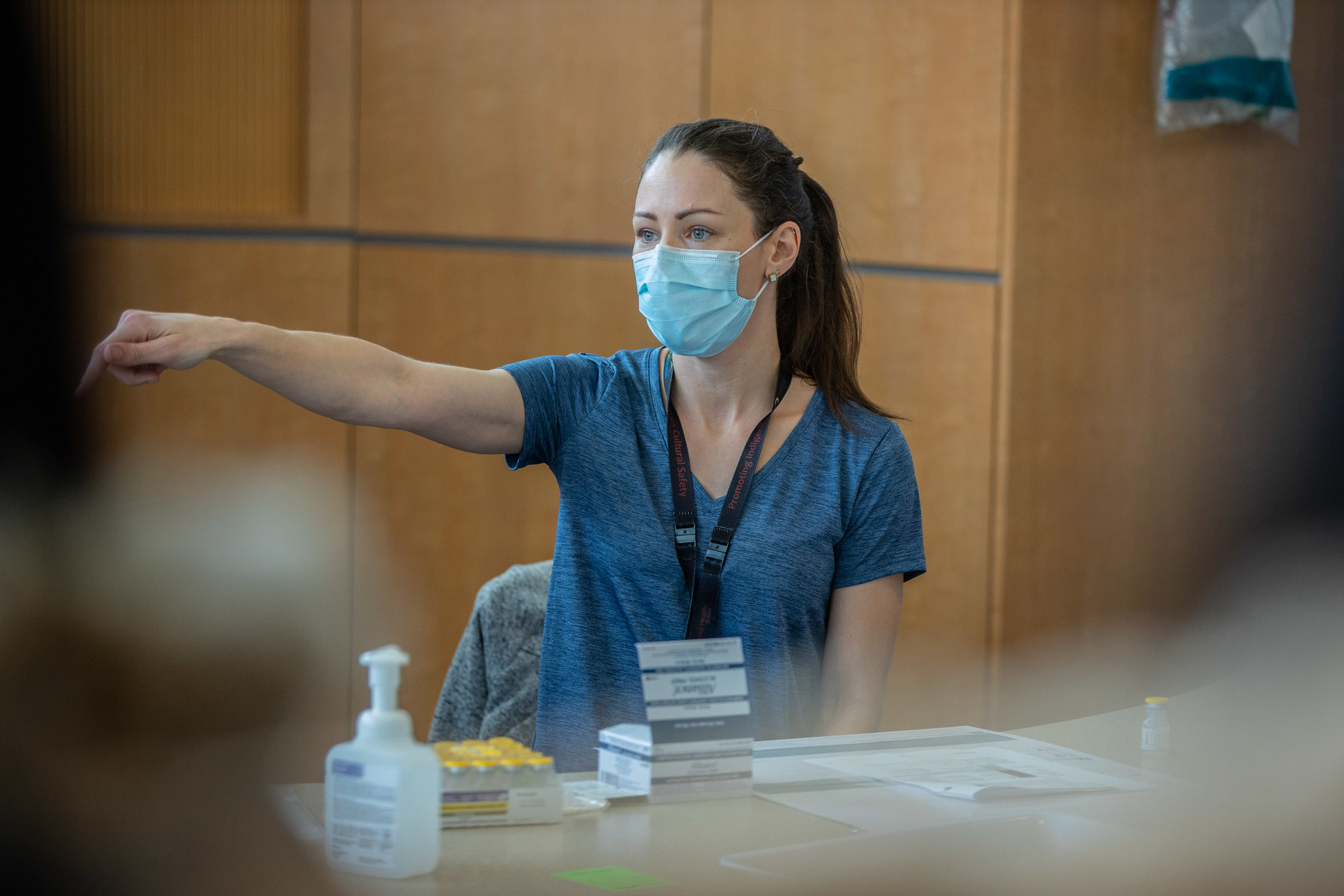 A month after the first set of restrictions were introduced in BC, daily COVID-19 cases have dropped at a steady pace—but the province’s healthcare system is still struggling to manage the strains of the third wave.

Throughout March and early April, COVID-19 cases on Vancouver Island mirrored what was happening in the rest of the province: daily case rates nearly tripled in a fortnight as variants of concern began to overtake the original strains.

Then, on March 29, provincial health authorities brought back some restrictions that were in place during the first and second waves of the pandemic: no more indoor dining, no indoor group fitness activities, and an order allowing WorkSafe BC to shut down businesses where COVID-19 has been transmitted between workers.

And, like clockwork, case numbers started to drop almost exactly two weeks later. But hospitalizations across BC and on Vancouver Island remain at a concerningly high level, putting immense pressure on the healthcare system and particularly on overtired frontline hospital workers.

The good and the bad

When it comes to COVID-19 case counts alone, the decline was more rapid in some places than others.

On Vancouver Island, for example, the rolling average of daily case numbers have nearly halved since its peak in early April. Meanwhile across BC, cases have dropped by approximately 20% since its peak.

“It looks like the message has been heard loud and clear on the Island and caused people to reduce their activity levels,” Dr. Sarah Otto told Capital Daily. “So I think we may have averted disaster.”

Otto is one of 11 experts in an interdisciplinary group called the BC COVID-19 Modelling Group which stands independent of provincial health authorities and has thus far presented two reports on the pandemic and its trajectory in BC.

Their first report came out on April 14 and found that with the trend in case numbers at that point, transmission needed to drop by 40% in order to avoid overwhelming BC hospitals.

Five days later, the BC health ministry unveiled data that showed just how close hospitals came to reaching that point. Hospital beds in four out of five health authorities were nearly at 100% capacity, with Island Health having the most available beds, at 89.8% occupancy. In Vancouver Coastal Health region, even the critical care beds were full.

Since that last update on April 19, the province has not released any new information about what hospitals and healthcare workers are facing in terms of capacity. After a full week of requesting this data from both Island Health and the provincial Ministry of Health, Capital Daily found out that in the last week of April, overall hospital occupancy has dropped by about 3%, but ICUs in the region had more patients than before.

There was some concern that redirecting patients from the Northern Health authority—who normally would have received their specialized treatment in the Lower Mainland—to the Island may overburden the system here. That fear ended up being unfounded; in the last week of April, only three patients arrived in the Island Health region from Northern Health and Yukon, and none of them have tested positive for COVID-19.

At a press conference on April 29, Health Minister Adrian Dix said 12 scheduled, non-urgent surgeries have been cancelled in Island Health between April 19 and 25, but those cancellations have nothing to do with patients being transferred from other parts of the province.

“What you’re seeing in Island Health is the ongoing significant pressure on the healthcare system, partly related to COVID-19 because there are some cases in Island Health hospitals,” said Dix.

“But Island Health’s situation has nothing to do with the COVID-19 situation or transfers from other health authorities.”

‘They’ve been at this for a while’

The majority of patients taking up beds in Vancouver Island hospitals are not there because of COVID-19, but for other reasons. Overall, the region has the ability to accommodate 1338 regular patients and 73 critical care patients. As of Friday, there were 21 patients admitted in regular care, and six in critical care, due to COVID-19.

What’s really keeping the pressures high are hospitalizations for other causes, according to Dix.

“What you’re seeing is some significant pressures in terms of non-COVID-19 cases in hospitals as well as the small amount of pressure [from COVID-19],” he said. “All of that, after a year of the COVID-19 pandemic, does put pressure on staff.”

“For every person in a critical care bed, whether they are being treated for COVID-19 or another serious medical condition, a team of dedicated professionals is required to deliver care,” it reads.“But our health-care teams are tired. Many are on the verge of exhaustion.”

According to a spokesperson for Doctors of BC, hospital workers have been asked by the province to not publicly discuss the situation inside hospitals, and many of those that Capital Daily spoke with are not willing to defy that request.

Dr. Matthew Chow, Vancouver-based psychiatrist and President of Doctors of BC, said overall, physicians and hospital staff are feeling more fatigued than ever before during this pandemic.

“This has been going on a long time, and the usual mechanisms that we use to support each other and support ourselves, such as gathering on a social basis, engaging in sports, going on vacation—those are heavily restricted right now,” said Chow.

“That has reduced the number of outlets for people to deal with the stress and emotions and fatigue. So certainly in this third wave I'm hearing about a lot more tiredness [and] frustration.”

Chow also talked about another trend seen by hospital workers these days: many people are no longer following some of the public health guidelines that have been in place since October. As a result, more and more people are ending up in hospital after disobeying COVID-19 restrictions, and there is less tolerance for that behaviour among healthcare workers who have been battling the pandemic on the frontline for over a year. They’re tired of putting their own health on the line to treat people who can’t be bothered to protect themselves.

“We talk about variants [of concern] and...it's true that variants are a serious threat. But at the same time, it's actually people just gathering, getting close to one another indoors—which has been prohibited for a while—that's spreading the virus,” said Chow.

“When the rules were first announced after Halloween, people were pretty good about adhering to them. And then over time, people have, I think, gotten worn down and have started to gather again.”

Overall, daily COVID-19 cases are on the decline now, which could indicate that people are going back to following the rules.

While there are enough hospital beds and surge capacity in the province to handle more patients in the meantime, the real concern is burnout among staff.

“There's enough capacity in the overall provincial system to handle that surge. The difficulty, though, is that we have to staff those physical resources and the staff that are doing that are tired. They've been at this for a while.”

Things won’t get easier for healthcare workers for a little while longer.

The latest projections released by the independent BC COVID-19 Modelling Group on April 30 indicate that while transmission rates have, in fact, dropped by 30 to 40% since March, hospital and ICU occupation rates in the province are expected to stay high through May.

The report also points to a lack of sufficient data from the province to allow them to make more accurate projections. For example, the experts behind the group don’t have access to the province’s hospital and ICU data broken down by variants of concern. The report notes that this data is needed to better estimate what’s going to happen over the coming weeks.

As case rates decline and vaccinations ramp up across the province, there is some room for cautious optimism.

“I wasn't sure if the restrictions on restaurants [were] going to be enough,” Otto said. “But I think that plus the concerns over full ICU and hospitals has really caused people to take heed, and change their behavior and reduce the rate of spread of COVID.”

In addition to the measures introduced in late March, the province also recently upped the ante by giving RCMP powers to enforce travel restrictions to and from health regions.Police will have the ability to stop travellers at highway checkpoints between the Lower Mainland and the Interior and Northern health regions, and ask whether their travel is for essential purposes.

In an announcement on Friday, Minister of Public Safety and Solicitor General, Mike Farnworth, announced that drivers found contravening this new order could be issued a fine of up to $575.

The process will work differently on Vancouver Island: instead of police checkpoints, BC Ferries will continue to be in charge of asking passengers whether their travel is essential or not. If someone says they’re travelling for non-essential reasons, they’ll be denied boarding and BC Ferries has the ability to enlist the help of municipal police to issue fines if necessary.

For healthcare workers, the prospect of a faster immunization program is the biggest light at the end of the tunnel.

Starting this week, BC is expecting to receive shipments of the single-dose, fridge-stable Johnson & Johnson vaccine, and the age-based immunization program is expected to ramp up, with the promise of a million more Pfizer doses arriving in the province soon.

“That creates, I think, the greatest optimism because we've just seen how successful the vaccinations are in places like Prince Rupert, the Downtown Eastside of Vancouver, and in long term care,” said Chow.

“We're vaccinating [the population of] a small city basically every day—like 40,000 to 45,000 people a day—with really powerful, really effective vaccines. And we're seeing the impacts of those vaccines already.”