North Vancouver Island hospitals close overnight indefinitely
Good news
News
Based on facts either observed and verified firsthand by the reporter, or reported and verified from knowledgeable sources.

July 30, 2021
Get the news and events in Victoria, in your inbox every morning.
Thank you! Your submission has been received!
Oops! Something went wrong while submitting the form. 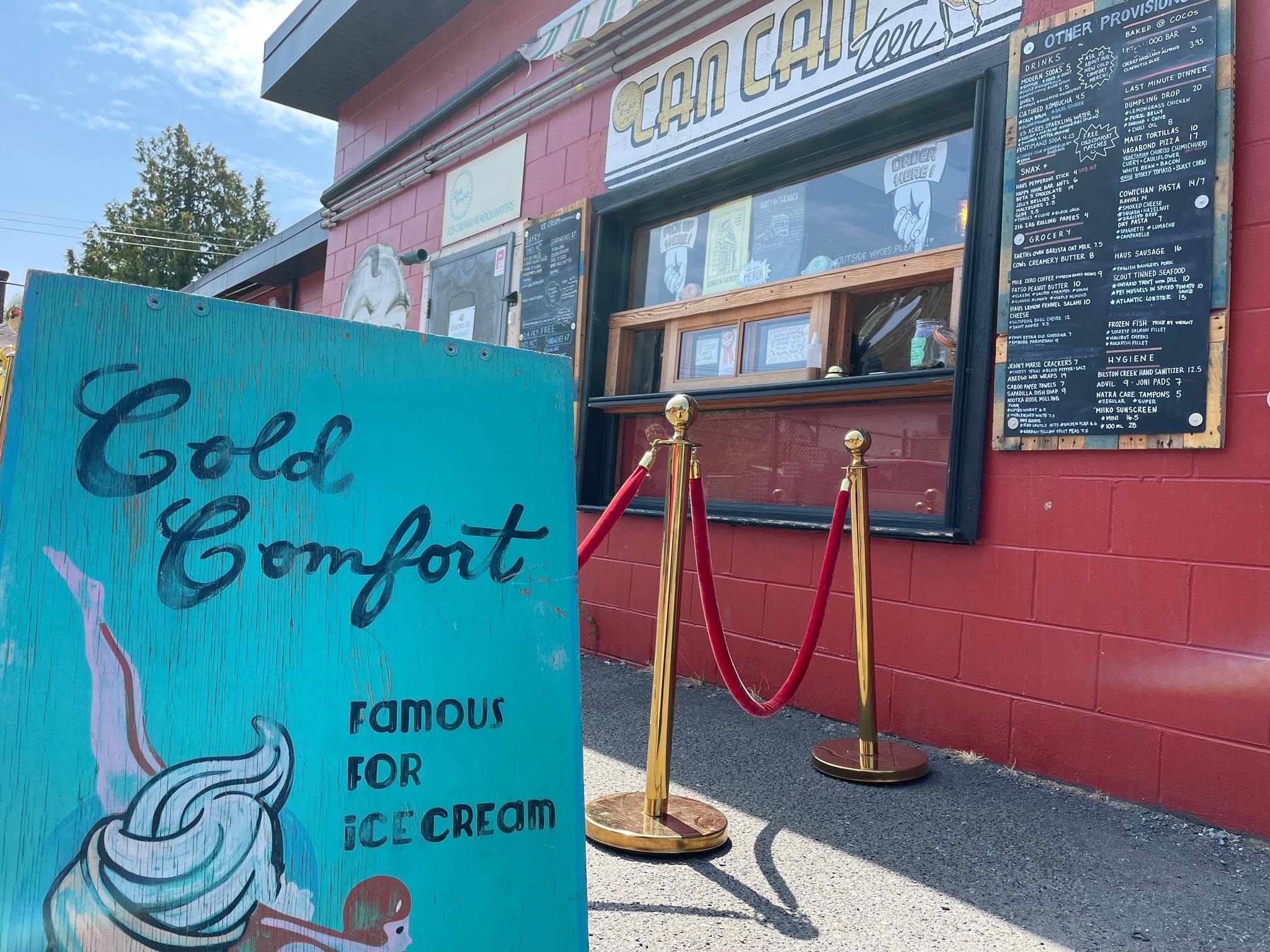 For many owners of Victoria’s locally owned, homemade ice cream stores, their business is founded on more than a desire to just make ice cream. It’s a place to experiment with what’s possible in the world of frozen treats, break down barriers like non-dairy options, and escape from the mundanity of their former desk jobs.

In the absence of tourists during the pandemic, Victorians have embraced their local ice cream vendors. Some, like Cold Comfort’s founder Autumn Maxwell, didn’t just survive; they thrived: although the pandemic winters were hard, the spring and summer of 2020 was a record time for sales.

There’s certainly no shortage of places to grab a scoop in Victoria, with more than a dozen local and chain establishments featured in and around the core downtown area, and some circulating through the city’s streets too. But what is it about Victoria that has inspired and supported so many independently owned ice cream restaurants to flourish throughout the community?

“Because Victoria is really focused on local foods, there's a really big draw for that and so people sort of go out of their way to support local businesses,” said Willow Rode, one of the owners of Kid Sister Ice Cream.

“I think it’s just [due to] a growing community, as well as a community focus on local food.”

Maxwell says word has gotten out, and Victoria is even attracting ice cream chefs from elsewhere.

“On the coast, it’s kind of a little paradise—a lot of [ice cream] people are picking up on that and moving here, and there seems to be room for all of us,” said Maxwell.

True to the city itself, each of Victoria’s locally owned ice cream shops offer their own unique and ambitious flavour to the ice cream scene. Capital Daily sat down with the people behind some of Victorian’s favorite ice cream spots to get the full scoop.

The business was started by Rode’s mother and stepfather, the latter of whom had an extensive background in the local food industry and organic farming. Rode’s stepfather, Brett Black, was inspired by the paletas he had seen on trips to Mexico, and wanted to combine that with his love for fresh ingredients.

In her time running Kid Sister, Rode has gotten very familiar with the community of local ice cream entrepreneurs in the city.

“There's definitely a community vibe,” she said. “Often during the busy season there's not as much time to collaborate, [but] we support each other for sure.”

Although over Kid Sister’s 11 years in operation the business has evolved to sell more classic ice cream, Rode says their niche still lies in paletas and other frozen treats made with fresh fruit.

“We do these bars that a lot of people don't have access to and that you can't get in the store,” Rode said. “It's a little special.”

Some of the fruit also carries with it an added personal touch. The marionberries used in the store come from Black’s yard, and many of the other fruits are grown by farmers Rode and her family know.

Customers might be surprised to learn how much goes into every Kid Sister popsicle, which are entirely homemade. It’s a time consuming process to cut, juice, and peel the fruit to make each bar—but worth it, Rode says.

Although Kid Sister has changed names and locations over the years, Rode is thankful for the loyal community members who continue to come back.

“I've seen a lot of faces now that I saw at the very beginning when we opened all those years ago, seeking us out and finding us,” she said. “I feel like that is very Victoria, and really special.”

Over the past decade, Cold Comfort has sold more than 500 imaginative and eccentric flavours of ice cream—and according to Maxwell, they’re not looking to slow down anytime soon.

Experimenting with new flavours of ice cream has been among Maxwell’s favourite pastimes since before Cold Comfort opened in 2010. In her previous job as a waitress at a local restaurant, she would bring in batches of homemade ice cream that she engineered at home thanks to her keen sense of smell. This evolved into a subscription-based home delivery program, and eventually the Fernwood storefront that is home to her business today.

Now, Maxwell says, she often isn’t the one hand making the ice cream served at her store. But through the store windows at all hours, you can see her team hard at work preparing the ice cream and sheets full of cookies for Cold Comfort’s signature ice cream sandwiches.

Although she was among the first to launch a local artisan ice cream business in Victoria, Maxwell has certainly not been the last.

“People like variety and we all have our own little niche, which helps too,” she said.

Cold Comfort’s niche focuses largely on ice cream sandwiches, treats like baked Alaska, and offering ice cream flavours that are accessible for those with dietary restrictions.

March to September 2020 was a time of record sales at Cold Comfort, although the colder pandemic months—accompanied by dining restrictions—also brought them their biggest deficits since opening. During the depths of the pandemic they opened a small market adjacent to the store, Coco’s Provisions, which faced a difficult start due to the lockdowns. Now, many of the goods offered through Coco’s are available at the main Cold Comfort window.

Paying forward the support she’s received through Cold Comfort has been one of Maxwell’s goals. Four years ago, she started a scholarship fund for Indigenous high school students that part of Cold Comfort’s proceeds went towards every July.

The first year, they raised enough for $1,500 scholarships for two local students. Last year, the fundraiser garnered enough donations for four students to each receive $1,000—something Maxwell says they’re on track to do again this year.

Overall, Maxwell hopes to create a supportive, comfortable place for everyone through her store.

“Just like making a space nice to everyone that’s inclusive and encouraging for creativity and diversity,” she said. “That's what I stand for and I feel tha, Cold Comfort, it's sort of an outlet to send that through.”

To Kevin Fung, Parachute’s success is the culmination of years spent chasing his passions. Before becoming a restaurateur, Fung went to school for computer programming and spent more than half a decade working desk jobs—until, one day, he could no longer take the confines of his office and left to run Umi Sushi Express.

Soon after, he partnered with Robyn Larocque from the Victoria Pie Company, who at the time was creating the foundation for an ice cream business as a project for her MBA, to form Parachute.

“We just thought we need high-end ice cream but that's more approachable, so that it's more family friendly,” Fung said.

“Initially we started [Parachute] as kind of like a fun passion project. We didn't expect it to be a business—more, then, just hopefully breaking even.”

Since 2016, the business Fung once considered a hobby has grown to not only be fun, but a profitable community staple. In that time, they’ve also expanded to a second location in Langford.

“It kind of just exploded,” he said.

One of Fung’s favourite parts of his business is when they are able to give back to the community, particularly through creating custom flavours that have a portion of the proceeds going to charity—like their flavour ‘Candy Queen', a pride-themed ice cream with proceeds benefiting LGBTQ+ causes.

Both the job itself and the people he gets to work with have made this a highlight of Fung’s career.

“I go to work and I really like everybody, authentically,” he said. “I hope I'll be in contact with them for a long time.”

During the pandemic, Parachute saw an influx of support from the community and City of Victoria that helped keep them afloat. Fung says that thanks to this, the store’s sales remained stable enough that Parachute actually didn’t qualify for any pandemic subsidies.

“The number of people that went out of their way to buy something and buy more than they would normally buy just because you're a local producer was really, really heartwarming and touching,” Fung said.

In his time as a local ice cream artisan, Fung has witnessed people coming together to share his ice cream at all kinds of events, from celebrations to funerals. When asked about the legacy he hopes Parachute will leave, he says he hopes it will bring people together and inspire them to take a chance on their own passions, like he and Larocque did.

“If I could be part of a business that adds positivity to the world and community at large, I think that's cool,” he said.