April 16, 2021
Get the news and events in Victoria, in your inbox every morning.
Thank you! Your submission has been received!
Oops! Something went wrong while submitting the form. 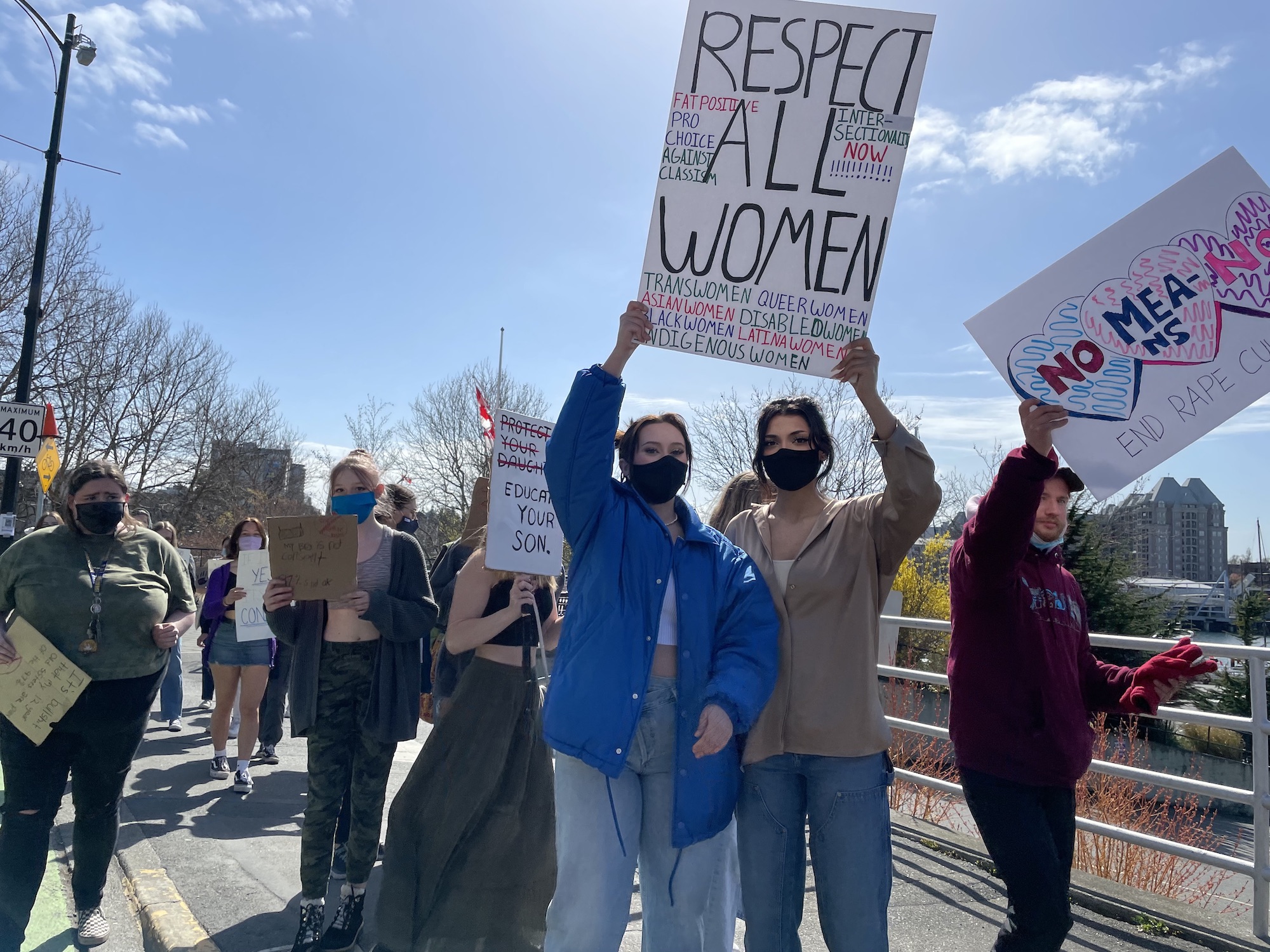 One night in late March, Kailyn Ford couldn’t sleep. A comment made by one of her classmates about sexual assault, which she would later describe as “extremely inappropriate,” rattled around in her head—along with the many other similarly upsetting statements she’d heard from her peers.

At 16, Ford is an eleventh grade student at Stelly’s Secondary School and a survivor of sexual assault. After that night, she knew she had to become something else: an advocate calling for the awareness and prevention of sexualized violence.

“Probably 90% of the people I know, [sexualized violence] has affected,” she said. “Something needs to change, and change won’t happen unless we make it happen.”

She got to work planning a rally to call for the end of sexualized violence and advertising it on social media.

In the days leading up to the rally, Ford said she received hateful messages from boys opposed to the event. She fought against the gnawing fear in the back of her mind that nobody would come and that she’d be embarrassed and alone.

When Ford got off the bus at Centennial Square that day, she was in awe—dozens of high school and middle school students from across Greater Victoria had already begun to assemble.

Next to her, Ford’s friend said, “I told you that you wouldn't be alone.”

By the time the students began their march down the sidewalks of Victoria, the group was more than 100 strong, with even more people joining as they encountered the rally.

In recent months, young people like Ford have been at the forefront of a reckoning against sexualized violence in Victoria. More than a dozen allegations that a former employee of Chuck’s Burger Bar repeatedly harassed and assaulted women led to multiple protests and the restaurant’s closure. Similar accounts have emerged around employees of other local restaurants, and four local real estate agents accused of sexual assault have been fired.

These allegations speak to a deeper societal issue, local advocates say. One in four women in North American will be sexually assaulted in her lifetime, with members of the LGBTQ+ community facing disproportionate rates of violence.

About 60% of those who have experienced sexual abuse or assault are under 17.

These waves of allegations—and the anonymous Instagram account that published them—have brought together a community of survivors and allies united in bringing awareness to sexualized violence in Victoria.

“Seeing Chuck’s and everything that happened there—the complacency, the abuse of power—it just completely enraged me,” said Alex Kierstead, a survivor who was active in protesting Chuck’s Burger Bar in the wake of the allegations.

It was on the front lines of those protests that Kierstead met the individuals with whom she founded No Means No Apparel, a clothing brand intended to increase awareness of the harm of sexualized violence. All the business’s profits are donated to the Victoria Sexual Assault Centre (VSAC). After the first round of shirts, designed on themes of consent and empowering survivors, sold out, No Means No has used its platform to promote resources and education on sexualized violence.

During April, which is Sexual Assault Awareness Month, they’ve made it their mission to post “30 days of allyship” on social media, with guides on topics including bystander intervention and intersectionality. Kierstead also co-founded an online survivor support group for those who have been affected by sexualized violence and their allies.

“It's very inspirational to see people starting to come out with their stories over the past few months that have been holding them for years,” Chelsey Thorpe said of the support group she helped to co-found with Kierstead and other members of the team.

“It's great to be able to provide a safe place for them to ask for resources or assistance with coping mechanisms, and [help them] know what they’re feeling is normal.”

In addition to taking to the streets, Ford, Thorpe, and Kierstead have also reached out to Victoria city councillors to call for action on the municipal level—particularly after Coun. Stephen Andrew’s now retracted claims that Victoria does not have a “rape cutlure.”

Kierstead and Thorpe met with Coun. Sarah Potts to discuss their ideas for the city council’s response, including trauma-informed training for members of the council.

“We're seeing the community centre around survivors and hear their stories. I think we have the responsibility to listen as well and to make space for that, and to really see where other institutions have failed and where community is able to fill those gaps,” Potts said.

This renewed focus on addressing sexualized violence has ignited work that had stagnated, such as a motion Potts, Coun. Jeremy Loveday, and former councillor Laurel Collins created to pursue mandatory sexualized violence training for local bars and restaurants. Although the motion passed, city staff have yet to report back on options for council to vote on in order to put that training in place.

However, Potts says community attention on this issue has helped “re-engage that work,” which hadn’t moved much in the past years.

At the centre of this recent movement has been the Survivors Stories Project, an Instagram page created in the summer of 2020 as online allegations of sexual assault and harassment in the tattoo industry swept Canada. The founders of this page declined to comment for this article.

Carissa Ropponen, spokesperson for VSAC, noted that this account has played an important role for many survivors.

“I think social media can be a really powerful tool for building solidarity, and to find support and empowerment,” she said.

However, Ropponen noted this is not something that comes without its challenges.

“For the people who are running the Instagram account and facilitating this sort of conversation online and for the survivors themselves who are speaking out and sharing your story, there can be backlash from perpetrators and from the community more broadly,” Ropponen said.

In spite of the backlash Ford received for speaking out and organizing the rally—she’s lost a few friends over this, she says—Ford is glad to provide a voice for young survivors in Victoria.

Those at the front lines of this movement are clear that this reckoning is far from over. There’s lots of work to be done, from creating a greater understanding of consent from a young age, to providing more avenues for justice, to holding officials to account.

On Monday, April 19 at 5 pm, Kierstead and other survivors will host a rally outside the BC Legislature Building to continue their calls for action.

“[With] all of these survivors coming forward, we’ve been able to collectively come together and get our voices heard and be like, this really is a problem that we've been sweeping under the rug for too long,” Kierstead said.

“To see younger people come forward now is just amazing, it's just really indicative of the culture change and that we can make it better for future generations.”