The Littles’ last stand: how a modest farm stand got a couple into a neighbourhood jam
Photo: Community Food Support / Submitted
Good news 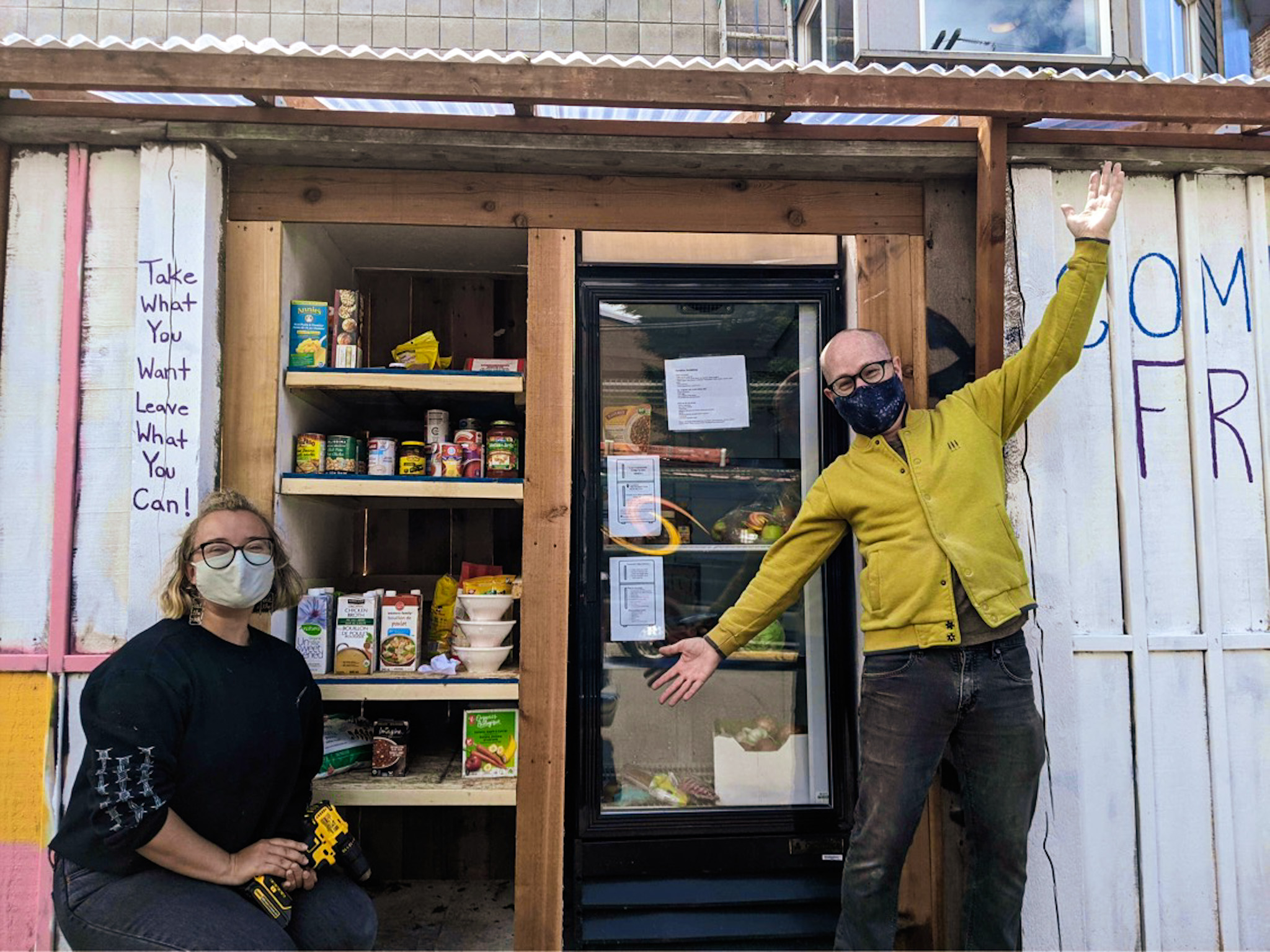 You might have seen them in Toronto and New York. Now, the community fridge movement has made it to the streets of Victoria.

Last Saturday afternoon, volunteers gathered on David Street in Rock Bay to bring their vision of Victoria’s first community fridge and pantry to life. Sawdust flew as they cut, painted, and assembled the deep pantry shelves and a sturdy stand for the new free fridge.

A surge of community fridges and other grassroots food security efforts have sprung up across North America since the start of the pandemic—a time when an estimated one in seven Canadians experienced food insecurity. These free fridges are based around a simple concept: take what you need, and leave what you can. There are dozens of community fridges in Canada, and more than 150 in the United States.

By leaving it freestanding and unpoliced, organizers hope to inspire the community to share in maintaining and restocking the fridge—however, every week, Community Food Support, the group behind this project, spends about $300 stocking hampers with food they buy and rescue from being discarded by local businesses.

“Part of this is about getting people who need food fed, but I think it's also about food redistribution,” said Tina Athena, a member of Community Food Support. “It's like, how many pounds of food every day go to waste? Whatever we can do to find a new home for food when other people need it just makes a lot of sense.”

They have volunteers scheduled to check in on the fridge and pantry twice a day to clean and restock as needed, but hope that the community will take on a shared stewardship of the space as well so it may eventually become self-sustaining.

“I think the dream is that the community really takes ownership of [the fridge], frequently stocks it, checks up on it, and feels responsibility to contribute to make sure the fridge is stocked and ready for people who need it,” said Elora Adamson, an organizer with Community Food Support for this project and their weekly food hamper program.

Community Food Support first formed in April 2020 at the start of the pandemic to help address food insecurity in Victoria. They aren’t an official nonprofit or organization, and rely on mutual aid, donations, and the support of volunteers to fuel their programs.

Through collecting rescued and donated food from local businesses, they assemble 70 hampers each week to deliver to families in Greater Victoria. Since they began, Adamson says hampers have continued to be in high demand.

For some time now, Community Food Support has looked to expand their services to include a free fridge and pantry.

“We wanted something that people could access 24/7,” said Hannah West, a member of Community Food Support. “Food [hamper] delivery is great and it's accessible in a different way, but we can only do it once a week.”

Finding a model for Victoria’s community fridge proved easy, due to the wealth of resources available from organizers in other cities.

“It was really cool to be able to send potential hosts a ton of information that was borrowed and gathered from other groups that already have fridges up and running [including] pictures of what it looks like and examples of how it will be maintained,” Adamson said.

The hardest part, in the end, was finding a place to host the fridge—most importantly, one that had access to electricity. After months of searching, the fridge found a home next to The Number, a local graphic design company.

Community Food Support raised funds to build and stock the fridge and pantry, and many of the building materials were donated by Cook Street Castle Building Centre.

The fridge officially launches on Saturday, when volunteers will be hosting a food drive from 10 am to 5 pm. Donations of fresh food, hygiene products, and dairy products are encouraged. Community Food Support outlines the type of food they can’t accept, such as opened or premade, on their website, along with ways to get involved.

To support the project, several local businesses—including Philips Brewing, the Zero Waste Emporium, and Nezza Naturals—donated products that will be raffled off to supporters of the free fridge during the next few weeks. To enter the raffle, Community Food Support asks locals to take a photo of themselves with the fridge and tag @communityfoodsupportvictoria and @communityfridgevictoria on Instagram.

Through efforts like this, and normalizing the fridge as a service for everyone, volunteers hope to reduce the stigma around accessing food support programs. In the future, Athena says, she would love to see other neighbourhoods such as North Park, Quadra Village, and those by the University of Victoria come together to create their own community fridges.

So far, Victoria’s first free fridge has received an outpouring of support. The shelves were quickly stocked with fresh vegetables, dry goods, and even donuts and other baked goods.

“We are just working to get word out that the resource is here for people to use and contribute to. It really is dependent on [the] community taking ownership of the fridge, but I’m really excited to see it set up,” said Adamson.

“It’s been a long time coming, so it’s good to see it running.”

It takes a village to build a village: prototype Conestoga hut created to model new option for safe sheltering in Victoria
Capital Daily readers help raise more than $170,000 for Victoria’s neediest families
This year in good news: looking back on the impact of our readers
Wishing you a free Christmas: locals create free boutique for low-income community members
Meet Maynard Johnny Jr., the artist behind the BC Ferries’ new Salish Heron
'We see people light up': Truck Light Convoy and Food Drive to illuminate Greater Victoria streets for the 23rd year 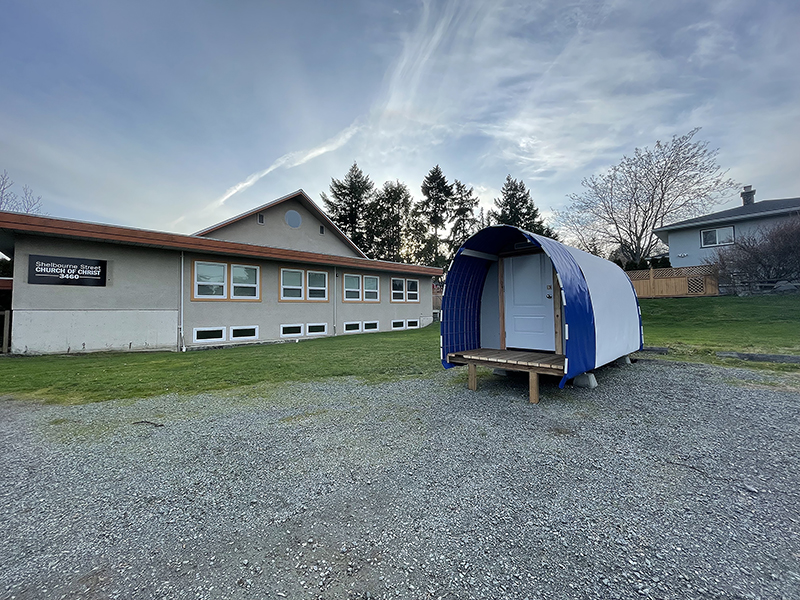 This year in good news: looking back on the impact of our readers
A book's popularity surged, a barbershop saw unsolicited gifts, a fundraiser raised $30k and much more, thanks to Good Newsletter readers
Have a tip?
Use our confidential inbox