April 8, 2020
Get the news and events in Victoria, in your inbox every morning.
Thank you! Your submission has been received!
Oops! Something went wrong while submitting the form. 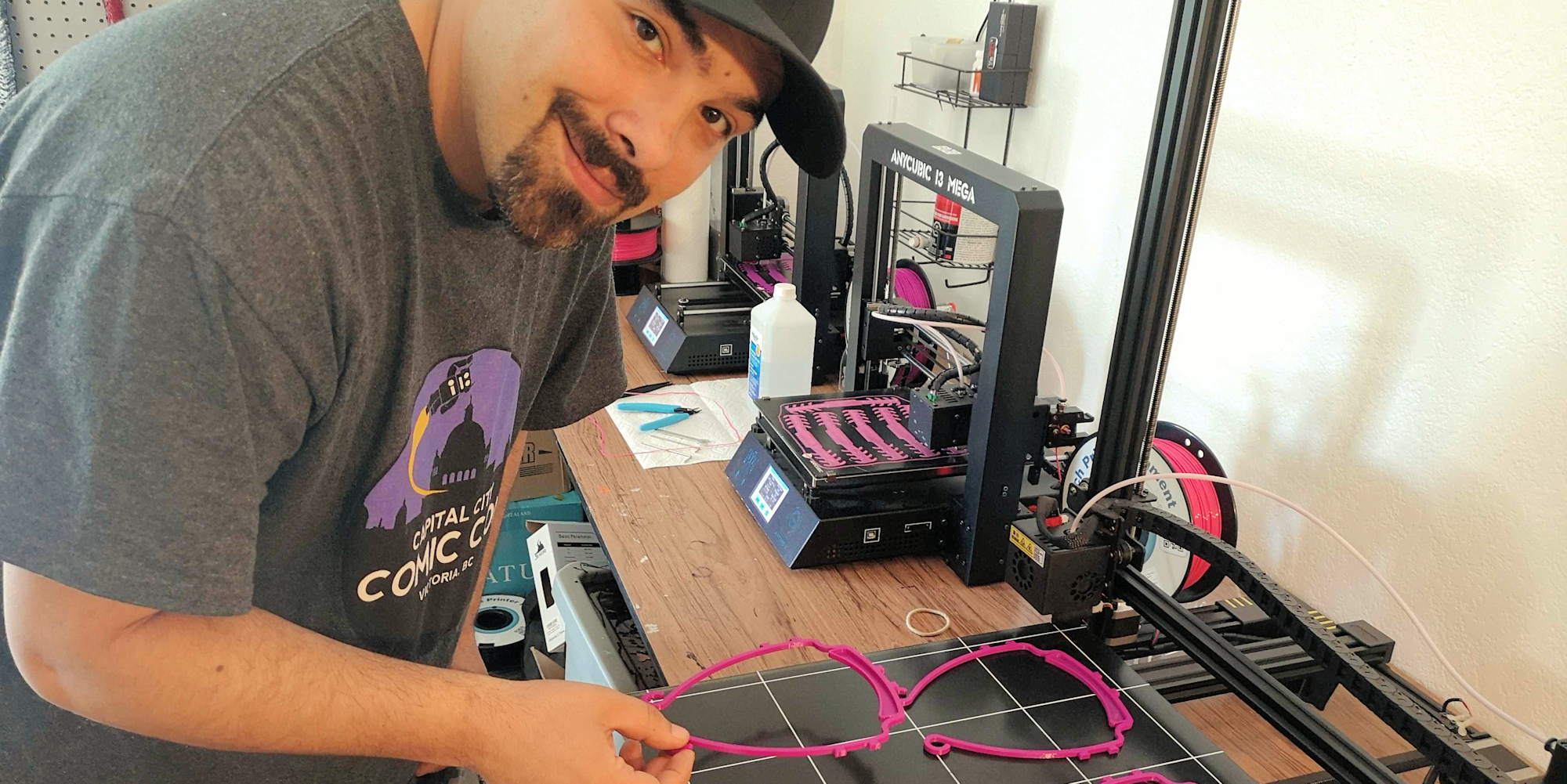 With Vancouver Island facing the same critical shortage of medical face shields as everywhere else in Canada, an unlikely volunteer coalition has formed to top up supplies using a network of home 3D printers.

With about 15 members operating printers and a dozen or so more volunteers helping with procurement and delivery, as of Tuesday the Island chapter of the BC COVID-19 3D Printing Group had fulfilled requests for over 1,300 face shield headbands, plastic face shields, and mask ear relief clips.

“I think they're probably better than the ones they're giving to the BC Ambulances Services,” said Tyson Walters, a protection services officer at Island Health. “Those are awful."

Walters requested and received 250 mask ear clips, 70 plastic face shields and 50 face shield headbands that he distributed in Duncan. "The staff that I've interacted with that have used them are pretty happy,” he added, noting they are particularly useful for ICU, blood test and electrocardiogram staff who interact closely with patients.

One of the group is mechanical engineer Simon Park, who interned on the fuel cells team at Mercedes-Benz, on the energy products team at the electric car maker Tesla, and last year — months before he graduated from the University of Victoria — won a $15,000 innovation prize for inventing a battery powered bicycle trailer.

Another is costume designer Kelly Burns and his family won their category in an online cosplay contest held by Victoria’s Capital City Comic Con for their impeccable take on DC Comics’ flagship supervillain team, the Legion of Doom.

“Yep, I'm normally a cosplayer and I make costumes and props,” said Burns, in a telephone interview, as he managed three machines making protective face shields and mask straps. “But then I was watching Youtube videos from the 3D Printing Nerd and he was making these.”

Already quarantined at home due to public health orders, Burns recently started printing personal protective equipment (PPE), hoping to give it away to health care professionals who need it.

Their face shields are not approved by Health Canada, the group notes, but utilize widely available templates and are intended to meet an urgent need — last week, federal Health Minister Patty Hadju said it’s unlikely that Canada stockpiled enough PPE in advance of the coronavirus pandemic and World Health Organization officials have expressed concern health workers could be put in danger by shortages.

Requests for the 3D printed personal protective equipment — which have come from local hospitals, doctor's offices, dental clinics, midwives and charities who deal with at-risk communities — are arriving at a breakneck pace. Any new requests are made through a simple form on the group’s website. A volunteer then follows up to confirm the requestor’s identity is authentic.

Anyone with a 3D printer can also sign up to volunteer, as can anyone who wants to help out with delivery or donate materials (if you have copier transparency film, it’s much needed).

While Vancouver-based design firm LNG Studios is leading the BC COVID-19 3D Printing Group efforts as a partner on the mainland, the Vancouver Island chapter has evolved as people have joined.

“As a major in engineering, and having experience with 3D printers, I was quite skeptical," said Park, of his initial reaction to the group. "What really changed things for me was realizing that there are supply chains in place for a lot of major hospitals, but some smaller contractors and clinics have to buy PPE the same way that everyone else does.”

He is now one of the Island chapter’s lead coordinators, fielding requests and organizing the printing capacity in the Victoria area.

"We try our best to triage and see what the facility that's requesting PPE is, how urgent their need is, and then to fulfill them we have a whole network of volunteer printers that are printing 24/7 right now,” Park said.

Burns, meanwhile, has emerged as a star printer.

“He has donated his time, several hundred dollars in filament, even going out of his way to purchase special colours just to put a smile to the recipients' faces,” said Jason Murray, another of the lead coordinators of the Island group. “He has also purchased additional printers specifically for this effort.”

Burns confirmed that he has been burning the candle at both ends. He said he has been going to bed around three in the morning, and waking up at six or seven, routinely putting in nineteen hour days.