Cab drivers wait for fares outside the Victoria International Airport on March 18, the first day of mandatory closure for BC's bars and pubs (James MacDonald for The Capital)

Capital Daily is part of the Trust Project
latestCOVID
TransportationBusiness
HousingGood News
Cab drivers wait for fares outside the Victoria International Airport on March 18, the first day of mandatory closure for BC's bars and pubs (James MacDonald for The Capital)

March 23, 2020
Get the news and events in Victoria, in your inbox every morning.
Thank you! Your submission has been received!
Oops! Something went wrong while submitting the form. 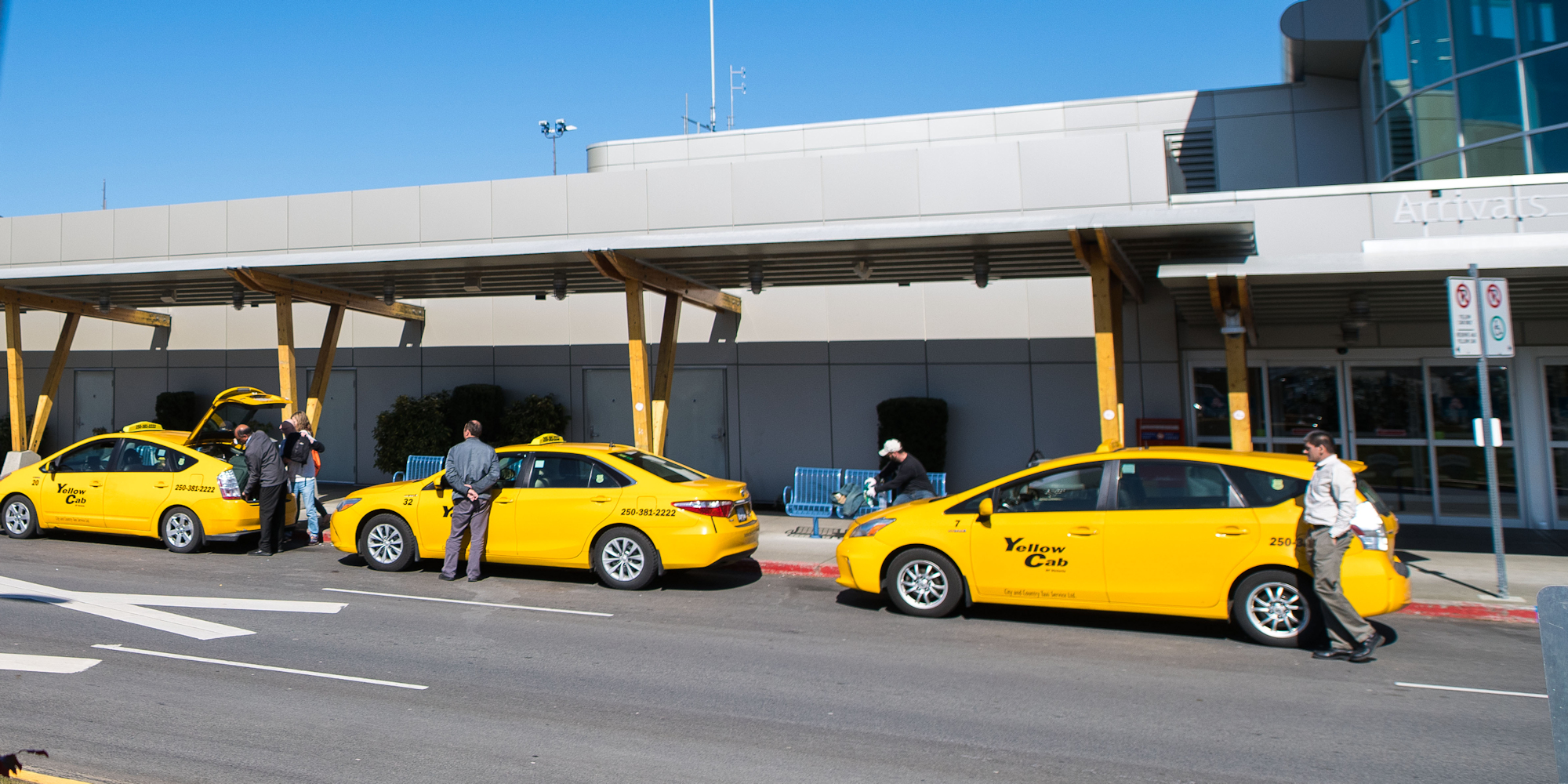 Cab drivers wait for fares outside the Victoria International Airport on March 18, the first day of mandatory closure for BC's bars and pubs (James MacDonald for The Capital)

Last Tuesday, an Esquimalt man who owns a small flooring installation business had an unexpected day off: His customer cancelled after testing  positive for COVID-19.

The installer and his crew went out on a job the following day with a deeper awareness that the work they do—entering people’s homes to tear up floors and lay down new ones—could be risky in a pandemic. When their customer opened the door, the crew hung back to ask some basic but important questions: Is anyone in the house sick, does anyone have a cough, has anyone left the country lately?

“Well, my two year old has had the flu, but that’s no problem—come on in,” the installer, who asked to remain anonymous, recalls the customer  saying. “And I’m like, ‘Hold on a second, he’s got the flu?’ And she’s like, ‘Yeah, but it’s not corona, it’s just the flu, so don’t worry about it.’ And she keeps pointing with her foot at where we need to fix the floor. She was super persistent about getting us into the house.”

The installer persuaded the customer to reschedule, but it took some doing. “People still have a sense of urgency when it comes to their floor,” he said. “We’re booked through the end of April, and we’ve had only one client call us and reschedule.”

Aross the world, the novel coronavirus pandemic has forced people out of their routines. Government officials have closed borders and, in certain regions, issued shelter-in-place orders. Schools and universities, movie theaters, hair salons, gyms, bars, nightclubs have shut down. In hard-hit Italy, where 4,800 have died, even funerals have been cancelled. In some U.S. cities and states, non-essential workers have been urged—and, in some places, ordered—to work from home or stop working. Temporary foreign workers entering Canada, and citizens returning home, are required to self-isolate for 14 days.

In BC, with 424 confirmed cases and 10 deaths as of Sunday, provincial health officer Bonnie Henry has declared a public health emergency. She has closed all bars and pubs in the province, required restaurants to switch to take-out and delivery service, prohibited gatherings of more than 50 people for conferences, religious or entertainment purposes, and higher education, and closed “personal service establishments,” such as tattoo and massage parlours, barbershops, and nail salons.

Because asymptomatic people can still spread the virus, social distancing undoubtedly will save lives. Public health officials say it’s currently the best defence we have against the spread of COVID-19. The message from the federal and provincial governments has been consistent and delivered with a sense of urgency: to slow the spread of the coronavirus, people must immediately change their behaviour—and in ways that will greatly inconvenience them. And in case anyone on Vancouver Island is confused about what social distancing actually means or why it’s important, a family physician group in Comox Valley released a statement to the public last week, attempting to make it personal: “It requires YOU and everyone to aggressively limit unnecessary direct contact you have with other people.”

While the provincial government has taken steps to drastically limit social contact, it has yet to halt non-essential work or require non-essential workers to work from home, leaving some to make decisions that pit their own financial security against the good of the public.

“I find myself in a frustrating situation,” a housekeeper wrote on a Victoria subreddit last week. “I work for a cleaning company that refuses to close. We have 4 teams of 3 people going into about 5 homes a day. That’s a lot of people going from home to home to home. We carry the same equipment into each home. We haven’t been spoken to about how to protect ourselves or our clients. I’m very scared of infecting people but I need the money to pay my bills.”

When a commenter thanked the housekeeper for keeping “those frequently touched surfaces clean,” the housekeeper replied, “We are very grateful to help those who can’t help themselves or keep their homes clean, but it disheartening to walk into well off homes with families in isolation who can’t be bothered to Lysol their own light switches.”

The flooring installer describes having a “weight resting on my shoulders” as he considers what shutting down his business would mean for both his employees and the public good. He says he personally would prefer to stop working, for his own family’s protection—he has a newborn—and so as not to unwittingly spread COVID-19. But without a mandate from the government, he says small businesses like his are in a terrible bind.

Most of his work comes from large stores, like Hourigan’s Flooring and End of the Roll, which sell flooring to customers and then contract out the installation work. His crew is one of many these suppliers hire. If he stopped accepting work, the work would still get done—just by other crews. If he goes on hiatus and his competitors don’t, would his business go under? Would suppliers still send him jobs in the future? Would his employees jump to other crews? “We risk losing everything we’ve worked for,” he said.

Hourigan’s Flooring posted a notice last week asking its customers to maintain a social distance of six feet or more and not to handle samples. Some of its employees are now working from home. In a social media post the store claimed to be “diligent in disinfecting.”

Despite efforts like these, the installer says most of the suppliers he works with are still booking jobs and sending workers into people's homes.

The installer says he’s discussed the possibility of layoffs with his crew. “I have guys who have a lot of bills to pay, some own houses, and they definitely rely on the money that we’re paying them.” As long as there’s work, he said, “All the boys are willing to risk potentially getting this virus and potentially spreading the virus just to make ends meet on their own turfs.”

That’s why he thinks the government should step in: “If you don’t make it illegal, then people are still going to do it.”

And are his customers worried about the possibility of his crew bringing the virus into their homes? “I don’t think they’re getting that at all,” he said.