March 30, 2021
Get the news and events in Victoria, in your inbox every morning.
Thank you! Your submission has been received!
Oops! Something went wrong while submitting the form. 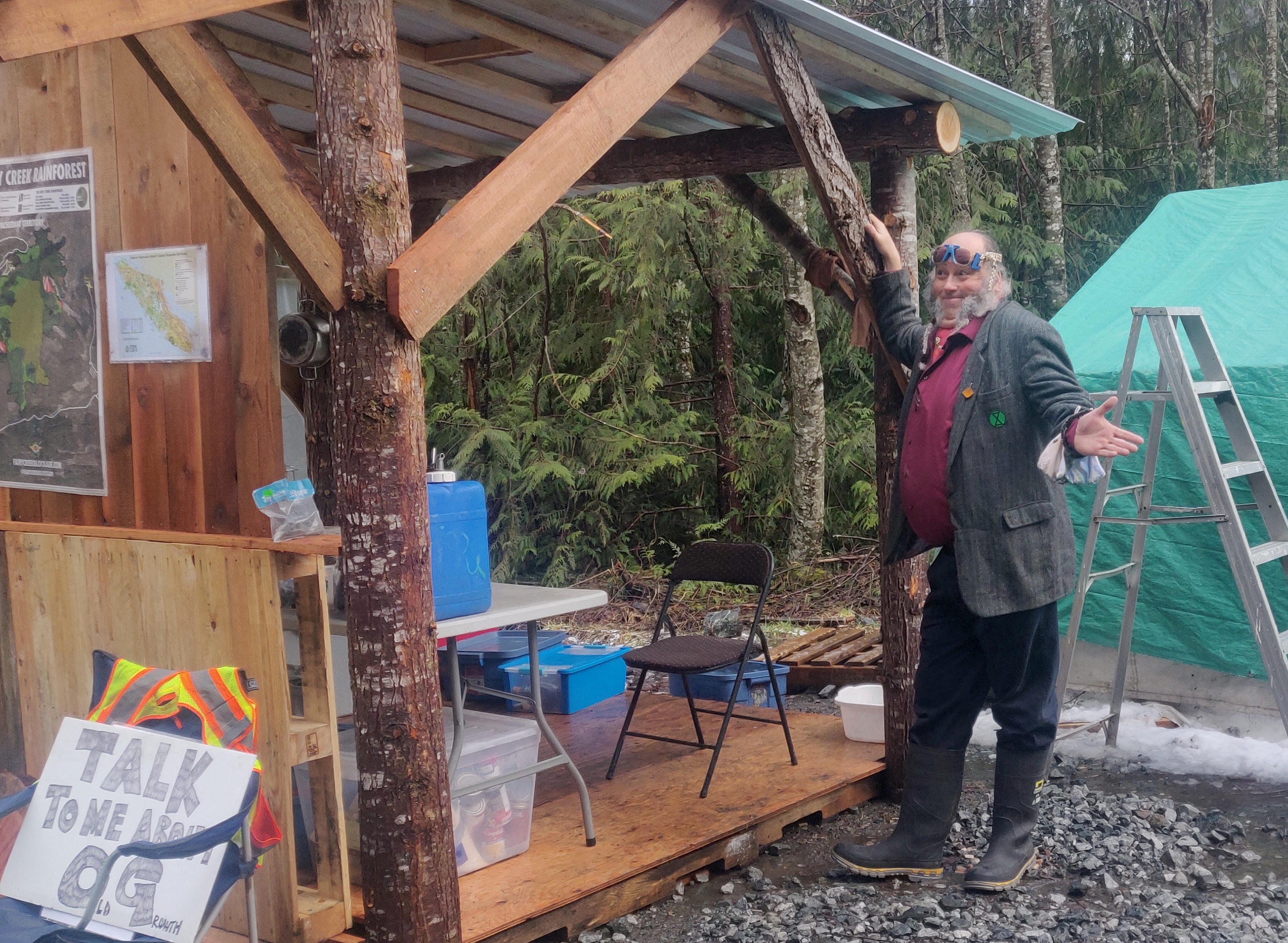 Captain Painfully Obvious drives his fully electric Hyundai Kona, dubbed the Obvious-Mobile 3.0, up a logging road north of Port Renfrew. This late-February morning is the fifth trip of what has become his weekly supply run to the forest protection blockades which have formed in protest of Teal-Jones Group’s plans to log the Fairy Creek watershed, much of which is old-growth forest. Many of these activists are organized under the name The Rainforest Flying Squad and have been blockading logging roads in the region for the past six months.

Today, the 59-year-old’s vehicle is full of clean drinking water, groceries, and bags for activists’ dirty clothes, which he returns, cleaned, the following week.

“The idea is that I’m making the run every week, and I’m making it with clockwork reliability—or as close as I can,” he says.

Though he has held various jobs during his life, Captain Painfully Obvious (whose real name is Doug Prentice) is currently a full-time activist. He isn’t ashamed to admit that he and his family are wealthy, as he puts much of his time and money towards humanitarian and environmental causes locally and internationally. Costs for food, water, laundry, and anything else the campers need are covered by Prentice himself. He doesn’t see why the campers should spend their own money when he has the means to cover the costs. “With great power comes great responsibility,” he says, quoting Spiderman’s uncle Ben.

“My 60th birthday is coming this summer. The single biggest thing that worries me, is what kind of state the planet is going to be in after I’ve passed on and I’m no longer here to defend it.”

Activism runs in the family

While walking in Fernwood, Prentice’s house is hard to miss. The fence is covered in signs bearing slogans such as “We build the future we want… or we don’t… either way… we get the future we deserve!” and “Please remember Standing Rock.” Past the fence, his deck is host to a massive book exchange he built last spring in response to the closure of bookstores and libraries. Adorning everything in sight are circular green stickers with an hourglass-shaped symbol, the logo of the Extinction Rebellion movement, an environmental activist organization of which he is an active member of the Victoria chapter. The driveway is occupied by the Obvious-Mobile 1.0, a bike-towed trailer which is also covered in logos and slogans, as well as the recent addition of the Hyundai Kona, aka The Obvious-Mobile 3.0 (a sticker on the rear reads, “Look ma, no tailpipe!”).

Prentice was born in Toronto and credits his parents with his passion for activism. He fondly recalls being taken to his first political demonstration by his father, an anti-Vietnam war march in Paris, at the age of 10 years old.

“They set a standard that I’m having a damn hard time living up to,” he says. “But what can you do? You can only do your best.”

Growing up, both his parents spent time as professors at the University of Toronto, where his mother, Alison Prentice, was the founder and first director of the Centre for Women’s Studies in Education. Her work was a driving force in the study of Canadian women’s history, and she later became a member of the Royal Society of Canada, as well as the Order of Canada. She now lives in an assisted living facility, but Prentice says his mother still has an impressive book collection.

“At the moment, she’s got a two-bedroom apartment. One bedroom of which she sleeps in, and the other bedroom is a home office which she still uses at the age of 86,” he says. “So, you know, I admire my Mom. She’s lost a little of her fine mental edge to Parkinson’s, and just age, but she still—at 80% of her peak intelligence and competence—is more intelligent and competent than I am.”

After his parents moved to Victoria in the ’90s, Prentice decided to follow them to the West Coast with his second wife and two kids. Prentice had developed a love for sailing in his early teens, and rather than simply moving to Victoria, he chose to sail there. He set off from Toronto in 1996 with his family on what was to be a five-year sailing trip across the globe. This included finding themselves caught in two active war zones. He hopes to one day write a book about the journey, titled The Wrong Place At The Wrong Time: Four Idiots Go Around The World. At the conclusion of the trip in 2001, Prentice and his family moved into a house in Shawnigan Lake. He and his second wife later divorced, and he moved to Victoria in 2015.

It was after moving to Fernwood that Prentice became involved with the Extinction Rebellion Movement and even started his own organization: the No Shit, Sherlock! Political Action Committee.

“I started that when I came to the realization that everything I do in terms of political action is a matter of ‘No shit, Sherlock!’ It’s basically an invention in my own head, which I have offered to other people as a means of structuring their interests in various issues.

“It’s a committee that has no meetings, and keeps no membership lists,” Prentice explains. “They can wear their membership in the committee openly by calling themselves a member of the committee and adopting a nom de guerre, like my ‘Captain Painfully Obvious.’ Or they can operate covertly and carry the NSSPAC in their hearts and simply do what the committee does, without identifying it as the committee's work.”

However, these environmental efforts are comparable to throwing a Hail Mary pass in the dying seconds of a losing football game, according to Prentice. “It’s thrown in desperation at the last moment of the game, and maybe it generates a win. Usually, it only generates a very slight win. So, we are going to suffer. Probably hugely, before we come out the other side.”

Though it’s an electric SUV, the Obvious-Mobile 3.0 climbs up the snow-covered logging road with ease as it pulls into the first blockade site of his run: the Eden Grove Protection Camp. Past a sign reading, “old growth: 2.7% left, 97.3% gone,” several tents, makeshift buildings, and vehicles are situated, forming the camp. Prentice unloads supplies from his car as he chats with the activists, taking out a pen and paper and creating a shopping list of specific groceries and any various supplies that they need.

While the activists are preventing logging companies and road building contractors from accessing the area, they encourage other people to come visit to see what’s at risk. The area often attracts visitors looking to take in the views of the old-growth forest, and to visit Big Lonely Doug. All that stands in the way of permanent change to the area, in their view, is this group of loosely organized volunteers, all contributing whatever they can. “That’s why we appreciate people like Captain Painfully Obvious coming out here every week,” one activist says. “It’s great to have good food out here to be eating.”

“It’s awesome that Doug is coming out here committing to a regular schedule of deliveries,” says another one of the volunteers. “Seeing as this is just a totally activist-run, volunteer-run thing… to have that consistency is really good support. He seems to really just want to do what he can, y’know? And he’s doing what he can. We’re all doing what we can.”

The Obvious-Mobile 3.0 pulls up to the Fairy Creek Blockade. Prentice unloads groceries, water, and laundry bags, and speaks with the campers as he creates a shopping list to bring for the next week—which was also potentially injunction day for the activists.

The Teal-Jones forestry company filed an application to remove the blockades, which went to court on March 4. The judge granted an adjournment until March 26, allowing more time for the activists’ lawyers to prepare their defence. A decision on the injunction application has been delayed until April 1.

As Prentice sees it, the environmental crisis is like the Titanic disaster. “Basically, we’re steaming at 20 knots through fog in iceberg country,” he explains while driving back to Victoria as the day winds to an end. “But have we hit the iceberg yet? Have we already done more damage than we can possibly undo? I don’t know. Nobody knows.”