February 14, 2021
Get the news and events in Victoria, in your inbox every morning.
Thank you! Your submission has been received!
Oops! Something went wrong while submitting the form. 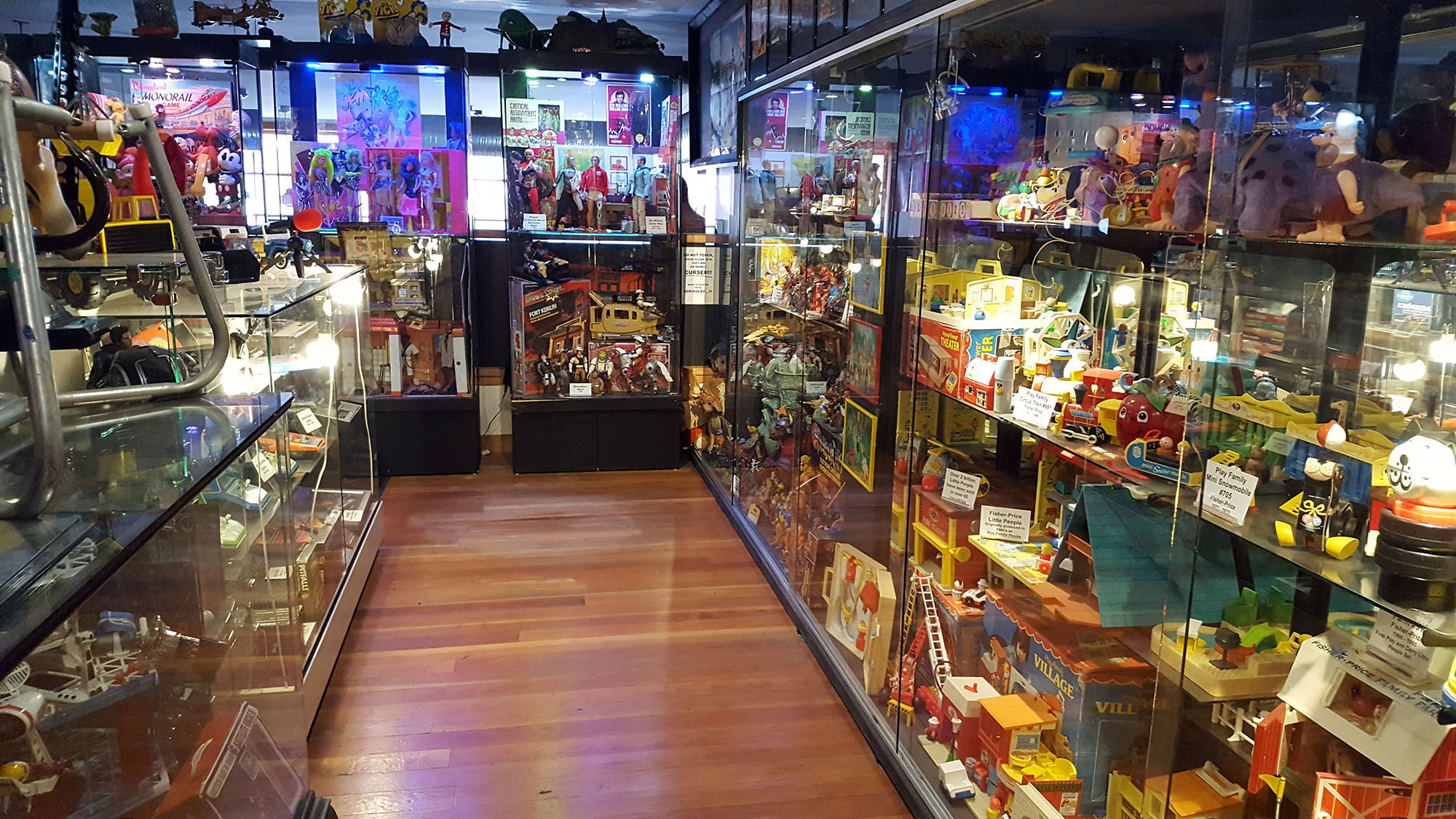 On the second floor of an old, red brick building on Broad Street resides the National Toy Museum of Canada.

Most of the toys in the great glass display cases are decades old, and all have been meticulously cared for. The cases are bathed in a soft yellow glow—special lights chosen so as to not be too harsh on the plastic items on display. Well, save for the Jem and the Holograms case, where the ’80s-tastic rockstar dolls are arranged on a multicoloured stage.

Not all the toys are plastic. Among the LEGO sets and He-Man figures are also Meccano sets, some nearly a century old, and even odd-ball items including a teddy bear with a realistic-looking Pierre Trudeau face.

It is a cloudy morning outside, but time seems to have not only stopped inside the small museum, but perhaps moved back a few decades. A stack of Atari 2600 games and a light green pipe with characters from Super Mario Bros. running alongside it seems to suggest some time around the mid-1980s.

The museum itself is quiet and still, save for the sounds of an employee preparing to open up the toy store downstairs. It is an inverse of the usual museum setup, with Cherry Bomb Toys downstairs taking up a larger space than the museum upstairs. This museum and shop—both homes of toys old, new, weird, and retro—would have been impossible without the work of its founder and co-owner, B. Woodward.

“The toy store is nearly 18 years old,” Woodward says, his dark eyes lighting up in a way that conveys his enthusiasm even with his mask on. “Our first five years [were] in a location that was overall smaller than the museum we’re in right now, but after we hit that five-year mark, we decided it was time to grow and be closer to our fellow shops.”

Downtown Victoria is a hot spot for nerdom and fans of pop culture. Next door to Cherry Bomb Toys is an old-fashioned video store. Across the street are several comic book stores and a Games Workshop, too—the latter of which specializes in tabletop games such as Warhammer 40,000. There is even a retro video game store about a block away: Fan Favourites Games and Movies.

The growth in popular nerd culture in Victoria is very evident in this section of the city. For example, part of Fort Street used to be lined with antique shops and consignment shops—an area known as Antique’s Row. In their places, a variety of restaurants, comic shops, and collectible stores have sprouted. Perhaps this is a sign of younger generations’ fascination with pop culture and collectibles—a phenomenon which is chronicled in documentary series such as The Toys That Made Us.

Within Victoria, Woodward notes that this shift has only seemed to take hold in the past decade or so. Regardless, the heart of downtown is the perfect place for a store and museum like Woodward’s to be. “I like to call the area Nerdvana,” he says.

Woodward does not run the store and museum alone. Along with several employees, he co-owns Cherry Bomb with his wife, children’s book author Candice Woodward.

There is also the store mascot, Ralph: a gruff, brown, Muppet-esque creature who appears both in the shop and on its social media outlets. As for how he got there, nobody at Cherry Bomb is sure. Though, as the Cherry Bomb building is over a century old, Woodward does not rule out the possibility of it being haunted. “He’s just one of the toys that came to life,” Woodward says.

The museum began over four years ago, back when Woodward decided to properly put the second floor of his shop to use. Until that point, it was just serving as a storage space.

“We wanted to add something that was family oriented to the area, and we already had the space,” Woodward says. “Sometimes as well, we’d just see people bring certain toys into the shop that’d make us go, ‘We have to share this! This is amazing! People have to see how cool this is!’”

The museum means so much more to him, though. At several points in our interview, Woodward mentions wanting to embrace a sense of nostalgia, preserve the toys he grew up with, and have people of all ages embrace their love of play. And now, the museum has become a one-of-a-kind attraction, not just in Victoria, but in the entirety of Western Canada, too.

But the store and museum’s scope goes beyond just toys. Among the National Toy Museum’s collection is an original Star Trek script, animation cells from Thundercats, and even a few toy prototypes.

“I love the history and I love the stories that go with them,” Woodward says, before motioning towards a glass case filled with video game items from the early 1980s. In particular, he points out mini playable tabletop arcade machines from Coleco, with the machines featuring versions of games such as Ms. Pac-Man and Frogger. “Like, that’s an interesting story there: Coleco—The Connecticut Leather Company. How does that end up having anything to do with electronics?”

Midway through our interview, Woodward is interrupted by the store phone ringing downstairs. It is a man wanting to bring in a particularly odd item to the shop: a fridge shaped and painted like R2D2 from Star Wars. Odd, yes, but also an item that feels right at home at Cherry Bomb.

Woodward’s work is not just limited to the toy store and museum, either. He is one of the minds behind Capital City Comic Con and Victoria’s Ultimate Hobby and Toy Fair—events that were annual and twice yearly, respectively, until the coronavirus pandemic. He also helps put on a yearly nerd-centric craft show called The Nerdy Days of Christmas each December—also on hiatus due to the ongoing pandemic.

Still, things are looking up for Cherry Bomb Toys, the Toy Museum, and Woodward. The store and museum have been featured several times across a variety of YouTube channels and were even the focus of an episode of the documentary series A Toy Store Near You—a series from the minds behind The Toys That Made Us.

Woodward very clearly loves what he does, too. When asked about particular items within the museum collection, he becomes particularly animated, excited to share his passion. “You just find all these crazy things with toys,” he says.

Above all else, Cherry Bomb Toys and The National Toy Museum of Canada is just a fun place to be. There are pinball machines and Cabbage Patch Kids, video game consoles and Godzilla figures, and toy aesthetics ranging from the pastels of retro My Little Pony to the ruggedness of vintage G.I. Joe. Indeed, the end of our interview is signalled by the sound of something large being rolled through the front door downstairs: the fridge shaped like R2D2.

Cherry Bomb Toys is located at 1410 Broad St. in downtown Victoria, and is open from 12 to 5pm Tuesday through Sunday. The National Toy Museum of Canada upstairs is currently closed to the public, as it has been throughout the duration of the coronavirus pandemic. When it is open, though, entry is by donation. Woodward hopes to have the museum open again to the public by June.