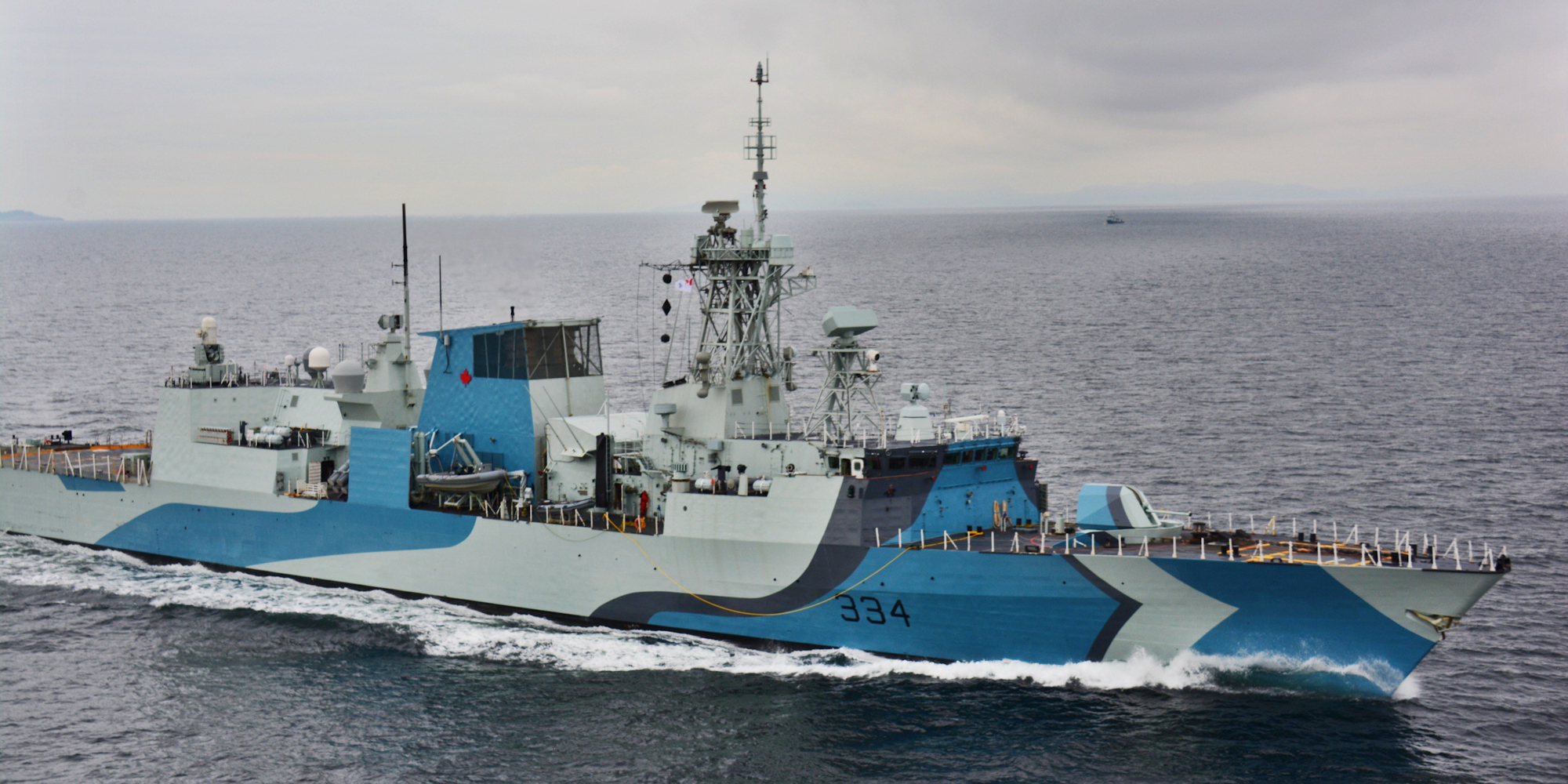 HMCS Regina photographed in October in its Second World War-era "dazzle" paint scheme, intended to commemorate the 75th Anniversary of the Battle of the Atlantic (Source: Canadian Forces Maritime Experimental and Test Ranges)

After navy brass expressed concerns with COVID-19 risks aboard ship, the frigate HMCS Regina is now in quarantine at CFB Esquimalt only days after it had set sail for exercises in the North Pacific.

The Regina left port on Saturday with an estimated 225 sailors aboard. It was one of two vessels to leave CFB Esquimalt last week – the other being the coastal defence vessel HMCS Brandon – in order to conduct readiness exercises with HMCS Calgary, which is already at sea.

The day before the Regina left port, however, one of the vessel’s crew reported to the CFB Esquimalt sick bay and said that one of their close relatives had potentially come into contact with someone confirmed as a carrier of COVID-19.

That sailor was then held in isolation to await testing as Regina was deployed on schedule.

“While awaiting test results, the chain of command directed that HMCS Regina, which had sailed on March 21 as scheduled, return alongside in CFB Esquimalt on March 23, in lieu of a scheduled fuel stop,” wrote the Department of National Defence in a Tuesday statement to The Capital.

The isolated crew member would end up testing negative, but sailors are not being allowed to leave the Regina lest they contract the virus in Victoria. As the navy put it, “to maintain all future options, the crew remained onboard to limit the potential of community exposure.”

Before deployment, HMCS Regina crew members were screened for COVID-19 using a “a review of recent travel history, a check for symptoms associated with COVID-19 and a review of any potential known contacts with COVID-19,” according to a statement by the Department of National Defence.

However, as The Capital reported last week, these measures would have been wholly inadequate to detect any sailor potentially carrying the virus. For at least the last two weeks, COVID-19 has been spreading freely through the Greater Victoria area, potentially exposing any number of people who have no recent travel history or any knowledge of coming into a contact with a carrier of COVID-19.

What’s more, COVID-19 does not always result in symptoms. This is one of the primary reasons the virus has been so destructive; thousands of people around the world have been unknowingly infecting others without any indication that they are a carrier.

Given the Royal Canadian Navy’s limited procedures for COVID-19 screening, it’s entirely possible they could have unknowingly boarded an asymptomatic patient who had contracted the virus without leaving Greater Victoria.

Last week, COVID-19 concerns caused the Royal Canadian Navy to recall a total of four vessels deployed overseas, including the CFB Esquimalt warships HMCS Nanaimo and HMCS Whitehorse, which were engaged in anti-smuggling patrols in the Caribbean.

However, Regina, Brandon and Calgary remained exempt from the recalls due to the navy’s need to retain a contingent of “ready duty” ships able to set sail in an emergency. As pandemic conditions worsen across Canada, the military may eventually be called upon to provide assistance.

“Senior leadership remains committed to balancing the requirement to complete critical tasks and high readiness training in support of planned operations while coordinating with health care professionals the requirement to enforce health protection measures for our sailors,” a military spokesperson told The Capital.

As of March 20, the Canadian Armed Forces are no longer reporting the number of confirmed COVID-19 cases among their members.

“This is information we don’t want opposing forces to have as we’re relatively a small force,” Department of National Defence spokesman Dan Le Bouthillier told the Ottawa Citizen Friday.