The parking lot at Royal Athletic Park, less than a block from the arena, has been used as a temporary encampment for weeks. Photo: Katie Fillion (submitted)

Capital Daily is part of the Trust Project
latestCOVID
TransportationBusiness
HousingGood News
The parking lot at Royal Athletic Park, less than a block from the arena, has been used as a temporary encampment for weeks. Photo: Katie Fillion (submitted)

January 28, 2021
Get the news and events in Victoria, in your inbox every morning.
Thank you! Your submission has been received!
Oops! Something went wrong while submitting the form. 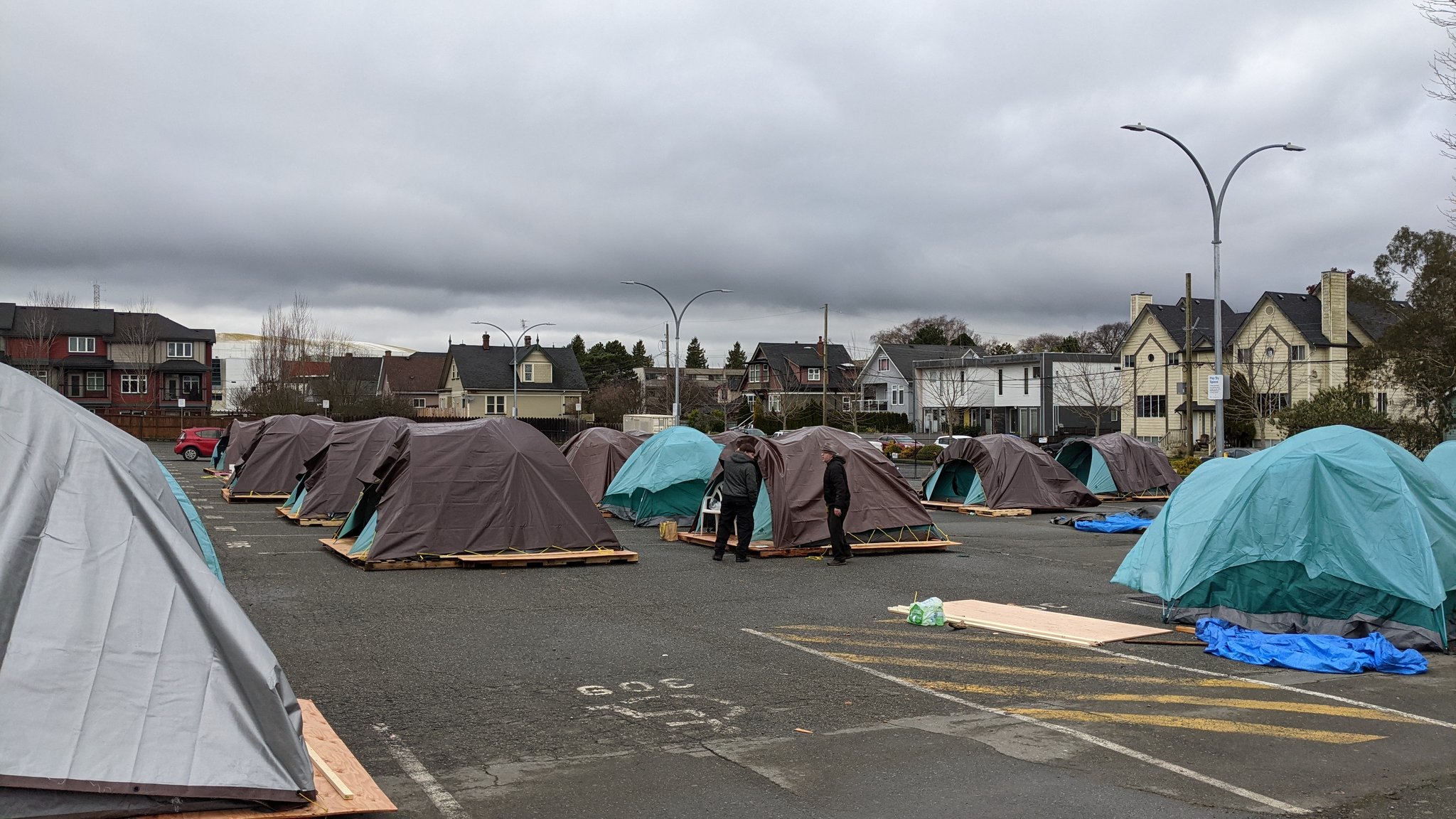 The parking lot at Royal Athletic Park, less than a block from the arena, has been used as a temporary encampment for weeks. Photo: Katie Fillion (submitted)

After more than a month of advocates calling for this very move, the BC government announced this week that they will again be leasing the Save-On-Foods Memorial Centre (SOFMC) on Blanshard Street to temporarily house members of Victoria’s unsheltered population.

Through BC Housing, the province has signed a lease with the operator, GSL group, from Feb. 1 to May 30, with an option to extend it.

The plan is to temporarily house 45 people at the arena, providing them with wraparound supports including meals, washroom facilities, addiction treatment, and harm reduction, before more permanent housing options are secured.

But some say the measure is not enough, and is still taking too long to implement.

The announcement to reopen the SOFMC was made just days after the suspected overdose death of a man who was sheltering at nearby Royal Athletic Park. Calls for the arena to be used as a transitional indoor housing facility, where necessary supports would be available to people, began last year.

After the disastrous flooding at Central Park in December that left campers drenched and cold, the North Park Neighbourhood Association (NPNA) penned an open letter to BC Housing and various politicians urging them to reopen the arena as quickly as possible.

Even though the lease agreement between the province and GSL group begins in February, people will not be able to start moving into the SOFMC until March.

“Obviously, we would like this to happen as quickly as possible. We've been requesting this for some time already. I would love it to be tomorrow,” said Sarah Murray, Executive Director of the NPNA, in an interview with Capital Daily.

“But I also understand that they need to get their staffing in place, and they need to have time to bring the pods back and make it a livable space for everyone.”

According to BC Housing Regional Director, Heidi Hartman, the delay between when the lease begins and when people can start to move in can be owed to hockey.

“There was a lot of work behind the scenes and so much was dependent on the Public Health Order and whether the WHL would be able to resume,” she said in an interview with Capital Daily.

“[The SOFMC was] originally closed in September because it was anticipated that the hockey season would resume. Once we got confirmation that that wouldn’t happen, we reached out to GSL.”

For people living outdoors through the coldest months of the year, the technical difficulties are more difficult to swallow.

“I think there's definitely a lot of irony to the fact that people will be outside all winter and then finally [be] inside when it starts to be spring,” said Shae Perkins, a former resident at the Beacon Hill Park encampment who is now housed and acts as an advocate for the community.

“It definitely hasn't happened soon enough ... Basically how it feels is that it took someone dying for them to actually get this together and get it going.”

Prioritization for who gets into the new shelter will be determined by BC Housing and Island Health based on a variety of factors.

RAP parking lot on this cold rainy night. The arena needs to be opened as emergency shelter. The wind was even worse than this earlier and I am worried about tents collapsing. These folks have been through so much already. @GraceALore @MurrayRankinNDP @jjhorgan #yyj pic.twitter.com/4H8FoJvRBd

Indigenous people, people experiencing long-term homelessness, people over the age of 55 and those who have pre-existing health conditions will be the first to get in.

But that list will be hard to whittle down as, according to Perkins, chronic health conditions like COPD, asthma and recurrent pneumonia run rampant among the city’s street populations.

“I'm very concerned about people living on the streets—not just dying of overdoses, but people who live on the streets die much younger than the housed population,” Victoria Mayor Lisa Helps told Capital Daily.

One study found that being homeless can decrease a person’s life expectancy by about 17.5 years.

“Everybody is working as hard as they can to meet that goal of moving everyone who's currently living in a park inside by the end of March,” Helps added.

‘A lot more people than they think’

The move to reopen the SOFMC as a transitional housing facility is largely seen as a positive step, both by politicians and by some advocates.

However the approach drew heavy criticism online after BC’s Attorney General, David Eby, shared an announcement about it on Twitter.

Much of the disapproval stems from the fact that one year into the pandemic, the province’s solution is still to pack dozens of people together inside an arena, rather than putting them up in longer term accommodations like hotel rooms and rentals.

But according to Hartman, the use of individual pods inside the arena was well received the last time the facility was used as a shelter.

“They were a respectful and dignified way to shelter folks in a big open area,” said Hartman.

“They create the opportunity for personal space for folks, and mean people aren’t sleeping on a mat on the floor. They’ve got their own locker, private area, and storage space too.”

Victoria council’s goal was to house every unsheltered person by March 31, but transitional shelters like the SOFMC are not what the city’s unsheltered population thought was meant by ‘housing’.

“That is definitely not housing,” Perkins said. “The city said that people will be housed by March 31. I think that cramming people into the arena is not exactly what people were expecting.”

They also believe the number of shelter and housing spaces currently available in Victoria is nowhere near enough.

While Beacon Hill Park and Royal Athletic Park are the most visible spaces where unsheltered people have been living, they’re not the only ones.

“There's a lot more people on the street than they think, and the amount of spaces they have so far nowhere near meets the need.”

As COVID-19 cases start to rise on Vancouver Island, spread of the virus is a serious concern in settings where many people are expected to cohabitate.

Precedent has already been set in BC for outbreaks occurring in congregate settings like the arena.

Ironically, that facility had been set up as a site where unsheltered people could self-isolate while experiencing symptoms of the virus or while waiting for their test results.

At the SOFMC, Hartman says staff members—employed by Portland Hotel Society—will have adequate PPE and help from Island Health to maintain safety standards during the pandemic.

According to Perkins, COVID-19 seems to not have affected Victoria’s street community in any major way thus far.

“Currently, folks are working their hardest to keep each other safe,” they said.