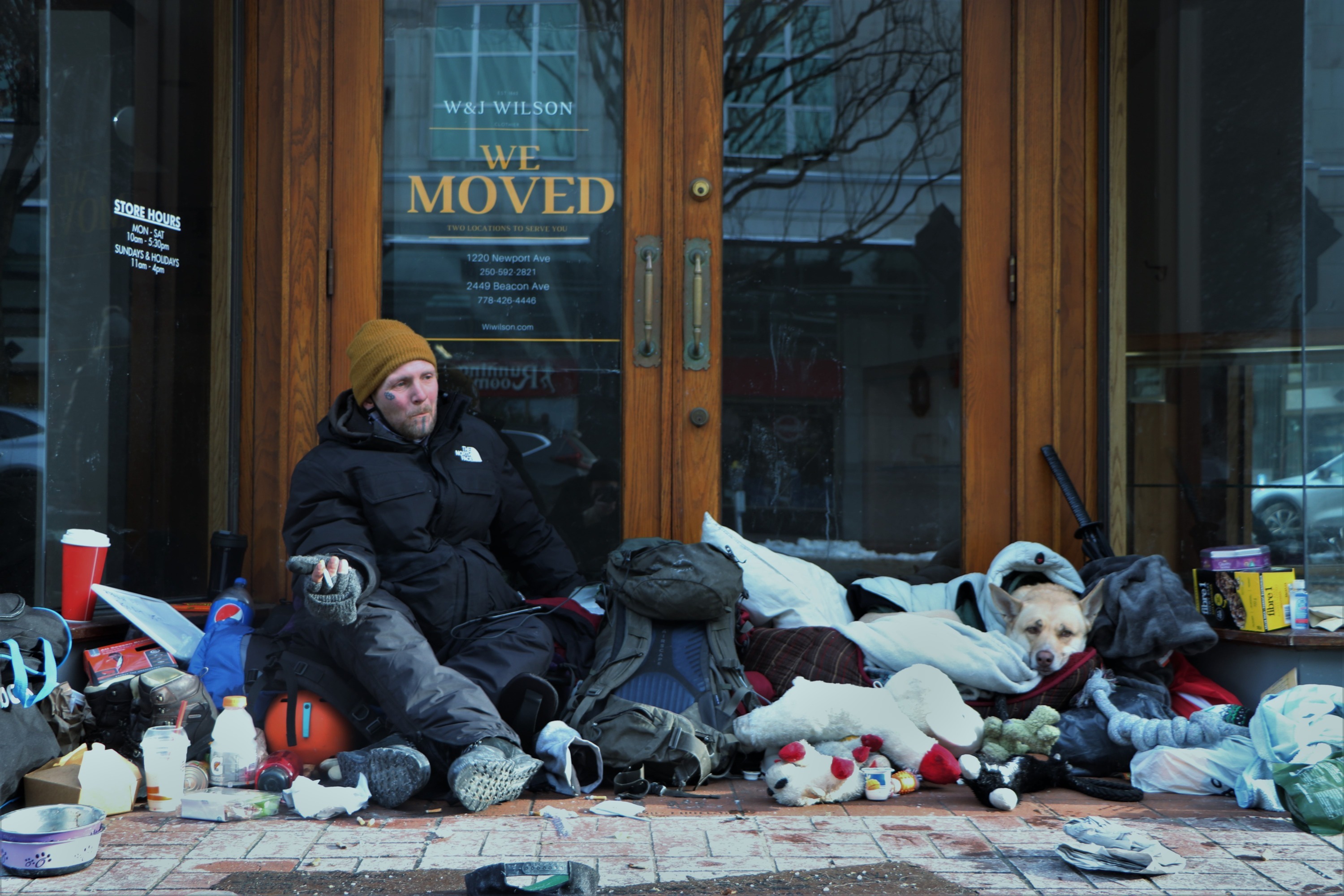 “I didn’t think I’d ever be deprived like this,” Alex says as people walk by on a snowy holiday Monday on Government Street.

“But someone bought me a new jacket, a scarf, some mittens, so I’ve got my own personal shelter on me,” he jokes.

As people pass us by, some offering to buy Alex food, he tells me he’s been unhoused for nine months. He’s unsure when he won’t be. “Before this, I worked for a living and I lived in houses for most of my adult life—15 years,” Alex says. “Now, I’m on every BC Housing list possible waiting for the chance to be housed.”

In the absence of a government-provided option, Alex has recently come across a new possibility: a fundraiser has raised enough to put him in a shelter of his own.

With temperatures dipping below freezing, for many people in his position, emergency shelters are the only way out of the cold.

This year, the Greater Victoria Coalition to End Homelessness (GVCEH) activated emergency weather response (EWR) shelters. They’ve been in effect since Friday, Dec. 24 and are only activated on the day of a weather event below 0 C—anything above and the EWR shelters don’t open.

This year, the Salvation Army is running an overnight EWR shelter on Johnson Street and two daytime warming centres are run by the City of Victoria—an improvement from last year.

Since Dec. 27, each night the Johnson Street shelter has filled up its 30 spaces and, in response, the City of Victoria opened their warming centre at James Bay United Church for overflow overnight use.

But Alex doesn’t access these shelters, and he voices an issue often overlooked. He’s got a lot of things with him, and a dog, Leeloo—both of which complicate using a shelter.

The EWR overnight shelter does not allow pets or shopping carts. Also, Alex says, shelters are a liability and an uncomfortable experience for him—he says he’s sure anyone could see why—and the potential for his stuff being stolen is a risk he’d rather avoid.

Alex’s situation points to a problem that EWR shelters aren’t answering at the moment, but it isn’t the only one.

In response to a lack of transportation during emergency weather events, the GVCEH says that a BC Transit safe bus was available to pick folks up at 919 Pandora Ave and drive them toEWR shelters on Johnson Street and James Bay United Church on Dec. 27.

The City of Victoria also recognized this barrier and in its emergency weather plan, the city grant Victoria police, under the Assistance to Shelter Act, the authority to assist a person who is homeless to a shelter during extreme weather events. Once in the shelter the person may choose whether or not they want to stay.

Alex tells Capital Daily that he has a good relationship with Victoria police and they’ve understood he prefers to be on the streets than shelters.

“I get along with the cops, big time,” Alex says. “And they were actually trying to help me get housing too.”

Among the barriers that Alex lists, another issue persists in sheltering: staff.

On Sunday, Dec. 26, Our Place Society closed its drop-in centre—which provides meals, lockers, and harm reduction supplies—three hours earlier than usual. Our Place Society told Capital Daily the closure was due to a staffing shortage.

‍While COVID-19 restrictions prevented EWR shelters from opening last winter, this year service providers tell Capital Daily that they didn’t have the staff to provide a space during emergency weather.

Dave MacMain, a community manager at Cool Aid, said BC Housing approached Cool Aid in fall to run an EWR. The organization had to decline.

“Even if we wanted to, we couldn’t start an EWR program,” Macmain says. “There just aren't enough people to operate it.”

Macmain added that they often turn away upwards of 10 people each night at temporary emergency shelters during extreme weather. This is a seasonal overnight program providing the unhoused a mat from 9 pm until 7 am. Pre-pandemic, Macmain says, the mat program sheltered almost double the 23 people it serves now.

On Dec. 22, at the prospect of this week’s extreme weather, the GVCEH posted job openings for a Casual Emergency Weather Protocol Support worker.

“People are falling through the cracks,” Macmain says, “There’s always a need for more services. Because there are always folks that don’t fit into shelters.”

And this is where Alex falls in.

Nina Grossman, communications coordinator for GVCEH told Capital Daily that EWR shelters are not meant as a service—they are strictly a response, and one that can only be activated the day of a cold snap, not before—a limitation set out in their BC Housing contract. “This program is a response to cold weather and unfortunately, the funding is delegated for that,” Grossman says.

Now, volunteer community members are active in trying to house people like Alex.‍

The Backpack Project—a local initiative providing mutual aid to the unhoused—often voices their displeasure for EWR service providers online. The organization’s criticisms tick many of the boxes into which Alex fits, and have pointed out barriers, like transportation, before many of the responsible parties acknowledged them.

“Emergency weather responses are never adequate. The community has come together a few times to run a shelter at James Bay United Church,” said a spokesperson for the The Backpack Project. “The community stepped up when the province let us down.”

Another community initiative hoping to fill in the cracks is the Community Alliance of Sheltering Alternatives (CASA), who has begun to fundraise for their own EWR shelters.

The CASA volunteer team is facilitating the installation of short-term sheltering solutions within Greater Victoria via a structure called a Conestoga Hut—named after wagons that carried pioneers, which the shelters closely resemble. A prototype was demonstrated on Salt Spring Island last summer.

The initiative is supported by volunteers such as Frontrunners Victoria and New Balance Victoria owner Rob Reid; Calen McNeil, co-owner of Zambri’s and Big Wheel Burger; and filmmaker Krista Loughton.

“Shelters are running at half capacity, so we’re in a mess,” Loughton says. “This happened last year too, so we’re trying to fill those gaps for people falling through the cracks.”

CASA is reaching out to private citizens, businesses, churches, and NGOs to see if they can provide sheltering alternatives for the unhoused. Their fundraising goal for one hut—to house Alex—was $4,000, though it’s been surpassed; they have currently raised over $6,000. Aryze Developments pitched in to match donations as the fundraiser approached its goal.

Loughton says the huts can be established through contracts with the property owner and that they will use volunteers to facilitate and connect clients to services. They have already found a location for Alex’s hut.

“The property owner and Alex can figure out the parameters and terms around it. They’ll sign an agreement,” Loughton says. “If the government gets involved then we could do villages and it could be more permanent.”

According to CASA, Conestoga huts have been successful in Eugene, Oregon, where there are now 200 huts set up.

The reason these huts are desirable for someone like Alex is the fact that they’re private, elevated, and can be locked—resolving many of the issues that kept Alex out of shelters.

“I think they’re a good answer,” Alex says. “I can lock all my stuff and I don’t have to worry about it being stolen. I can also avoid the block [Pandora Avenue's 900 block].”

Despite the fundraiser’s success, Alex will still be out in the cold this week.

“I’m grateful, don’t get me wrong. But I thought the whole point was to house me before this freezing cold,” Alex says.

But next week, the forecast predicts lows of 1ºC overnight and an 80% chance of snow, rain and showers from Jan. 1, which, according to policy, would close EWR shelters.

As Alex says he’ll wait it out until 2022, another community response reveals itself: a fresh bowl of wonton soup from a passerby. The act of kindness brightens Alex's little corner on Government Street for a brief moment. At the risk of exclusion, he grabs a treat for Leeloo as well.