A lineup outside Costco in West Shore (Photo for Capital Daily by James MacDonald).

Capital Daily is part of the Trust Project
latestCOVID
TransportationBusiness
HousingGood News
A lineup outside Costco in West Shore (Photo for Capital Daily by James MacDonald).

September 28, 2020
Get the news and events in Victoria, in your inbox every morning.
Thank you! Your submission has been received!
Oops! Something went wrong while submitting the form. 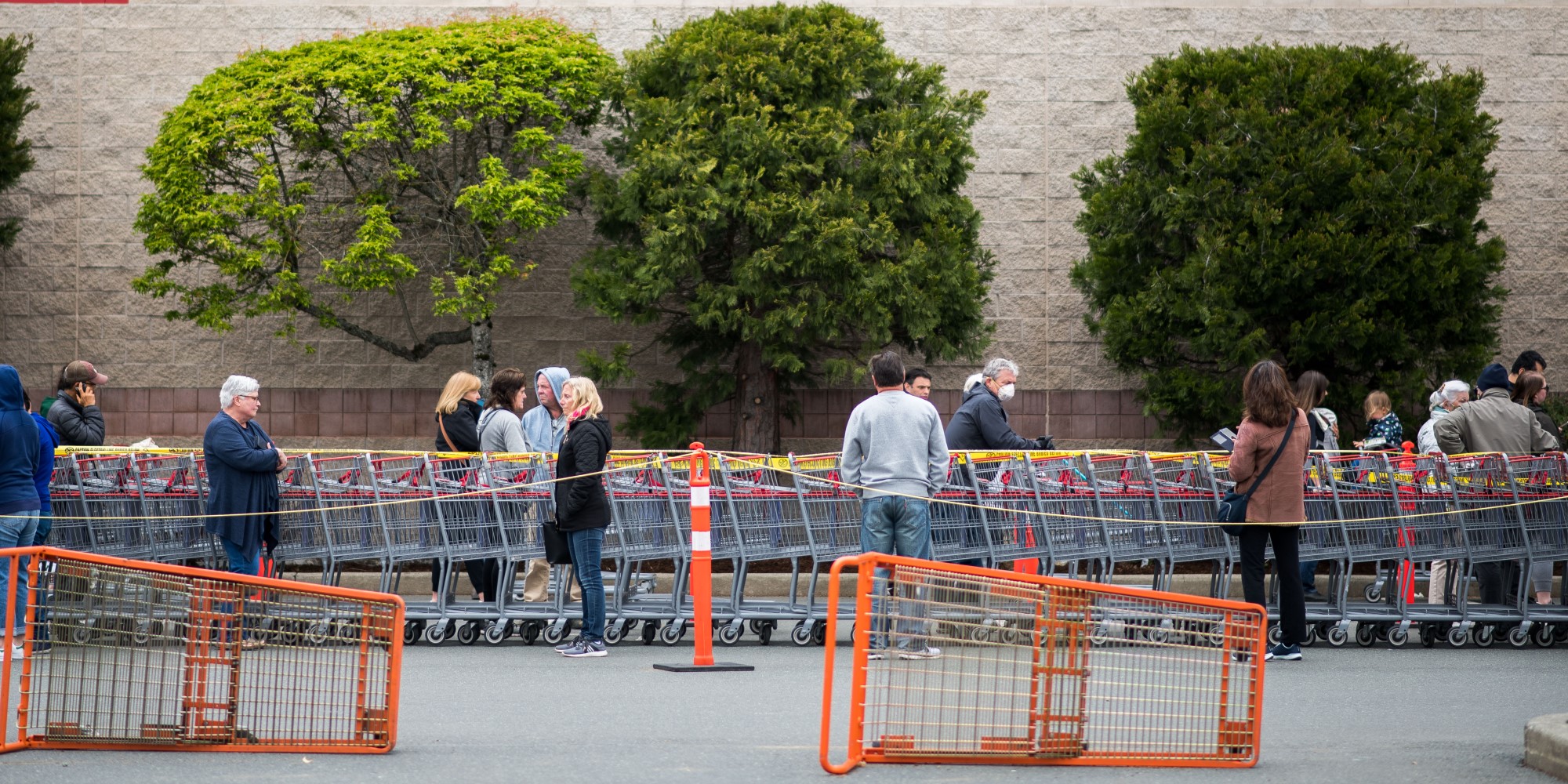 A lineup outside Costco in West Shore (Photo for Capital Daily by James MacDonald).

With more active COVID-19 cases than ever before, British Columbians are beginning to worry. According to a recent poll,61% of us think the worst of this pandemic is yet to come. But while the raw number of infected BCers may be on the upswing, in the feature below science writer Harley Gordon breaks down why this wave is much different (and much less deadly) than the springtime wave that first ushered in BC's COVID-19 lockdowns.

This surge is different from the initial one

We can all remember the feelings of uncertainty in March, as shelves in grocery stores emptied, restaurants closed, and schools suspended in-class learning. Today, we have more cases than ever before, but we’re not shutting down like we did in March. The province is in Phase 3 of recovery, and it’s likely to stay that way until there’s widespread vaccination, evidence of community immunity, or a successful treatment for COVID-19. Restrictions will be added if they’re required, like the recent one on late-night alcohol sales and nightclubs. But there are few circumstances in which we can expect a return to a full April-style lockdown.

There are many reasons this surge is being handled differently than the one in March. For starters, our healthcare system is better equipped to handle higher caseloads; we’ve learned how to better protect ourselves from the virus, and the health ministry has hired staff and increased funding in the fight against COVID-19. On September 9, Premier John Horgan announced a $1.6 billion funding injection into BC’s healthcare system, under which the province will be training and hiring around 7,000 healthcare providers for long-term care and assisted living homes. This is in addition to the 608 contact tracers the province began hiring last month. Contact tracers are professionals tasked with tracking down everyone who may have been exposed to COVID-19 and instructing them to wear a mask, pay attention to any symptoms, avoid being near vulnerable people, and get tested if they feel sick. These contact tracers do good work; contact tracing is an integral part of the public health strategy, and one that has proven effective.

Businesses are also far better prepared than they were in March. To remain open, they must implement extensive safety measures such as distancing requirements, mask mandates, plexiglass screens, and increased cleaning.

Finally, the public is also getting used to wearing masks and physical distancing. We know what needs to be done to keep ourselves and our community safe.

PPE stockpiles are growing, and we can better treat the most severe cases of the virus

There’s no longer a severe shortage of PPE, and stockpiles continue to grow. In the last week of August alone, BC received 151,000 N95 masks, 833,000 surgical masks, and 2 million gloves. The number of ventilators, a key piece of machinery in treating severe COVID-19 cases, is increasing. In the spring, the federal government ordered 40,000. As of mid-August, only 606 had arrived, but more are on the way, and 7,500 have been built and are waiting for Health Canada’s approval.

We’ve also learned how to better treat COVID-19. Only one drug, Remdesivir, has been approved for the most severe cases, but there is ongoing research into promising new treatments. Corticosteroids, like dexamethasone, have been shown to reduce mortality by around 25%. Although Dexamethasone isn’t approved for widespread use, Health Canada has recommended it for severe cases. Federal guidelines for clinicians treating COVID-19 are also regularly updated to include new information.

In this second wave we also have better knowledge of the deadliness of COVID-19— it’s less deadly than originally thought for people under 65 —and how certain risk factors, including cancer and diabetes, make it even more so. The risk to the elderly, however, is very high. In BC, people over 90 make up only 1% of the population, yet they account for a third of all COVID-19 deaths. The demographic with the most cases, ages 20 to 29, has yet to experience any deaths, though that’s likely to change as case numbers rise. The tragic death in August of a healthy 19-year-old in Montreal demonstrates that the young are also susceptible to the worst outcomes, but these instances are vanishingly few.

Even if the daily new cases continue to rise, the disease won’t necessarily spread out of control. If health officials know where someone caught COVID-19 and when, and who that person might have exposed, they can keep a handle on the spread.

The province publicizes a variety of data using a great tool on the BC Centre for Disease Control’s website, and it includes some of the key metrics that health officials use to make decisions. Here are a few things that are worth watching if you want to know whether COVID-19 is starting to get out of control in BC.

The percent of positive tests.
It remains low, but it’s slowly rising. On the 8th of September, 3.6% of people who were getting tested for COVID-19 actually had the virus. In April, the positive rate peaked at 8%. If the positive rate continues to rise, it indicates that there are unidentified cases and more silent spreaders. It may also mean that there’s not enough testing and that cases will start to be missed. Currently, around 80% of cases come from a known source of transmission. This means there isn’t widespread transmission of cases from an unknown origin, and public health aims to keep it that way.

The demographic of infections.
‍The recent surge of cases is affecting a different demographic than before, predominantly spreading now among those who are between  20 and 29 years old. In early April, the elderly were the most affected.

There have been 66 COVID-19 outbreaks in care homes, representing over 20% of them. These are the deadliest locations for COVID-19, and it’s up to us to prevent any more of them. Although British Columbians can visit loved ones in care homes again, these might be among the first places that see an increase in restrictions if cases get out of control.

The number of hospitalizations.
If hospitals begin worrying about their capacity to provide adequate treatment to every patient, restrictions may come back into place.

What the future holds

“We are keeping a fine balance,” said Provincial Health Officer Bonnie Henry earlier this month, “but we are on the edge.”

As we enter a so-called second wave of cases in BC, we’re reminded of the second wave of the 1918 Spanish Flu, which was the deadliest of three distinct peaks. The first wave came in March 1918. After a lull, it was followed by a dramatic spike in the fall. The third wave occurred in spring 1919, and while it was deadlier than the first, it was only half as deadly as the second. Capital Daily has covered the dramatic differences between COVID-19 and the Spanish Flu, but the timing is similar.

As we head into the fall and winter, we head into the flu, and possibly the new COVID-19, seasoned officials are expecting a spike in hospitalizations and deaths. Monthly deaths in the province often peak during December and January. Cold weather aids the spread of respiratory viruses, they can survive longer in the cold temperatures and low humidity. The summer sun and higher humidity contributes to a shorter shelf-life of the COVID-19 virus in the environment. Think of winter as a fridge. It keeps the virus from breaking down, both on surfaces and in the air. Secondly, people tend to spend more time inside, and in closer proximity in colder months. The lack of opportunities for physical distancing can of course increase the spread of disease.

However, vaccines are on the horizon. Canada has struck deals with four companies (Novavax, Johnson & Johnson, Pfizer, and Moderna) for millions of doses of their prospective COVID-19 vaccines. There’s hope that come the new year, while we’re still halfway through the flu season, we can start to receive COVID-19 vaccines and achieve the fabled herd immunity.

By filling out the form above, you agree to receive emails from Capital Daily. You can unsubscribe at any time.
Harley Gordon
,
EMAIL:
TWITTER:
contact@capnews.ca