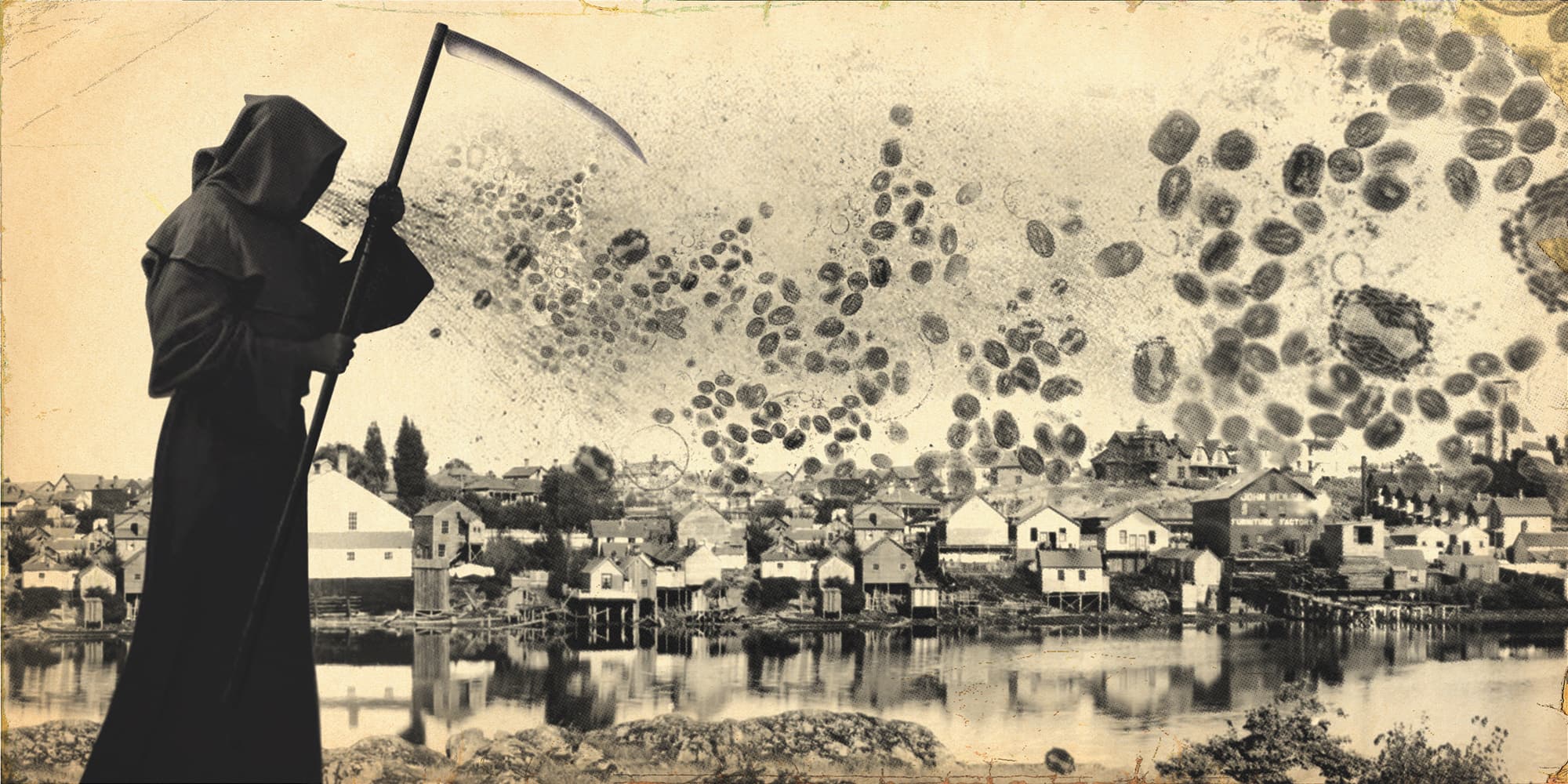 It would begin with a feeling of ice in one’s blood and weakness in the bones. Two to four days later, red sores would infest the mouth and throat, followed by rashes all over the face and limbs. Within a few days, the hard, round beads all over the body would be undeniable: Smallpox.

It was July, 1892, and Victoria was being visited by its last great outbreak of one of the most terrifying diseases in history. Even before the arrival of white settlers, smallpox brought to the West Coast via Indigenous trade networks had depopulated the land now known as Vancouver Island with apocalyptic fury. When George Vancouver first visited the Strait of Georgia in 1792, he encountered whole villages occupied only by skeletons.

It had returned in the 1860s in a devastating outbreak that would primarily affect First Nations. In Victoria, thriving native camps in what is now James Bay, Ogden Point, Laurel Point and Cadboro Bay were so decimated by the disease that they never recovered.

And now, on the eve of the 20th century, smallpox visited a modern Victoria to reap one last tithe of death. While the current COVID-19 pandemic usually draws comparisons to the Spanish Flu of 1918, it’s also given Victorians a chilling taste of what it was like to live through attacks of the now-forgotten disease that profoundly shaped Victoria’s earliest days—a disease so foul, it’s incredible that it ever existed outside the world of horror fiction.

“The rubbing of pajamas on [the] skin felt like a roasting fire. By dawn, the body had become a mass of knob-like blisters ... it felt as if the skin was pulling off the body,” wrote author Richard Preston in the 2002 smallpox history The Demon in the Freezer.

What has made COVID-19 so dangerous is that it can be spread by people who do not even know they’ve been infected. Smallpox, by contrast, only became contagious after symptoms had begun to appear, such as sores in the mouth and throat. Once smallpox struck, however, it was far deadlier than even the highest mortality estimates for COVID-19; roughly one third of smallpox patients died.

No population on earth was immune from smallpox. Over thousands of years it has filled mass graves everywhere from India to Iceland. But it would strike hardest against the Indigenous peoples of North and South America. The disease and the resulting social collapse it brought to Indigenous societies dwarfed the carnage that the Black Plague had wrought on Medieval Europe. Some groups suffered smallpox-related mortality rates of upwards of 90%, and the disease is considered by many historians to be the singular reason why European colonists were able to quickly become the dominant population in North America. With smallpox having decimated Indigenous societies from Haida Gwaii to the Aztec Empire, there were few left to oppose the new settlers.

Victoria’s 1892 panic had started with smallpox reports emerging out of Vancouver. Just as with COVID-19, it had come out of Asia, travelling across the Pacific on Empress steamers from China or Japan; Vancouver’s first case had been a first class passenger on one such sailing.

Fear escalated in June when ​The Vancouver World ​published a false rumor that nine people in Victoria had contracted smallpox. ​The Daily Colonist ​ responded to this almost mockingly, stating that only “[t]wo patients who were supposed to have the disease in its mildest form, have been removed to the Quarantine station at Albert head.” Still, after reports of more cases in Vancouver and Nanaimo, it seemed only a matter of time before smallpox crept its way into the BC capital.

In truth, however, it already had: On May 28th, Harry Farrer, a dock worker, reported his illness to the current health officer. Most worrying of all, Farrer’s case had been what we now call a case of “community spread.” He had no direct connection with any recent steamship travellers, indicating that whoever had infected him might have infected others.

Soon after came more: Two children, then a Mr. Burrows and a Mr. Niles. A Mr. Eckert, Mr. Foster, Mr. Marsh, Mr. Williams, Mr. Waitt; in hardly more than a month, smallpox had infiltrated over ten unsuspecting victims. It was a slow start, but just as the world has learned in recent weeks, in the world of infectious disease 10 cases can rapidly balloon into thousands.

Fatalities also began to mount quickly. A child was the first to die in early July, then Waitt and Burrows. By July 9th, with every day yielding a new batch of cases, a provincial health officer, Dr. J.C. Davie, was appointed to rein in the outbreak.

Unlike with COVID-19, there was a vaccine. Smallpox, in fact, had been the first disease to receive a vaccination in the late 1700s, but in 1892 Victoria there was still a substantial unvaccinated population in which the disease could gain a deadly toehold. “Lulled into confidence by years of immunity, a large proportion of the inhabitants had neglected the well-known prophylactic,” reported a subsequent royal commission on the outbreak.

Doctors at the time expressed their frustrations with “anti-vaccinationists.” The existence of anti-vaxxers and fake news are not the only parallels between 1892 and 2020, however.

In the present day, when most envision nineteenth century medicine, they likely picture doctors with no education on germ theory sawing off limbs with unsterilized tools, and flies feasting on infected wounds. However, the 1890s were much more advanced than many realize. Books about the era will discuss daily washing routines performed by all social classes. Louis Pasteur had confirmed germ theory in the 1860s, and a tour of Victoria’s own Craigdarroch Castle will prove the existence of flushing toilets in the 1890s. What’s more, given the rudimentary methods we have to fight COVID-19, Victoria of 128 years ago responded to smallpox with many of the same precautions as today.

Public places began closing their doors, first to anyone who had had contact with smallpox victims, then to everyone. Notices appeared in the ​The Daily Colonist ​of cancelled church services and postponed picnics. A melodrama titled ​The Fast Mail ​that was scheduled to appear on stage on July 9th announced that it would not perform in Victoria because “the management[,] hearing that there were several cases of smallpox here [in Victoria], considered that it would injure their business elsewhere if they played the city.”

On July 9th, ​The Daily Colonist​ reported that Nanaimo’s city council had prohibited anyone older than three months who was not immune to smallpox (either by vaccine or having already survived the disease) from living within the city. Trains and steamboats were to be stopped outside of Nanaimo and checked by the health officer before passengers could proceed into the city.

A meeting between medical professionals and members of the government was held, where they discussed the urgent need to catch up with the disease as it threatened to stretch its way further into Victoria. As it is wont to do, hindsight taunted the group and sparked heated monologues about what was not done sooner. The matter was so pressing that attendees were willing to take immediate action even if it meant overstepping their authority. Victoria’s soon-to-be appointed health officer, Dr. Davie gained a round of applause for declaring to the others,“I tell you plainly and on my own responsibility, that the best way of dealing with the smallpox is for us to take it up and see it through.”

In recent days, BC health authorities have cancelled all non-emergency surgeries in a scramble to free up hospital beds in the province’s overcrowded hospitals. The Victorians of 1892 responded similarly with two dedicated quarantine stations—one for confirmed victims of smallpox on the grounds of the Royal Jubilee Hospital and one for suspected victims in Ross Bay. Notably, at the time Victoria’s substantial Chinese-Canadian community requested their own separate quarantine station. The reason? In an era of widespread and unconcealed racism, they did not trust white doctors to treat them with equality and even threatened to conceal their symptoms until a segregated quarantine station was granted.

With COVID-19, nobody is entirely sure when we’ll be able to safely dial back strict social distancing measures, with some estimates saying they may persist into late summer. In 1892, however, they were out of the weeds within weeks, and announcements for events began to reappear in the newspapers in August. On August 6th, The Daily Colonist announced, “The Scare is Over. On August 20th, the provincial health officer assured British Columbians that the only remaining cases were confined at the Royal Jubilee Hospital.

BC had dodged a bullet, particularly so among West Coast First Nations. Only 35 years after an apocalyptic outbreak had chewed through coastal villages, this latest outbreak had primarily struck white victims. This was also the last time that BC would be placed into a pitched battle with the disease. Smallpox would go on to kill another 300 million people in the 20th century before it was finally eradicated in 1978 at the tail end of an aggressive worldwide vaccination campaign.

But this wasn’t known to the Victorians of 1892. Just as smallpox had threatened the city since its inception, it was assumed that it could return at any moment. That is perhaps the most unnerving parallel between COVID-19 and smallpox.

This current onset of coronavirus is only the latest incarnation of a family of viruses that were also responsible for SARS and the 2012 outbreak of Middle East Respiratory Syndrome. Whenever Victoria eventually returns to normal life, just like in 1892 it will do so with the knowledge that this could all happen again.