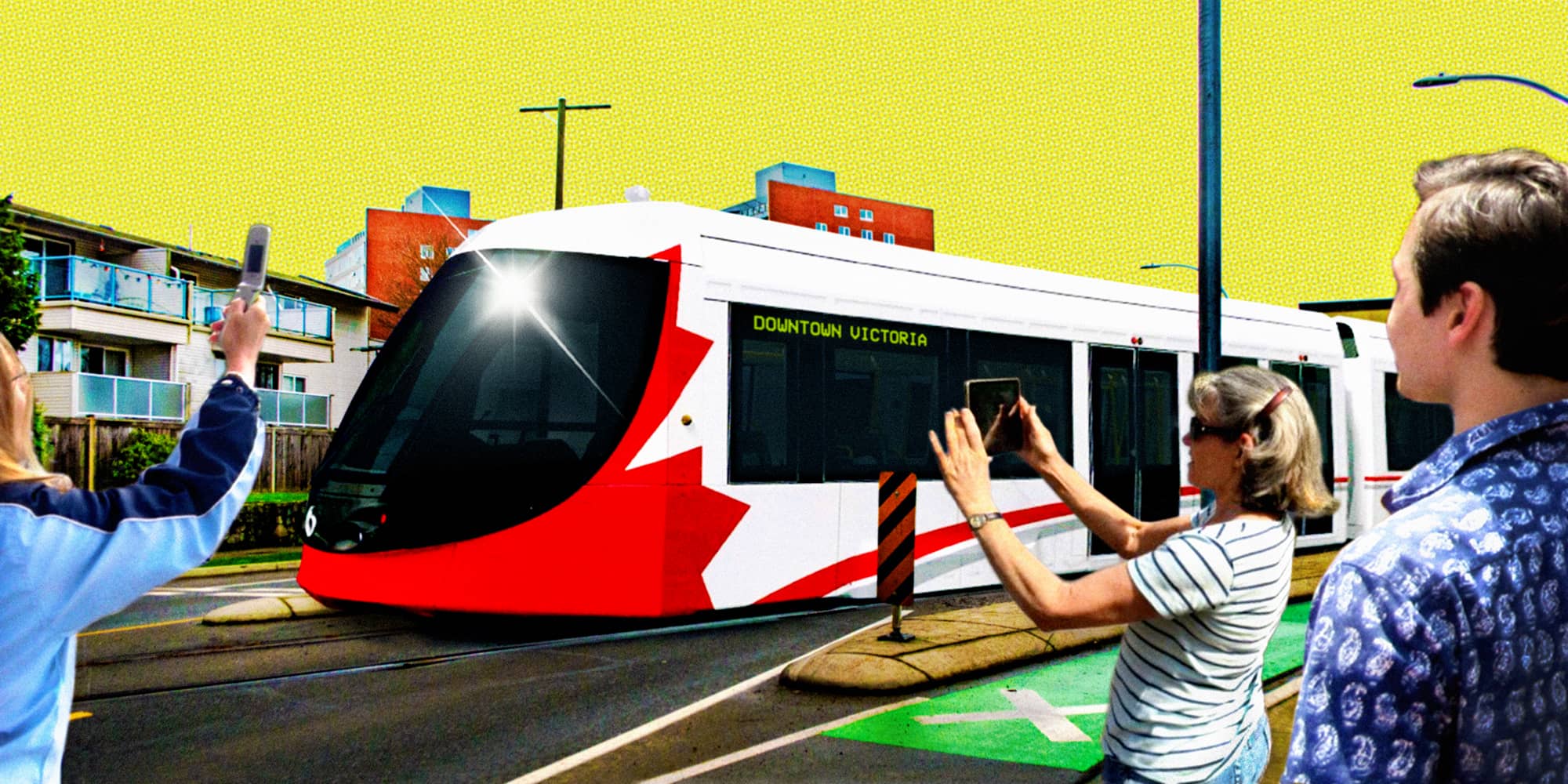 It’s 4:30 pm on a weekday and you’re sitting in bumper-to-bumper traffic leading north out of Victoria, thinking there’s got to be a better way. What is normally a 15-minute drive to Langford has swelled to more than 50 minutes, with 15 kilometres' worth of cars backed up clear from Goldstream Provincial Park to Mayfair Shopping Centre. And that’s if this isn’t one of the half-dozen or so days each year when a crash has closed the Malahat outright, transforming the whole region into an unspeakable all-night götterdämmerung of congestion.

Larry Stevenson, CEO of the Island Corridor Foundation (ICF), imagines a different scenario. One in which a commuter could hop aboard one of four trains running during peak times out of Vic West, enjoy an espresso while scrolling the headlines, then arrive 28 minutes later in central Langford. No more jockeying for urban parking spots, or blood pressure-raising traffic jams.

These days the average commute from Mill Bay to Victoria takes between 43 and 66 minutes, according to the South Island Transportation Strategy, released in September. By 2038 that same drive is expected to take a gruelling two hours and 24 minutes on a bad day. The reason for the congestion is simple: As subdivisions and bedroom communities sprout up throughout West Shore and the Cowichan Valley, all these new residents are clogging the same stretches of blacktop in single-occupancy cars. Approximately 24,600 vehicles travel the Malahat daily and a survey of Greater Victoria commuters found that nearly 60% of respondents are doing the slog alone in their cars.

“Nobody is talking about cars as the way of the future for transportation. The Malahat will continue to be a problem so I would much sooner see investment in rail than to see more road blasted out of Goldstream park,” Langford City Councillor Lanny Seaton told Capital Daily. He noted that Langford’s condo and apartment developments are clustered in close proximity to the rail line, making commuter rail a natural fit.

It’s why, during the recent provincial election, ICF billboards were placed at strategic points along Highway One boasting  “if we had a train, you could be home by now.”

The ICF is a non-profit society with a board representing 14 municipalities, five regional districts and 14 First Nations. It has owned all 300 km of the Esquimalt & Nanaimo Railway (E&N) since  2003, when it acquired the line for free from the Canadian Pacific Railway. Its annual budget (roughly $650,000 in 2019) comes mostly from Telus, which leases E&N land for a fibre optic cable.  Otherwise, ICF has mostly been managing a rusting, overgrown stretch of rails and condemned trestles. It’s been a decade since a passenger train rattled down the tracks, and even when it did, the service was nothing close to being a sustainable transport option. At the time the Via Rail-operated Dayliner could take five hours or more to make the journey from its northern terminus in Courtenay to Downtown Victoria and the schedule was awkward.

But the ICF contends that, with some substantial renovations, the 135-year-old railway could find new life as a commuter line, as well as for freight traffic along the trunk lines to Port Alberni and Duke Point in Nanaimo. “We could have commuter, inter-city and excursion service for between $350 million and $400 million. If the motto right now is to ‘build back better’ then this is a shovel-ready project,” Stevenson says.

The E&N stretches 225 km from Courtenay to Vic West, with a spur to Port Alberni and another to the Seaspan terminal in Nanaimo where more than half of Vancouver Island consumer goods arrive via container ferries. The line has definitely seen better days. According to a Ministry of Transportation and Infrastucture study released last fall, the line’s many rusted-out bridges need repair, the gravel railbed is eroded in places and brush is overgrowing the rails. The study, conducted by engineering consultant WSP, estimated that full revitalization of the line could cost  $730 million. Establishing commuter rail service between Langford and Victoria, complete with six stations and new rolling stock, would cost just under $600 million.

Bringing back the E&N is not a new idea, and it has its sceptics. As a Langford man who commutes regularly to Downtown Victoria, Premier John Horgan is right within the demographic poised to benefit from a commuter line. And yet, as he told the Victoria Chamber of Commerce in May, 2019, the business case for rail wasn't there and that "we shouldn't have a corridor like that designated for growing Scotch broom." Instead he touted converting the railway right-of-way into a designated bus route.

Though the ICF touts partnerships with First Nations as key to driving island rail forward, support for the concept is far from unanimous among the 14 nations through which the tracks pass. Late Esquimalt chief Andy Thomas went on record saying that the E&N is an obstacle to land development, and that he would like to see the tracks torn up and the land returned. And last summer the Snaw-Naw-as First Nation of Nanoose Bay argued in BC Supreme Court for the return of land that they say was stolen when the E&N was constructed more than a century ago.

Trains could move people efficiently between the six proposed commuter stations in Greater Victoria, but without well integrated bus connections to UVic, Uptown and other destinations on the peninsula, it might be tough sell getting people out of cars.

Stevenson is a career railroader, having worked his way up from the marshalling yards to the executive offices at Canadian National Railway. He doesn’t dispute WSP’s poor assessment of the line’s stations and rails, but says the consultant’s recipe for revitalization calls for a line that is “way overbuilt," and hence more expensive, than what the island requires.

He believes the E&N has struggled to gain traction with politicians because, while governments have no qualms throwing small fortunes of taxpayer money at road infrastructure, it’s a completely different story when it comes to rail.  "The fact is the province’s solution to transportation issues has typically been to lay down more asphalt," Stevenson says. For example, taxpayers just shelled out $96 million for the McKenzie Interchange Project, a price tag that grew by $11 million during construction. In Metro Vancouver, replacement of the Pattullo Bridge linking New Westminster and Surrey will cost $1.4 billion.

Ironically, the E&N was born as a piece of heavily subsidized government infrastructure. Seeing the line as the last link in its promise to knit Canada together with rails, the federal government of then-prime minister Sir John A. Macdonald kicked in $100,000 per year (nearly $3 million in today’s dollars) to subsidize construction, and the province later agreed to grant $750,000 ($24 million today) and 8000 square kilometres of island land to whichever company built it. Industrialist Robert Dunsmuir took on the railway project and was soon the beneficiary of one of the most sweetheart deals in BC history. The line was sumptuously financed by government, primarily served his coal fields, and also handed him one of the biggest land grabs in Canadian history.

WSP is not the first consultant to conduct a government-funded study of this embattled rail line. In 2011, IBI Group conducted an assessment of the E&N based partially on earlier reviews in 2003 and 2006. The study pegged the cost of rail renewal at between $70 million for simply preserving the line, and $216 million for infrastructure upgrades and new rolling stock. As the studies pile up and gather dust, the cost of bringing the railway back to life keeps increasing.

Meanwhile, even as transit expands across Southern Vancouver Island, the E&N is not on anybody’s drawing board at the official level.

The Province's South Island Transportation Strategy, released in September 2020, is lukewarm on rail at best, making a vague commitment to “exploring the potential for commuter rail on the Island Rail Corridor between Westhills and Victoria.”  Stevenson calls it a “plan without a plan.”

Susan Brice, chair of the Victoria Regional Transit Commission, told Capital Daily in an email that “the future use of the corridor is yet to be determined.” According to Todd Litman, founder and executive director of the Victoria Transportation Policy Institute, betting on buses is a way better plan than renovating several hundred kilometres of overgrown rail line. "My analysis indicates that frequent bus services would probably provide much greater benefits than rail transit, since buses could be implemented more quickly, have far lower costs and therefore fares, would be far more frequent and directly serve many more destinations," Litman says

Still, it’s a project that continues to capture the imaginations of more than just railroaders like Stevenson. Last September, an ICF-sponsored survey  of nearly 3000 Islanders saw 81% of them supporting revitalizing and modernizing the railway.

“It makes sense to utilize what we already have in place, especially if I could get from Duncan to Victoria in an hour by train,” Duncan mayor Michelle  Staples told Capital Daily in a phone interview. It’s also a view shared by the area’s Indigenous leadership. Chief William Seymour of Cowichan Tribes said he supports the  potential economic benefits from being able to use rail to ship resources like gravel up and down the island.

In North America, at least, the track record of converting historical rail lines into effective light rail is not good. The needs of 19th century freight railways so rarely intersect with those of 21st century commuters that the typical fate of disused right-of-ways is to convert them into cycle paths. This is true of Victoria's Galloping Goose Trail, which was built atop lines that had originally served gas-powered passenger rail in the 1920s.

But the long and winding saga of the E&N railway continues. Mothball the line and Stevenson doubts that Vancouver Island's traffic-weary commuters will ever see rail again. He says to acquire the land and build a railway on Vancouver Island from scratch would be cost prohibitive. "We have a problem on the South Island with traffic today, we'll have a massive problem in 50 years," Stevenson says.